Monument To A Moment 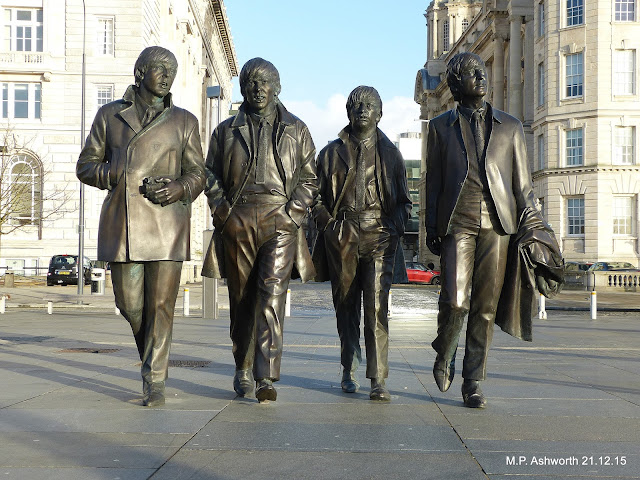 On Friday 4 December 2015 in a short ceremony a new statue of the Beatles was unveiled at the Pier Head in Liverpool.  I popped down a few days later to get some pictures.

Liverpool already has several Beatles' themed statues and sculptures of varying quality. I was impressed not only by the size of this new one, about 7 feet high and 1.2 tonnes, but by how the sculptor had captured some pretty accurate likenesses of the individual Beatles. In this respect it stands head and shoulders above our other group statue in the Cavern Walks.


The idea for the new statue came from Chris Butler, the managing director of Castle Fine Art Foundry Ltd which has a studio in the city.

He was inspired walking through the new Liverpool ONE shopping centre (few can claim that) telling the press that "I had this strange sort of feeling, the first time I walked through Liverpool ONE when it opened back in 2008. It was so big it felt almost like it had been dropped into the centre of the city. For years we’d seen the cranes and we’d seen the models but, all of a sudden, bang, Liverpool ONE was there. At first I felt like I could be anywhere. Then I walked up those steps by HMV and there was this huge photograph of The Beatles walking down the streets. That picture said “You’re in Liverpool”. I thought that would be a fantastic concept for a Beatles statue” The picture (above) was used on the Beatles "On Air - Live At The BBC Volume 2" album and was taken outside the President Hotel in Guildford Street, near Russell Square in London on 2 July 1963. Liking the pose but wanting to make the statues more "Liverpool",  Butler decided to sculpt the Beatles in the attire they wore when they were photographed at the Pier Head on 19 February 1963 by Michael Ward (see below) 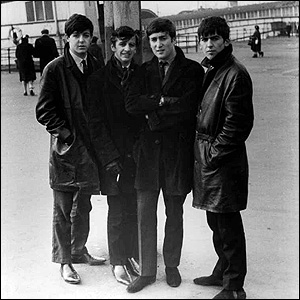 Blame my OCD, but I couldn't help notice that the statue places the group in a different order to the HMV photo, and Ringo seems to have been pushed to the back. There's a reason for this and another indication of the attention to detail that went into the project: “If you look at the order (The Beatles) are standing in, in the picture outside HMV we’ve actually moved them around (for the statue it goes Paul, George, Ringo John). This actually replicates the order they would be in on stage. Paul and George would share a mic, John would be on the other side and Ringo behind. They’re all walking and basically on the same step but all slightly out of step. The only hands in the sculpture are Paul’s left hand and John’s right hand”. (Which are the hands John and Paul used to play their respective instruments - a subtle touch)

The sculpture was funded by the Cavern Club and generously gifted to the city. Visitors to the August 2015 Beatle Week were given a sneak preview of the work in progress when the completed sculpture's of John and Paul, and representations of George and Ringo were displayed at the Adelphi Hotel (and removed before I remembered to take a photo).

Speaking at the unveiling, the Cavern’s managing director Bill Heckle said: “It has been an unbelievable experience to witness the transformation of this city since Cavern City Tours was incorporated in 1983. It bears little or no resemblance to the forward thinking vibrant and world-class city that now stands before us. It has been undeniable that tourism has been an integral and driving factor in the renaissance of Liverpool and its most famous four sons have played a pivotal role in bringing people here. We’re proud that we have been able to finance this project on behalf of fans from all over the world.”

The unveiling on 4 December 2015 coincided with the 50th anniversary the following day of the Beatles last concerts in their home city when they played the Liverpool Empire on 5 December 1965 and who better to perform the unveiling than somebody who was at that final concert, John Lennon's sister Julia Baird.

I  know John would have loved it. And I bet Paul comes to see it as soon as he comes back here. The statue stands in loving memory of the best band in the world - the band that leapt from The Cavern stage to worldwide recognition. The timing reflects the 50 years since The Beatles' final public appearance in Liverpool on December 5, 1965. I was present at that event and am proud to be at the unveiling.” 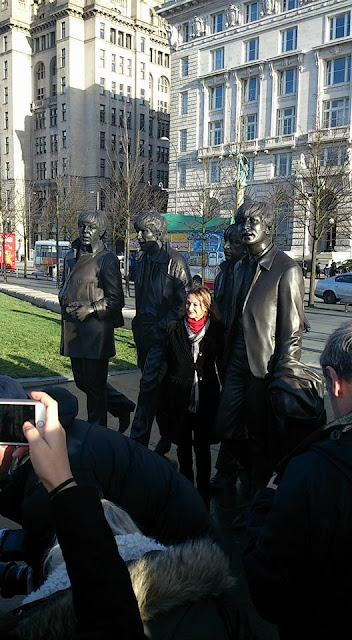 Julia was accompanied by Liverpool deputy mayor Cllr Ann O’Byrne who said she was "delighted" to see the new statue: "Talk to anyone in or outside the city about our history and you can guarantee The Beatles will get a mention, so it feels right that this sculpture of these iconic men stands proudly on our iconic waterfront."
Justifiably proud, sculptor Andy Edwards said “I feel glad for the people of Liverpool. It’s they who demanded this statue – it’s not like we pushed. They pulled, and we just channelled that. I can remember walking around the waterfront with the original sketch models and everybody wanted to talk to us, (it seems) everybody has a Beatles story. Our image of them seems to bring past, present and future together, like a time machine.  I think the statue will quickly become a place of ritual. It will be a place to come together, have a think, meditate and play.”

It was already doing the business when I visited, groups of visitors patiently waiting their turn to be photographed with them.

Friends present at the unveiling told me to look out for some little touches on each of the statues, a talisman specific to each member of the band.

In 1969 John and Yoko sent acorns to world leaders, requesting they plant them as a symbol of peace. It was decided to cast two acorns on the palm of John's statue as an everlasting reminder of their peace campaign. Quite unintentionally another link was forged as Chris Butler explained: “We’d been looking for acorns but couldn’t find any. Anyway I was in New York in Central Park and I remembered about the acorns". Close to the Dakota Building where John lived (and was shot outside in 1980) Butler happened upon some Oak trees. Picking up a handful of acorns he brought them back to Liverpool where two were added to the sculpture. 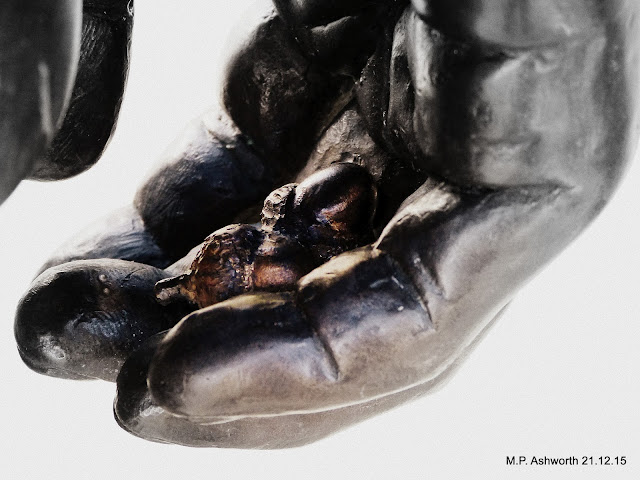 "So the two acorns in John’s hand are from outside The Dakota building. They’re different from English acorns.”
A statue in John's birthplace acknowledging the city where he died. 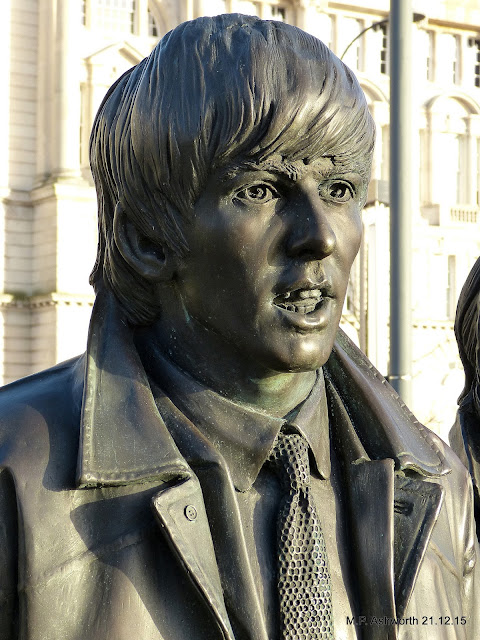 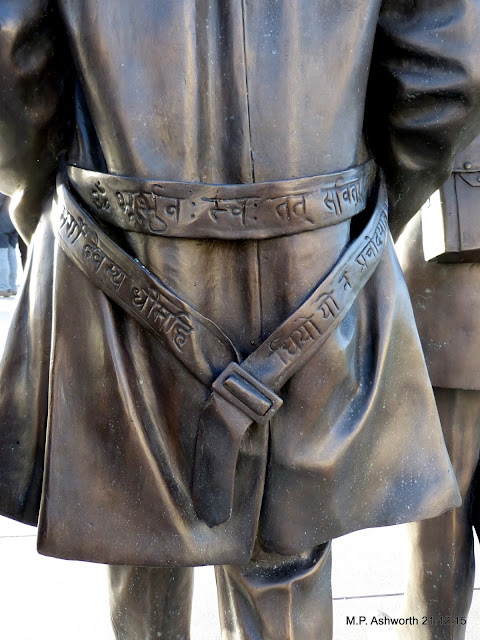 In recognition of George's spiritual beliefs the back of his statue has an Indian mantra inscribed on his belt. 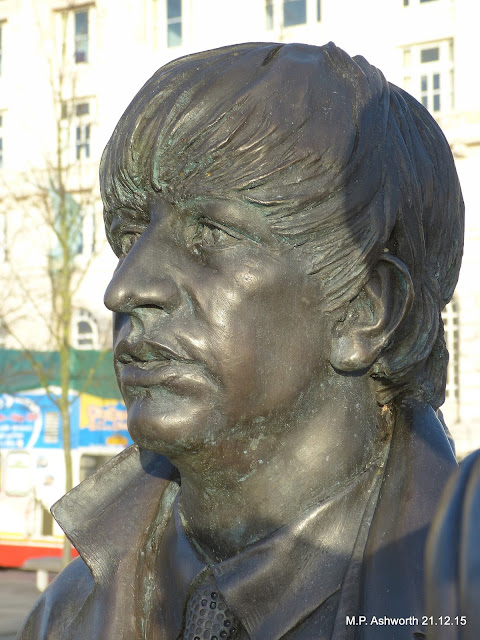 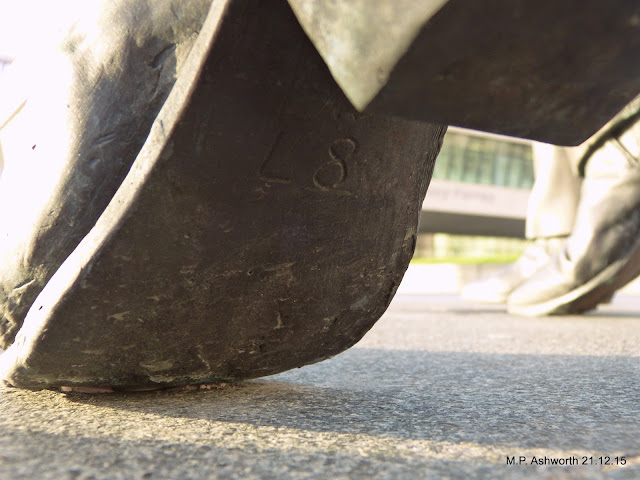 Ringo's talisman is both a nod to the postal district of where he grew up in Dingle and his 2008 album but it's not easy to spot. If you can crouch low enough behind his figure you may just be able to make out "L8" on the sole of his boot.  I've no idea if the real Ringo has size 8 feet but that would be a nice co-incidence. 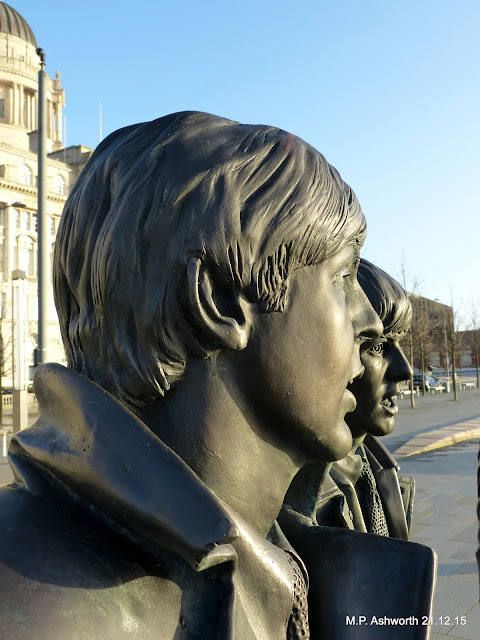 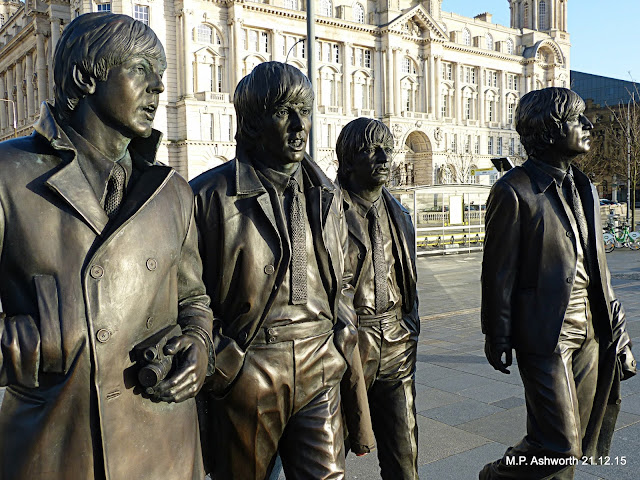 The sentiment behind Paul's motif is a nice one but some have criticised the execution. Paul is supposedly carrying a camera and camera bag referencing Linda's love of photography. However the sculpture appears to holding a cine-camera which I suspect was copied from photographs of the Beatles in Paris in January 1964. A small gripe on what is otherwise a superb piece. 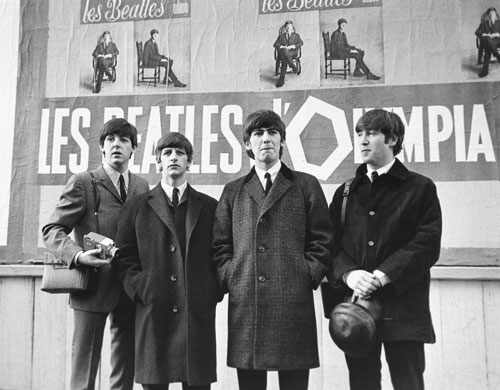 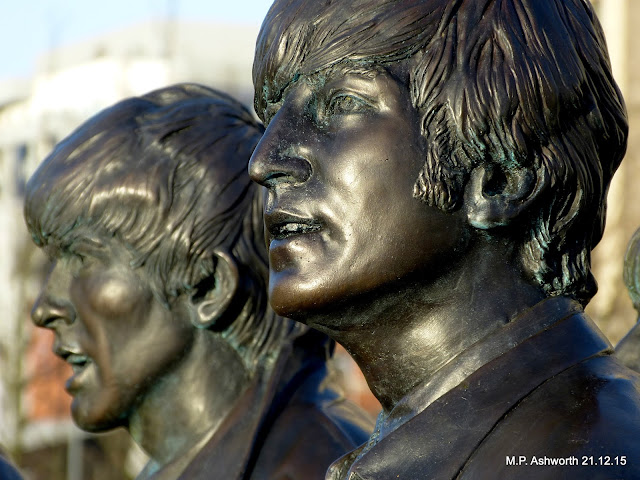 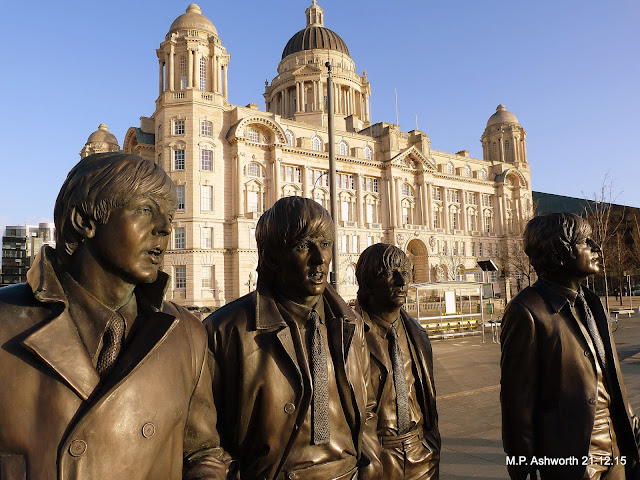 The Port of Liverpool Building (above) provides a stunning backdrop to the statues, as does the Royal Liver Building. 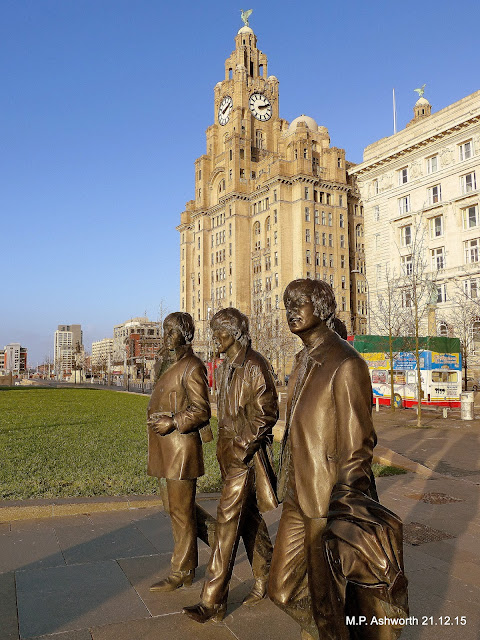 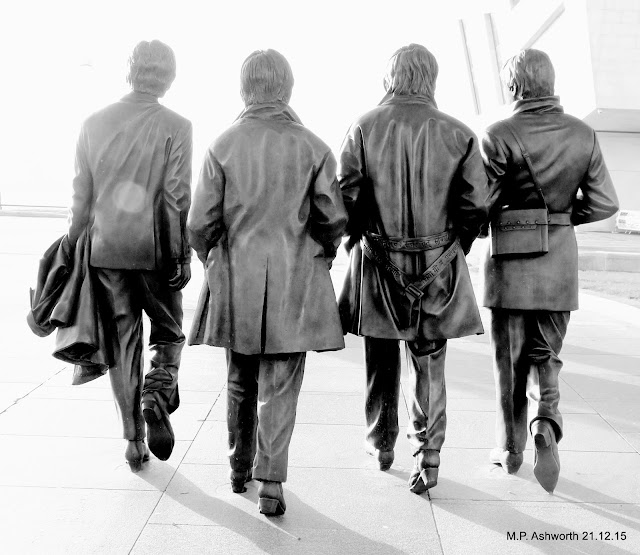 "This is a statue that needs no title, no explanation, no instruments, no gimmicks. It's a monument to a moment and the moment started in Liverpool." (Chris Butler)

Photos of the unveiling ceremony appear on the Liverpool Echo website: http://www.liverpoolecho.co.uk/news/liverpool-news/beatles-statue-unveiled-liverpool-waterfront-10548540 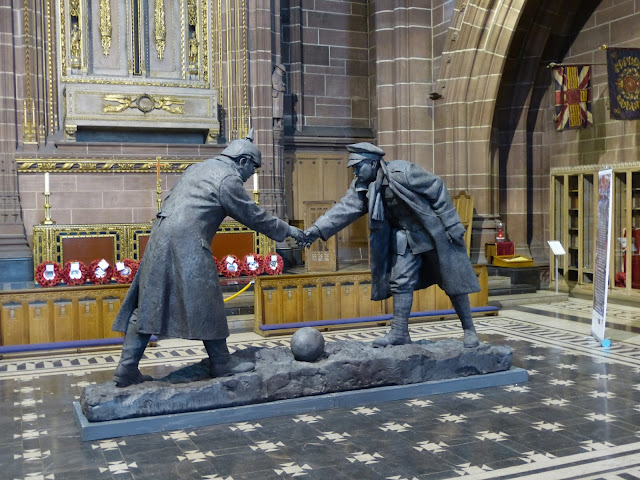 This is the website for Castle Fine Art Foundary. You can see some incredible pieces such as their statue to commemorate the 1914 Christmas truce as well as icons such as Mohammed Ali, Amy Winehouse etc here:
http://www.bronzefoundry.co.uk/News/NEWS.html
Praise and Thanks to JC for the two photos from the unveiling ceremony.
at January 23, 2016 2 comments: