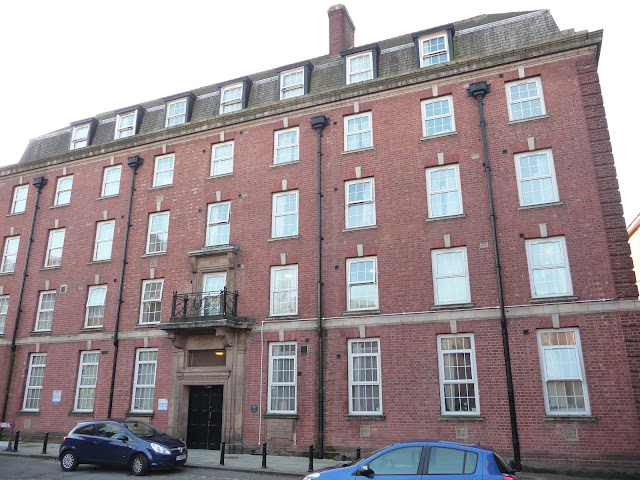 As John later explained in his 1964 book In His Own Write:

"I was bored on the 9th of October 1940 when, I believe, the Nasties were still booming us, led by Madolf Heatlump (who only had one). Anyway they didn't get me."

Julia's eldest sister, Mimi, phoned the hospital and was told that she had given birth to a boy. According to Mimi, she went straight to the hospital during the middle of an air raid, and was forced to hide in doorways to avoid the shrapnel from falling bombs. She ran, as she later recalled, "as fast as my legs could carry me".
In fact, contrary to Mimi's vivid recollection, the Luftwaffe were NOT over Liverpool that night. The previous bombing raid had been on the night of September 21, and the next was not until October 16. Throughout the war, the port of Liverpool was Britain’s lifeline; her strongest connection with the free world.  Both civilian and military supplies were brought into Liverpool's docks through the convoy system. Across the Mersey,  Birkenhead was vitally important for naval repairs and shipbuilding.  Unsurprisingly then, this made the entire Mersey waterfront the primary target outside of London for the German bombers. It seems that Wednesday October 9 1940 was a rare moment of tranquility in the midst of a sustained bombardment which had commenced on 28 August 1940 and continued regularly for the rest of the year.

Julia had been in labour for almost 36 hours when the blonde haired seven 1/2 pound baby "with beautiful eyes and long lashes" arrived. John's father Alf was not present at the birth, as he was at sea aboard the Empress of Canada. 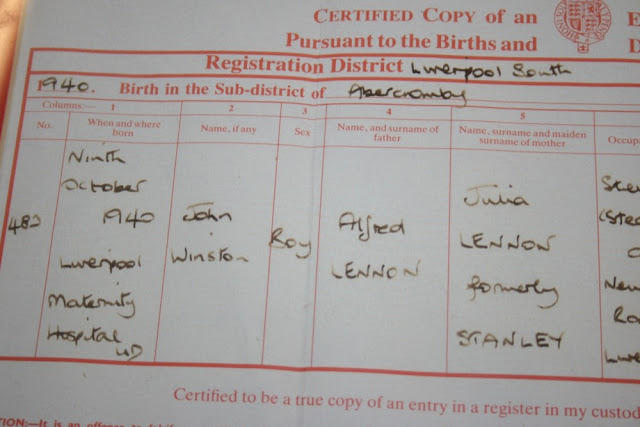 Alf did not return to Liverpool until 1 November, the city undoubtedly looking much different from when his ship had left port. Ten days later, Alf registered John's birth at the Bolton Street Registry office, the same place where he'd married Julia in December 1938.
Some say that the name John was suggested by Mimi, she may have had her own reasons for doing so, but Alf no doubt had the final say over his sister-in-law, claiming that John was named after his paternal grandfather, John (Jack) Lennon, Alf's dad, and took his middle name from the then current British Prime Minister, Winston Churchill of whom Julia was a big fan. 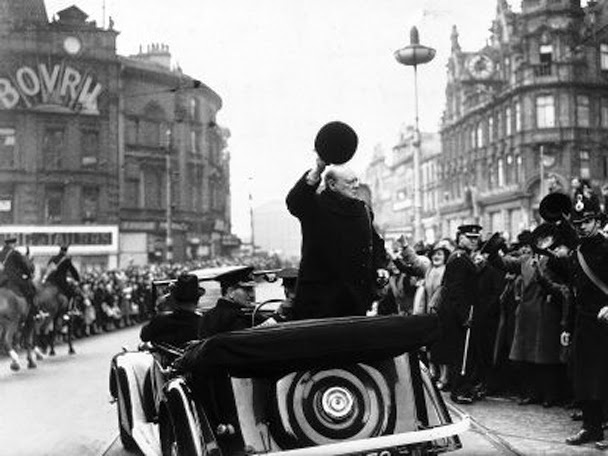 Winston Churchill outside the Adelphi Hotel, Liverpool on a morale boosting visit to the city on 25th April 1941, just days before the most intense week of the Luftwaffe bombing campaign began. The Vines public house is on the right.

The night of the 3-4 May was the worst night of the war for Liverpool. Between 10pm and 3.40am, 298 German planes attacked the city.

The much loved Lewis's Department store just out of camera near the horses on the left hand side of the above photograph was hit. Oil bombs were used and embers spread the fire to the Blacklers store in Great Charlotte Street which was also lost as was much of the surrounding property including the building advertising Bovril on the corner of Lime Street facing the Vines public House.

Julia and Alf Lennon celebrated at the Vines (aka "The Big House") following their wedding in the nearby Bolton Street registry office on 3 December 1938. 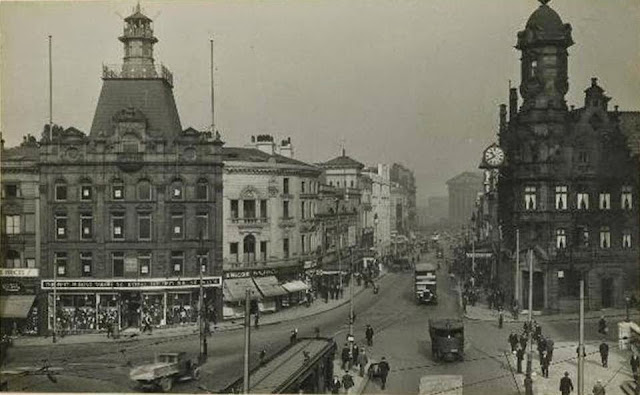 Looking down Lime Street from Ranelagh Place, pre- 1941. Everything to the left of centre was destroyed and rebuilt, and with little attempt to replicate the symmetrical quality and stature of the surviving buildings (see below). 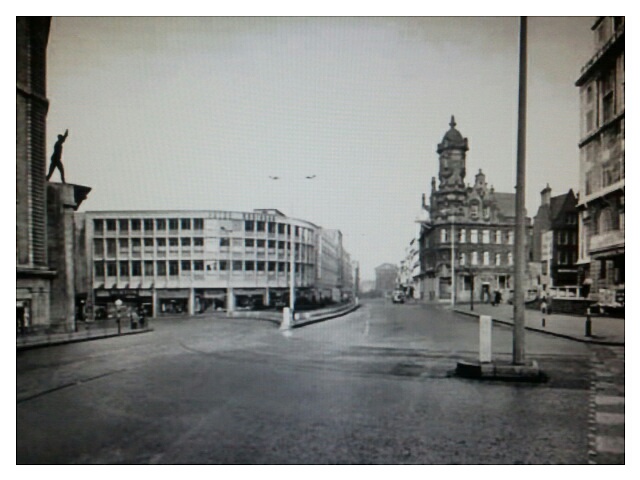 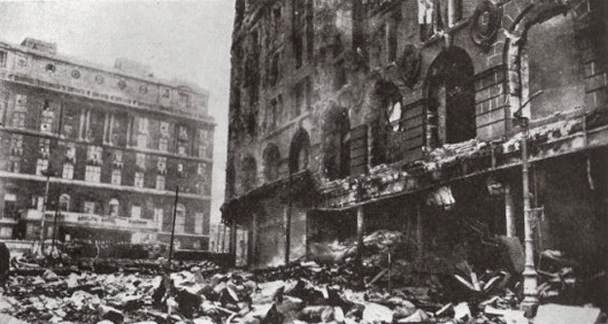 Lewis's viewed from Ranelagh Street, 4 May 1941 with the Adelphi Hotel on the left.
Oxford Street Maternity Hospital in photographs, then and now: 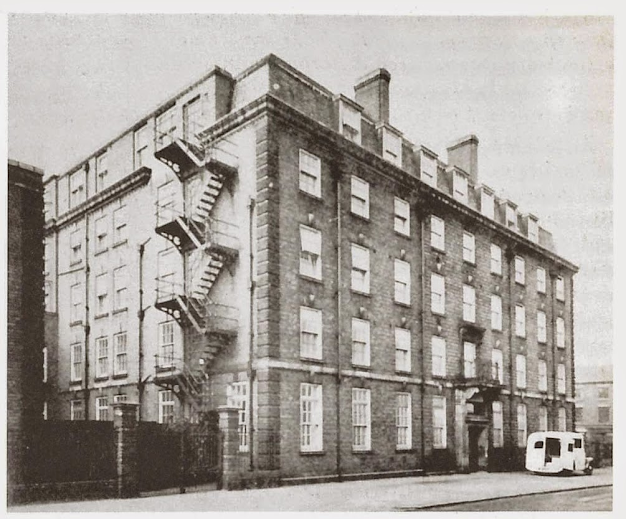 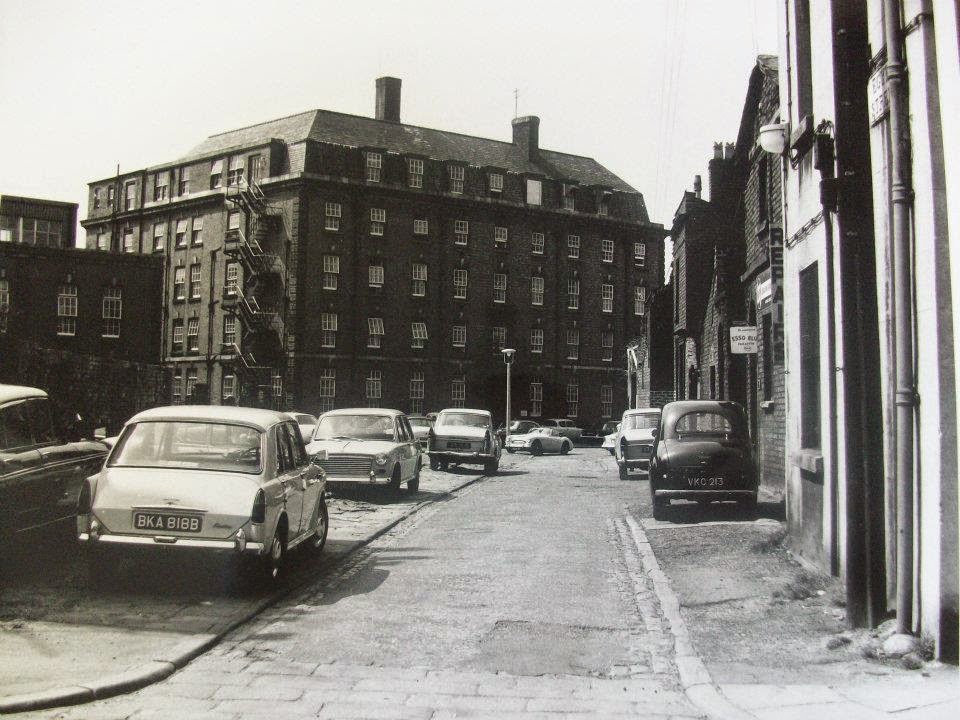 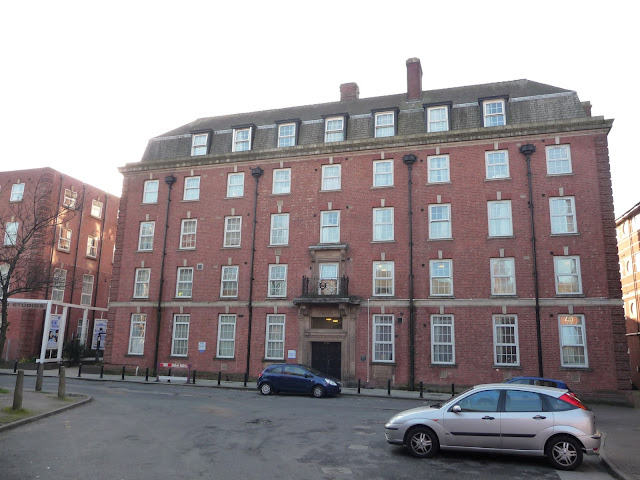 In 1796 a group of public-spirited Liverpool ladies realised something was lacking for the female population of the rapidly developing port. They accordingly set up a charity to provide medical care and assistance with childbirth to ‘reputable married women and widows resident in the town’.
This early example of specialisation did not operate in a hospital, but took doctor and midwife services to patients’ homes. It carried on its valuable activity independently for almost 90 years.
About half-way through that period, perhaps prompted by the Ladies Charity efforts, the council opened its own Lying-In Hospital. The two organisations ran side by side for decades, until the overlapping capabilities were amalgamated into the Brownlow Hill Lying-In Hospital in 1884. 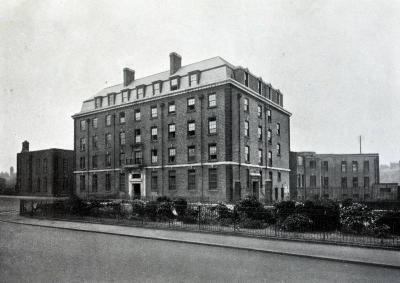 The Maternity Hospital shortly after opening

Liverpool 'officially' became a city in 1880, although it had actually been a city in size for the previous 50 years. By 1881 Liverpool's population had reached 611,000 and the city demanded suitable facilities for its inhabitants. As a result the Lying-In Hospital evolved, through updating, re-siting and re-naming, into the Liverpool Maternity Hospital. The new, improved model opened on Oxford Street in 1926 as the largest voluntary maternity hospital in Britain.
I was bored here on 11 January 1971. They didn't get me either. Three years later my sister entered the world in Oxford Street. My earliest memory must be going with Dad to see Mum and the new baby in the ward. Whilst doing some research into the history of the hospital I came across the photograph below and although it was taken in 1927 what immediately struck me was how similar this photo is to the memory I have of going in to the ward in 1974 to see Mum and sister Andrea for the first time. Mum was in a bed under a window just like the women to the right of the photograph. I'm sure many thousands of other Liverpudlians will have similar memories. 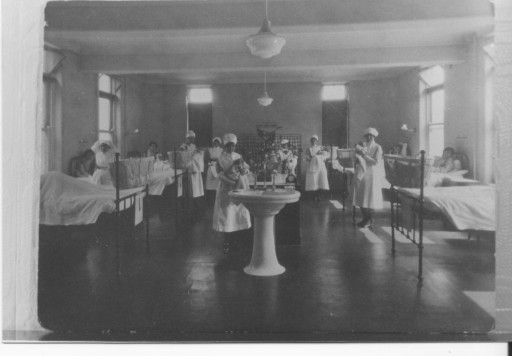 Births considered more newsworthy (except, perhaps, in our house) occurred on Friday 18 November 1983 when the world’s first surviving set of single-sex sextuplets were delivered at the Hospital. Hannah, Lucy, Ruth, Sarah, Kate and Jennifer Walton were born into a blaze of media coverage. 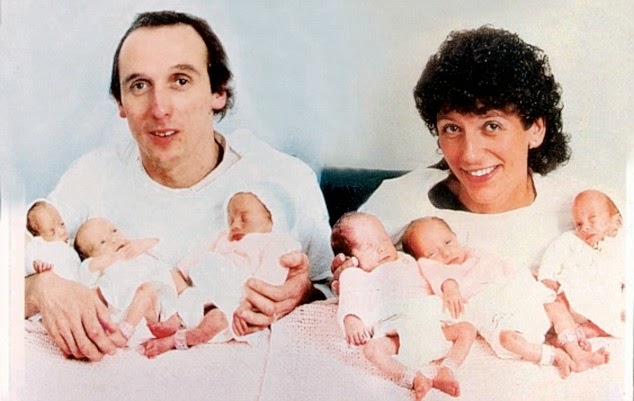 Graham and Janet Walton with their six daughters. Dad, the future seventh in line for the bathroom, looks suitably shell-shocked!
Today a plaque commemorating John Lennon's birth here in 1940 can be found alongside the entrance to the former hospital which closed in 1995. The building is now used for Student Accommodation and forms part of the University Campus. 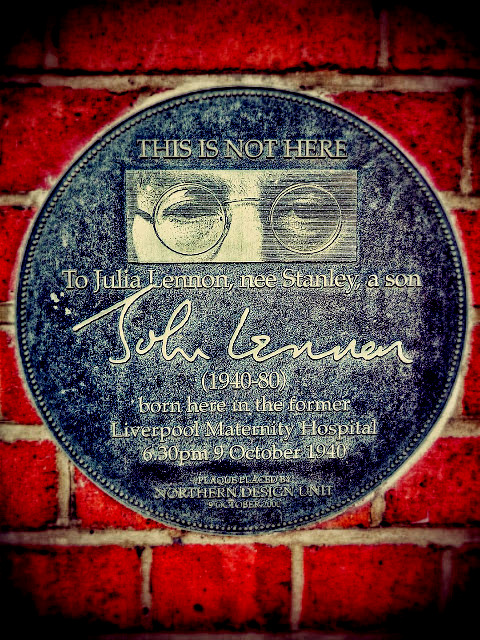 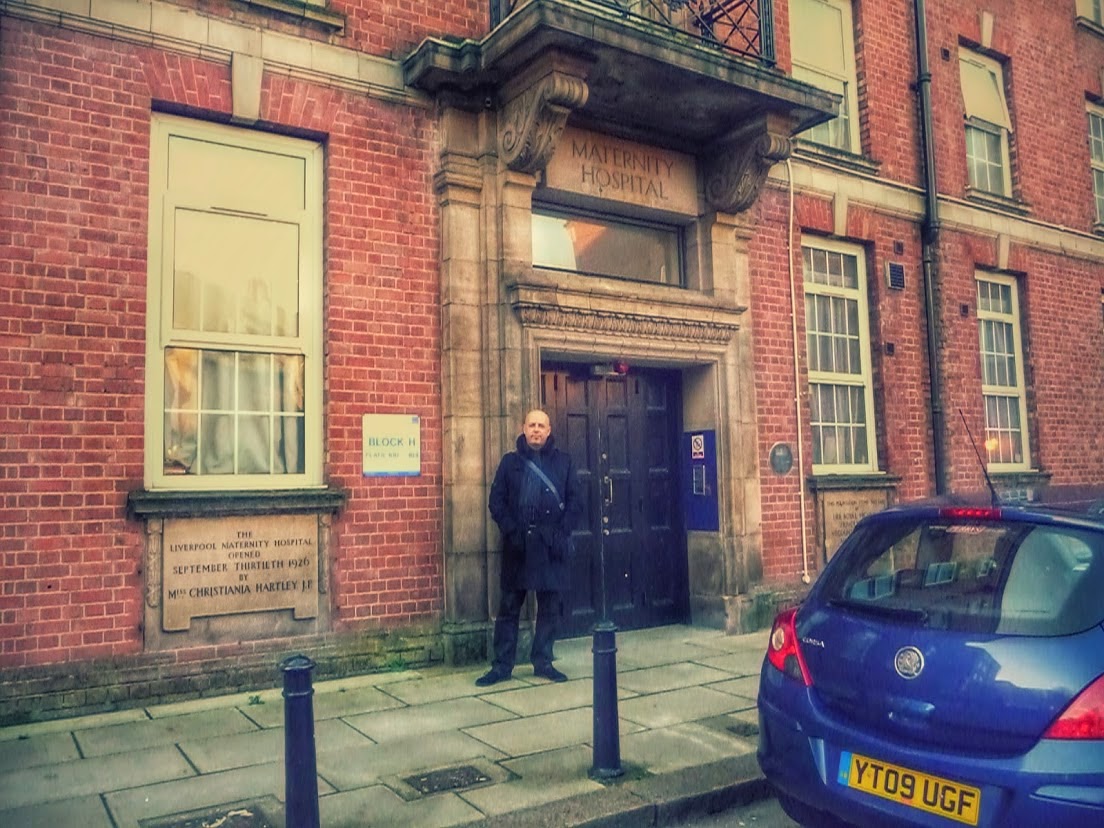 Outside my birthplace exactly 41 years and 4 days later in 2012. You can see the plaque for John to the right of the doorway. To date, neither myself nor the Waltons have one.
Oxford Street closed in 1995 after a merger with the Women's Hospital on Catharine Street, and the Mill Road Maternity Hospital. More recently the much larger Liverpool Women’s Hospital has been built on Crown Street (off Upper Parliament Street) the birthplace of my children and the next generation of Liverpudlians. I wonder if one will grow up to be more famous than John Lennon or Winston Churchill?