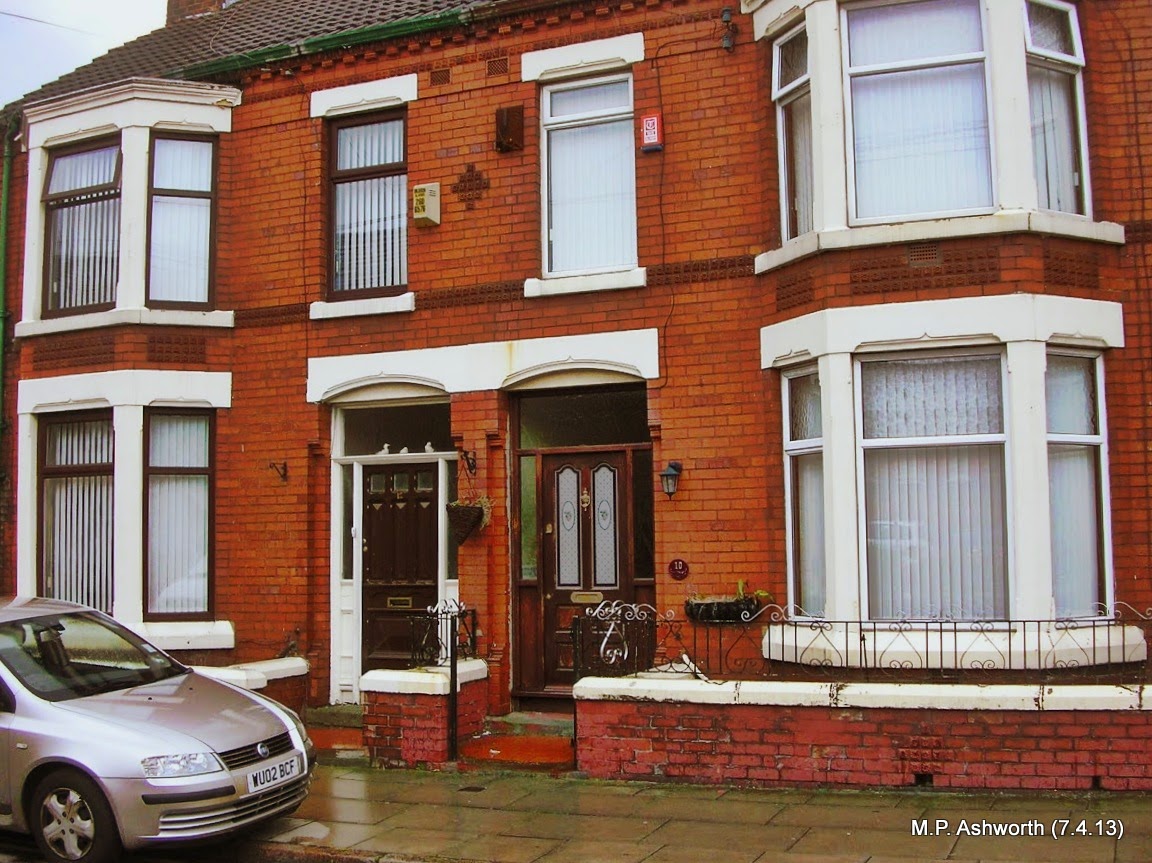 In late June 1942 Jim and Mary McCartney brought their first son James Paul home to rented rooms in 10 Sunbury Road, a large terraced house in Anfield, near to the stadium of Liverpool Football Club.

With all work in the Cotton Exchange suspended for the duration of the war, Jim found work in the machine shops of D. Napier and Son, an engineering firm situated in a new plant near the Walton end of the East Lancashire Road, manufacturing the Sabre Piston engine for British fighter planes.

Napier was required to expand its engine production facilities as part of the war effort. Their factory in Acton Vale to the west of London was considered to be a vulnerable site and by the end of October 1939, a decision had been made to build a shadow factory in Liverpool. 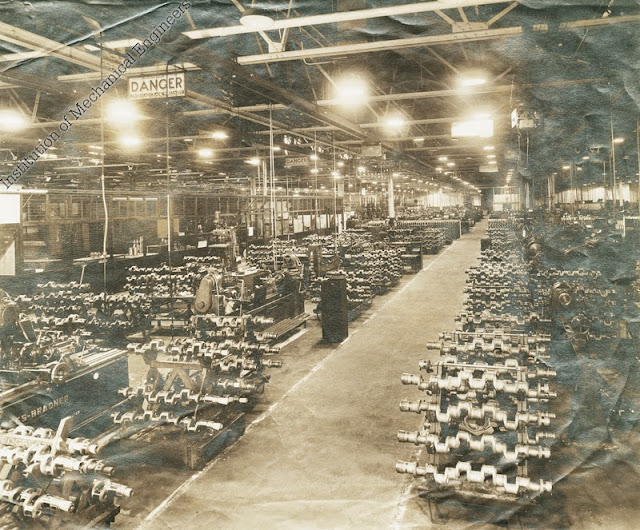 The Napier Factory in Liverpool with Sabre components bottom left

Building work had started on the installation during 1940. With new machine shops, assembly areas and test facilities covering a floor area of over 1 million square feet, the factory was ready for production by the end of 1941 employing a workforce freshly trained in precision-engineering, which had grown to in excess of 10,000 by 1942. 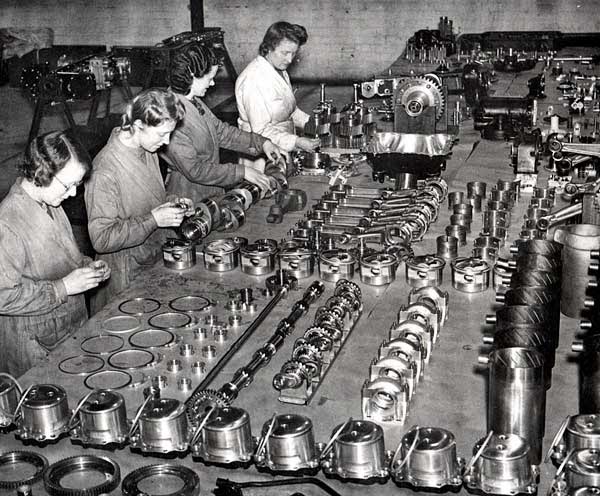 Following a period of training Jim became an automatic setter lathe-turner on a production line plagued with difficulties. The Sabre engine was so technologically advanced it proved to be difficult to adapt to assembly line production. Although the first fully tested Napier Sabre II engine to emerge from the Liverpool Works was delivered in February 1942 subsequent manufacturing and development problems (and the Company takeover in 1942 by the English Electric Co.) meant that it took until 1944 for the engine to be considered reliable enough to be used to power Hawker Typhoons and Tempests.

Keen to do his part for the war effort, Jim had joined the Fazakerley Fire Unit whilst still living in Norris Green and every evening after finishing at Napiers he returned there, resuming his fire-watching and reporting when and approximately where he saw bombs dropping. If they had fallen fairly locally he would make his way to the site to assist in rescues and act as a fireman when called upon. When he finally got home to Sunbury Road and climbed into bed he must have been exhausted.

Mary may have given up nursing for a while to look after baby Paul, and there may have been a war on, but she was just as particular about cleanliness at home as she had been on the ward. The story goes that one day she left Paul outside in his pram in the yard for a bit of fresh air and when she returned was mortified to find smudges of soot on his face. That was enough for Mary to decide that the house in Sunbury Road was unsuitable and she told Jim that they would have to move.

Mike McCartney believes that their next move, to Wallasey on the other side of the River Mersey came about through his Dad's work at Napiers. He was considered Air Force because of his job and with it came the house. Beatles historian Mark Lewisohn writes that the house came via a colleague of Jim's from the Cotton Exchange.


The publication of part one of Mark Lewisohn's definitive Beatles biography "Tune In" has brought to my attention a number of hitherto unknown Liverpool locations with a Beatles connection. If you're visiting Sunbury Road it's worth making a short journey down Anfield Road past the fine old Police Station and school buildings on your left to the junction with Walton Breck Road. 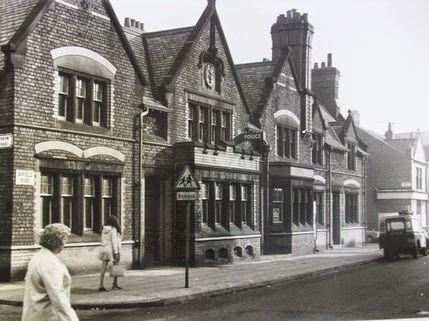 The Police Station on Anfield Road (then and now) 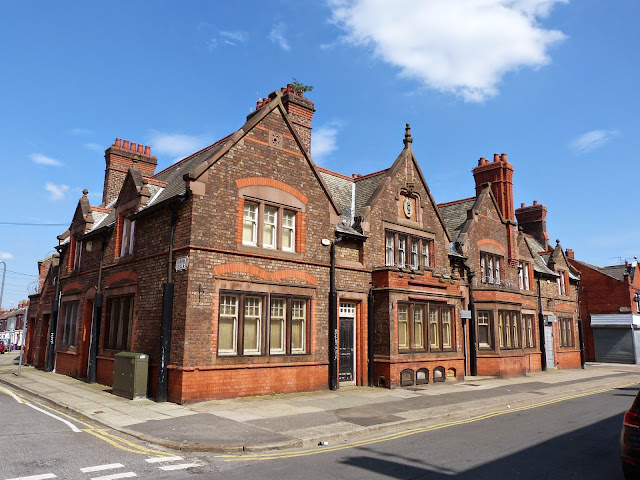 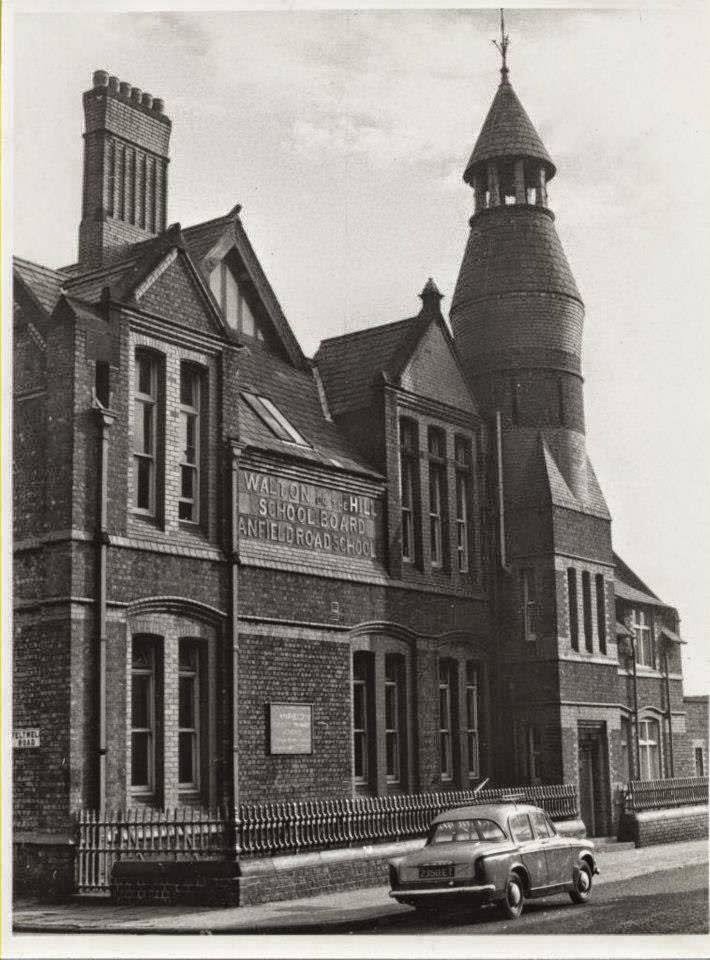 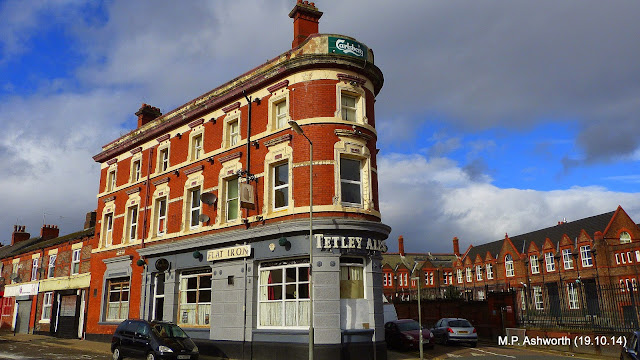 Half a century before the McCartneys moved to Anfield, John Lennon's great grandfather James Lennon and his family were living at 373 Walton Breck Road.

James and his wife Jane, both from Irish Catholic families who had fled County Down and travelled to Liverpool to escape the Great Famine around 1845, had lived in numerous houses in the 40 odd years since their arrival.

James had worked variously as a warehouse man and labourer but by 1891, at the age of 60, he was running his own family business, James Lennon and Co. Car Proprietors from no. 373. Also living in the house was his seventh and youngest son Edward (age 25, occupation: car driver), Edward’s wife Ann Jane (nee Rigby) and their nephews Richard Henry (age 5) and Edward (age 3).
The Lennons owned horsecars – horse drawn trams, which were prevalent in Liverpool until the 1897 introduction of electric models. 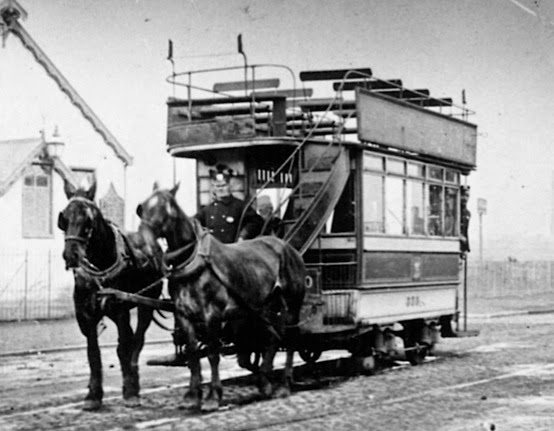 Horsecar No 330, probably photographed in 1903. This car formed the last horse-drawn service to run in Liverpool on 25th August 1903.
(Photo courtesy of David Voice and the Tramways and Light Railway Society) 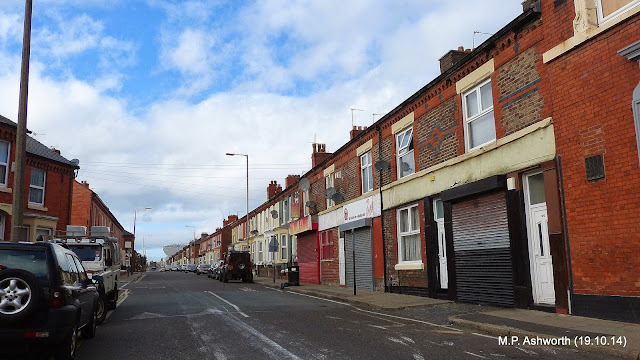 The Lennon's house, no. 373 is the white door to the left of the black shutters above

Today No. 373 not only remains but does so substantially unaltered since the Lennon's time, retaining the integral garage space from where James and Edward operated their horsecar service.
On the horizon in the above photo you can just make out the Anfield stadium of Liverpool Football Club which was founded in 1892, right at the time the Lennon's horsecar business was in operation. The club was created following a dispute between the Everton football club committee and Jack Houlding, club president and owner of the land at Anfield where Everton had played for eight years.  Everton relocated to Goodison Park in 1892 and Houlding founded Liverpool Football club to play at Anfield. 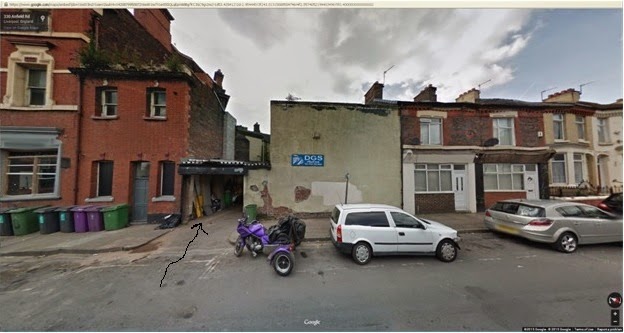 The garage entrance at the back of no. 373 Walton Breck Road, as viewed from Anfield Road (marked with arrow). 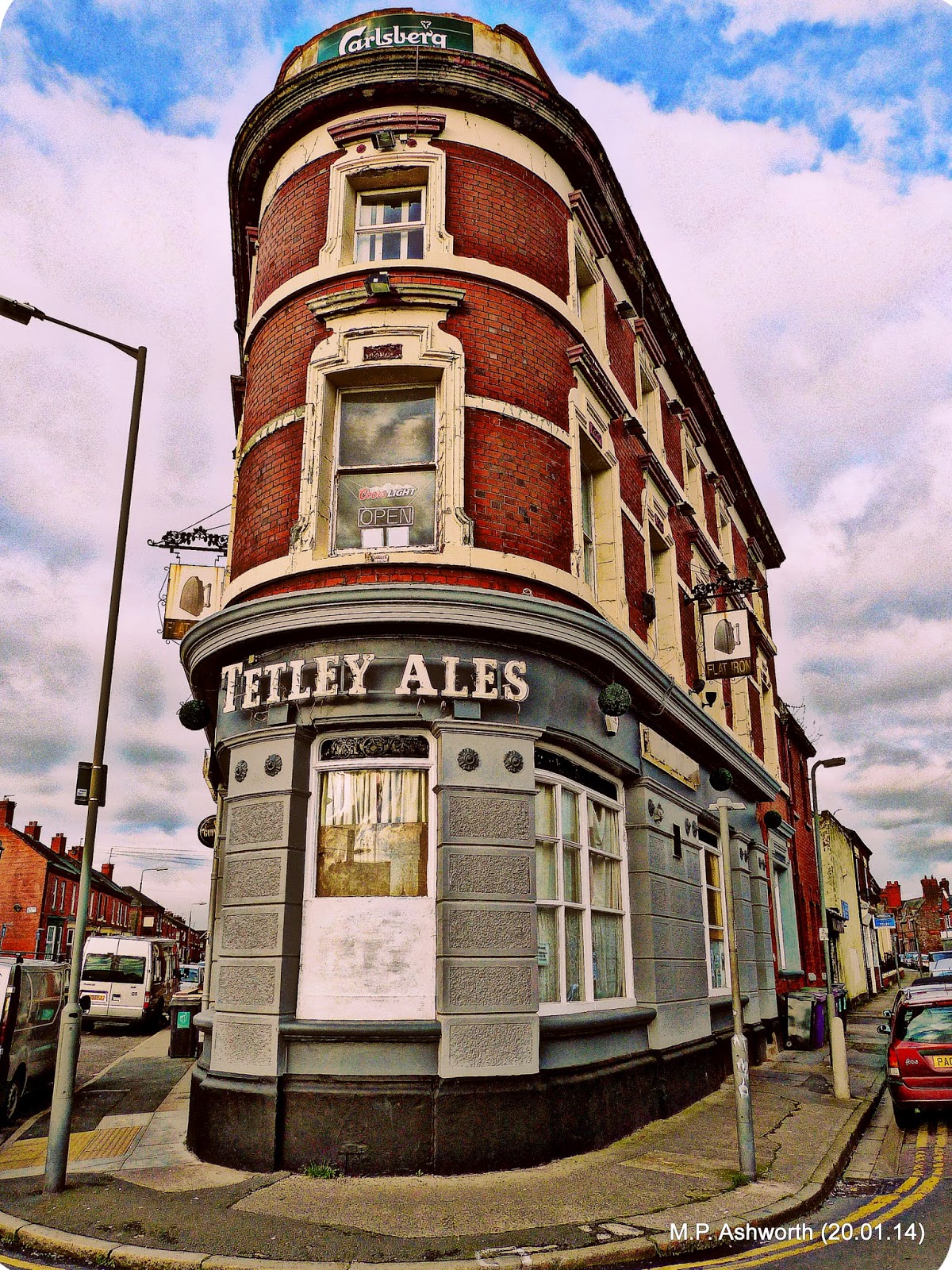 Adjacent to no. 373 Walton Breck Road is the Flat Iron Public House and there are tales here concerning another of John Lennon's relatives, his paternal grandfather, John "Jack" Lennon.


After the death of his second wife, Margaret Cowley in 1892, Jack Lennon raised his daughter Mary with the assistance of his housekeeper, Mary "Polly"Maguire. It was around 1894 when Jack and Polly started living as man and wife. Polly soon found herself pregnant, more often than not. They had 15 children; tragically 8 died young.

Jack would have been in the area because his father was running his business from their garage-cum-home two doors down from the pub but unlike his brother Edward he does not appear to have lived there for any length of time, if at all. However, in 1894 the Lennons were regular patrons in the Flat Iron and there are stories of Jack Lennon, gambler and drinker singing loud and often around the ale-houses.


One tale has Polly, wrapped in the shawl typical of Liverpool Irish women, hair wound tightly in a bun, 'short, solid and muscly with the bravery and bravado of many of her kind' entering the pub one boozy Christmas Eve to find Jack standing on a table. "Here entereth the woman now!" he bellowed to which she roared "Get home with your bloody wages now!"

Between 1894 and 1897 John (Jack) and Polly had a number of addresses including three places in West Derby - No. 34 Tudor Street,  No.33 Bourne Street, No. 115 Butler Street and one at 12 Caradoc Road in Seaforth, the house where they were living in 1898 when Jack's father James Lennon passed away.

James Lennon died at the age of 68, and perhaps the business died with him as by 1901 his youngest son Edward was living at 14 Job Street in West Derby, Edward’s occupation perhaps now enhanced to the position of “Coachman Groom”. The last horse drawn tram ran on 25 August 1903 so he would have had to have found alternative employment in his later years.

On 14 August 1905 their son George Lennon was born at 25 Denton Street, Toxteth Park. John (Jack's) occupation was given as Freight Clerk.  The child's mother was Mary Lennon formerly McGuire, except that in reality, she wasn't. Jack and Polly were not yet married.


Three years later on 27 January 1915 John (Jack) Lennon (then aged 59) finally married Mary (Polly) Maguire(42) at West Derby Register Office, Liverpool.  He was a widower and their address was given as 27 Elmore Street, Everton. He was by then a "Dock Labourer" and their respective fathers were James Lennon (deceased), a Car Proprietor and James Maguire, a retired Horse Keeper. 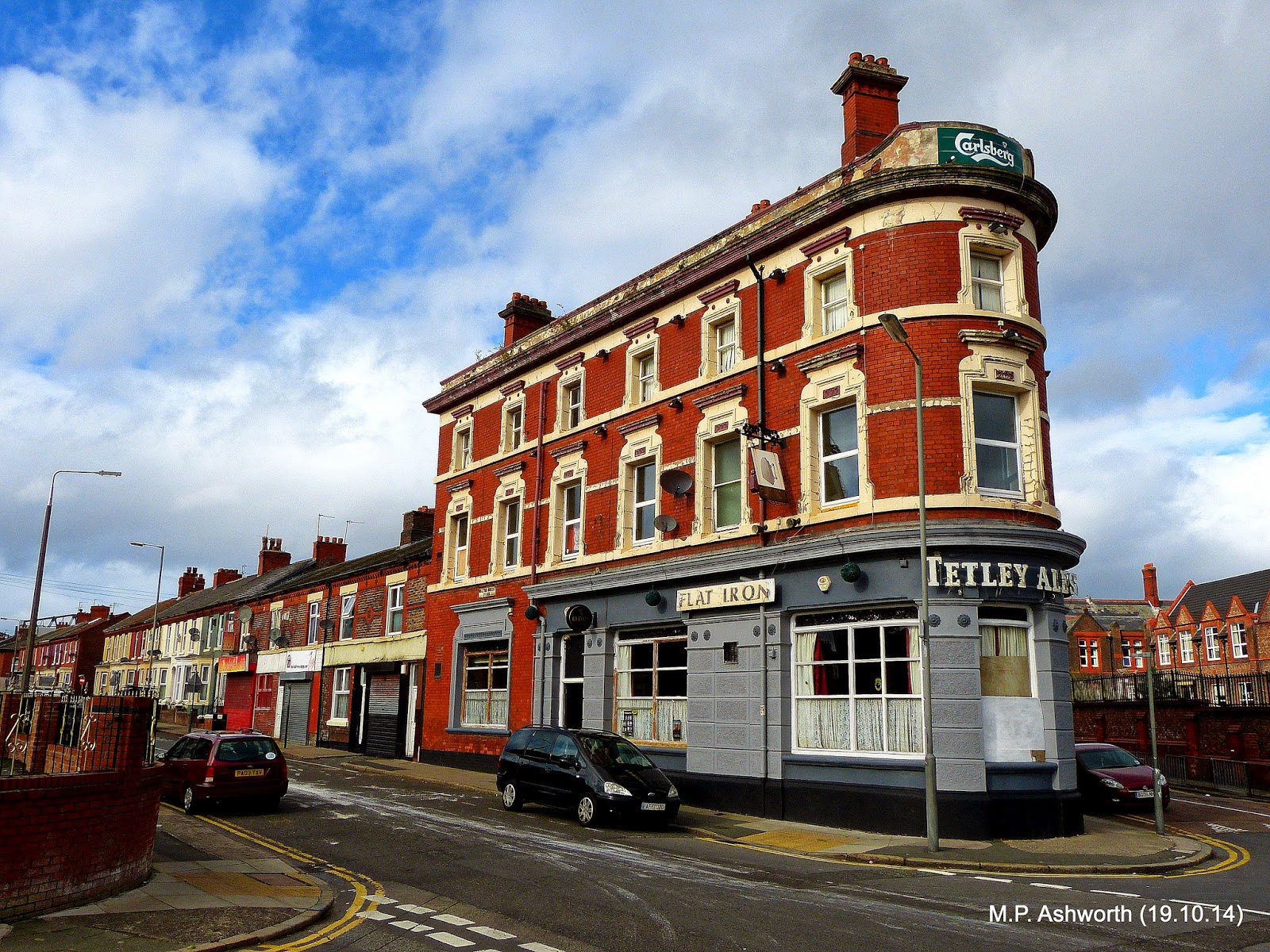 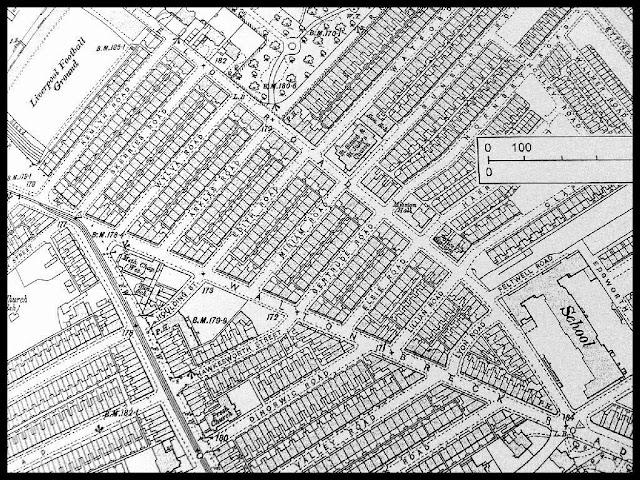 A map of the area showing clockwise from top left Anfield Stadium, Sunbury Road, the Police Station and School on Anfield Road, and the Flat Iron Pub (marked P.H on the junction of Anfield Road and Walton Breck Road). No. 373 is marked with an X to the immediate left of the P.H. (Click to enlarge)
John "Jack" Lennon died on 3 August 1921 at 57 Copperfield Street, Toxteth and was subsequently buried in Anfield Cemetery, not far from Walton Breck Road.  Polly died on 30 January 1949 also at Copperfield Street where she would meet her grandson John Lennon at least once in 1944 before she passed. 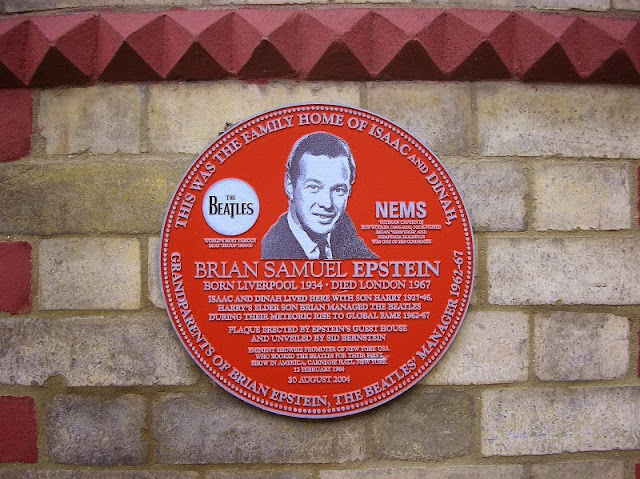 One final place of interest to Beatles fans visiting this area can be found at No. 27 Anfield Road, the family home of Brian Epstein, the Beatles' manager.

Brian's grandfather, Isaac Epstein, (born 1877) was a Jew from Lithuania (then part of the Russian Empire), who arrived in Britain in the 1890s, around the age of eighteen or nineteen and speaking only Yiddish. In 1900 in Manchester, he married Dinah, the daughter of Joseph (a draper), and Esther Hyman, who had emigrated from Poland to Britain (circa 1871-72), with their eldest son, Jacob.

In 1901, Isaac and Dinah were living at 80 Walton Road, Liverpool, with Isaac's sister, Rachael Epstein, above the furniture dealership he had recently opened.

Despite the Depression and constant undercurrent of anti-Semitism, Isaac quickly established a reputation for being honest and hard working and his business flourished.

Dinah and Isaac's third child was Harry Epstein, Brian Epstein's father, born in 1904. After Harry and his brother Leslie had joined the family firm, Isaac Epstein founded "I. Epstein and Sons". The family business expanded further when they bought the neighbouring business - the North End Road Music Store (known as NEMS) in 1929, where Jim McCartney's family had bought a piano.


In 1927 the Epsteins moved to a larger home at 27 Anfield Road, Liverpool. They were still there when Jim, Mary and baby Paul McCartney moved in to Sunbury Road for a period in 1942, and would remain there until 1946. It was converted into a Beatles-themed hotel called Epstein House in 2003.

The Epstein House hotel featured in series 10 of Channel 5's "The Hotel Inspector" in February 2014: