Ringo's parents separated when he was three years old. His dad, Richy Starkey, left their home at 9 Madryn Street in 1943 and moved back in with his parents who lived further along the same road at number 59, the house where he had began his married life with Elsie in 1936.

Richy eventually moved away from the area. Elsie was left to bring up young Richy with the help of her friends and in-laws with whom she remained on good terms.


Ringo: Now my dad had gone, I was brought up by my grandparents and my mother. It was strange because the grandparents were the parents of my father; they weren't my mother's parents. They really loved me and looked after me. They were great. They'd take me on holiday, too.

Receiving little or no money from her former husband, Elsie found the rent on number 9 (number 9, number 9) hard to manage so they moved into a smaller house in Admiral Grove on the other side of High Park Street.

Ringo: We lived at first in a huge palatial house with three bedrooms. It was too big and we couldn’t afford it now my dad had stopped supporting my mother. We were working class, and in Liverpool when your dad left you suddenly became lower working class. So we moved to a smaller, two bedroom place (they were both rented – houses always were).

The move was from one street to the next, from Madryn Street to Admiral Grove – people around us didn’t move very far. It was only 300 yards.

Indeed Ringo would recall that when he was sitting on the back of the removal van they didn’t even put the back up, so short was the distance to their new house.
Actually, there was little new about the property. The house in Admiral Grove “had been condemned as derelict ten years before we moved in, but we lived in it for twenty years.” 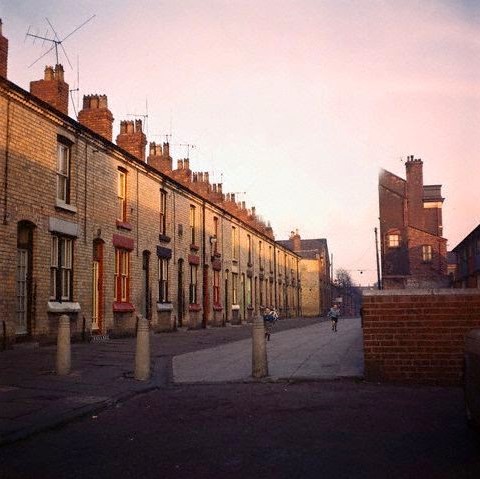 Admiral Grove photographed in 1964. The rear of the Empress pub is on the right.
This would be where Ringo grew up, where his childhood memories were formed, the place he would call home until he moved to London in late 1963.
I don't remember the inside of our house in Madryn Street - I know we never had a garden - but a lot of my pals grew up on the same street and I went into their houses. I remember the Admiral Grove house, and that didn't have a garden either. It had a toilet down the yard; we never had a bathroom. But it was home, and it was fine. We had two bedrooms: one for my mum, and one for me.
Ringo Starr - Anthology 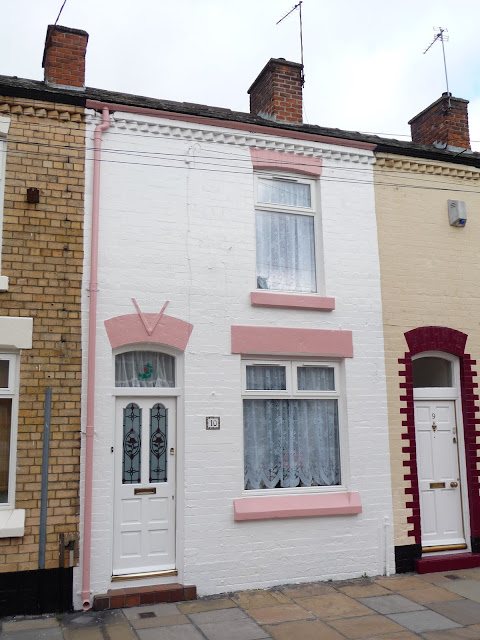 No. 10 Admiral Grove, 70 years on and still displaying a Second World War relic - the "V" for Victory sign over the front door. 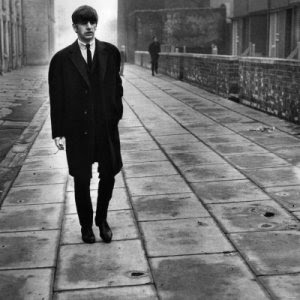 As he got older he began to understand the tough realities of living an impoverished life in the Dingle: From about thirteen, things came into focus a little. I felt Liverpool was dark and dirty; I wanted to get out, to live somewhere there was a little garden. I wanted to escape Admiral Grove. I didn't need to move very far - just somewhere like Aigburth where there was some green. I used to love the park; we'd sag off school and go to Sefton Park and Princes Park. I have an affinity with green, the sea and space. In my life I have had houses with lots of land, but it's the view that I need. 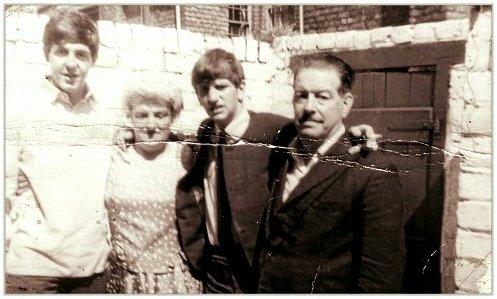 The backyard of no. 10 on 30 August 1963: Paul, Elsie, Ringo and Harry Graves taken during a break from filming the BBC documentary 'The Mersey Sound'.

Ringo: Harry, my stepfather, came into the picture when I was eleven. He worked as a painter and decorator up at Burtonwood, which was an American army base. He made me laugh, he bought me DC comics; and he was great with music. He used to lay music on me, but would never force any of it. He was into big bands and jazz and Sarah Vaughan, while I'd be listening to stupid people. He'd say, 'Have you heard this?' That was always his line: 'Have you heard this?' He was a really sweet guy; all animals and children loved him. I learnt gentleness from Harry.

I loved Harry, and my mum loved him - and then she said they were going to get married. She asked me, 'What do you think?' I was pretty angry for a while, because I was thirteen; but I knew if I said 'no', she wouldn't have got married. It was a terrible position to be put in as a kid. But I said, 'Sure, great,' because he was a good guy.


I had the pleasure to meet and pass the time of day with Harry many times. Before he passed away in 1994 we were both quite a regular visitors to the Beatles Shop in Mathew Street. I never asked him about his famous stepson, although inevitably he would come up in conversation from time to time, and I never asked him to try and get me an autograph or anything else. It didn't seem right to do so. He was a nice, quiet man and it's clear that Ringo thought the world of him. 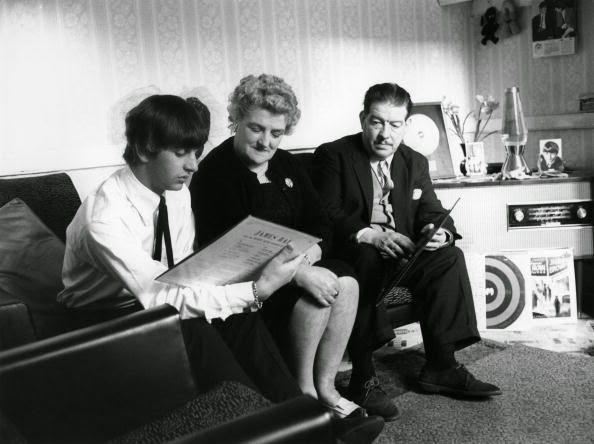 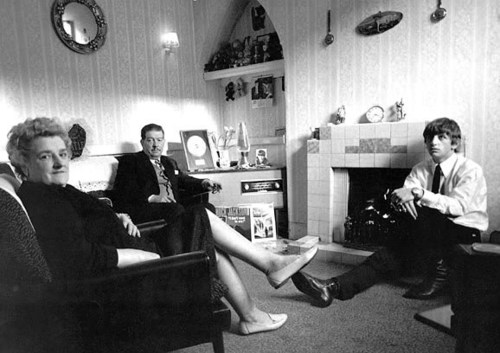 At home with Harry and Elsie in 1964. (photos by Astrid Kirchherr, I think) 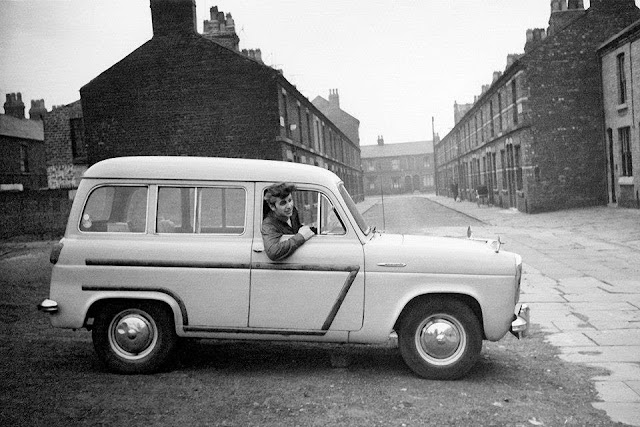 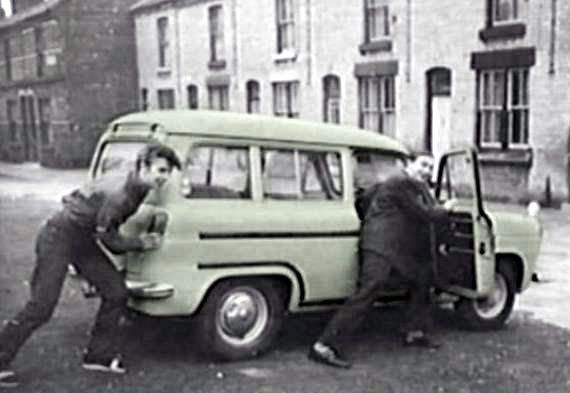 More photos of Ringo outside Admiral Grove circa 1960-61. They look like they might have been taken on the same day. He's not likely to have worn Birkenstocks with socks more than once. Is he? 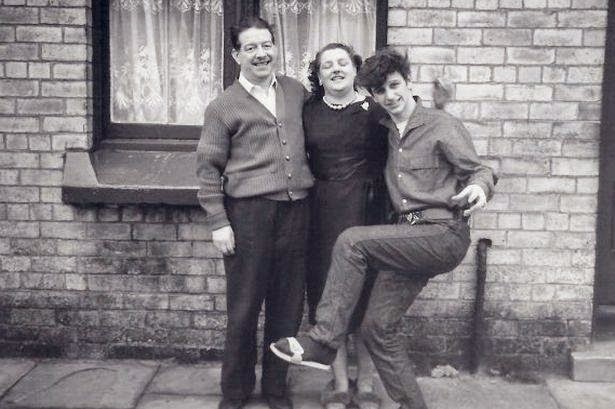 Talking about this photo when publicising his new e-pub book "Photograph" he admitted  “This picture blows me away. I mean, it’s just me with my mum and my step-dad – Elsie and Harry – outside our house in Admiral Grove, Liverpool. But I’m wearing Birkenstocks sandals! How cool am I? Birkenstocks, ha ha ha ha! In those days! When I saw that picture I was like, ‘What? Where did you get them?!’ Anyway, there they are. We were just having a bit of fun outside the house. We moved in there in 1945 and I lived there until I was 23 and moved to London.” 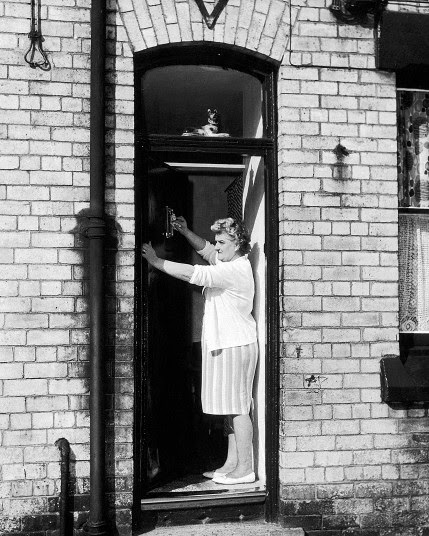 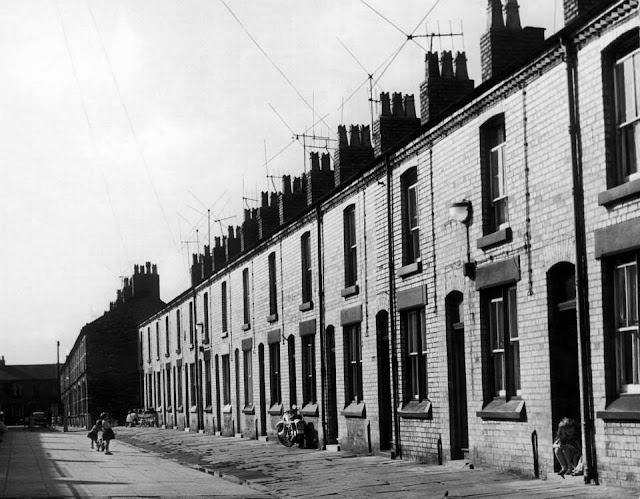 There are not only more photographs of Ringo both inside and outside his house than any of the other Beatles, uniquely, there's also film.


From Tuesday 27 until Friday 30 August 1963 the Beatles filmed a number of scenes for inclusion in a new documentary being made by the Manchester based BBC producer Don Haworth. The Beatles had their first meeting with Haworth in Blackpool on 21 July 1963 and were impressed with his idea to capture the spirit of the Mersey Beat boom on camera, especially when he promised them the opportunity to discuss their rise to the top more seriously than they would be allowed on the usual pop programmes of the day. With the Beatles consent he signed a contract with Brian Epstein on 6 August, granting him exclusive access for a time (which also prevented them from appearing in a similar documentary being made by ATV at roughly the same time, "Beat City"). 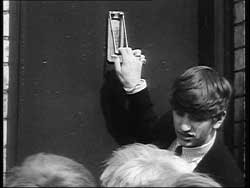 On Friday 30 August 1963 the final day of filming took place outside 10 Admiral
Grove. To illustrate how life had changed for them since becoming household names (at least on Merseyside) the BBC filmed Ringo leaving his home, valiantly fighting through a swarm of fans and reaching the questionable safety of George's open top sports car, George seemingly unnoticed and unmolested by the screaming horde, even though he was only parked a few doors down. 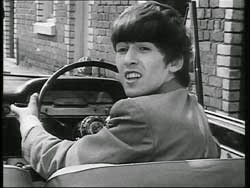 Why has nobody noticed I'm here? 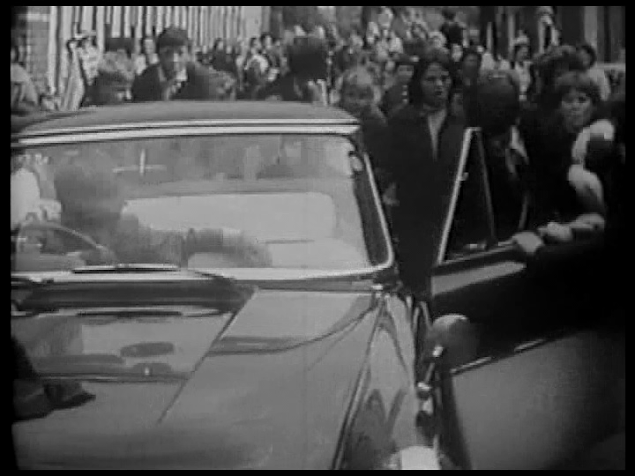 Of course the whole thing was staged for the cameras, many people in the years since pointing out that the majority of the "fans" look like local kids from St. Silas School, closed for the summer holidays, enjoying the novelty of being on the telly. 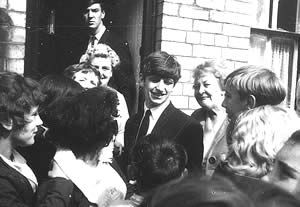 Outtake photographs indicate that Ringo was clearly not under any real threat and he spent time chatting to the neighbours gathered outside his house while Elsie looked on. John and Paul were also present, sitting in the back of George’s car, but this was not shown in the final film.
The Beatles also had members of their inner circle on hand. Tony Bramwell was there to ensure Ringo could get in and out of his house. He's pictured in the dark suit and tie directly above George in the following photo. 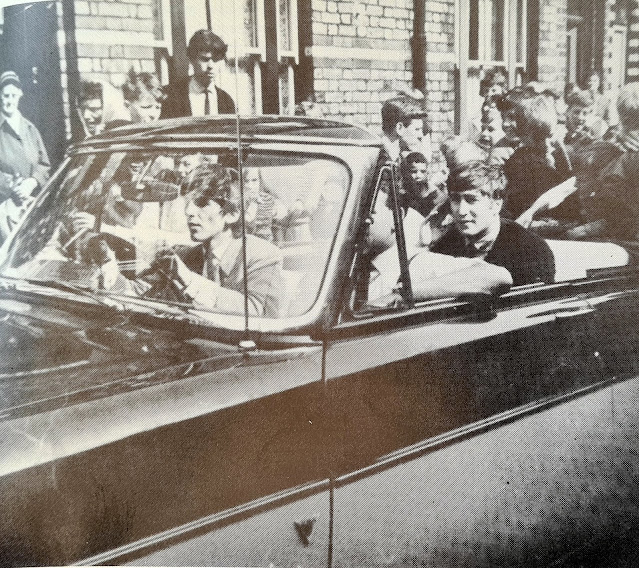 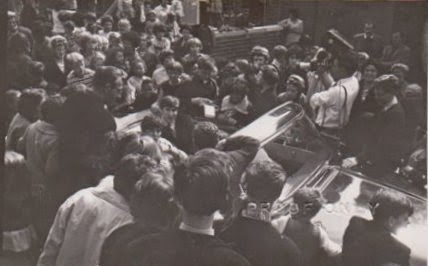 Mal Evans was also there making sure the fans didn't get out of hand. He's to the left of Paul, towering over the kids surrounding the car, and labelled in the photo below which also captures Tony Bramwell, standing top centre. 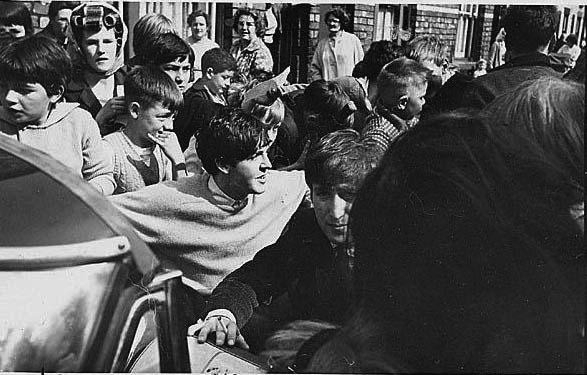 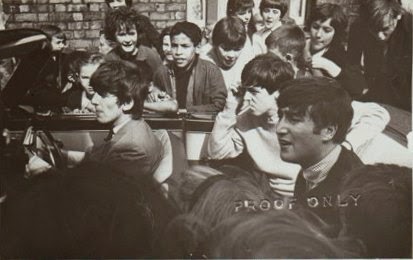 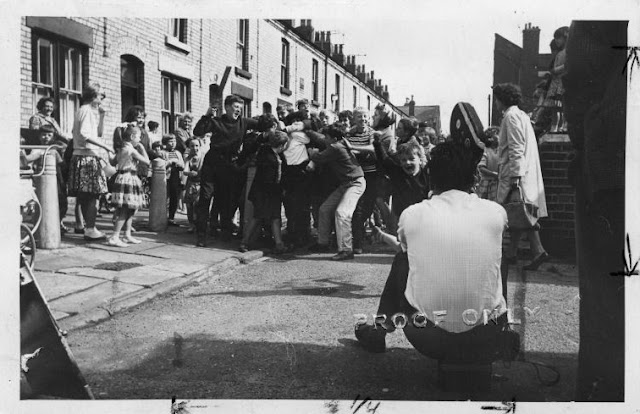 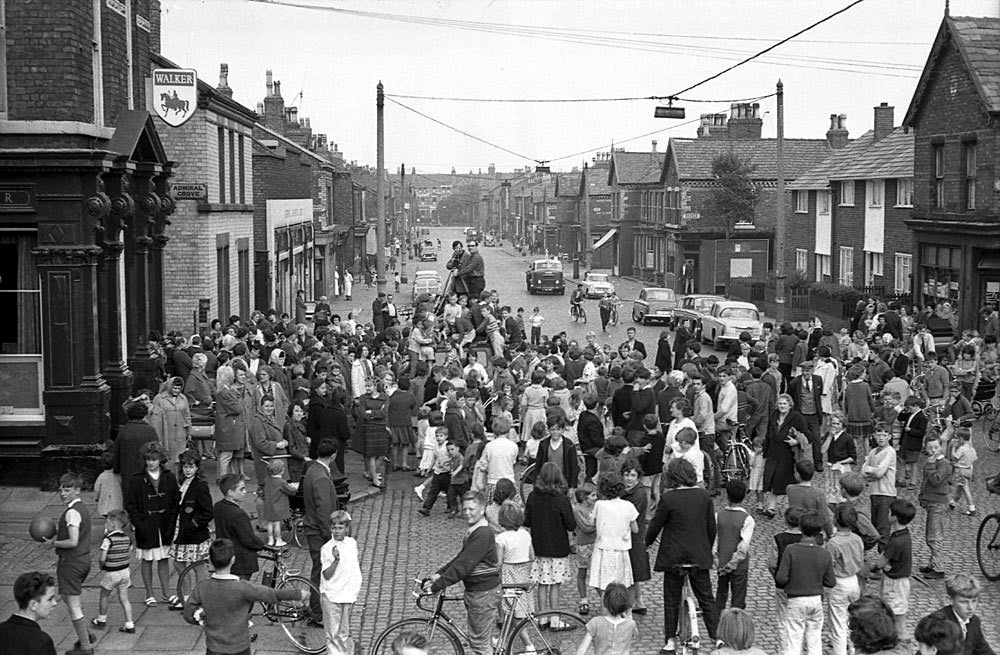 The fantastic photo above shows crowds gathering outside the Empress Pub, High Park Street during the filming. The building displaying the Admiral Grove street sign is the co-op, visible on the right hand side of the front cover of Ringo's "Sentimental Journey" LP (1970) but long since demolished. On the right of High Park Street is number 126, the premises of W. Gorry (grocer) where Elsie worked, and featured on the rear cover of the same record.

"The Mersey Sound" was first broadcast on John Lennon's 23rd birthday, 9 October 1963, from 10.10-10.40pm, in the London and northern England regions. Its first nationwide broadcast took place on 13 November from 7.10pm and clips from the programme have featured heavily in most documentaries made about the group since.

Viewed today, this 36 minute BBC special succinctly captures one of the most magical moments in musical history: the birth of Beatlemania. This fuelled the Mersey Sound, which turned into the full-scale British Invasion that changed the world in 1964. 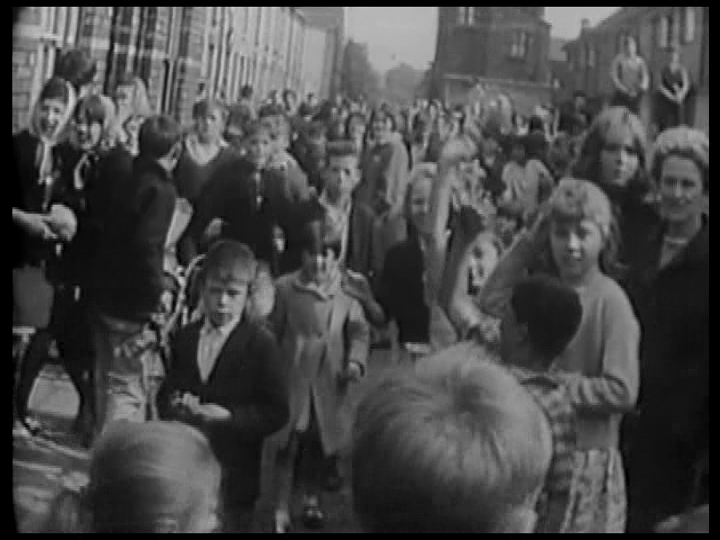 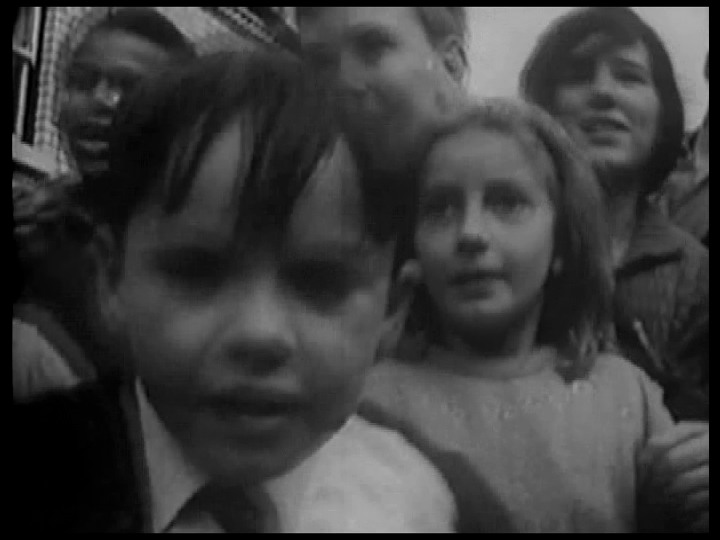 Liverpool I Left you
Said goodbye to Admiral Grove
I always followed my heart
So I took it on the road
Destiny was calling
I just couldn’t stick around
Liverpool I left you
But I never let you down
Liverpool 8 by Ringo Starr
(written by Richard Starkey, Dave Stewart) 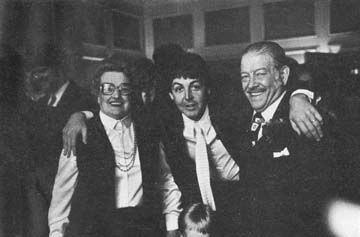 I've recently found the above photograph of Paul with Harry and Elsie at Ringo’s wedding in 1981. It's nice to see the families all remained on good terms. Compare this photo with the one of them in the backyard in 1963. None of them could have guessed then to what extent their lives would all be changed. 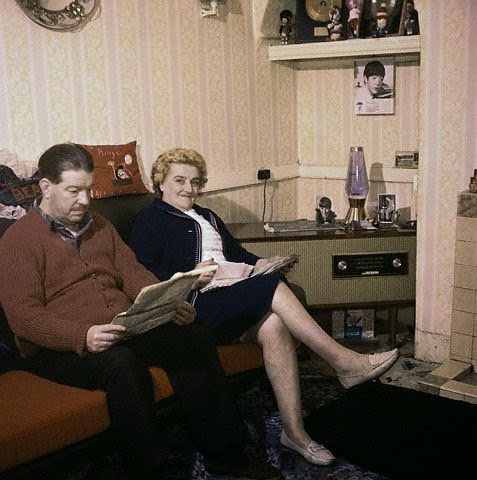 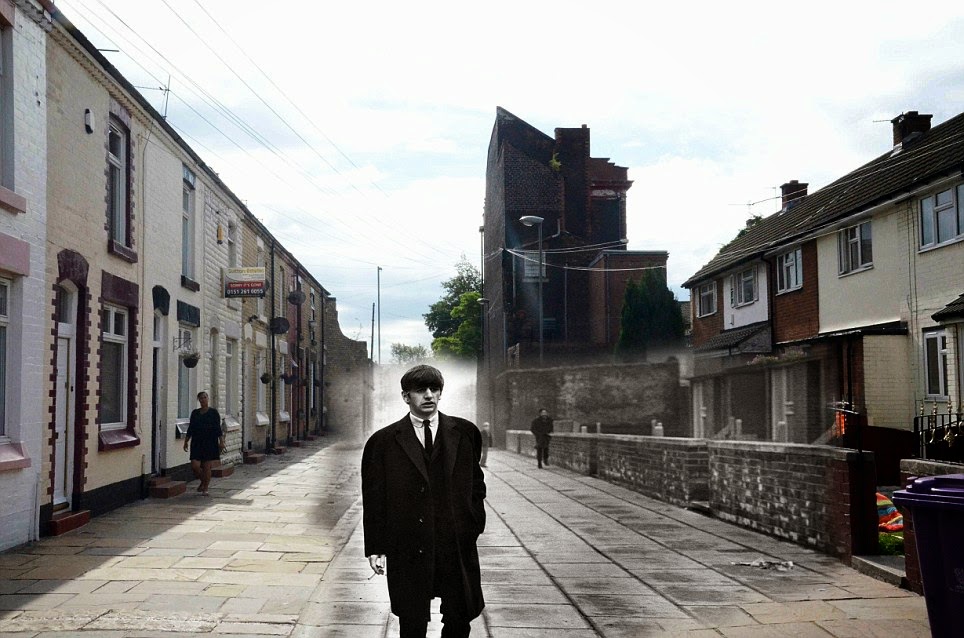 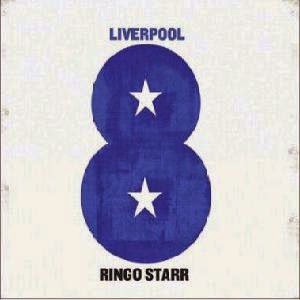