Picture Yourself in a Boat on a River

On a wet and misty Good Friday I stopped off at the Pier Head to have a look at the Mersey Ferry Snowdrop and her new paint scheme designed by the Pop Art legend and Sgt. Pepper's album cover artist Sir Peter Blake. 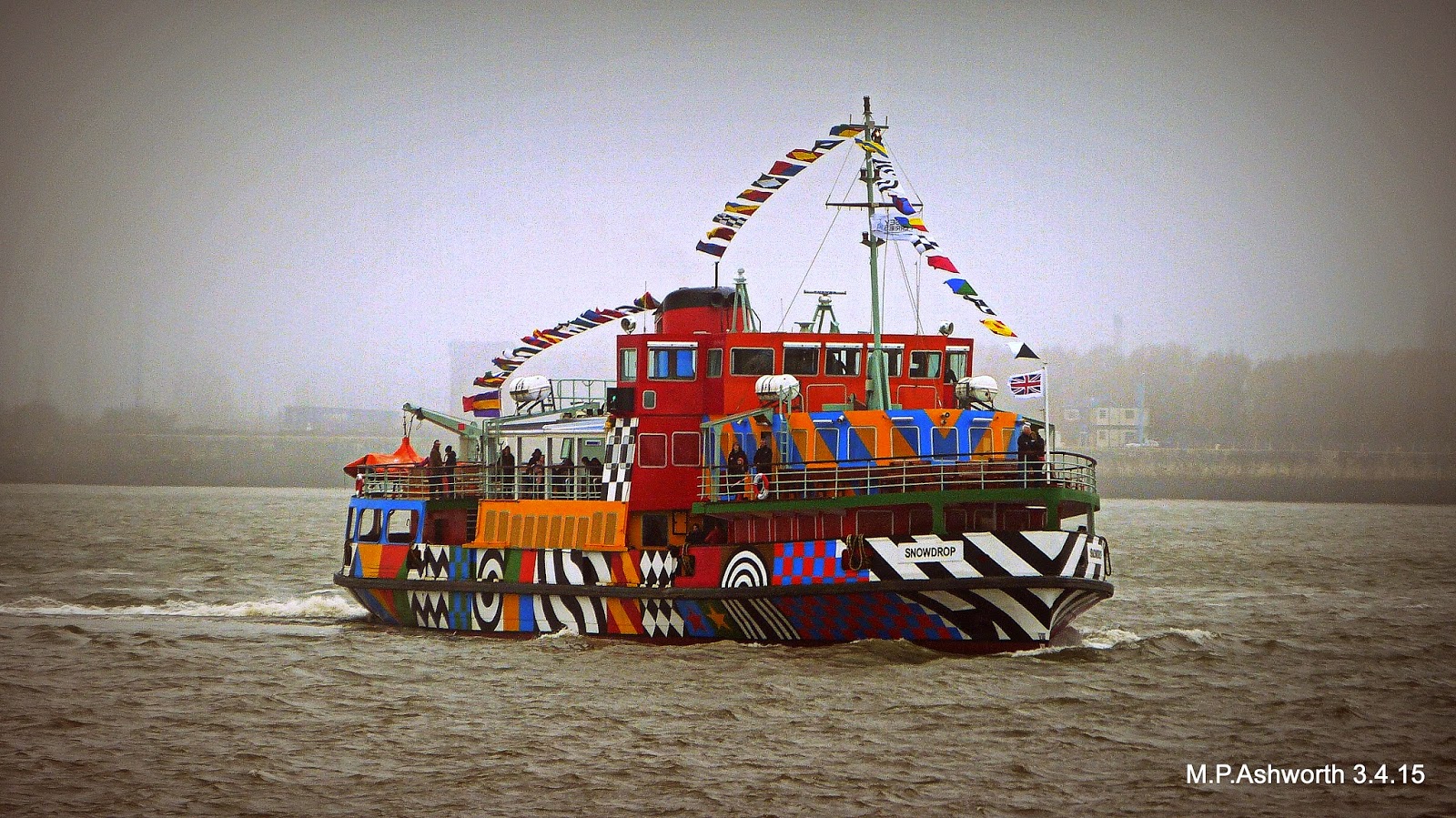 His design entitled Everybody Razzle Dazzle was commissioned as part of the commemorations for the First World War and incorporates his trademark brilliant colours and vivid patterns in homage to anti-submarine ‘dazzle camouflage’. 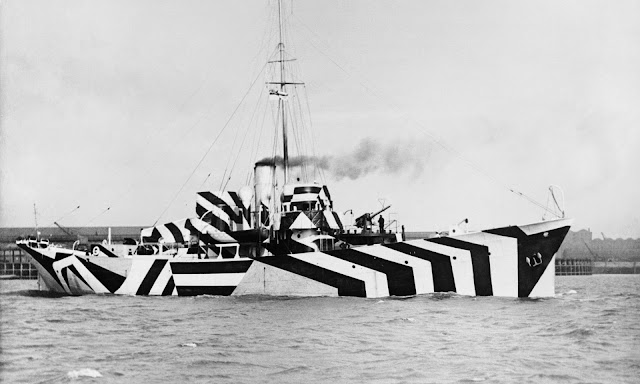 During the First World War, professional artists would paint wild patterns - "dazzle camouflage" - on British ships to confuse the enemy, reasoning that such optical art would make it difficult for U-boat captains to estimate a target’s range, speed and direction.  When asked about his latest piece Blake admitted that he had a great time following in the original dazzle artists’ footsteps. 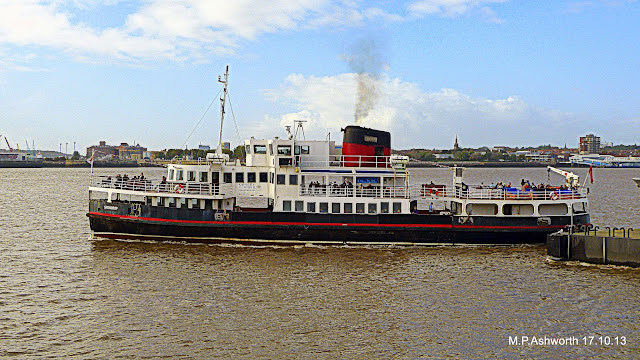 Snowdrop the Mersey Ferry chosen for razzle-dazzling was built in Dartmouth by Philip and Sons and launched under its original name of Woodchurch on the 28 October 1959. Sister ship  Mountwood was launched earlier in July that same year and both were loosely based on the designs of the Leasowe and Egremont of the Wallasey fleet, although both are 19 feet longer, 6 feet wider, a foot taller and 153 tonnes heavier than the earlier vessels.

Mountwood and Woodchurch were refitted and renamed Royal Iris of the Mersey and Snowdrop, respectively in 2002 and 2004. 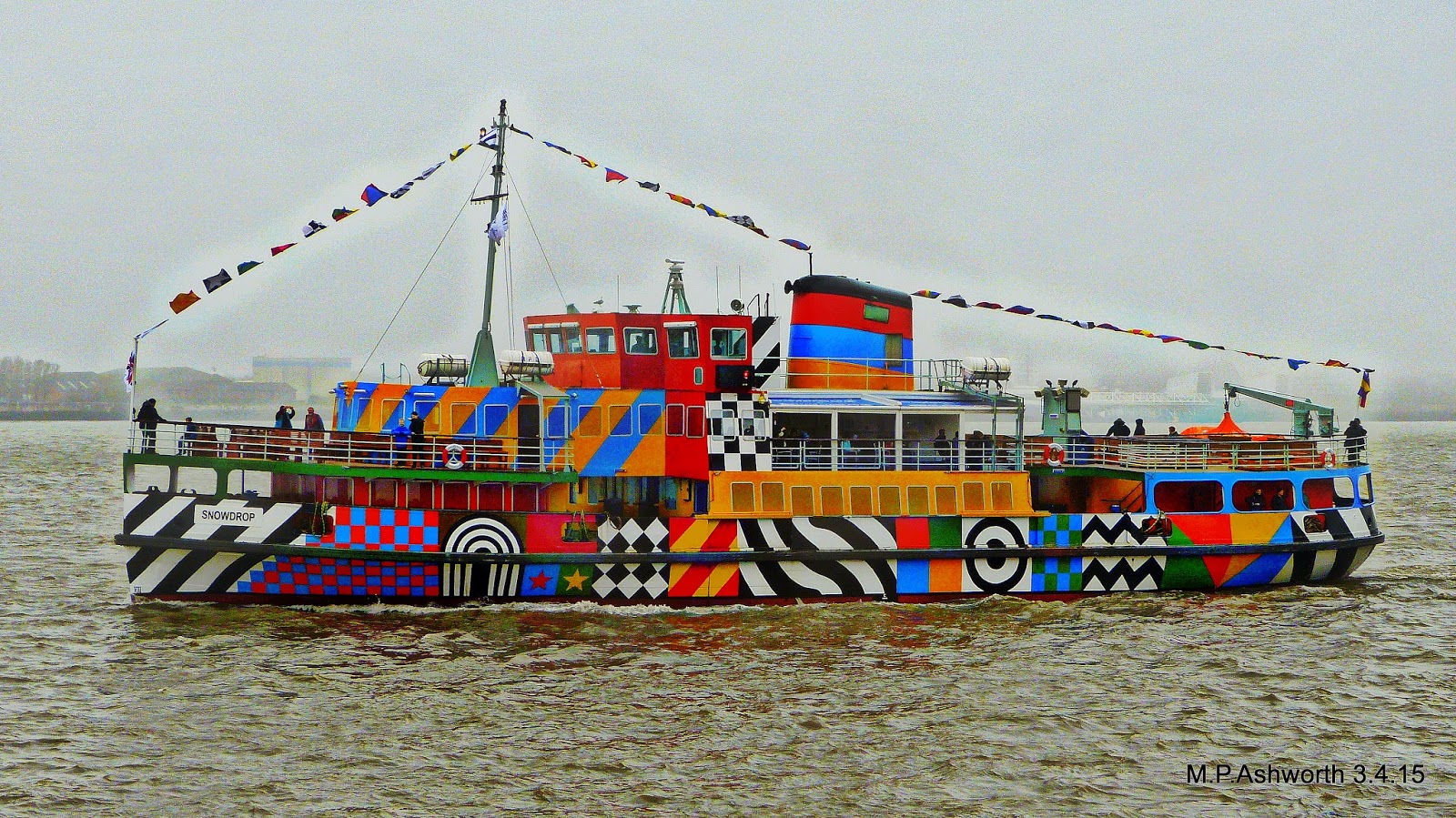 Woodchurch / Snowdrop has served the river for nearly sixty years, a testament to the dedication and care taken by the ferries' staff over the years to keep her in the condition she can be found today.

The refitting of the ferries has extended their working lives by approximately thirty years, and this is steadily increasing with additional repairs that are carried out on a regular basis. 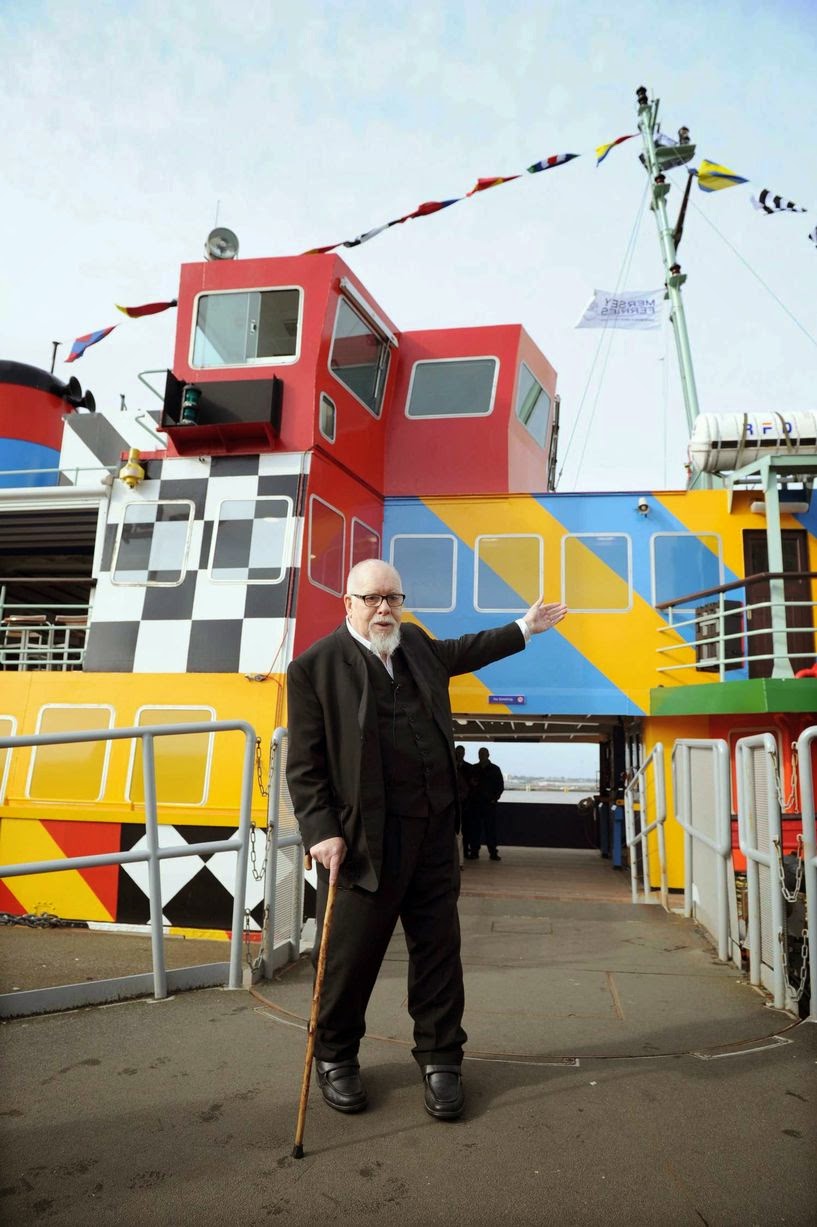 Sir Peter Thomas Blake, CBE, RDI, RA was born on 25 June 1932 in Dartford, England. He was educated at the Gravesend Technical College school of Art, and the Royal College of Art. In the late 1950s, Blake became one of the best known British pop artists.

His paintings from this time often incorporated collaged elements including imagery from advertisements, music hall entertainment and wrestlers

Some of Blake's work was included in group exhibitions at the Institute of Contemporary Arts and he had his first solo exhibition in 1960. In the 'Young Contemporaries' exhibition of 1961 he exhibited alongside David Hockney and R.B. Kitaj. It was here that he was first identified with the emerging British Pop Art movement whose work was based on modern popular culture (music, film, literature, TV) and the mass media (advertising), especially as a critical or ironic comment on the traditional values of fine art. Talking to the Guardian in November 2014 Blake admitted that the humour in his work had always been a mixed blessing: It’s what I chose to do, using graphics and commercial art. To some purists it’s offensive, but I’m a serious painter, and I think within the art world my painting is respected.

A year after Beatle Stuart Sutcliffe's Summer Painting was shown as part of the John Moores exhibition at Liverpool's Walker Art Gallery (and subsequently bought by Moores for £65), Peter Blake won the 1961 John Moores' junior award for Self Portrait with Badges.

Talking about winning what he stresses was very much the "junior" award at the launch of Everybody Razzle Dazzle Sir Peter admitted: I’m very proud of it. I remember coming up on the train and having a party in my room at the Adelphi and meeting the Liverpool poets. It was pre-Beatles, they hadn’t broken yet, but there was a definite vibe in the city and great music going on. 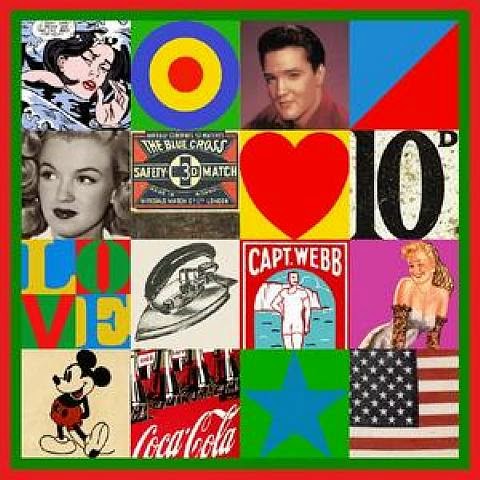 Blake came to wider public attention when, along with Pauline Boty, Derek Boshier and Peter Phillips, he was featured in Ken Russell's "Monitor" film on pop art, "Pop Goes the Easel", broadcast on BBC television in 1962. I wonder whether this title would have any influence on the name of the Beatles own BBC Radio show in 1963?

From 1963 Blake was represented by Robert Fraser, a notable London art dealer described by Paul McCartney as one of the most influential people on the London sixties scene. Fraser's close friendship with members of the Beatles and the Rolling Stones brought Blake into contact with the leading figures of popular culture and led to the commission for which he would become best known. 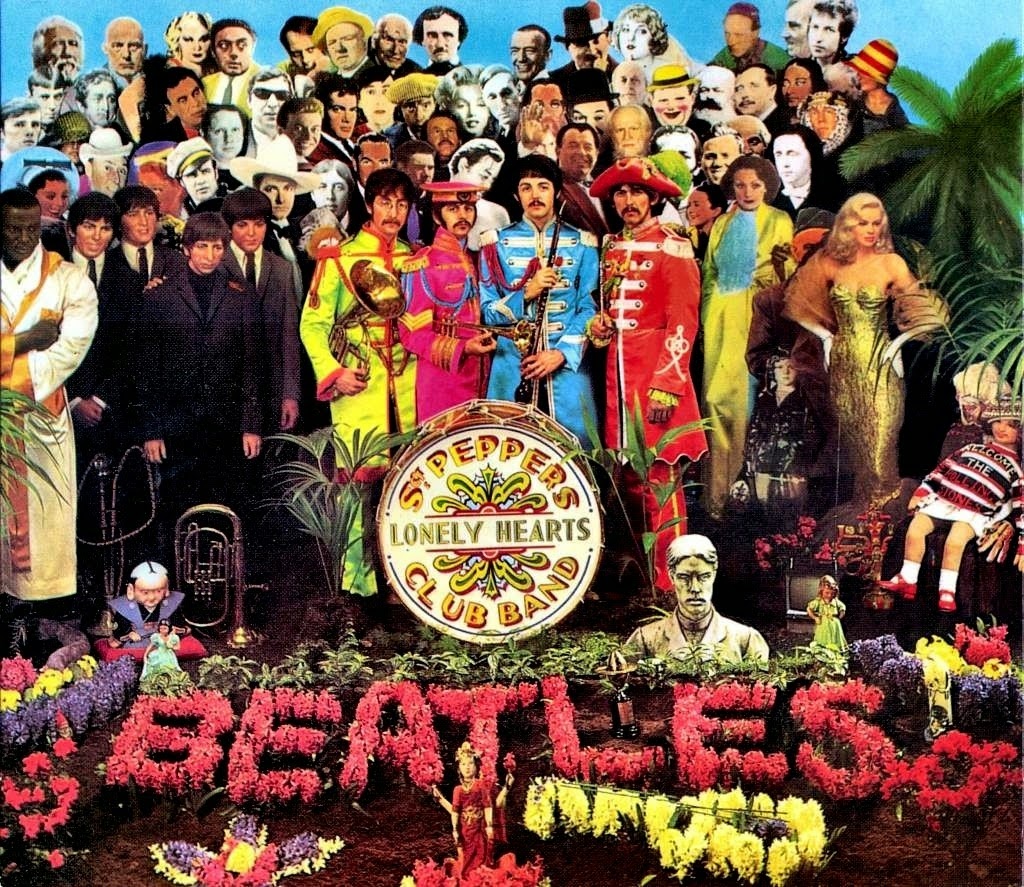 In 1967 Blake co-designed the sleeve for the Beatles'  Sgt. Pepper's Lonely Hearts Club Band with his wife Jann Haworth, the American-born artist whom he married in 1963 and divorced in 1979.

The Pepper sleeve has become an iconic work of pop art and much imitated but remarkably Blake received a £200, one-off fee for the design, with no subsequent royalties. Blake admitted that when (the album) took off I felt that the visual artist (himself and Haworth) should have been rewarded like everyone was. But that’s all in the past. It’s gone. I saw Paul McCartney last night and we hugged; he’s a friend. Now when people say it’s the greatest cover of all time, I celebrate the fact.
(The Guardian, November 2014) 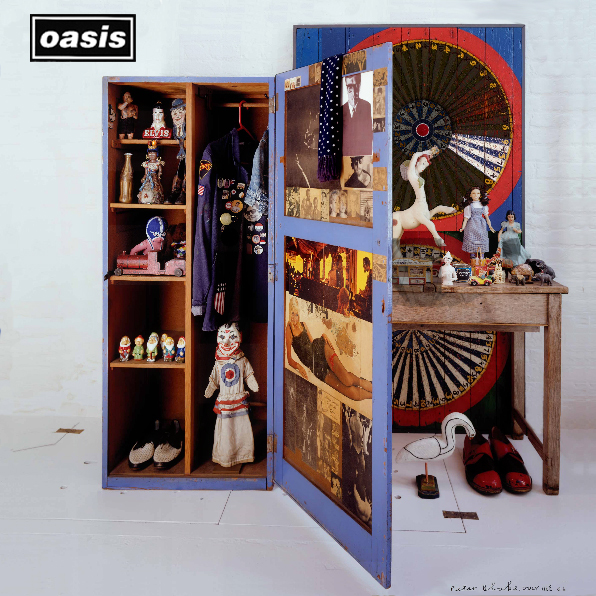 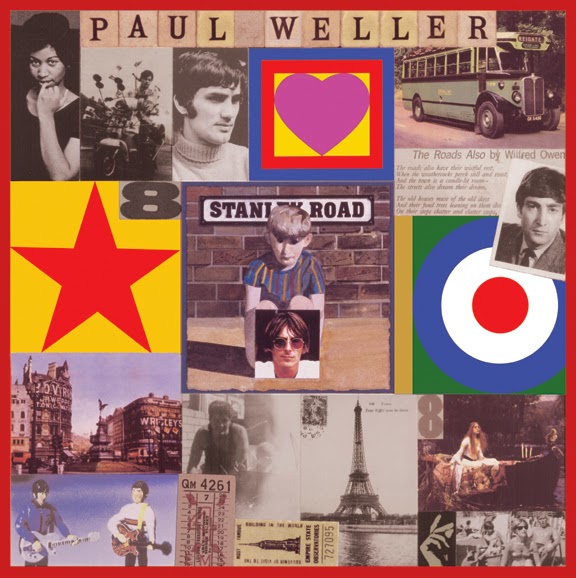 As well as designing the sleeve for the Band Aid single Do They Know It's Christmas? in 1984, Sir Peter has gone on to design album covers for some of my favourite artists including The Who's Faces Dances, Paul Weller's Stanley Road and the Oasis best-of compilation Stop The Clocks.

Sir Peter admits Wherever I go there are men waiting with square plastic bags full of records for me to sign. They’ll ask you to sign something and then whip out four albums – Sgt Pepper, Paul Weller. I know they’ll go straight on to eBay. 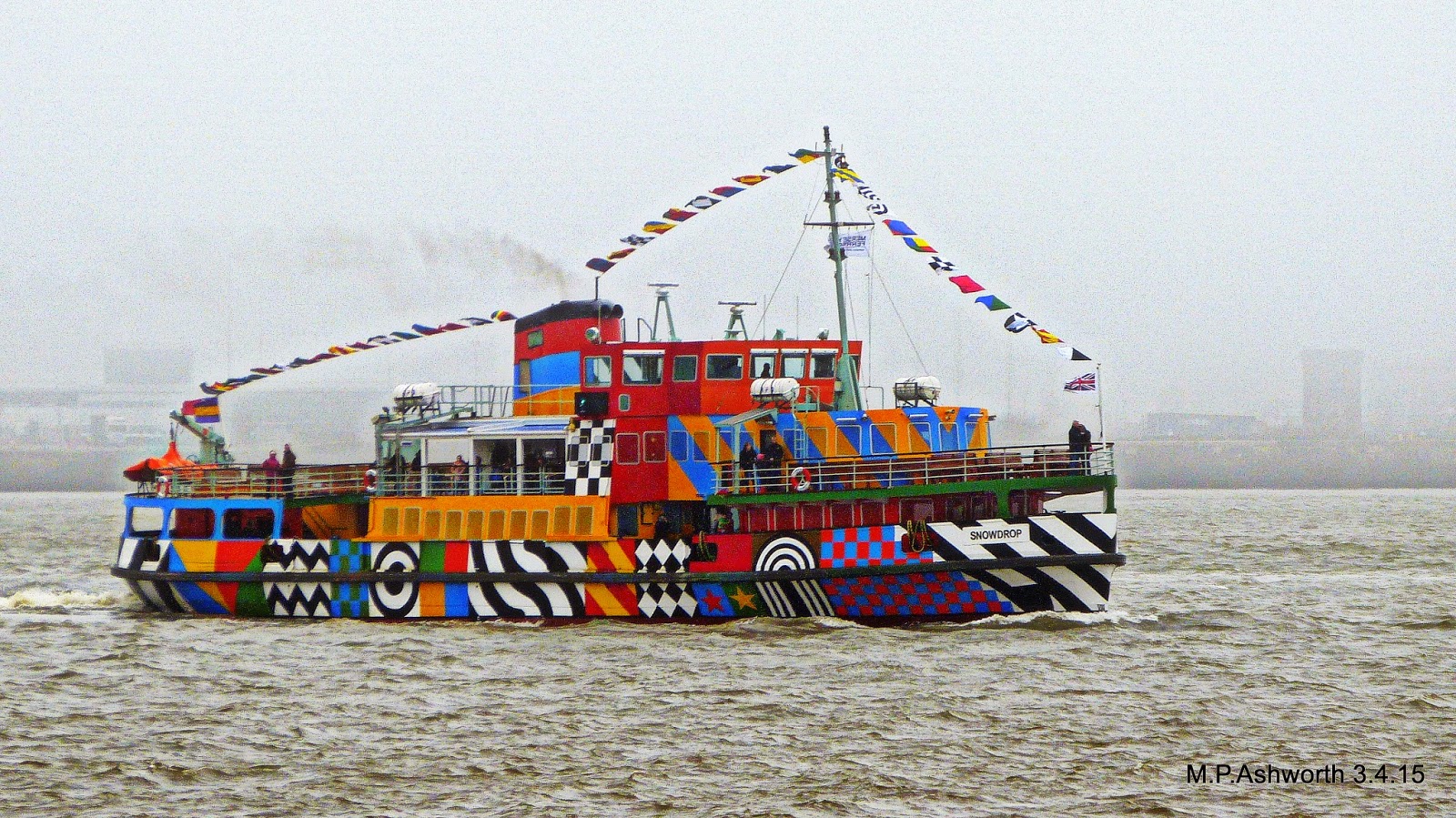 Blakes’ Everybody Razzle Dazzle is the third in a series of Dazzle Ships,  and was co-commissioned by 14-18 NOW, Liverpool Biennial and Tate Liverpool, in partnership with Merseytravel and National Museums Liverpool.

The organisation 14-18 Now, responsible for five years of art commissions marking the first world war centenary, estimate that 8 million people have already seen the other two ships in the series, the Edmund Gardner on Liverpool’s Mann Island (dazzled by the the Venezuelan artist Carlos Cruz-Diez), which was unveiled as part of Liverpool’s 2014 International Biennial, and HMS President, repainted by the German artist Tobias Rehberger and currently anchored on the Thames in London.  Snowdrop is the only vessel that will actually go anywhere. 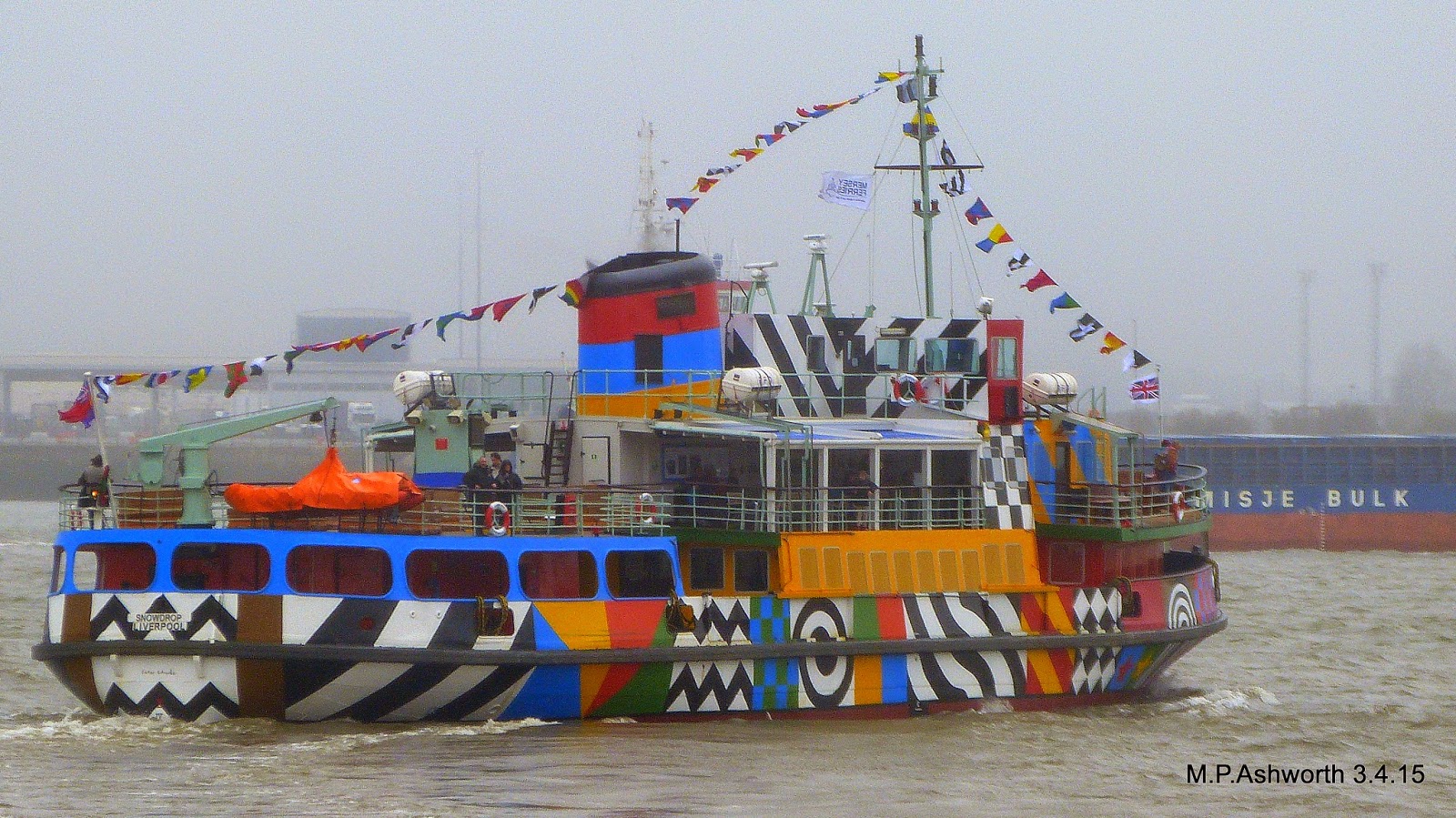 The commission is undoubtedly the biggest of Blake’s long career, but creating it was similar to doing a small watercolour, he said. Working on a computer, he initially planned it all in monochrome but quickly realised it needed colour. It has to be cheerful: it would have been dour in black and white really. I was slightly nervous that there might be some diehards who’d think I’d messed it up, they preferred the old livery. But I was very respectful of it: I checked things like whether I was okay to change the funnel.

Interviewed at the launch Richard Peters, Ship Manager at Cammell Laird said: Cammell Laird is steeped in naval history and played a key role in the First World War. We feel honoured to help commemorate the occasion by ‘dazzling’ a Mersey Ferry after we successfully dazzled the Edmund Gardner last year. The projects provides a meaningful way for Cammell Laird to reflect on the significant contribution the company made to the country during the war years. Our painters are also very pleased to be undertaking a design by Peter Blake who has such a connection with Merseyside through his Beatles work. We are further proud to support the Liverpool Biennial in its efforts to encourage visitors and investment to the region.

Seven ship painters spent 10 days painting the ferry, led by Arthur Hardacre who admitted it had been a bit like a very big paint-by-numbers exercise: It was no big problem really, it’s all paint. It is absolutely fantastic and it’s great that visitors to the Mersey will see such a colourful ship.

Blake was full of praise for those who had done the hard work: We came up about a month ago when they were still working on it. To see it today when it’s all beautifully cleaned and polished is terrific. It is a crazy concept. They’ve done it so beautifully and it looks fantastic. It is very exciting to see it. 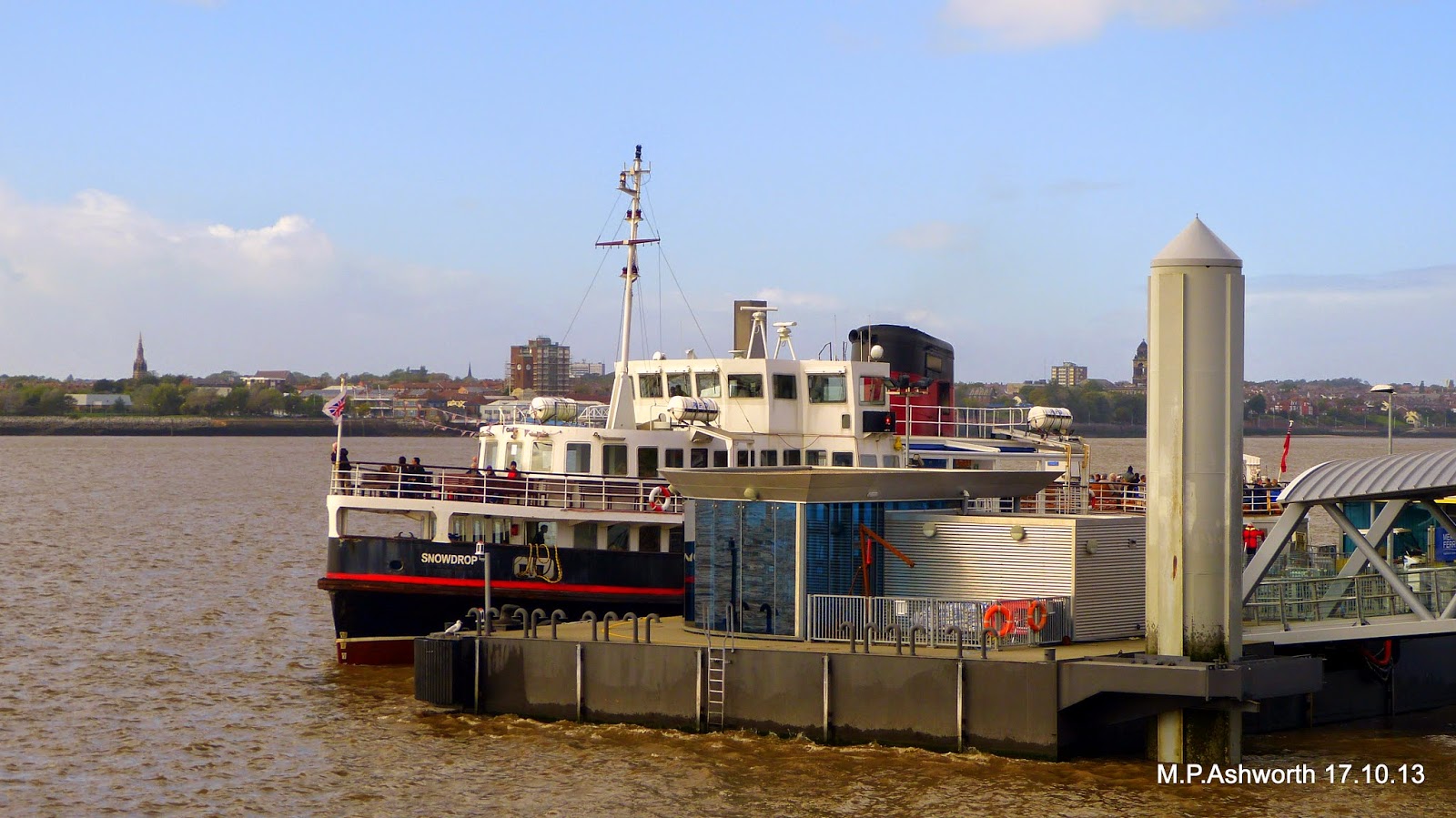 "Snowdrop" before and after her repainting 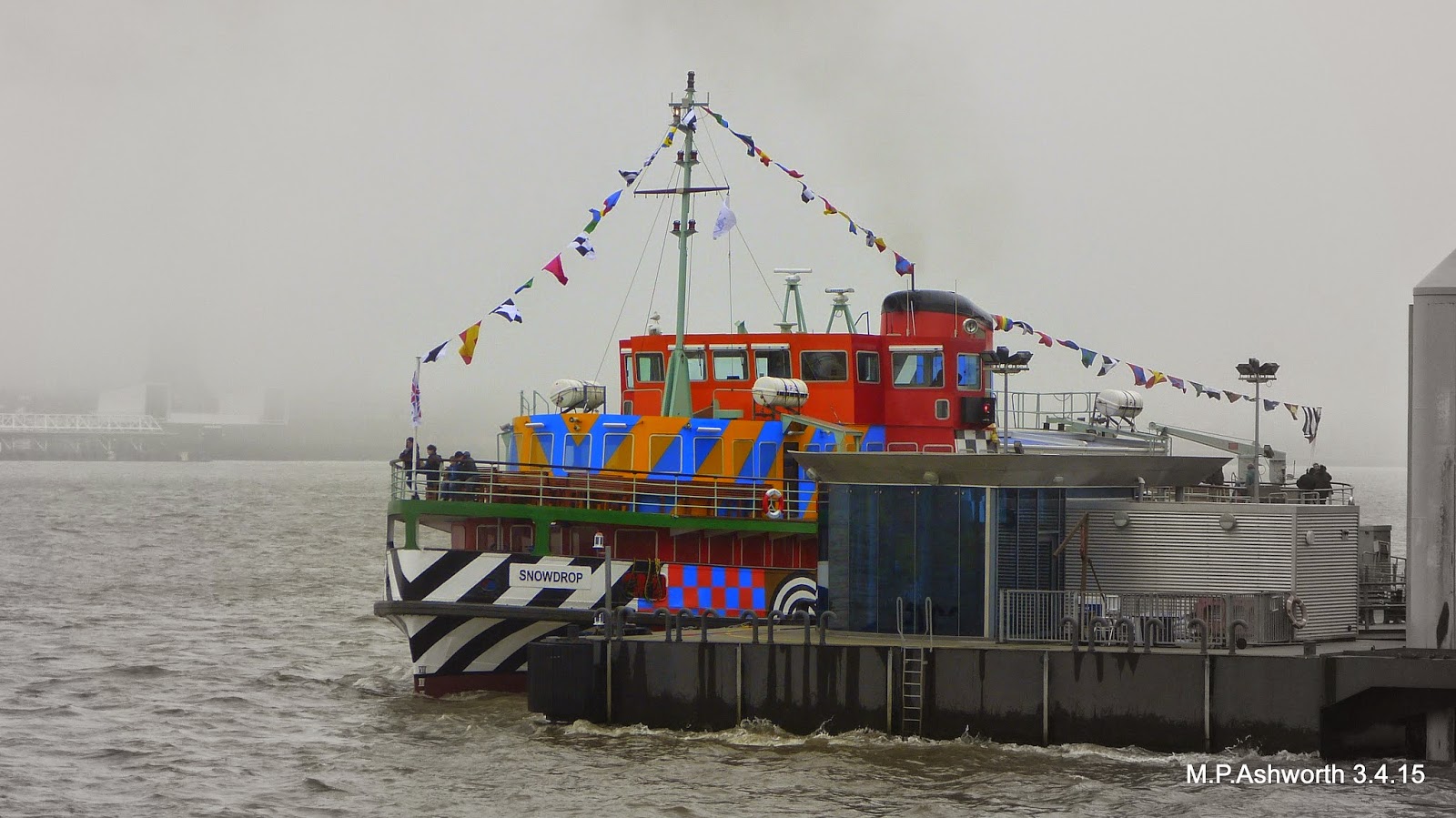 The plan is for Snowdrop to have its Blake livery for two years. During this time it will carry an exhibition on the Mersey’s maritime history in the First World War, when two ferries were requisitioned as troop carriers for a raid on Zeebrugge. 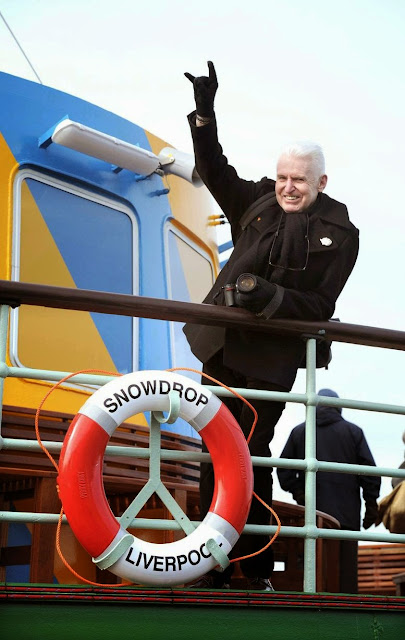 It set off for its first newly dazzled journey on Thursday with Bill Haley and the Comets’ Razzle Dazzle playing on a loop. Joining Sir Peter on board for the launch was Mike McCartney, both enjoying significantly better weather than me (photos of both taken by Andy Teebay for the Liverpool Echo website) 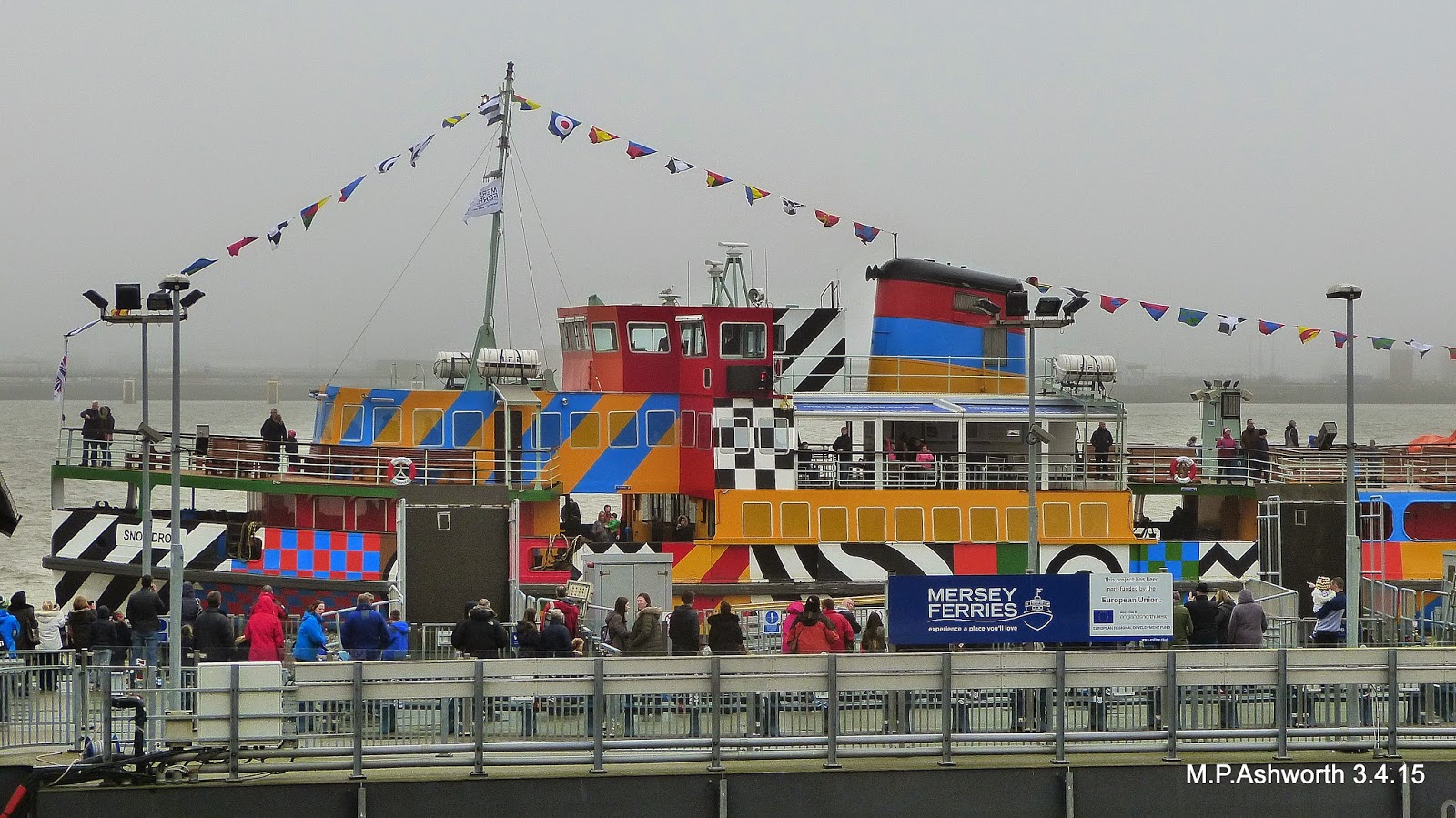 It’s certainly an eye-catching design, full of Sir Peter’s trademark patterns and symbols, although i'm not sure a real “dazzle ship” would have had a target painted dead centre on the hull!