Olivia Harrison: Living in the Material World book and DVD signing at HMV Liverpool One 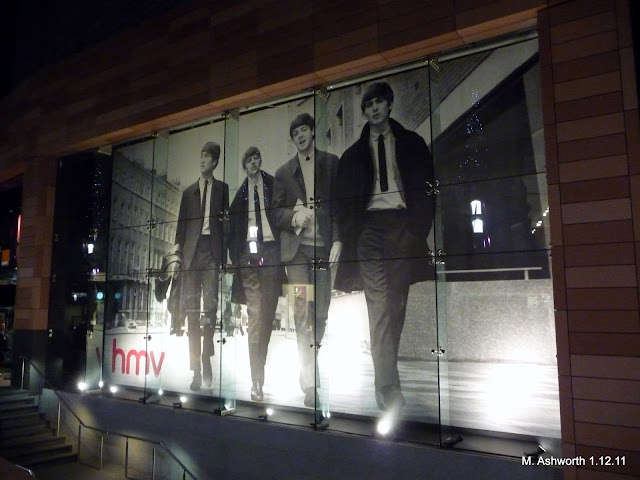 Facebook helpfully reminded me this morning that 5 years ago today I was lucky enough to meet the late George Harrison's wife Olivia at a book signing event held at the large HMV Store in Liverpool One. Here's some photos and memories of the night.

Grammy Award winning producer and philanthropist, Olivia Harrison celebrates the release of her book, and the Martin Scorsese biopic film on DVD and Blu-Ray, ‘George Harrison – Living in the Material World’ with a signing session at HMV’s Liverpool ONE store, South John Street on Thursday 1st December 2011.

This was an opportunity not to be missed.
Leaving my office in Mathew Street later than usual I made my way over to Liverpool One with my mate Stephen to meet up with our usual crowd of Liverpool based Beatles’ friends. I seem to recall some of them were quite near the front of the queue so we joined them, and probably got a few dirty looks from the people behind us. 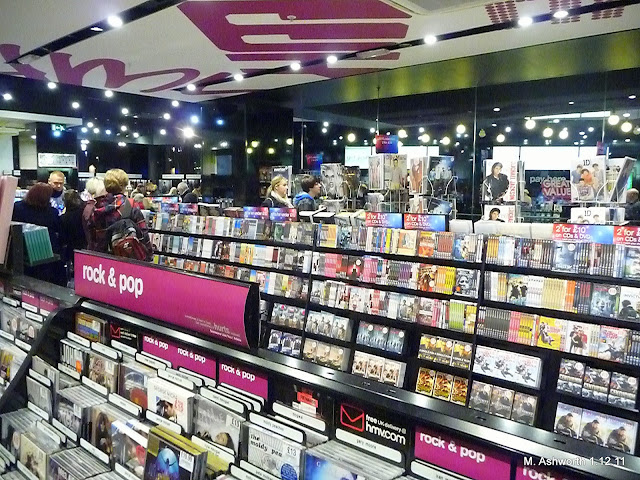 The doors opened around 6pm and we made our way inside where we were advised to queue between the CD racks until we were called forward in turn to meet Olivia and get our books and DVDs signed.  But first we had to buy them...

There are many reasons why George is my favourite Beatle and any new product bearing his name which contains previously unseen photographs or film footage or audio recordings will usually get my seal of approval.

Olivia's appearance was to promote the DVD release of Martin Scorcese's Living In The Material World movie, and her companion book of the same name.

Prior to the release of the DVD the film had been broadcast as a two part Arena special on BBC 2 a fortnight earlier on 11 and 12 November 2011.

I absolutely loved it. With seemingly unlimited access to the Harrison's archive Scorcese uses never-before-seen stills and footage to trace George's journey from his birth in 1943, through his years with The Beatles, his solo career where he juggled music, philanthropic work and a career as a movie impresario, the joys and pain of his private life through to his untimely passing in 2001.

I particularly enjoyed the private home videos, photos and previously unreleased versions of some of George’s most popular songs expertly chosen by Scorcese to underpin the story of the "Quiet One". In fact, Living In The Material World shows that George was anything but quiet.

Both the film and Olivia's book are filled with reminiscences from Harrison’s family including his son Dhani, first wife Pattie Boyd, his brothers Peter and Harry and sister Louise; musicians Paul McCartney, Ringo Starr, Eric Clapton, Tom Petty and Phil Spector; Pythons' Terry Gilliam, and Eric Idle, and many, many others.

The promotional material for the film described it a a profoundly intimate and affecting work of cinema. I wholeheartedly agree. In parts I was laughing out loud, in others I was in tears.

In my opinion Tom Petty had the funniest stories to tell about George, including this one about ukuleles: "He came in with two ukuleles and gave me one. 'You gotta play this thing, it's great! Let's jam.' I have no idea how to play a ukulele. 'Oh, it's no problem, I'll show you.' So we spent the rest of the day playing ukuleles, strolling around the yard. My wrist hurt the next day. But he taught me how to play it, and a lot of the chord formations. When he was going I walked out to the car and he said, 'Well, wait... I want to leave some ukuleles here.' He'd already given me one, so I said, 'Well, I've got this.' 'No, we may need more!' He opened his trunk and he had a lot of ukuleles in there, and I think he left four at my house. He said, 'Well, you never know when we might need them, because not everybody carries one around.'"

By contrast the section where Olivia recounts the night they were attacked in their own home by an intruder and how she fought off the man after he had stabbed George is chilling and left me filled with a new admiration for her. What an amazingly strong woman (and my opinion was reinforced by her candidly talking about having to put up with George's infidelities. “Sometimes people say: what’s the secret of a long marriage? It’s like: you don’t get divorced.”)

Paul McCartney comes across as someone who sincerely loved George, and I personally don't get why some people believe the edits in his interview segments were set up to make him look foolish (implying the Harrison estate wanted to have a dig at Paul).

Towards the end of the Beatles Anthology series there's a bit where a clearly upset Ringo Starr recounts the demise of the group. In Living In the Material World it's Ringo again who gets to pull on the viewer's heartstrings, as overcome with emotion he talks about going to visit George shortly before he died. It's incredibly moving and I don't mind admitting I shed a few tears watching it.

Overall the film is a rare glimpse into the mind and soul of one of the most talented artists of his generation and a worthy successor to Scorcese's Bob Dylan biopic No Direction Home. My only complaint is that even with a running time of 208 minutes it's still not long enough to cover all of George's solo records - there's no mention of the Cloud Nine album for example, which rejuvenated his career in 1987. 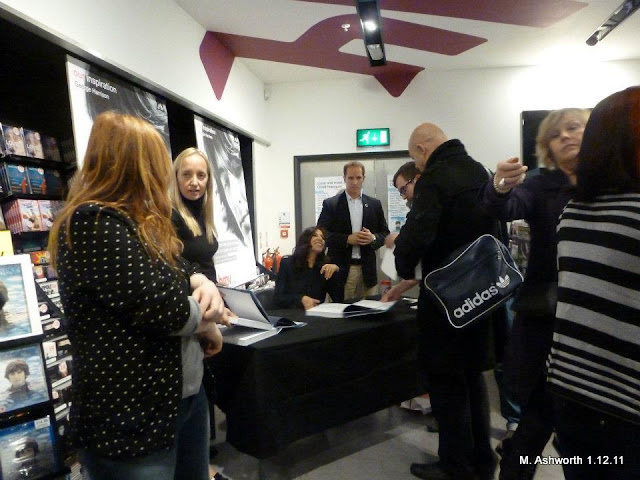 A worthwhile companion to Scorsese’s film, similarly drawing on George’s personal archive of photographs, letters, diaries, and memorabilia, is Olivia’s book which reveals the arc of his life, from his guitar-obsessed boyhood in Liverpool, to the astonishment of the Beatles years, to his days as an independent musician, gardener and motor racing fanantic. It’s a great book, something I was happy to tell Olivia when it was my turn to step forward. 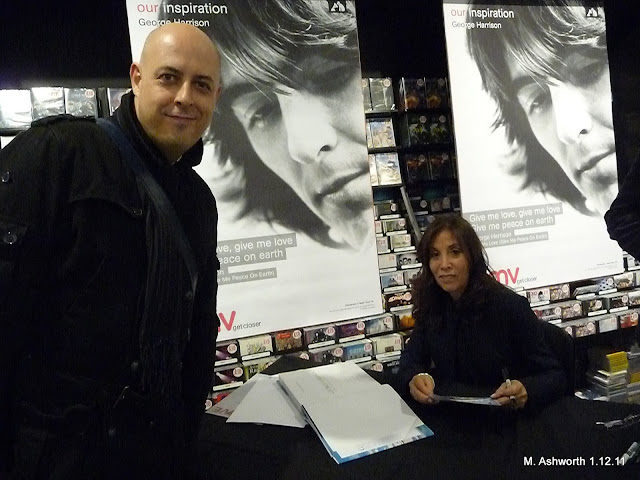 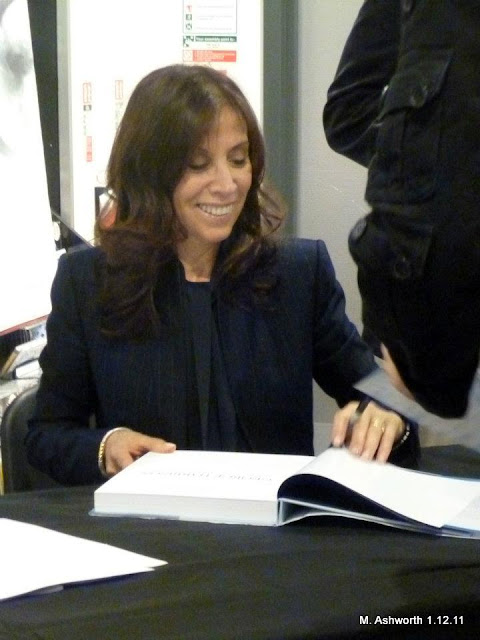 She asked me my name and began to sign. After telling her I enjoyed the film and not really knowing what else to say to her I asked the obvious “How are you doing?" and hoped I didn't come across as a scouse Joey Tribbiani. 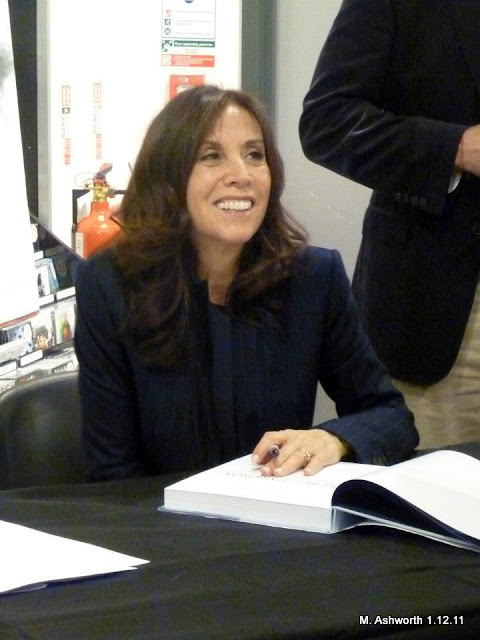 She stopped writing and looked up at me and smiled and then turned to her aide and said 'I love it that whenever I come to Liverpool people always ask how I am'. I said that was good to know. Olivia was charming and gracious and, I suspect, as hard as nails. I thanked her and walked away, hoping Stephen had got a good photo or two of me with her. 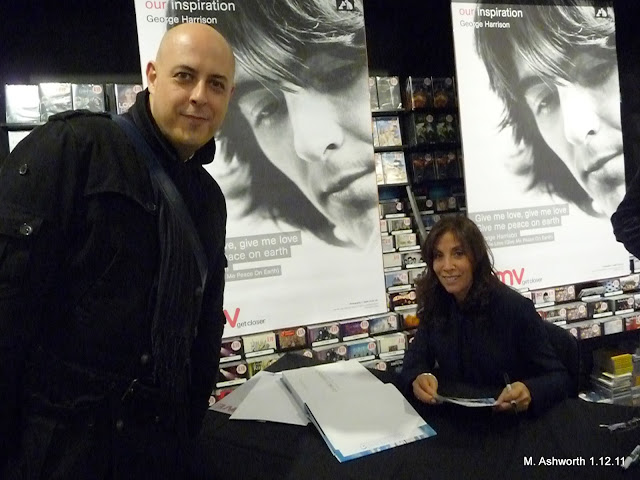 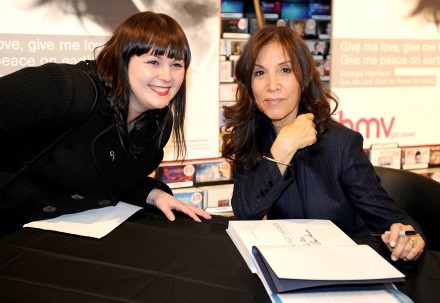 This photo of my friend Ellie with Olivia made it onto the official George Harrison website. She pops up everywhere that girl!! 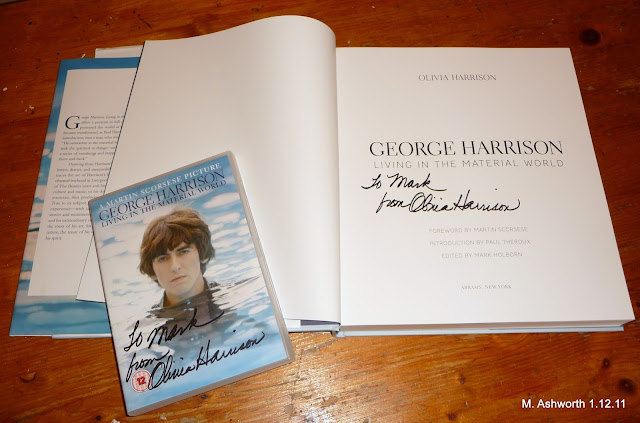