Linda McCartney Retrospective
Walker Art Gallery
William Brown Street,
Liverpool
L3 8EL
The major retrospective of Linda McCartney's photography hosted by the Walker Art Gallery in Liverpool finally opened on 8 August after the original  launch date was postponed by the Covid-19 outbreak.
As is often the case when one of the Beatles (OK, Paul or Yoko on behalf of John) has an exhibition or show in their birthplace there are special extras for the local audience not seen or heard elsewhere. In this case the Walker has a selection of Linda's photographs taken on family visits to Liverpool and the Wirral, some taken in late 1968 during the early months of her relationship with Paul which have never been on public display before.
These images form just a fraction of the 200+ photographs on display which reveal Linda's love for the natural world, her surreal sense of humour and an exceptional eye for capturing the spontaneous [1] and I know that everyone who's visited so far has been impressed.
Of course, the previously unseen photos taken on Merseyside are what I'm particularly excited about and some superb examples have been used by the Walker to promote the exhibition. The photo of Paul and Heather walking around the marina at West Kirby is a particular favourite and one of the 'local' photographs chosen to be sold as a print in the gift shop alongside some of Linda's more well known images such as the Sgt. Pepper launch party 'hand-shake'.
Predictably, all the local prints have already sold out.
The Liverpool photographs excite me the most. It's the little details you can pick up from them, a private trip home we didn't know about, a random place Paul visited that can be added to the list of Beatles' Liverpool locations, the locals he met during the stay.
Unfortunately photography is officially banned in the exhibition. I had hoped that this was because all the Liverpool photos would be included in a book available to purchase at the gallery but sadly I have been told that this is not the case.
Instead we will have to make do with any sneaky shots visitors take and post on-line. Personally I think they've missed a money making opportunity here, especially when, as noted above, the Liverpool photos are currently the best selling prints in the gift shop!
Perhaps there's a book planned combining ALL the McCartney photos taken here by Mike, Paul and Linda. I'd buy that for a dollar. 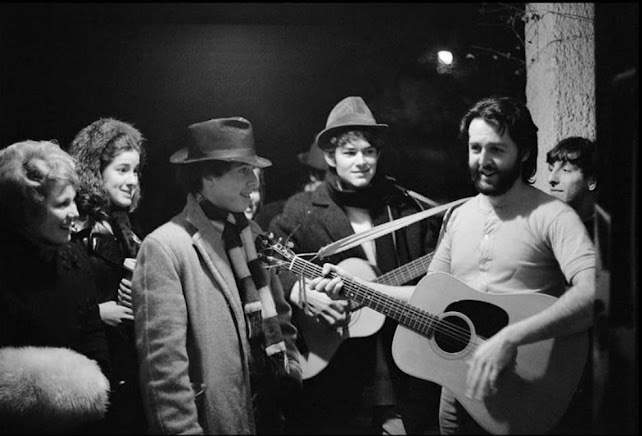 The previously unpublished photo above was taken at Rembrandt, the house in Heswall Paul bought for his father Jim in 1964.
At Christmas 1968, days after Paul, Linda and Heather returned from a holiday in Portugal a group of Carol singers knocked at Jim's house. Can you  imagine their surprise when Paul McCartney answered the door, guitar in hand, and joined them for a festive sing song?!
What's truly remarkable about this photo is that the young man on the extreme right of the photo, over Paul's left shoulder is Neil Harrison.

n 1979, aged 28, Harrison joined the cast of the West End musical Beatlemania, playing the part of John Lennon. In March 1980, after the musical's last West End show, Harrison formed The Bootleg Beatles with fellow cast members Andre Barreau and David Catlin-Birch, the musicians reportedly investing their dwindling finances in two guitars – an Epiphone and a Gretsch – as well as two Vox amplifiers, four black polo-necks and a wig.

From humble beginnings playing their first gig at a small student gathering in Tiverton they went on to perform a 60 date tour of the Soviet Union followed by tours of the Middle East, Israel, the Far East and India before being invited to perform in America in 1984 on the twentieth anniversary of the Beatles first visit.

Initially success in the UK eluded them. They played to small but enthusiastic audiences, eventually building up a following that necessitated larger venues. A gig in Southampton brought them to the attention of self confessed Beatle-nuts Oasis who invited the Bootleg Beatles to support them at their sell out shows at Earls Court in 1995 and the record breaking gigs at Knebworth House the following year where they preformed in front of 125,000 people (including me!). 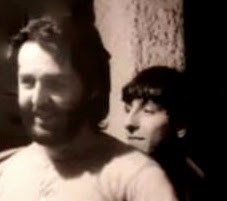 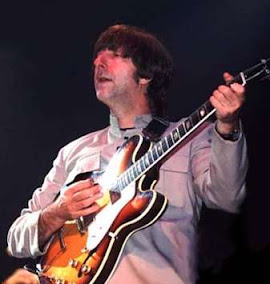 amazed by the existence of the photo as he didn't even know it had been taken! 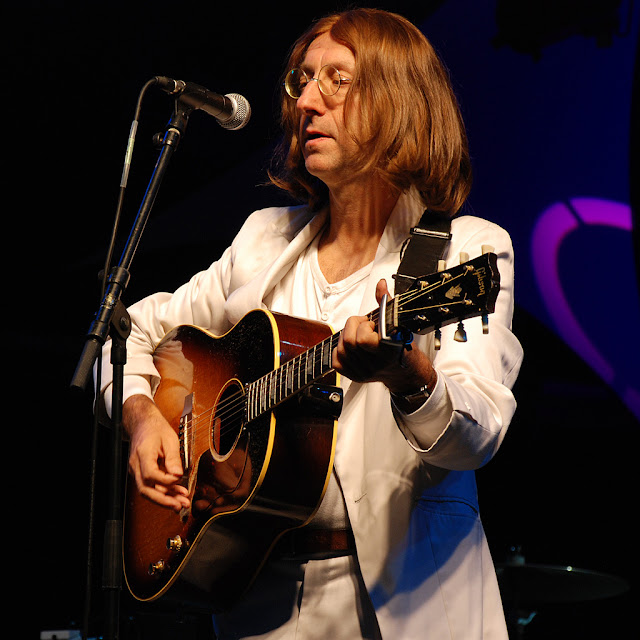