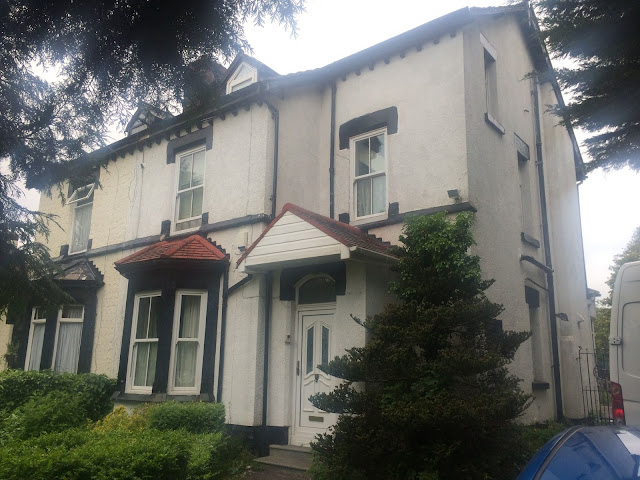 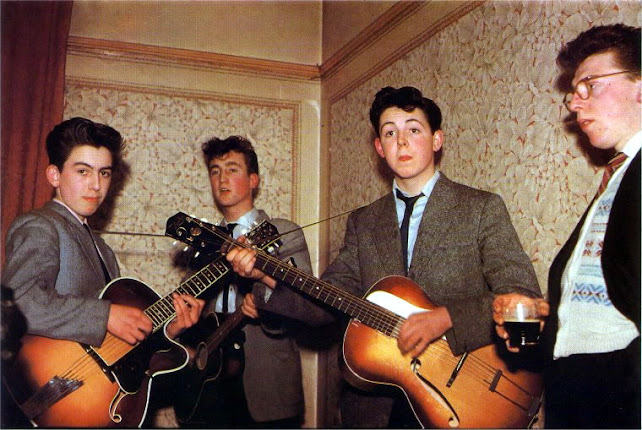 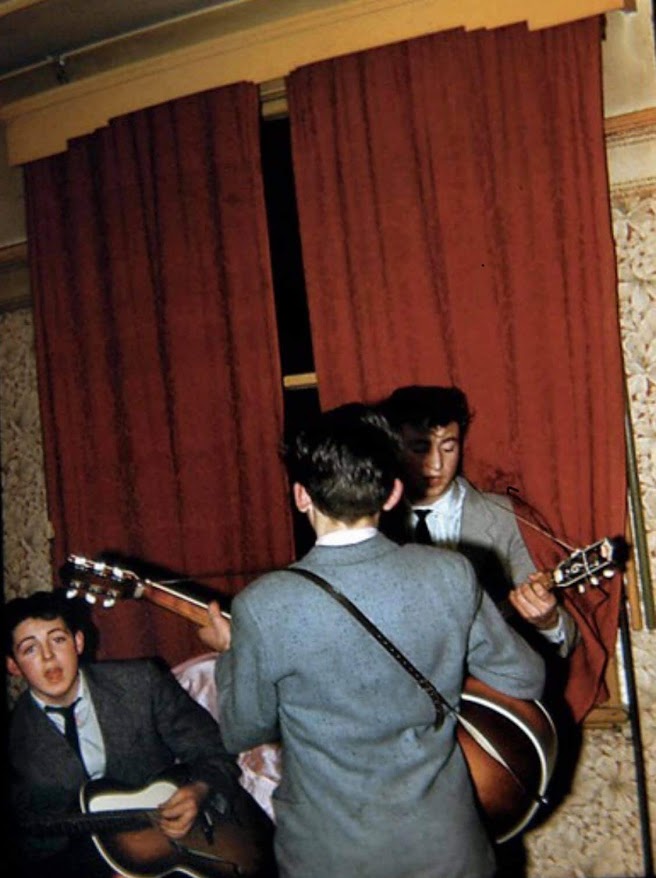 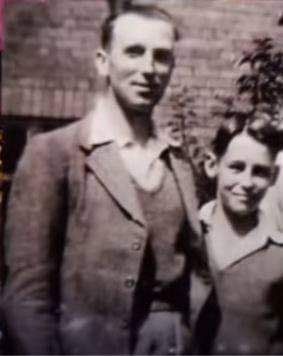 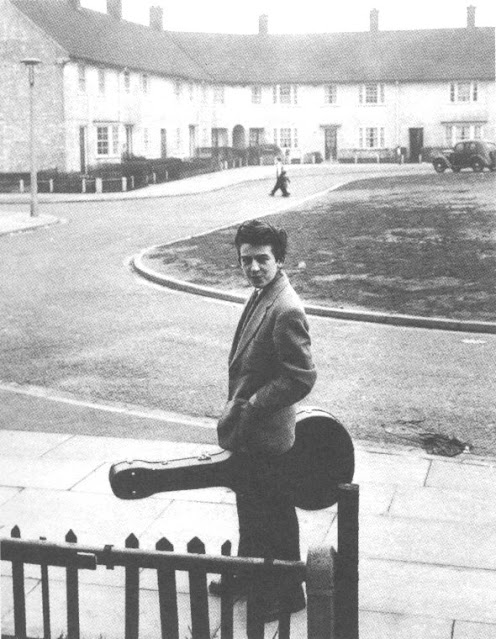 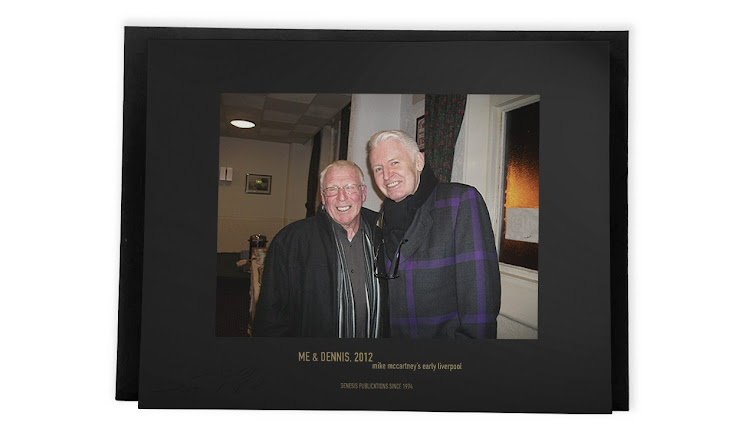 Mike McCartney and Dennis Littler in 2012
Forty two years later Paul played a hands-on role in another Harris family wedding, as reported in the Daily Mail:
You can usually find one at most family weddings.
The jolly older relative who seems to pop up everywhere, keeps things running smoothly - and leaves bemused guests wondering whether he belongs to the bride or groom. But there was no mistaking the identity of this well-wisher at a wedding in Merseyside last week.
Sir Paul McCartney was determined to help his second cousin Sally's register office do go off without a hitch. On the way he had a starring role as chauffeur, photographer, and not surprisingly, even chipped in with some entertainment. In a grey suit and trainers, the former Beatle was accompanied by his girlfriend Heather Mills for a family day to remember.
First on his list of responsibilities was hiring a black Jaguar to ferry his cousin from her home to the wedding and later, with her groom Kevin Murphy, to the reception at her father's home nearby. Sir Paul is said to have taken it through an automatic car wash before the ceremony. Because it was the first time he had used one, he had to wait for the attendant to show him what to do!
Then during the ceremony, there was the traditional duty of making some sort of noise at the vital moment. "When it came to the part about knowing any reason why they should not be married, Paul began clearing his throat as if he was going to say something" said the bride's father, Ian Harris. "Sally's heart was in her mouth and Paul had a big grin on his face."
After that, Sir Paul and Miss Mills joined the throng outside Wallasey Town Hall to congratulate the newlyweds. He snapped away with a camera he had snatched off his brother. Later, Mike McCartney said with "our kid" as chauffeur the day had been a "total family affair".
"Paul hired a nice car for the day and decorated it with wedding flowers," he said. "I did complain that he did not have a chauffeur's cap, though. At least he kept his fun sense of dress with a pair of pumps like those he wore to my wedding 18 years ago."
At the reception, Sir Paul was centre stage again, grabbing a guitar for a rendition of "Fly Me To The Moon". Miss Mills, a former model, displayed another of her talents, accompanying him on saxophone. Despite such a hectic schedule, there was time for a little romance as well. Immediately after the wedding Sir Paul was spotted kissing Miss Mills as they stood on the register office stairs.
"It was a nice kiss - pretty passionate," said an onlooker. "He seems very fond of her and they seem to be in love. Weddings bring out the romantic in people."
(Daily Mail, 26 July 2000, by Kate Hurry)

In a commentary that is honest, revealing and often humorous, McCartney describes growing up in a post-war Liverpool and the cultural sensation that followed. McCartney shares his love of satire, poetry and music, and his experience of being there to photograph the talent that came out of Liverpool, including his own group, the Scaffold. From The Beatles to the Fourmost, and from the Roadrunners to Rory Storm and the Hurricanes, McCartney captured the local bands as well as Liverpool's poets and artists, including Adrian Henri, Sam Walsh and Maurice Cockrill, RA.

In Mike McCartney's Early Liverpool the incredible visiting acts that Liverpool welcomed are also celebrated, including Little Richard, Gene Vincent, Jerry Lee Lewis and Long John Baldry. With each photograph, McCartney gives a fascinating insight into the history of the vibrant city. 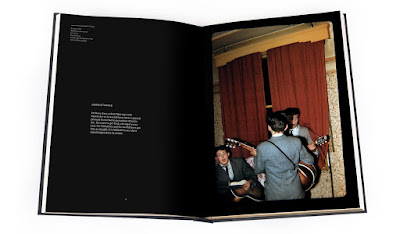 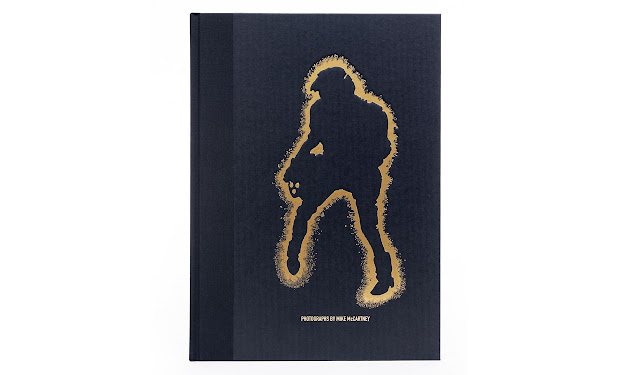 Quarter bound in black cloth, the Collector cover features an original stencil by McCartney, created for a poster advertising an early Beatles gig at the Casbah, rendered in gold foil blocking. The Collector copies also include a double-sided 8"x10" print (200mm x 254mm). On the front, a Kodachrome colour photograph captures John, Paul and George playing as the Quarrymen at a McCartney family celebration in 1958. A friend of the family, Dennis Littler, appears at the right of the frame. On the reverse, Mike McCartney is pictured with Dennis more than 50 years later, in 2012. The print is numbered, stamped, and is suitable for framing.

The Collector copies are housed in an archival slipcase screen-printed with a montage of photographs and original artwork.

Mike McCartney's Early Liverpool is limited to only 2,000 copies worldwide, each signed by Mike McCartney. The first 350 copies are Deluxe copies.

The Deluxe copies are housed in a cloth-bound solander case with original artwork by Mike McCartney in gold foil blocking.

All photos by Mike McCartney except George at Upton Green (c) Harrison family, the photo of 147 Dinas Lane by Ged Fagan and the two B&W photos of the Harris family which came to me via Peter Hodgson.
at December 01, 2020