One of the main aims of this blog has always been to get other people enthused about the subject and get them thinking about some of the places and photographs I've featured in the hope that they will come forward and share their own stories. There must be hundreds of people who knew the Beatles before they were famous or saw them later in one of the venues covered by this blog who have never had the opportunity to have their memories recorded for posterity.

I'm pleased my previous post about Paul and Michael McCartney in Stanley Park prompted such a positive response.

What I didn't expect by solving one little mystery was the possible creation of another.


With the Stanley Park photos of Paul and Michael still fresh in his mind keen eyed Peter Hodgson was reading my earlier post about Oglet Shore when he noticed this photo.

Look at the boys in the background on the left. 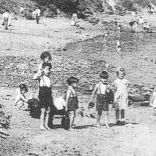 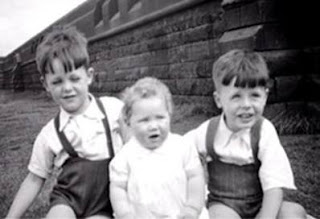 "Notice the two smaller boys wearing braced up shorts, standing with a girl in white?
Paul and Mike?"
The girl on Oglet shore is dressed in white and has ribbons in her hair. 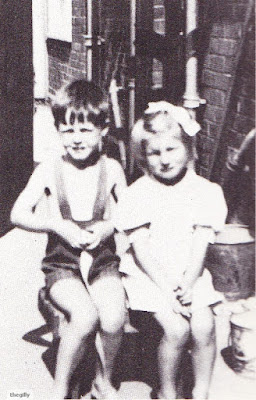 Here's another photo of Paul wearing the shorts in the back garden of his house on Western Avenue, Speke. I wonder who the girl in white with the ribbon in her hair is? In Mike's book "Thank U Very Much" she's simply described as "Paul's earliest fan".  In his later book Remember, she's their little next door neighbour.

Peter Hodgson: "Paul" is facing the camera, Mike looking out onto the Mersey.  Note Mike's bushy hair in the photo (as it is in the second Stanley Park photo and several others from this period)

It's a pity neither parent is in the photo. I would have thought Jim or Mary would have been close by.

Studying the picture the kids in question have just arrived or are about to leave - they are all laden with stuff. There's a taller female behind them with black hair. She appears to be an adult, or at least she has an adult hairstyle.

Liverpool kids have always been at the forefront of fashion so it just might be that in the Summer of 1947 woollen shorts with braces and white ribbons were all the rage.

Imagine if it was them. That would be an extraordinary co-incidence.

Thanks to Peter Hodgson.

The McCartney family photographs are the property of Paul and Michael McCartney.