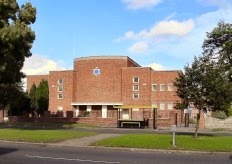 The McCartneys left Speke in April 1956 moving into a council house on the new Mather Avenue estate where Garston meets Allerton. The house in Forthlin Road was built in 1952 and Paul would live there for the next seven years until moving to London. If Speke is where he spent the majority of his childhood, Allerton is where Paul spent his teenage years and it was here that his friendship with John Lennon blossomed. 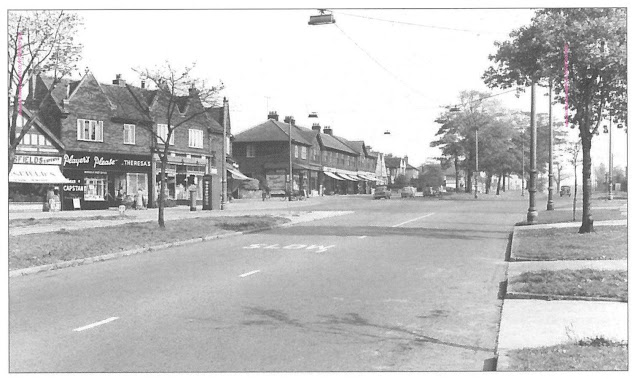 Plans for a synagogue in the Allerton area were conceived in 1950 by the Rev. Hyman Goldman. A suitable plot of land was found on the corner of Booker Avenue and Mather Avenue and purchased for the sum of £1,261.00, some of the funds coming from donations from members of the local Jewish community.It was decided to build a function hall first, the idea being to bring in revenue for the funding of the new Synagogue.

Construction work started on the hall in April 1955 and was completed during 1956 as the McCartneys were moving in less than a mile away.

In October 1958 building started on the synagogue, completed in 1959 and formerly opened in January 1960. 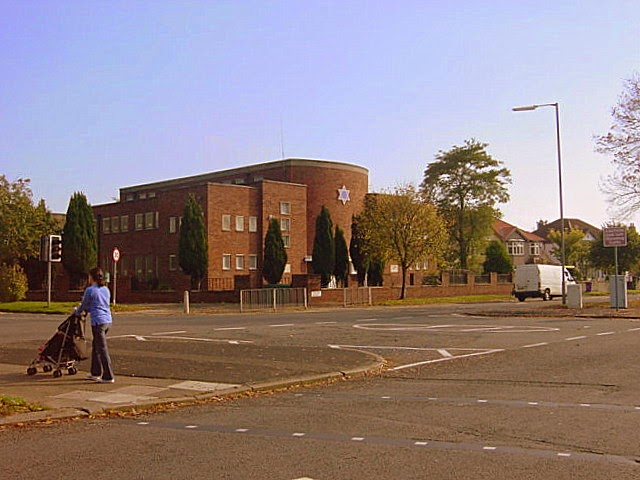 Shortly after Brian Epstein became the Beatles manager he is rumoured to have used his connections in the Jewish community to  arrange a booking for them in the function hall adjacent to the synagogue. According to those who attended the group performed at a Sunday afternoon dance during December 1961.

Sundays fell on 3rd,10th,17th, 24th, and 31st December 1961. The 10th can be discounted because the Beatles were on their way home from London after a disastrous appearance in Aldershot the night before. They had no bookings on Christmas or New Years Eve so they might be likely dates but the Beatles often performed at two and sometimes three venues a day so December 3rd and 17th cannot be ruled out.

Like every rumoured concert appearance in the Beatles' story, until a handbill, advertisement or photograph turns up we can't be 100% sure.

Whatever the date, Paul didn't have far to walk home. 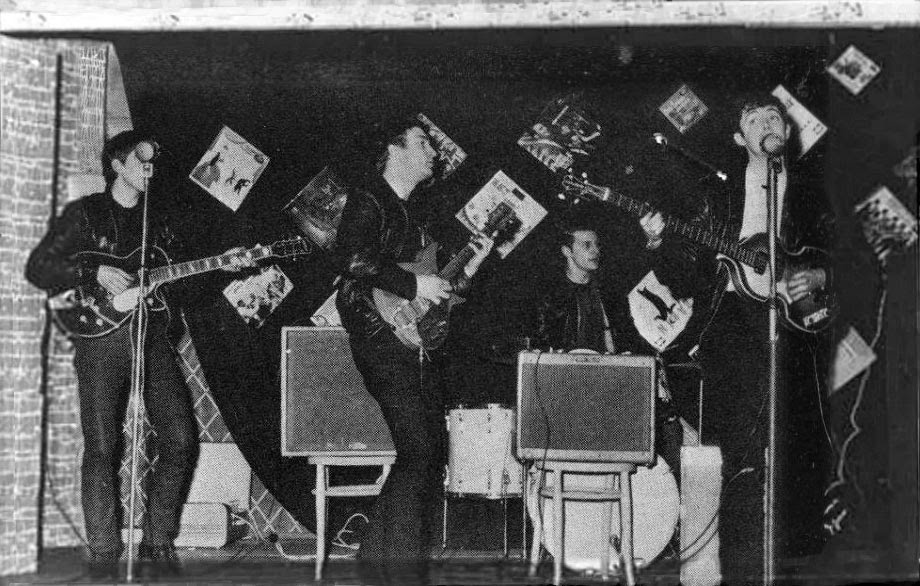 For Paul the quickest route to John Lennon's house was to cross Mather Avenue, go straight up Wheatcroft Road and then cut over Allerton golf course to Menlove Avenue. John would make the trip in reverse. If it was late and they didn't fancy crossing the unlit golf course the longer route was via Booker Avenue, Paul turning right at the Synagogue following Booker Ave into Yewtree Avenue and joining Menlove at the junction with Beaconsfield Road, where Allerton meets Woolton. 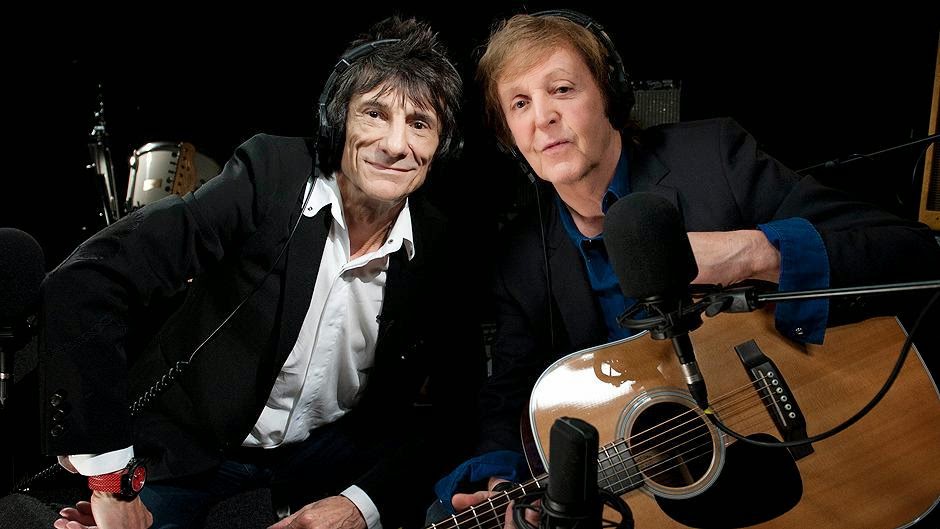 Paul McCartney, it has to be said, has made more than a few TV appearances and given interviews on hundreds of occasions since the Beatles made it in 1963.

It also has to be said that over the last 50 odd years there are inevitably certain stories and events that he will recall time and time again to the point that they have become over familiar due to his constant retelling.  Like how he came to write "Yesterday" for example. If you haven't heard that story, or the one about John Lennon's favourite line in "Hey Jude", or what Steven Spielberg thinks about "Magical Mystery Tour" then simply Google it and you're in for a treat.

It was moment of unrestrained joy for me then when Paul made a guest appearance on Ronnie Wood's radio show in June 2012, televised on the Sky Arts channel, and decided to tell a story I hadn't heard before. Not only that, a story about Liverpool. 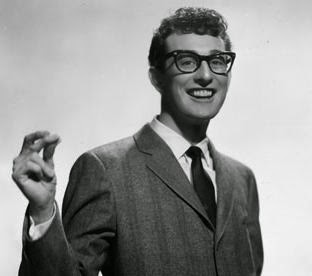 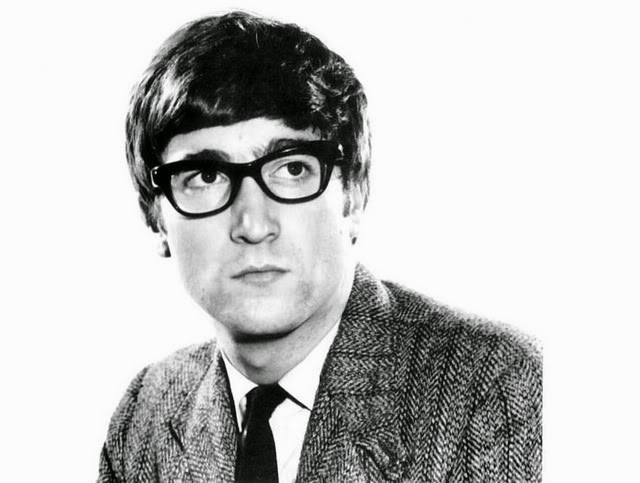 During a discussion about his early influences the subject of Buddy Holly and his horned-rimmed glasses came up. Buddy was especially influential on the bespectacled John Lennon, as Paul recalled:

(Buddy)... Now that was great for John, 'cause John wore horned-rimmed glasses, and he'd y'know, he wore them, but any time there was any girls around he'd whip them off... and then he couldn't see a bloody thing y'know, he'd be like as blind as a bat. And then when Buddy came out it was like "y'know, l'll put these on"  so it was like he legitimised the horn-rims.

Paul: One day we were writing together, John and I, it was around Christmas, and he used to come down to me, and erm, we'd write in the evening and he'd walk back up to his house, which was like a mile away or something, and he's walking back one night, and 'erm, y'know, like I said, if there was any possibility of any girls around he wouldn't wear the horn rims.... and he's walking back...and I saw him the next day, and he said, 'Do you know, those people on that corner of Booker Avenue, they're mad!'

He said, 'What time was it when I left you last night?'
I said, 'I don't know, about 11.30 or something'.
He said, 'Yeah, well I went past their house and they were out, still playing cards in front of their house'.
I said, 'I can't believe this'.
So I go by there later and it's a nativity scene!
Ronnie: He thought they were sitting outside their house...
Paul: Playing cards! It's Mary and Joseph bent over the baby Jesus. I said 'Get your glasses on, man!'
Ronnie: That is the definition of blind as a bat!

No wonder John didn't fancy his chances walking across the golf course at night. 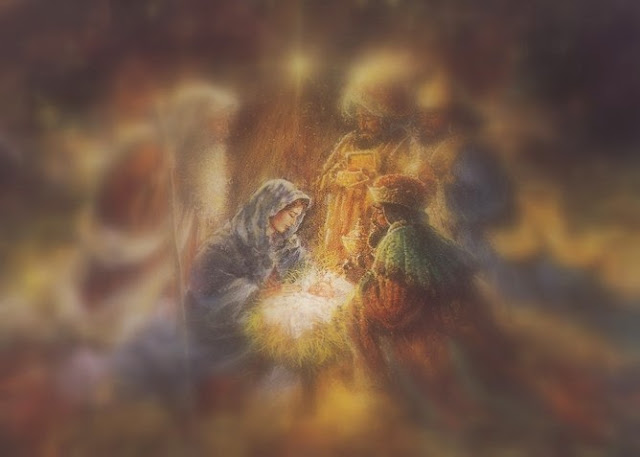 You can watch Paul tell the story in the video above

A new Synagogue now stands on the corner of Mather Avenue and Booker Avenue. The house of cards is thought to be the bungalow with the flag pole on the left of the photo.

If you fancy some local history while you are in this area it's well worth making a short detour down Booker to have a look at the Robin Hood stone, a deeply scored two metre high monolith situated on the corner of Archerfield Road. 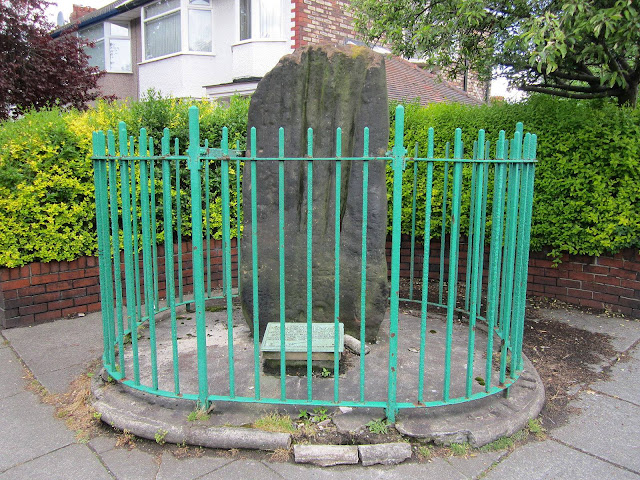 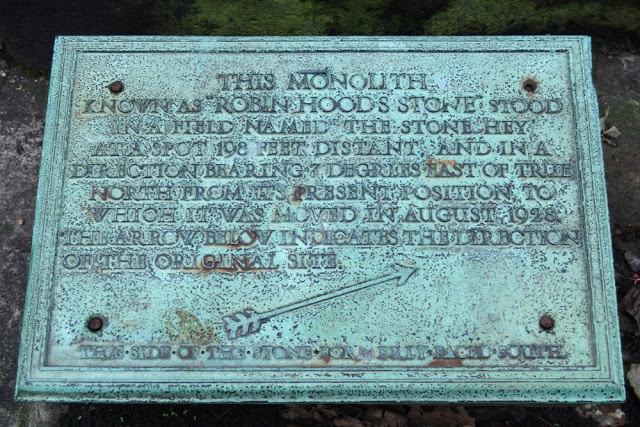 Inscription: "This monolith, known as "Robin Hood's Stone" stood in a field named

the Stone Hey at a spot 198 feet distant and in a direction bearing 7 Degrees east of true north from its present position to which it was moved in August 1928. The arrow below indicates the direction of the original site. This side of the stone formerly faced south"

The stone was moved in 1928 to accommodate a new housing development. The map below shows the original position. 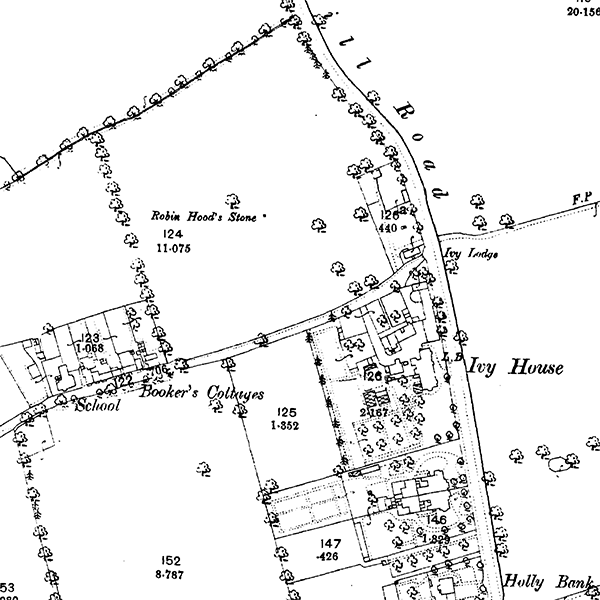 So why is it called the "Robin Hood Stone"?

During the reign of King Henry VIII an act of Parliament was passed in 1512 decreeing that every township had to make a field available for men under the age of 60 to practice archery, thus maintaining a proficiency should the call to arms arise.

Large stones would often be placed in a field specifically for the purpose of sharpening arrows and although Robin Hood is unlikely to have ever done so upon this stone it could suggest how both the Archer Stone and Archerfield Road got their names. Interestingly most of the deep grooves found were on the side of the rock facing the sun indicating that most of the shooting took place from that side of the field - the archers firing their arrows with the light behind them.

Interestingly when the Stone was excavated in 1910 archaeologists found a number of ring and cup markings similar to those found on the nearby Calderstones (six Neolithic or Bronze Age standstone rocks which once formed part of an entrance passage to an early Bronze Age burial chamber) suggesting it may originally have been part of the same tomb.

It may have been removed (or stolen) from the burial chamber by a local farmer in Anglo-Saxon times and placed in his field (or as it was called then, a "Hey" meaning an enclosure for grazing animals) the addition of the stone giving the field its name, apparently so that any of his animals that had an itch could scratch themselves on it!

The cup and ring markings are no longer visible, submerged under the layer of concrete that anchors the rock in its present position.

There were no railings around the archer stone when Paul and Mike McCartney lived in Forthlin Road. I'm sure they knew the story about Robin Hood and it fired their imaginations. 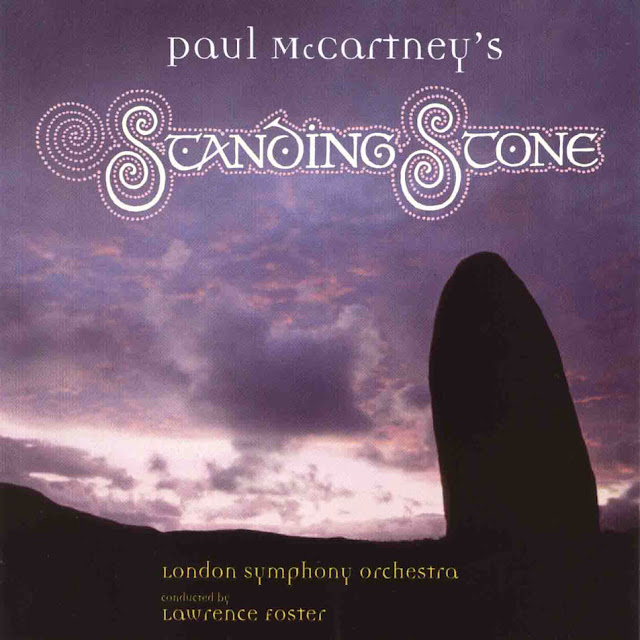 In 1997 Paul released an album of classical music entitled Standing Stone, with the cover showing such a stone in Scotland photographed by his wife Linda in late 1969 / early 1970. It amuses me to think that the first one he was likely to have set eyes on was around the corner from his house in Allerton. 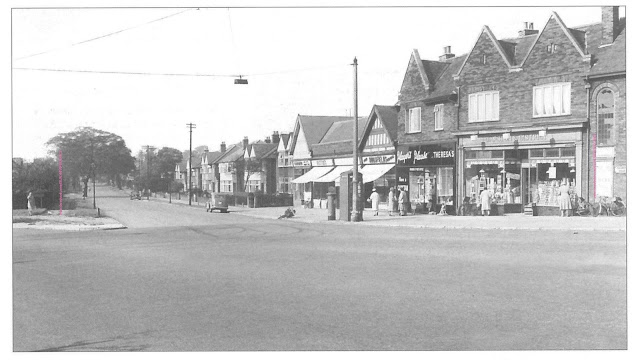 There are also rumours that during the summer of 1961 the Beatles performed at the Max Morris Hall in Greenbank Drive Synagogue near Sefton Park a venue popular for local bands like Derry and The Seniors and the Remo Quartet*. 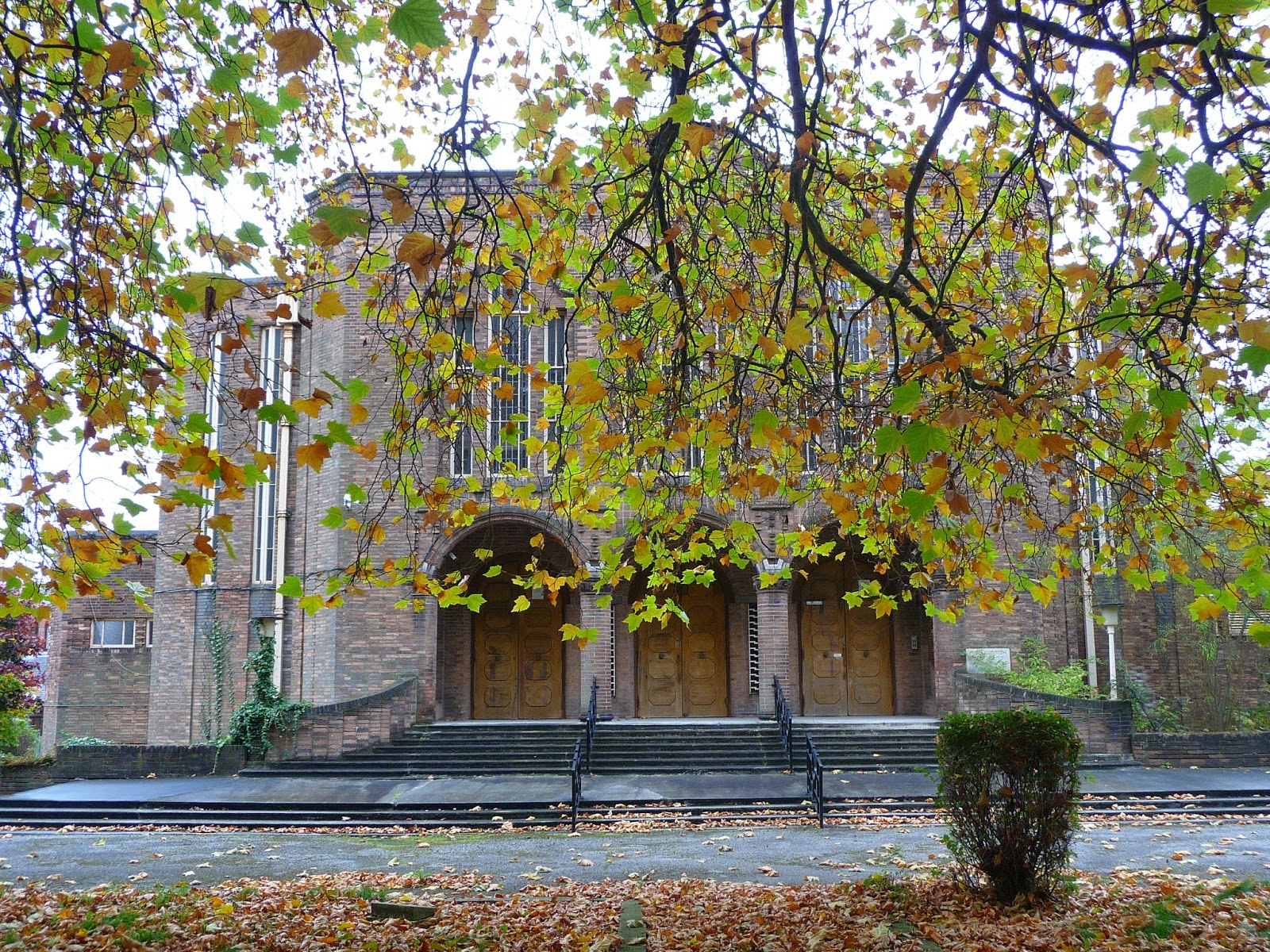 The synagogue had been badly damaged in May 1959 when a burglar had started a fire. The building was subsequently restored at a cost of £50,000 and re-consecrated in 1961. This was the synagogue Brian Epstein's family attended and I have read that the Beatles performance here was as part of a fundraising drive for the repairs.

However, this doesn't fit the established time frame as Brian did not become involved with the Beatles until late 1961 so until further evidence turns up we'll have to file this possible engagement under "Unconfirmed".

What is certain is following Brian's death in August 1967 his body was brought here for a quiet Orthodox funeral. The Epstein family asked the Beatles not to attend for fear that it would turn the private event into a media circus. Following the service, Brian was taken to the Jewish Cemetery on Long Lane, Aintree where he was laid to rest near his father.

*Both played a gig here on 13 March 1960 under a show headlined "Clok-Rok". The Quartet later renamed themselves the more poppy "Remo Four".

The second photograph of the synagogue © Copyright Sue Adair and licensed for reuse under this Creative Commons Licence
at July 30, 2016