Located just four miles from Liverpool city centre, nestled between Wavertree, Broad Green, Gateacre and Woolton, is the former country village of Childwall*. The Childwall Abbey Hotel, All Saints Church and the former Childwall Hall formed the hub of the old village. 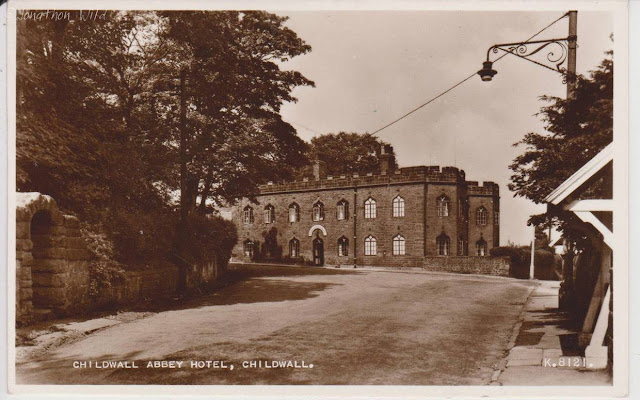 Constructed in the 15th Century, and thought to have been built on the site of an even earlier pub dating back as the Doomsday Book, the Childwall Abbey Hotel is today considered to be the oldest part of the village. 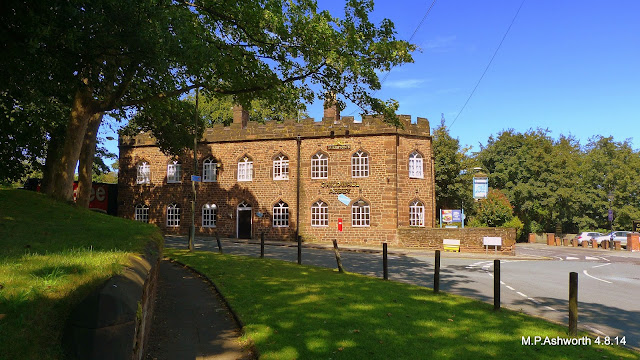 The hotel was ‘once the haunt of holiday-keepers, who resorted in large numbers to the excellent inn’ and has always been a favourite stopping place of distinguished actors** who have been staying in Liverpool. Many of these inscribed their names on the small window panes of the inn’s old Oak room which faces the church. Among the many well-known theatrical names to be found are those of Henry Irving, Ellen Terry, E.J. Willard, Ruth Vincent and J.M. Barrie. Irving was fond of smoking a cigar in the old room facing the garden with his friend John Lawrence Toole, and Ellen Terry was never so happy as when she was roaming through the beautiful old gardens with its bowling green, where, if tradition is to be believed, bowls and quoits have been played long before the days of Sir Francis Drake and Sir Walter Raleigh.

The Abbey hotel also once had a framed collection of valuable autographs presented to Mrs Rimmer, the former proprietress of the Childwall Abbey Inn who was held in high esteem by friends of the Marquess of Salisbury. Remarkably these included Queen Victoria, the King of Hanover, the Duke of Wellington, and Sir James Brooke the Rajah of Sarawak in Borneo amongst many other royal and noble names. 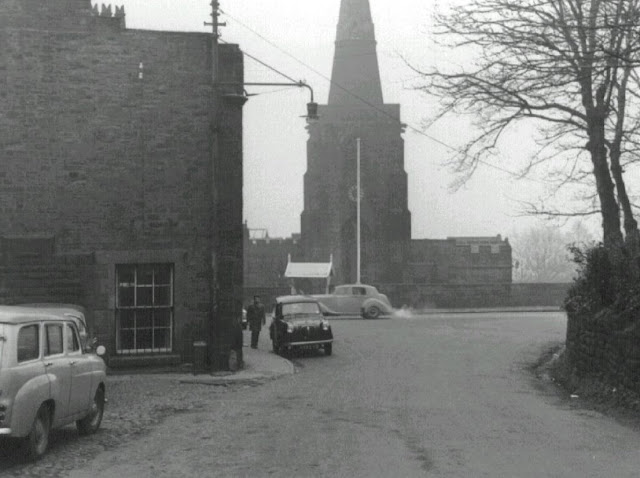 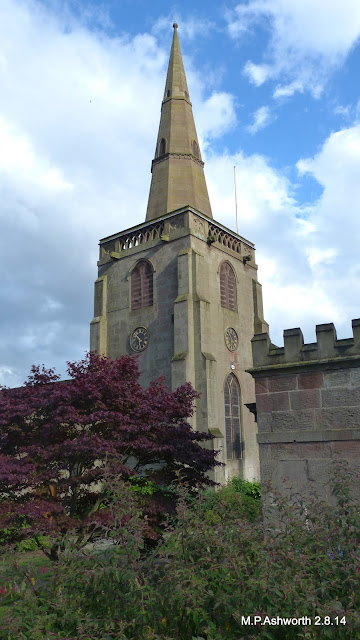 All Saints Church is a designated Grade 1 listed building and is the only medieval church remaining in Liverpool with the chancel dating from the 14th century and the south aisle and porch probably dating from the 15th. The tower and spire were built in 1810-11. A restoration of the church was carried out by W. Raffles Brown in 1851–53. The rebuilding of the north aisle was by James F. Doyle and he added a vestry in 1905–06. 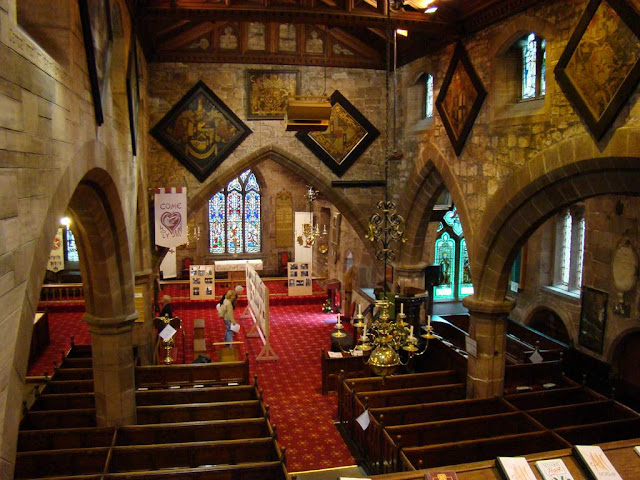 The Victorian stage actor Henry Irving was greatly interested in the many quaint epitaphs which are to be found in the Churchyard, especially this curious epitaph  - "Sacred to the memory of John Jones, who departed this life in his 95th year, June 1st, 1517. My sledge and hammer both decline, my bellows they have lost their wind, my fire is extinct, my forge decayed, and the dust in my vice is laid. My coals are spent, my iron is gone, my nails are driven, my work is done". 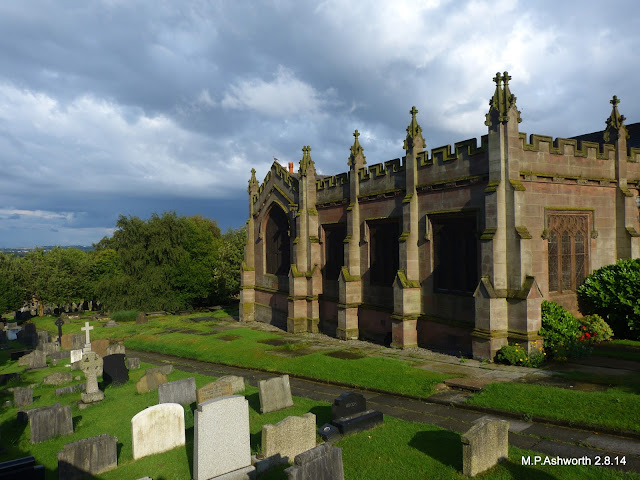 A number of illustrious people are buried here including Margaret Beavan, Liverpool’s first female Lord Mayor (1927-28) of whom it was remarked “Liverpool in all its history has never produced any woman who has done more for its weal”; John Charles Ryle, the first Anglican Bishop of Liverpool in 1880 who died aged 84 having “worked to exhaustion”; the brewer Sir Andrew Barclay Walker; members of the Norris family from Speke Hall (despite them being Catholic); the poet William Watson; six service personnel from the First World War and six from the Second, and at least six members of my maternal family. 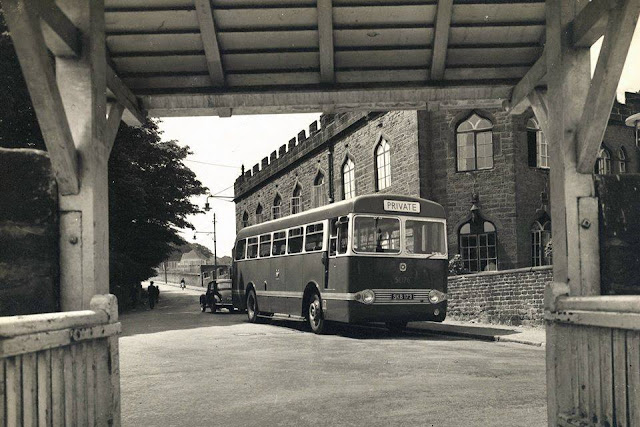 The Childwall Abbey Hotel viewed from All Saints. 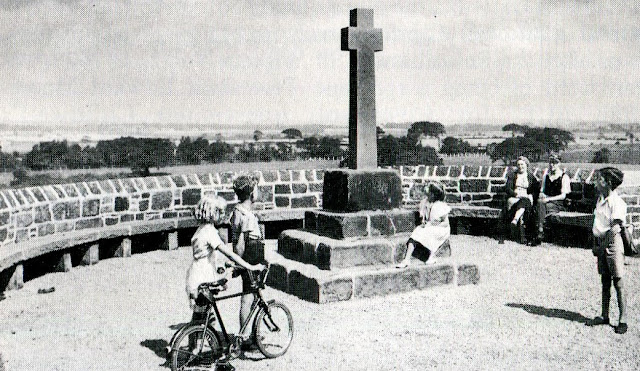 Just along Childwall Lane from All Saints is the ancient Childwall Cross. For many years its shattered pieces lay strewn about the field with only the base remaining intact. It was restored in 1936 on a hillside which once boasted some of the finest valley views in South Lancashire. Sadly, much of this vista of farms and open countryside where ferns and bluebells once grew is sadly buried under housing estates. 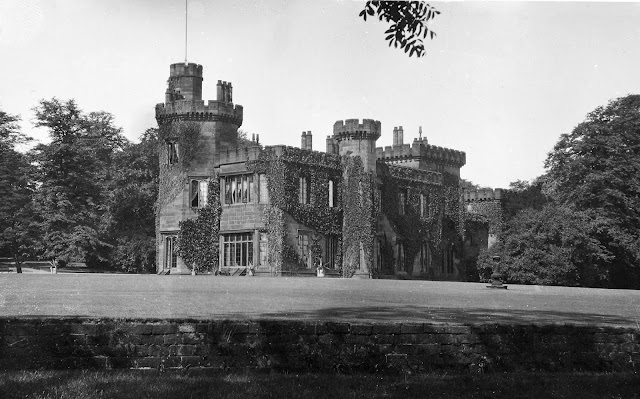 Childwall Abbey Road and Childwall Lane border two sides of Childwall Woods, the former site of Childwall Hall which was built in 1780 for Bamber Gascoyne, the M.P. for Truro as a residence for his son, Bamber Gascoyne jr, who was M.P. for Liverpool between 1780 and 1796. The hall was known locally as ‘The Abbey’ probably after the building was extended in an ecclesiastical style but....despite there being a Childwall Abbey Road and a Childwall Priory Road there is no record of there ever being a monastic house in Childwall! When the correct name Childwall Hall increased in popular use it appears the old nickname was transferred to the adjacent Inn, which has similar Gothic stylings. It has remained in place ever since.

The HalI was demolished in 1948 after falling into a ruinous state with dry rot. The site is now occupied by Lime Pictures (formerly Mersey Television), who film the television soap Hollyoaks here. It was also the site of the shopping parade and petrol station set from the former soap opera Brookside. When I last took a walk through the woods I found the old set was still there.

For a few months over the winter of 1958-59 the three core members of the Quarry Men decided on a name change. During a brainstorming session for a new name at 20 Forthlin Road suggestions such as the Polecats, the Ravens and the Jackdaws were considered and quickly discarded. Instead they settled on the Japage 3. Pronounced Jaypage the name derived from their first names - J (Jay) for John, Pa for Paul and Ge for George, the ‘3’ because they were now performing as a trio.
Their first engagement under this new moniker was here at the Childwall Abbey Hotel on Saturday 20 December 1958, playing at the wedding reception of George's oldest brother Harry and his new bride Irene (formerly McCann). 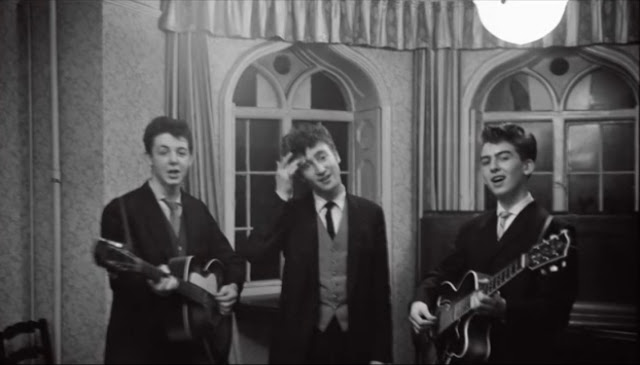 They performed in the front bar / smoking room of the hotel, John without a guitar, framed symmetrically by Paul and George. Probably under Paul's tutelage they assumed a uniform look of dark suits and impressive quiffs.

George would later recall they were drunk. This was unfortunate because, as Paul McCartney would also learn, inviting John Lennon to a family party was risky. Five months after losing his mother in a road accident Lennon's behaviour was troublesome and with too much drink inside him he would often become obnoxious. George had thought it was worth the risk - this was an opportunity for the Japage 3 to perform in front of a relatively receptive crowd. 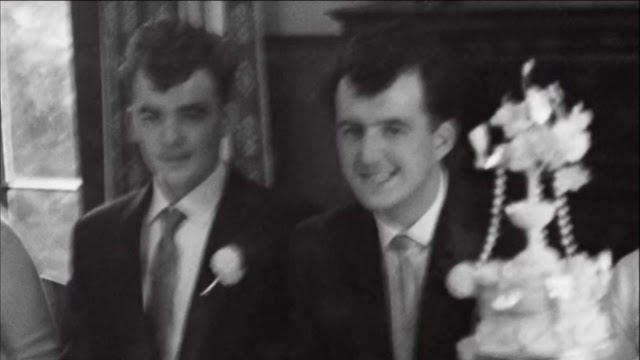 Harry Harrison: Our Wedding was just one of those occasions where they thought they would practise on people and see what happened. They were not exactly...what the majority of the people there expected. They had a tea-break and an elderly lady who was one of the guests came along to play the piano who was a real pub player, she could really hammer out tunes that everybody wanted to sing to. The three lads reappeared from the bar, pints in hand, and John just poured a pint over this lady’s head, just straight over the head saying ‘I anoint thee David’ and just walked away.. and this lady surprised me because there was absolutely nothing.. just no reaction she just smiled, and got up and went away and got dry again, y’know, and I thought it was funny because in those days people used to say ‘oh has he had a wedding in Liverpool? How many fights were there?' but like there wasn’t even a fight, y’know the nearly fight was John Lennon pouring a pint on her head. (from an interview in the Living in the Material World DVD)
Indeed, such outlandish behaviour was so typical of a Liverpool party that the guests barely batted an eyelid. Certainly no one appears to have admonished John for his actions. 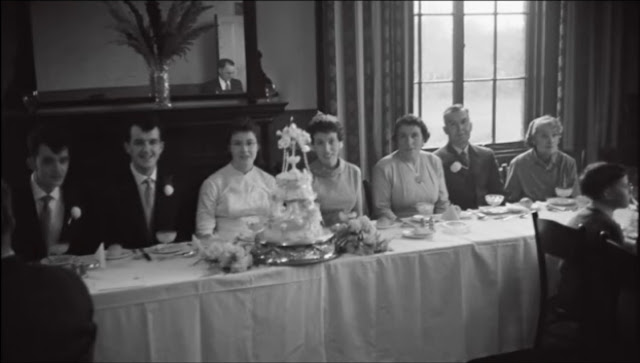 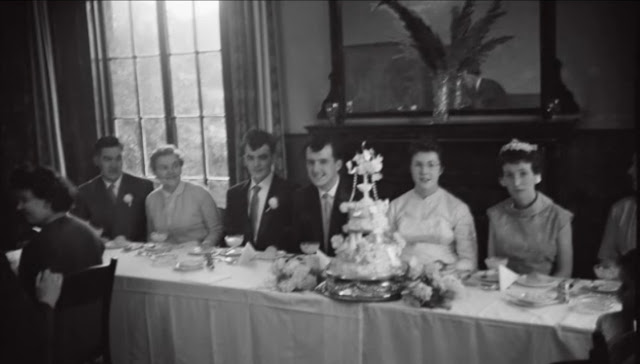 The Harrisons, 20 December 1958 - Parents Harry and Louise, brother Peter, Harry and his new wife Irene and her Chief Bridesmaid. The photo below shows the same room today, 60 years later.

For more information on the Childwall Abbey, to perhaps take a pint or stay over in the historical building, please visit the website here.

**Today the haunt of less distinguished actors such as those from the television soap ‘Hollyoaks’ which is filmed on a studio set built on the former site of Childwall Hall.