"We are not happy with her Queen Victorious Monologue..." 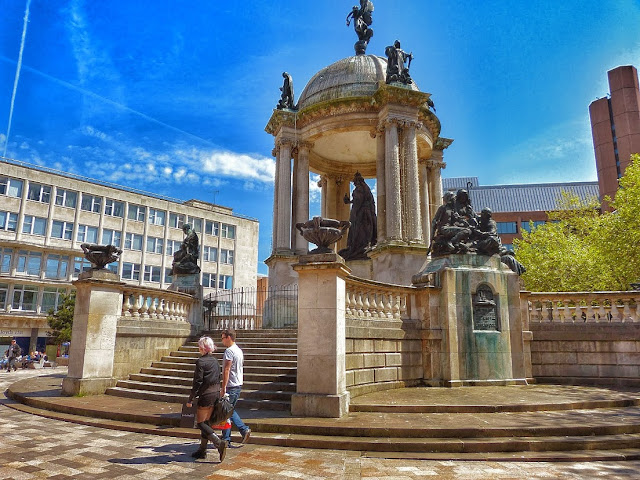 Built on the former site of the old Liverpool castle and the 18th century St. George's Church, this ambitious domed monument to Queen Victoria was intended to represent the 'spirit of patriotism of Liverpool's citizens, as well as the national self-confidence that Victoria's long reign had engendered'.

The stonework, the podium upon which the Queen stands and the columns and dome that protect her were designed by Professor F.M. Simpson of the Liverpool School of Architecture, with Willink and Thicknesse.  Their neo-Baroque monument of Portland stone provides a setting for sculptures by Charles John Allen, including a colossal 14.5 ft (4.42m) figure of the Queen, groups of figures on the enclosing walls representing Agriculture, Industry, Education and Commerce, and four allegorical figures above the columns personifying Victoria’s personal virtues of Justice, Wisdom, Charity, and Peace. A final bronze figure at the very top of the dome symbolises Fame. 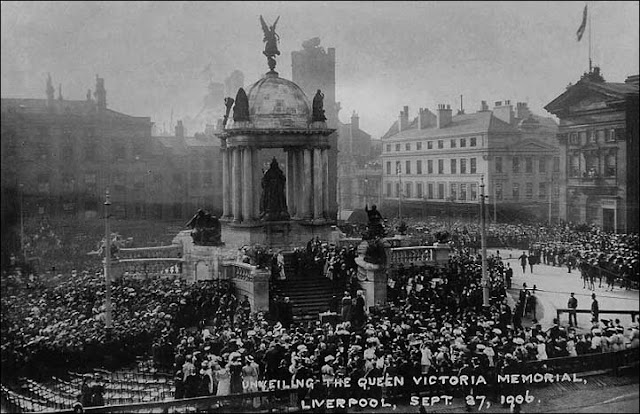 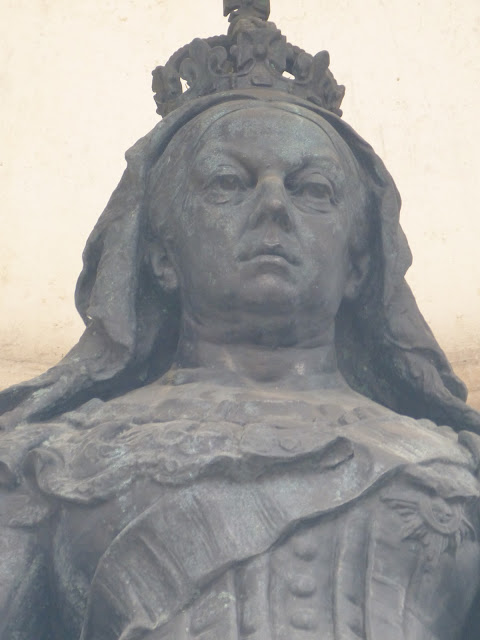 By portraying the Queen in her later years the sculpture has invited comments such as ‘unflattering’, ‘unsentimental’ yet ‘instantly recognisable’.

Perhaps what is most remarkable about the Queen Victoria monument is that it still exists. As the following photograph shows, the area surrounding Derby Square was flattened in the May Blitz of 1941 and yet the monument was completely unscathed.

May 1941. Derby Square showing Lord Street (left) and South Castle Street (centre). The photo below shows rebuilding underway in the early 1950s. The buses are turning from the top of Lord Street into Derby Square. 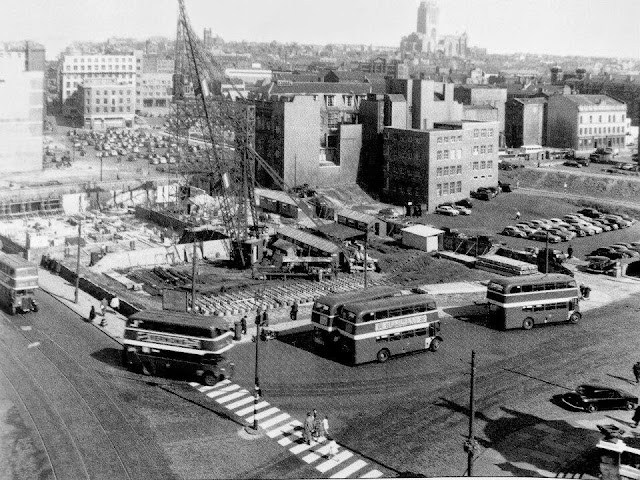 There are, of course, several Beatle related stories here, and the earliest involves Brian Epstein. As most will know, Brian was gay at a time when it was illegal in the UK and the search for love, or something more basic, always carried the risk of discovery by the police, the possibility of physical violence or being taken advantage of. On the evening of 19 May 1958 Brian encountered all three.

He had been cruising along the Strand in his car when he spotted a 23 year old man near the Royal Liver Building and stopped to pick him up. Brian drove to the comparative privacy of Sefton Park whereupon the man suddenly demanded £20 and beat him up when he refused. Taking what little money Brian had, the man told him to bring the £20 to the Queen Victoria monument the following day or he would expose him as a ‘queer’. After visiting the Royal Infirmary for treatment Epstein returned home to 197 Queens Drive where he had no choice but to tell his parents the whole sorry story. Following the inevitable tears and soul searching his parents agreed that Brian had no alternative but to report the attempted blackmail to the police.

The following morning Brian gave a statement and after questioning him over every detail the police provided him with an envelope full of dummy money and told him to meet the man at the monument as arranged while they lay in wait. When the envelope was seen to exchange hands the police revealed themselves, chasing the man through the streets until they caught and arrested him. The blackmailer was subsequently jailed for two years. To spare him any embarrassment Brian was referred to throughout the trial as Mr ‘X’. 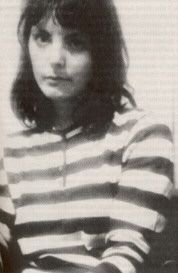 The first girl John Lennon allowed himself to be close to following the death of his mother Julia in July 1958 was Thelma Pickles, a new student who he met when he returned to Art College that Autumn: My first impression of John was that he was a smartarse. I was 16; a friend introduced us at Liverpool College of Art when we were waiting to register. There was a radio host at the time called Wilfred Pickles whose catchphrase was 'Give them the money, Mabel!'. When John heard my name he asked 'Any relation to Wilfred?', which I was sick of hearing. Then a girl breezed in and said, 'Hey John, I hear your mother's dead', and I felt absolutely sick. He didn't flinch, he simply replied, 'Yeah'. 'It was a policeman that knocked her down, wasn't it?' Again he didn't react, he just said, 'That's right, yeah.' His mother had been killed two months earlier. I was stunned by his detachment, and impressed that he was brave enough to not break down or show any emotion.

Their relationship blossomed one day when they sat together chatting on the steps of the Victoria monument. Thelma discovered they shared a common bond – the feeling of being deserted by their dad. John's admission that 'My dad pissed off when I was a baby' wasn't entirely accurate though it was probably what he had been brought up to believe.

Thelma: Mine had too. I wasn't a baby – I was ten. It had such a profound effect on me that I would never discuss it with anyone. Nowadays one–parent families are common but then it was something shameful. After that it was like we were two against the world.

Thelma was impressed by how remarkably impassive he remained when discussing the subject,  something she struggled to do, and even more so by the matter of fact way he dealt with questions from his fellow students about his recently deceased Mum. As they became closer Thelma realised,  Of course, it was all a front.

What brought John and Thelma to Derby Square? They might have come on an art class assignment or simply to catch a bus home but I like to think John brought her here during some free-time because he wanted to try and amuse (or shock) her by revealing one of Queen Victoria’s most unfortunate features. Whether by accident or design, from a certain angle the scroll the Queen holds in her right hand resembles a penis emerging from her stately robes. I always delight in pointing out ‘Vicky’s Willy’ to those not in the know, and I can imagine John doing the same. Perhaps I should grow up! 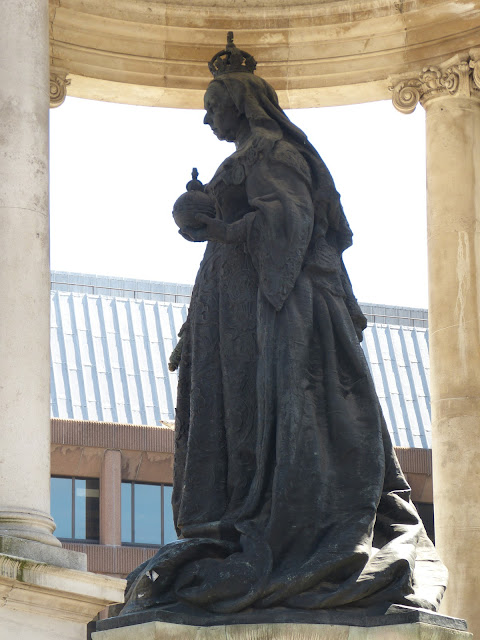 "We are not amused" 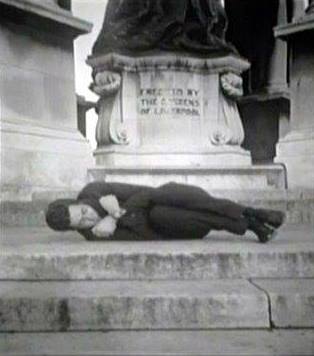 At some point in 1961 Paul McCartney was the first Beatle to be photographed here. Why these pictures exist and who took them is a bit of a mystery but there might be a clue in a third photograph which shows Paul at a different location but wearing the same clothes, this time accompanied by John Lennon and Bob Wooler. Of course there’s no guarantee this was taken on the same day as the two on the monument but it’s not a great stretch to imagine Paul was being encouraged by someone else to, well, act a bit weird. 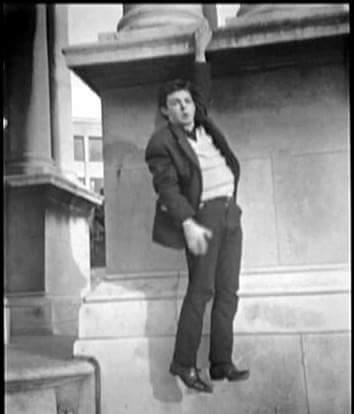 Paul McCartney on the monument, circa 1961 and with Bob Wooler and John (below) 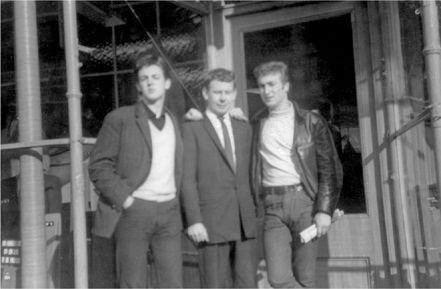 Some of the best known photographs of the Beatles in Liverpool were taken here two years later when the group were on the cusp of fame.

The date was Tuesday, February 19, 1963, eight days after the 13 hour studio session at EMI which saw them record ten numbers for their first album 'Please Please Me'.

They were photographed by Michael Ward for the pop magazine ‘Honey’ at several locations between the Pier Head and the Nems office on Whitechapel, including numerous shots taken on and around the monument.
Ward would later admit: I’d never heard of them, and they weren’t remotely interested in me. I met them in a pub and then we went around the town together. 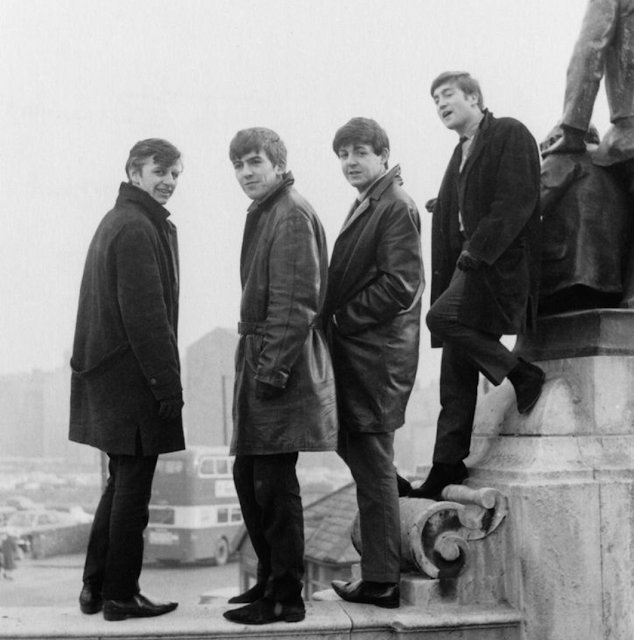 They were reasonably easy to photograph – although they were already a bit blasé about it. Paul was very helpful, but John Lennon would insist on ruining a picture. Of course, he thought it was extremely funny. John just wanted to get it over with. He’s chatting to the girls while the other three are looking straight at me. 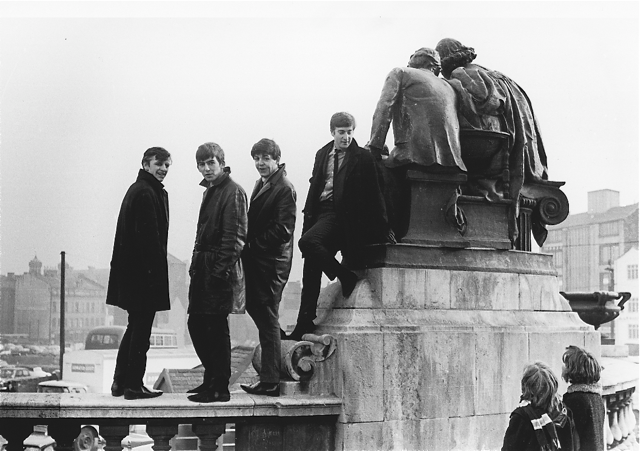 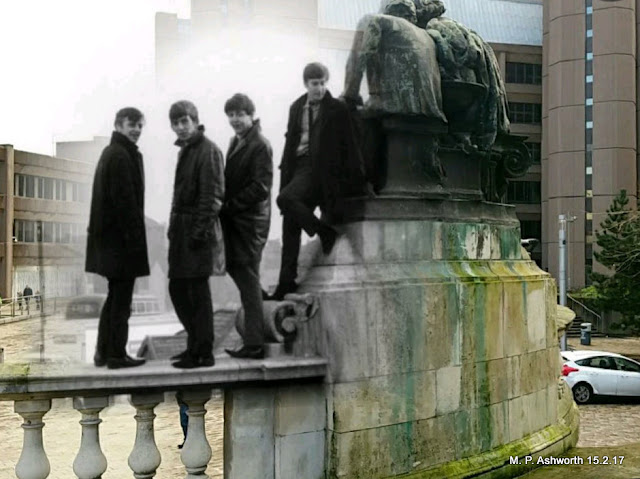 I was trying to make them laugh and look at the camera – or past the camera. It wasn’t easy because they were all chatting among themselves, and the fans had started to come along. 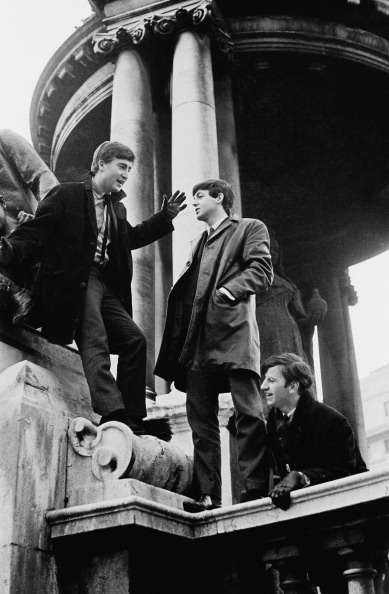 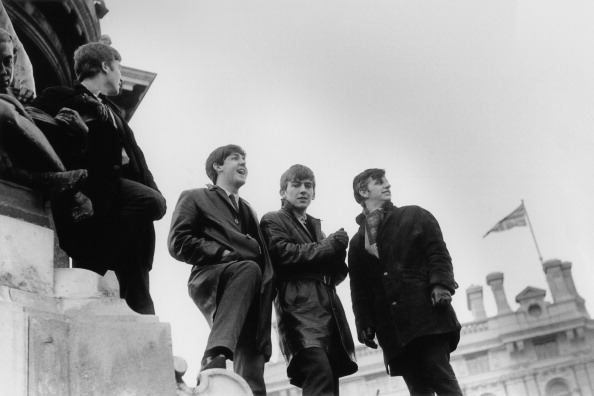 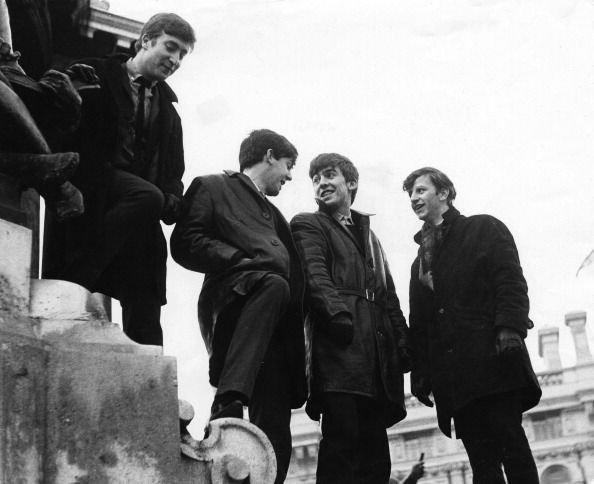 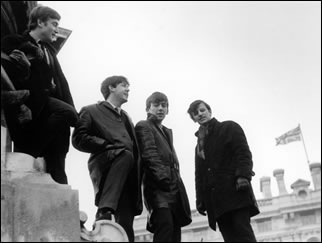 In early 1963 Liverpool, like the rest of Britain was two months into the coldest winter in 200 years, and both photographer and subjects shivered in sub-zero temperatures. By mid-afternoon, the Beatles had had enough. 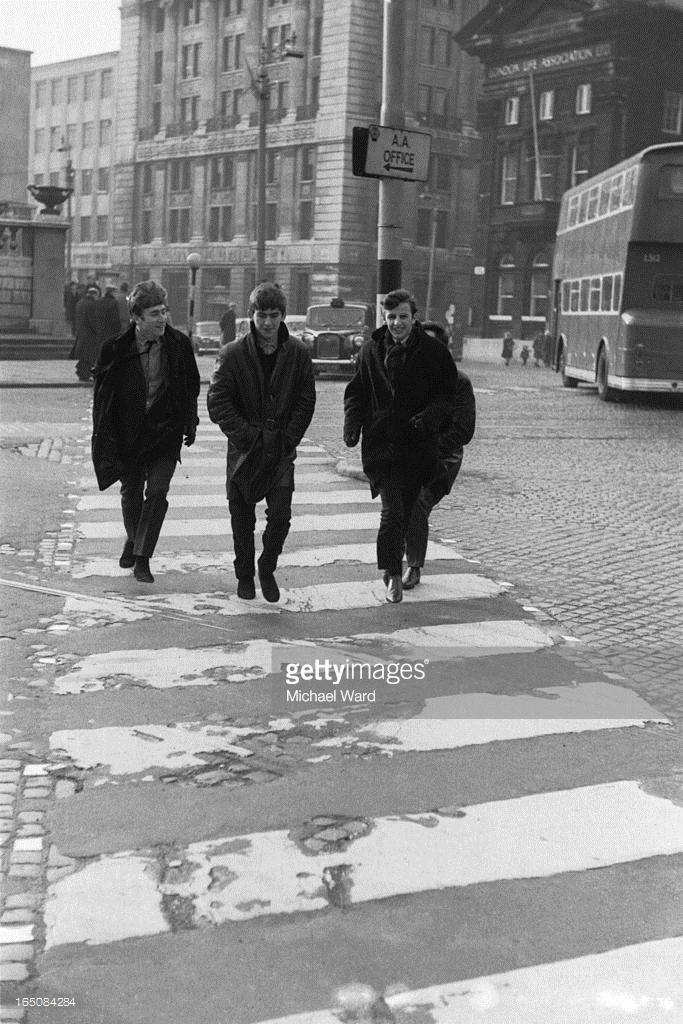 Paul McCartney is obscured behind Ringo Starr (above)


Ward wanted to re-shoot, but the band were tiring on account of the freezing weather, and refused to pose for further pictures outside. Ward remembers:

They got fed up, and the ﬁnal shot, on the zebra crossing, was ruined because Paul disappeared behind Ringo. They couldn’t be bothered to do it again, and nor could I.

It would not be the last time the group was photographed on a zebra crossing...

By chance Ward had arrived in Liverpool on the day when the Beatles' lives would change.

After taking photographs of the group in rehearsal at the Cavern and in Brian Epstein's office in Whitechapel, Ward returned to the Cavern to capture the Beatles' evening session.

Also on the bill that night were Lee Curtis and the All Stars, The Pathfinders, and Freddie Starr and the Midnighters. Watching the Beatles' set from the audience was Pete Best, their former drummer and at that time a member of the All Stars.

Reportedly it was the last time the Beatles set eyes on Best.

It must have been an emotional night for Pete. Before the Beatles took to the stage Bob Wooler read out a telegram from Brian Epstein announcing that 'Please Please Me' had just made it to number one in the coming Friday’s NME chart. The news was met with mixed reactions from the audience, some of whom went quiet. They sensed that The Beatles were no longer their secret and to a large extent they were right.The Beatles only played the Cavern on two further occasions before fame took them elsewhere.
The Beatles went to bed that night as pop-stars. 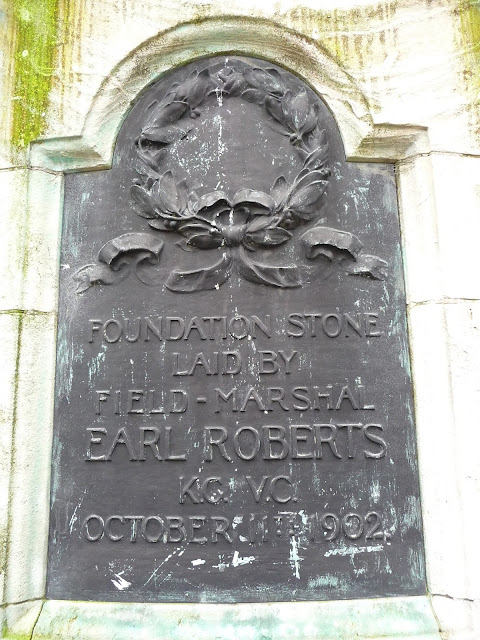 Details from the Queen Victoria Monument 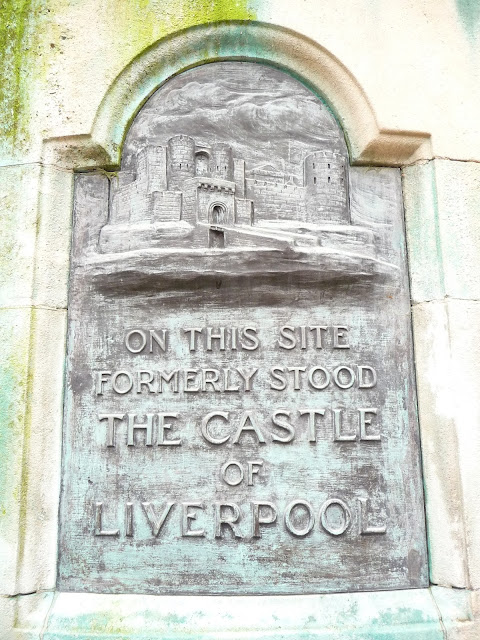 The title of this blog comes from a passage in John Lennon's book 'In His Own Write', and is a pun on the 'We Are Not Amused" phrase, commonly attributed to Queen Victoria.

'Tune In' by Mark Lewisohn.