On 10 May 1960 the Silver Beetles / Beatles auditioned for Larry Parnes at the Wyvern Social Club, a venue Allan Williams had recently bought and would re-open and re-name the Blue Angel. 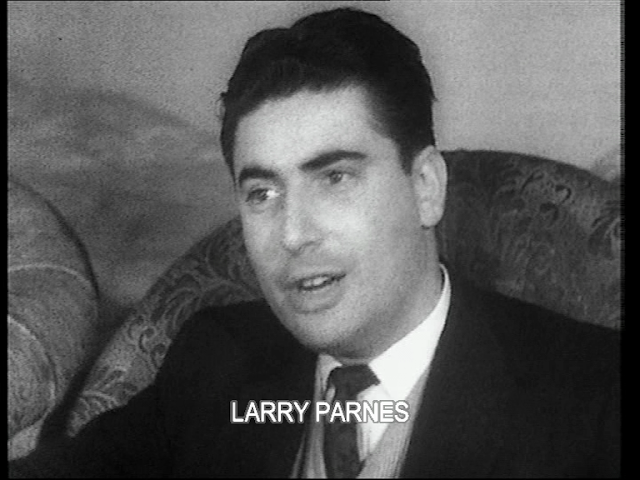 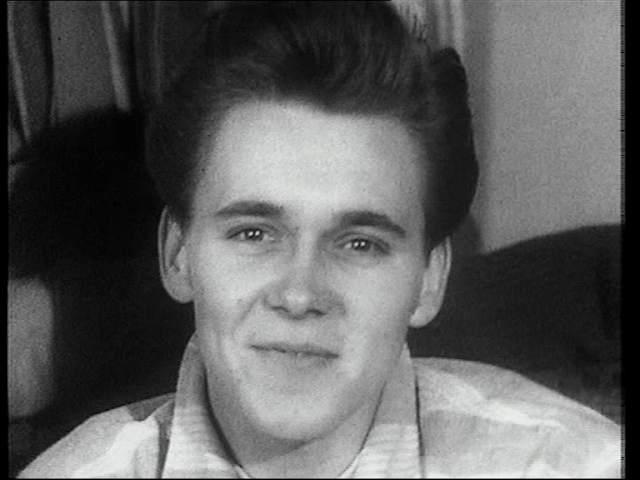 In May, Larry Parnes came to town, auditioning. He was the big London agent. His acts nearly always had a violent surname. There was Ronnie Wycherley who became Billy Fury; and a less furious guy you have yet to meet. A sweet Liverpool guy – the first local man who made it, in our eyes. Marty Wilde was also in Larry's stable; he had another tempestuous surname. But Larry Parnes had some new singers and was looking for backing groups, and someone had told him there were a few groups around in Liverpool. So he came up to the Blue Angel. Billy Fury came with him. (Paul McCartney, Anthology)

Cheniston K. Roland worked as a photographer at the Jacaranda, Allan's other venue. Luckily for us he was at the Wyvern that day and managed to take several memorable frames as the audition got under way. 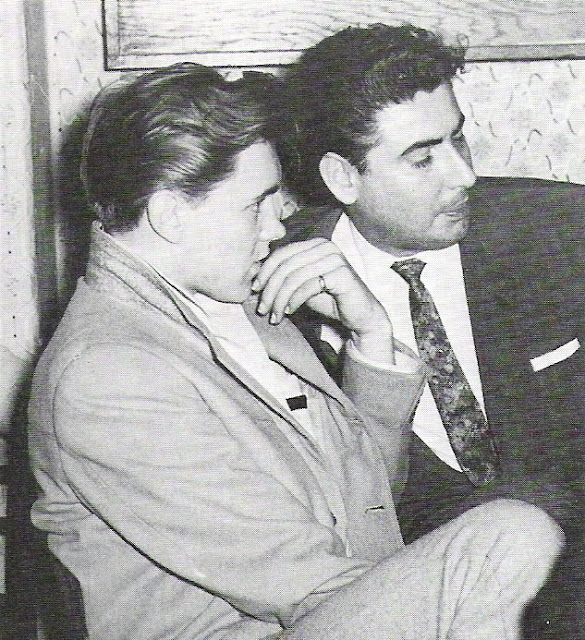 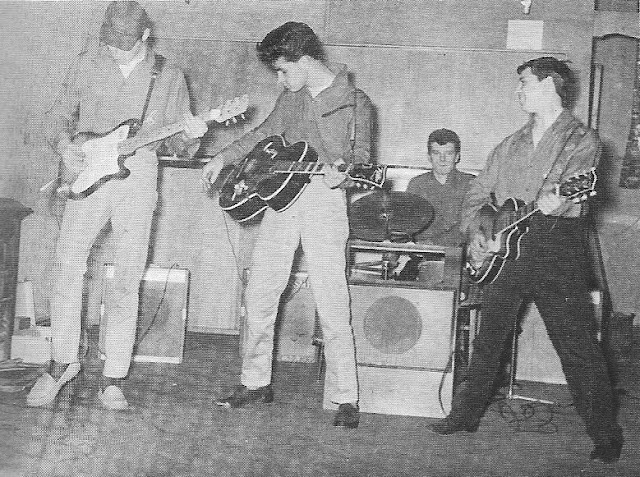 The first group to audition were Cass and the Cassanovas with Johnny 'Hutch' Hutchinson on drums. 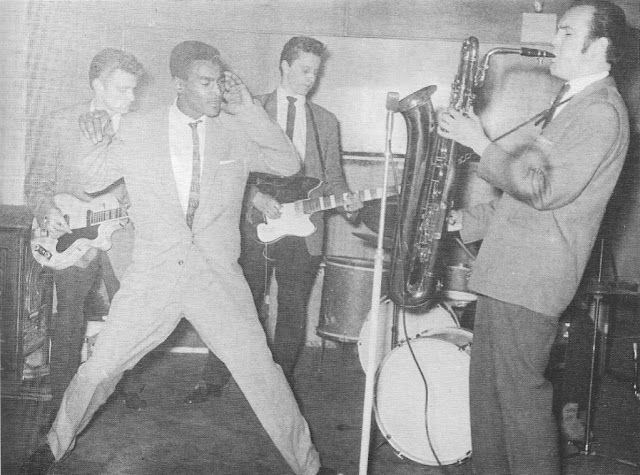 Derry and the Seniors were up next, with Howie Casey on sax. Casey would later play with Paul McCartney's Wings 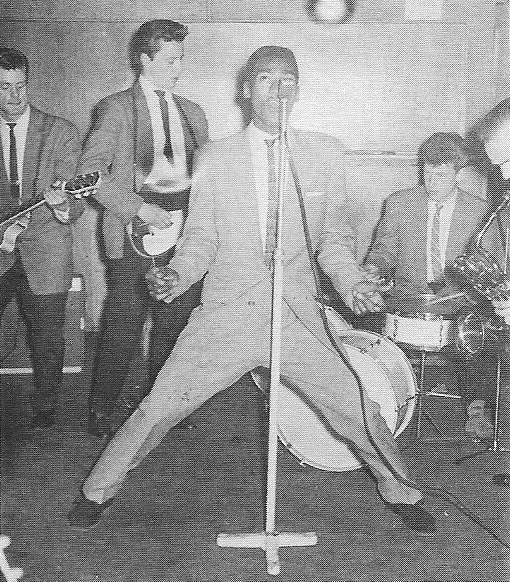 Derry Wilkie in action at the Wyvern. 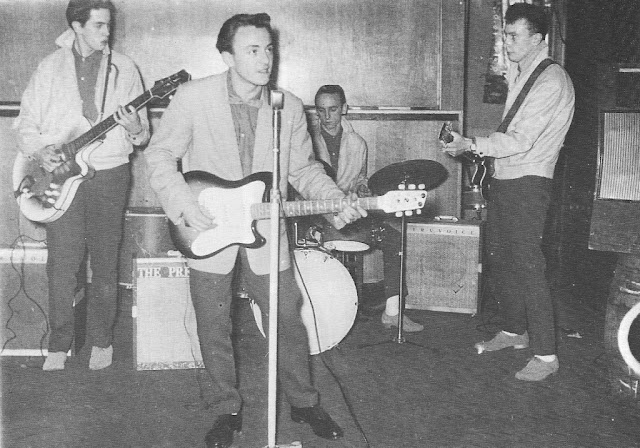 Gerry and the Pacemakers were the third group to audition for Larry Parnes. 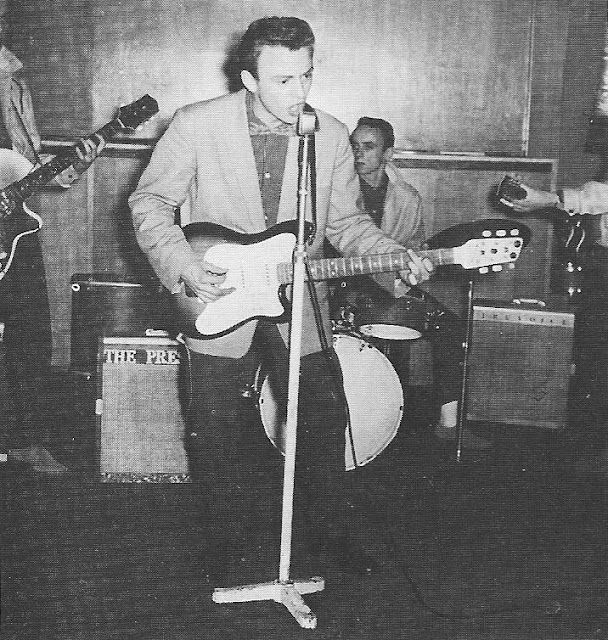 Reportedly Parnes and Fury watched the groups with little enthusiasm. 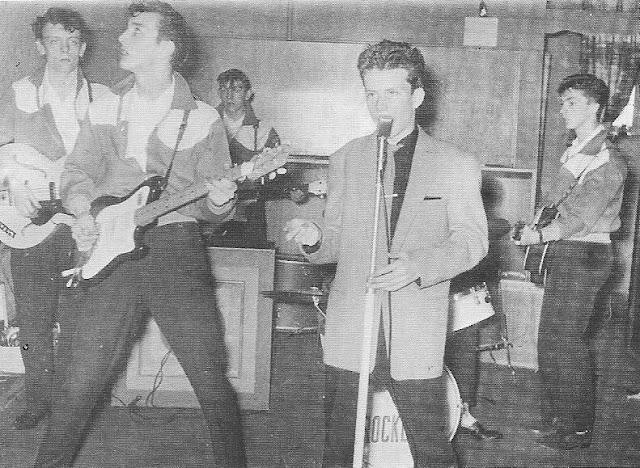 Up fourth were Cliff Roberts and the Rockers. 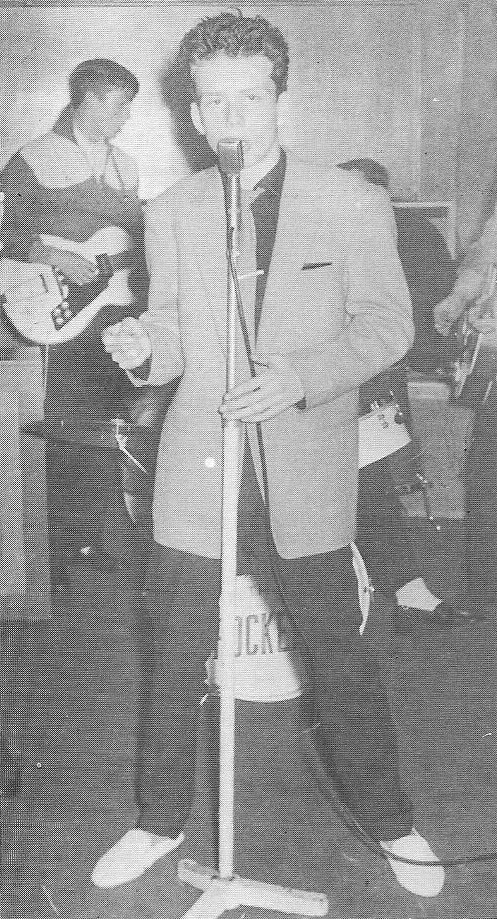 And then, finally, it was the turn of the Silver Beatles.

The only problem was that their drummer, Tommy Moore had still not turned up. According to Allan Williams he managed to persuade Johnny Hutch, drummer for Cass and the Cassanovas to sit in. Hutch was reluctant, he considered the Silver Beatles a bunch of posers but either as a favour to Williams, or simply out of the goodness of his heart he finally agreed, much to the Silver Beatles relief. They thought they were about to blow their big chance without playing a single note. 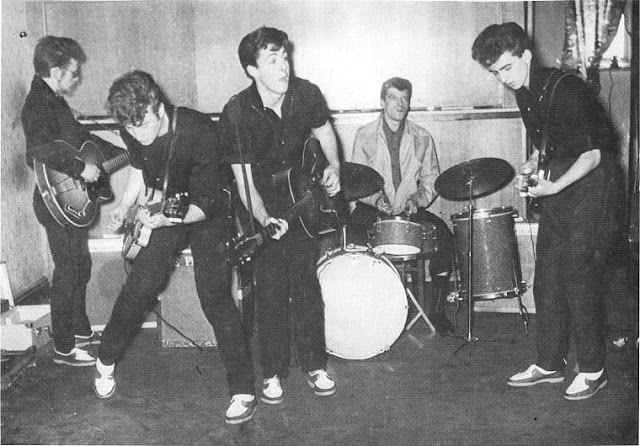 The Silver Beatles with Johnny Hutchinson on drums.

After a couple of songs Tommy Moore arrived and took his place behind the drums. 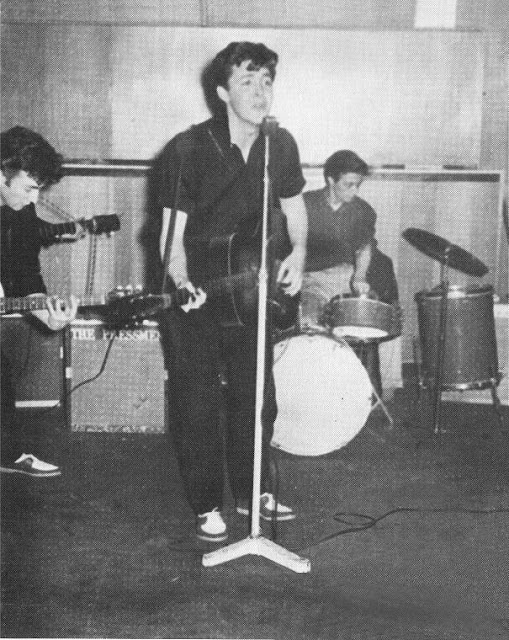 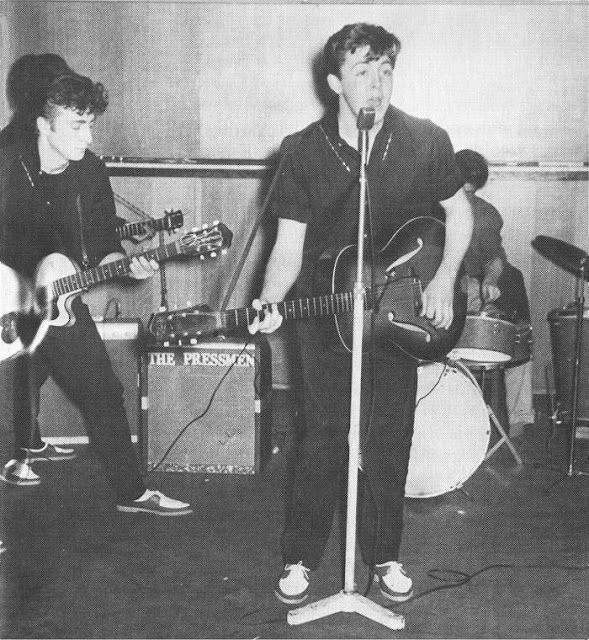 Beforehand we went out and bought some string shoes with little white bits on top. We were very poor and never had any matching clothes, but we tried to put together a uniform – black shirts and these shoes. (George Harrison, Anthology) 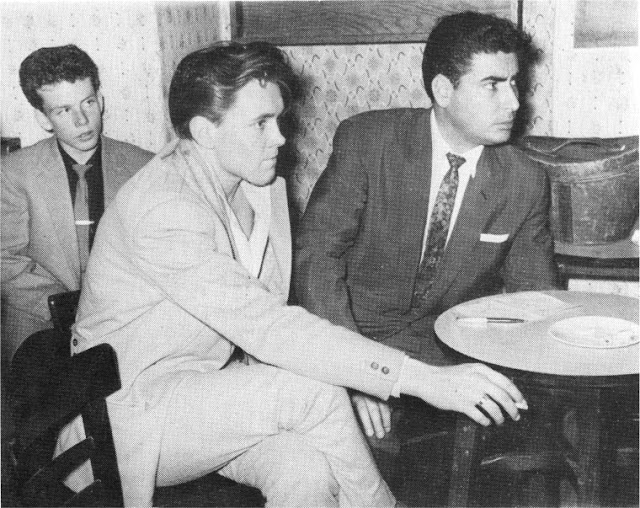 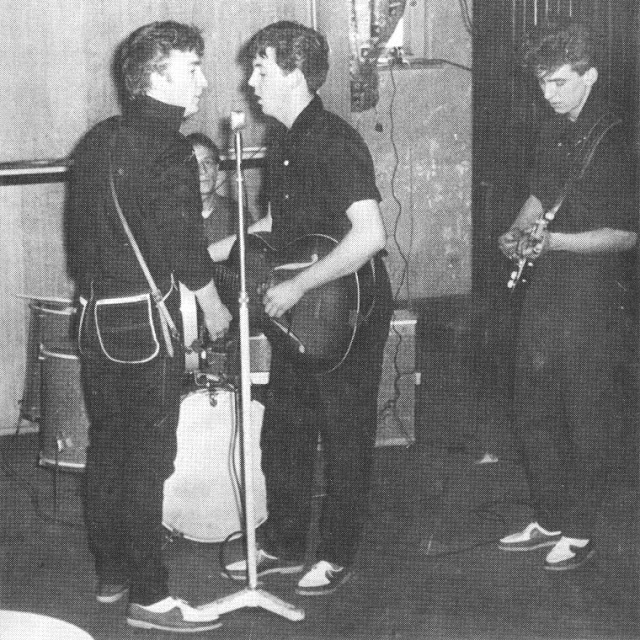 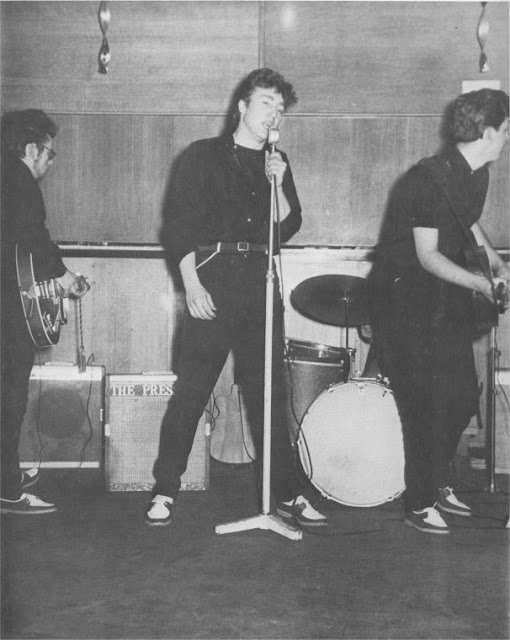 For one number John sang without his guitar. 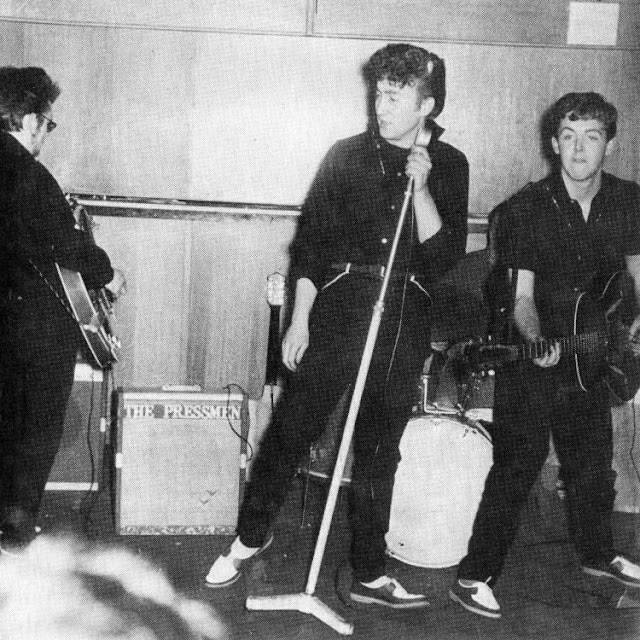 A story has spread through the years that Parnes was unhappy with the limited abilities of their newly-recruited bass player, Stuart Sutcliffe, noticing how he tried to disguise this by playing with his back to the audience. 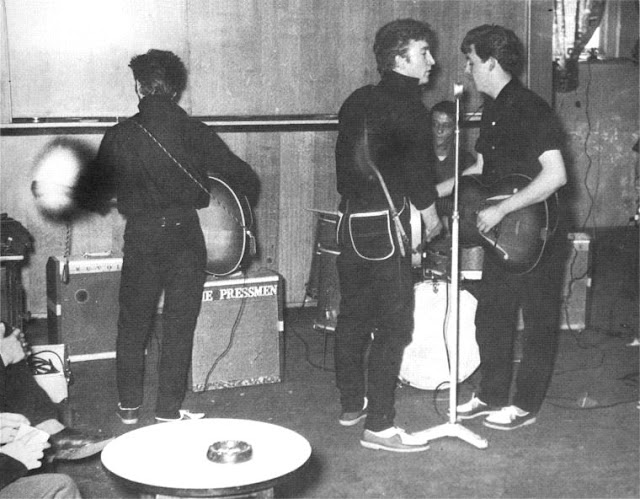 Photographs from this day do give some weight to this but similarly he may just have been tuning his bass at the moment the photo was taken.

The story probably originated in 'The Man Who Gave The Beatles Away', Allan Williams' hilarious but historically dubious tale of his time with the Fabs.
According to Williams the Silver Beetles impressed Fury (who they'd met previously - he was the cousin of Arthur Kelly, George Harrison's best mate) and he was keen to use them. But Parnes threw water on the fire when he asked Williams if the group 'could play something without the bass player'.

Parnes had spotted the one big flaw in the Beatles. Their powerful gutsy music couldn't cover up the fact that Stuart couldn't play a note. In fact, he rarely tried. He merely let his hands wander over what he believed were roughly the right notes. He was not a musician and would never be one.
(The Man Who Gave The Beatles Away)

The Silver Beatles refused, Lennon reportedly telling Williams / Parnes that We're a group, all or none. That's the way it is.

When asked about it later, Larry Parnes denied Williams' claim, stating only that he was slightly concerned about the late arrival of Tommy Moore.

Whether it first occurred in Allan's book or elsewhere is open to conjecture but the fact is the story stuck and was picked up as fact and repeated in other books, including the Beatles' own Anthology:

We had to tell Stuart to turn the other way: 'Do a moody – do a big Elvis pose.' If anyone had been taking notice they would have seen that when we were all in A, Stu would be in another key. But he soon caught up. (Paul McCartney,Anthology) 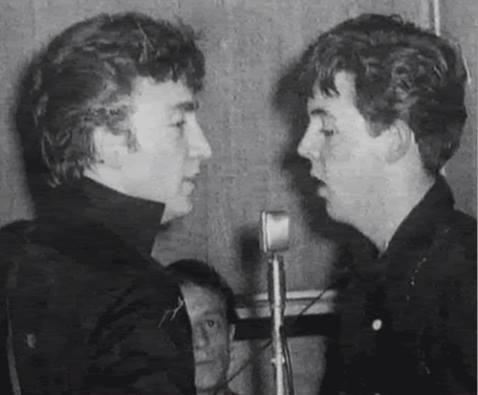 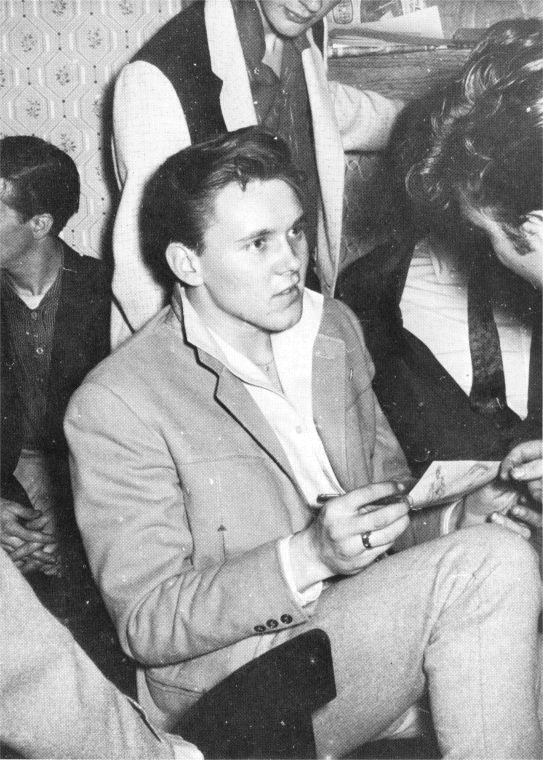 During the break John Lennon (extreme top right) approached Fury with a slip of paper and asked for his autograph. Note Tommy Moore on the extreme left.

Rory Storm was also present. He wasn't there to audition, he just wanted his photo taken with Billy. 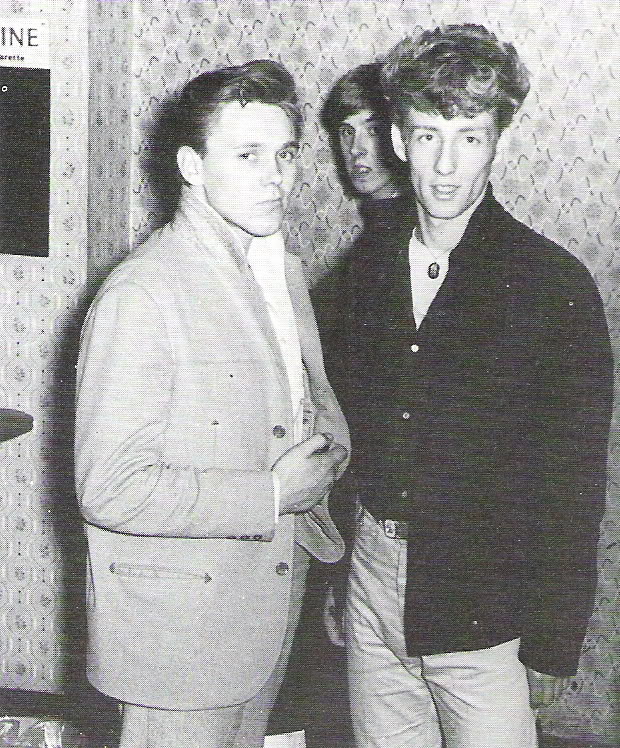 Apparently Rory intended to plaster Liverpool with resultant image. Parnes was furious and threatened never to audition another Liverpool artist if the photo was printed. 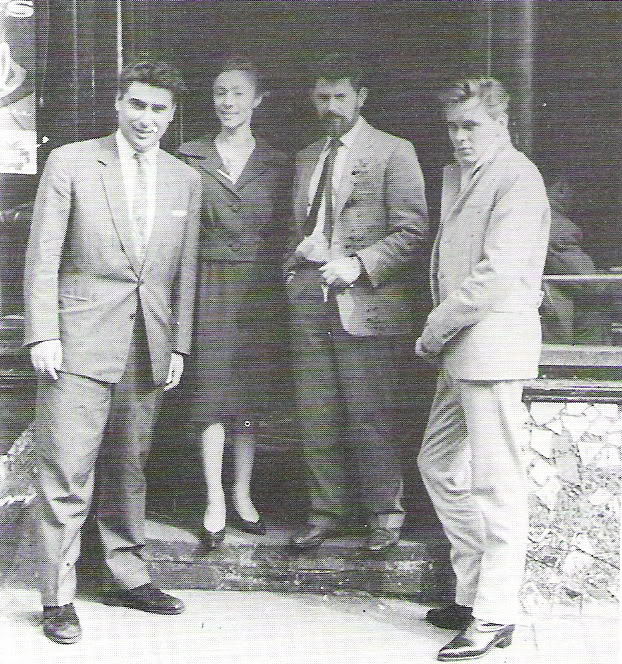 Roland's final photograph that day was this one, taken outside the Jacaranda where Williams took them after the audition. Left to right: Larry Parnes, Beryl Williams, Allan Williams and Billy Fury.

As for the Beatles, the outcome of the audition is well known: We passed that audition to go on tour – not with a furious name at all like the other acts, but with a guy called Johnny Gentle. (Paul McCartney) 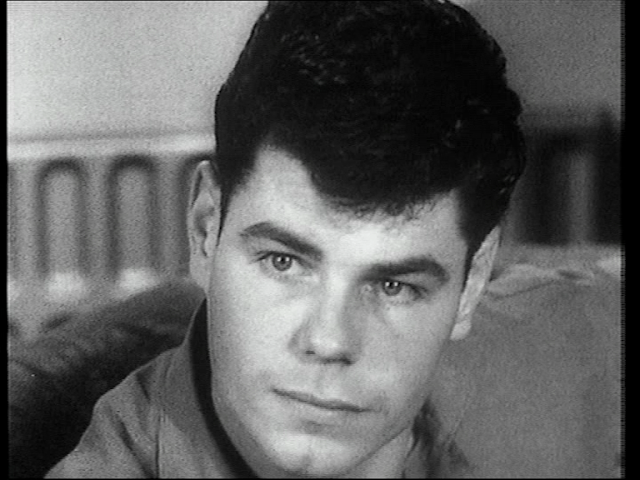 On 18 May, Parnes offered the Silver Beetles a tour, not as Fury's backing band but as the support for one of his lesser artistes, a fellow Liverpudlian called Johnny Gentle. 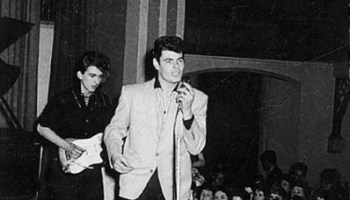 The nine day tour of Scotland commenced in Alloa, Clackmannanshire on 20 May.

How They Became The Beatles -  by Gareth L. Pawlowski, one of the finest books ever written about the Beatles' early years.

Published in 1990 and now out of print, the book was the first to showcase the photographs taken this day by Cheniston K. Roland and I assume at some point the book was scanned and the images made freely available on line. They are, and remain the property of Cheniston K. Roland and if anybody knows how to contact him please let me know as I would seek his permission to use them here. Thanks
at May 11, 2018