In order to put the mystery of the new George photograph to rest, Thorsten Knublauch has gone to the trouble of locating and then purchasing a copy of the Christie's auction catalogue from 1996 where the photo first appeared. The vendor has advanced copies of the pages we're really interested in (25-26) and they are reproduced by kind permission here. 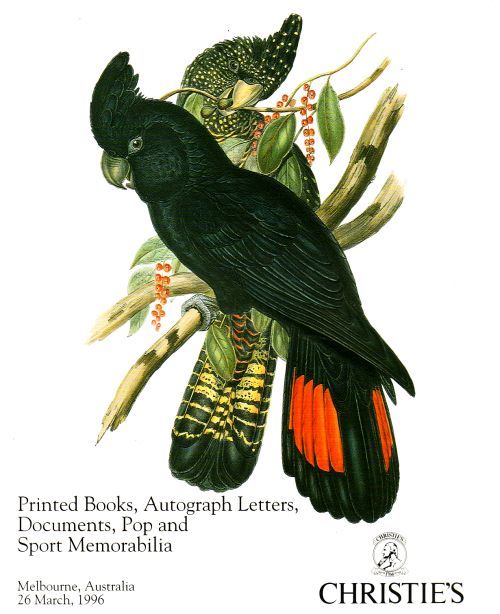 From the ebay listing:

Sport and Pop Memorabilia including: an album of early photographs of George Harrison and the Beatles, 1961-63; a unique tape recording of the Beatles press conference in Toronto, 1966 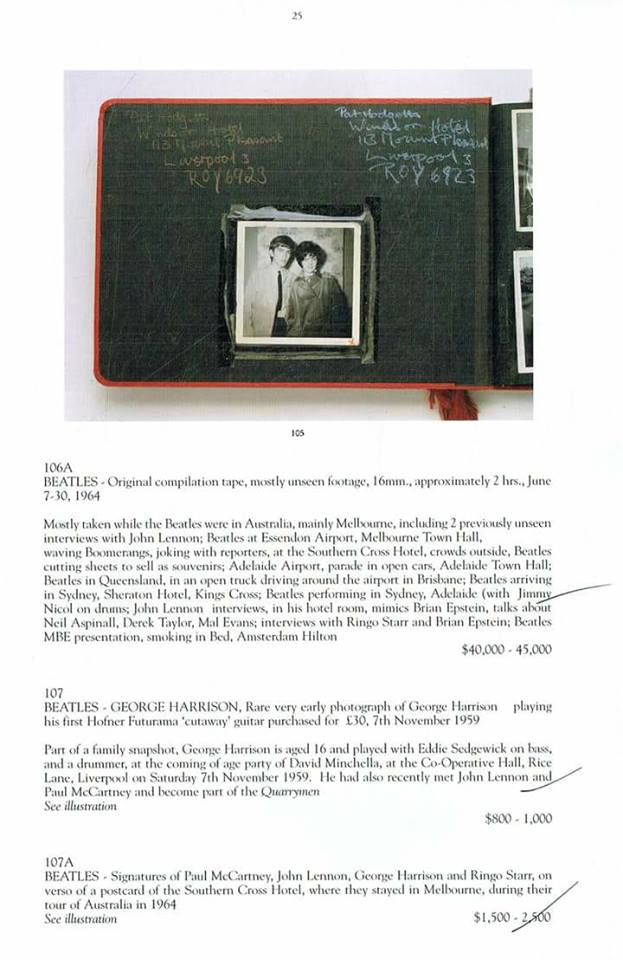 This is page 25 which provides a detailed listing of the photo we are all concerned with, Lot 107.  Note there's another previously unseen photograph of George and a fan in Lot 105, part of an album of fan snaps taken during the June 1964 tour of Australia.

Part of a family snapshot, George Harrison is aged 16 and played with Eddie Sedgewick on bass and a drummer, at the coming of age party of David Minchella, at the Co-Operative Hall, Rice Lane, Liverpool on Sunday 7th November 1959. He had also recently met John Lennon and Paul McCartney and become part of the Quarrymen.

According to Beatles Tour Guide Jackie Spencer the name Minchella (or Mingella) was quite common around the Rice Lane area where she grew up. Mark Lewisohn has provided Thorsten with the extract below confirming a David A. Minchella was 21 in November 1959. Where is he now? Who is Eddie Sedgewick?

I'd love to trace the lady on the photo. I thought I had last night but according to her daughter she's not the one. She's the subject of the photo, with presumably her daughter but the fact George is in frame is I suspect intentional. There are all manner of photos on the web now of people eating in restaurants which 'just happen' to capture the real Paul McCartney or (insert celebrity name) eating at the next table.
Not that George was famous in 1959. The woman probably just told the photographer to 'try and get that guitar player in the photo too. I've never seen anything like it. His hair looks just like a f-king turban' 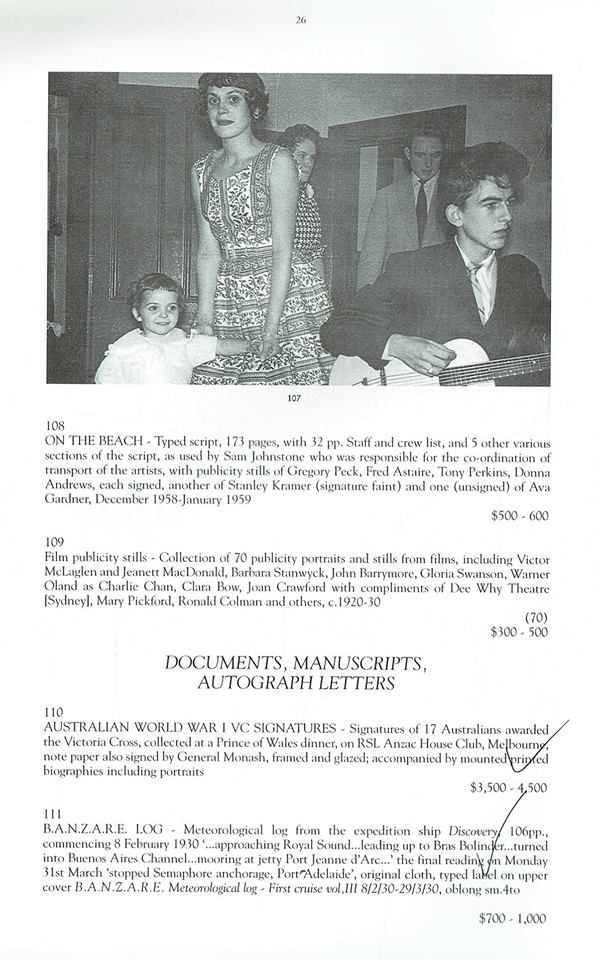 Greg Armstrong, the man on Facebook I mentioned in my earlier post who claimed to have knowledge about the photo probably had access to this catalogue because now we too have a location for the photograph, a reason for its existence and with it the actual date it was taken. Despite the auctioneers misnaming the guitar the rest of this information is gold-dust. If nothing else I've got another place to go and photograph. 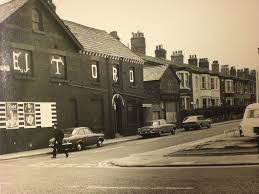 The Co-Operative Hall on the corner of Rice Lane and Yew Tree Road is still there today. In the 1970s and beyond it was a club known as the 'El Toro', a place one wit remembers was 'a sticky-carpeted, one fire-escaped death trap with a healthy undercurrent of potential violence. Probably why the wife spent most of her Friday nights there'. 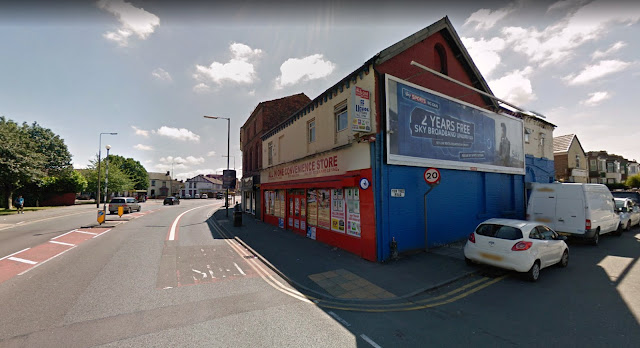 The date of David Minchella's 21st party, Sunday 7 November 1959 came at the end of George's first week working as an electrician at Blacklers, the well loved department store on Great Charlotte Street in Liverpool city centre.

George started on £3 10s a week and as soon as he received his first wage packet on 20 November he went over to Hessys' on Whitechapel to put a deposit down on a new guitar. He chose a Czechoslovakian made Delicia Futurama, probably because of its similar appearance to what he really wanted but couldn't have, a Fender Stratocaster.  His Hofner Club 40 seems to have been immediately retired. He unveiled the Futurama at the Casbah club the following evening to the amazement of John and Paul.

During the summer of 1959 George had been a member of both the (largely inactive) Quarrymen and the Les Stewart Quartet. It was a time he once referred to intriguingly as his 'free-lancing period' when he sat in with various unremembered groups. This appears to be one of those nights.

Which brings us back to the photo of George. Not only is it the only clear picture we have of him playing the Club Footy, it's likely to have been the last one ever taken of him with it.

But just when we think we have evidential proof that the photograph is what it purports to be, there's another alleged problem. It's been suggested that the Hofner Club 40 in the photo doesn't match the one Mary Dostal is selling at auction.

Apparently the one George is playing has a piece of wood under the neck at the point where it joins the body, as I've indicated on the photo below. 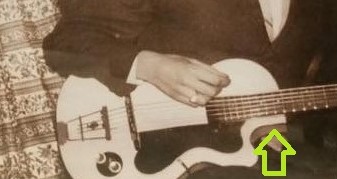 Whereas the one being sold at auction, does not as seen in the photo below: 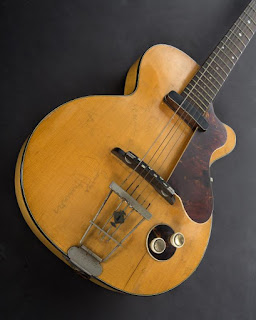 Which leads to two intriguing possibilities. One, that the Club 40 George is pictured with isn't his. Perhaps he's just sitting in with the band playing at the 21st birthday party and the guitarist happened to have the same guitar as George. As Tony Bramwell told me, everyone had the Selmer catalogue and I suspect the Club 40 was a popular choice.

Two, that the guitar George is playing is his, but the signed one he gave away as a competition prize at the end of 1965 was not. It was just a random Club 40. I wondered in my earlier post how Brian Epstein had persuaded George to part with his first ever electric guitar given it must have held sentimental value. Perhaps, he didn't.......

In reality I don't think there is any mystery. It's all to do with the angle the photo is taken from. In the nick of time, Julien's auction house has released a promotional video ahead of the sale of the guitar which has enabled me to take a number of stills of the instrument from different angles. Note how that piece of wood looks much more prominent depending on where you view it from. 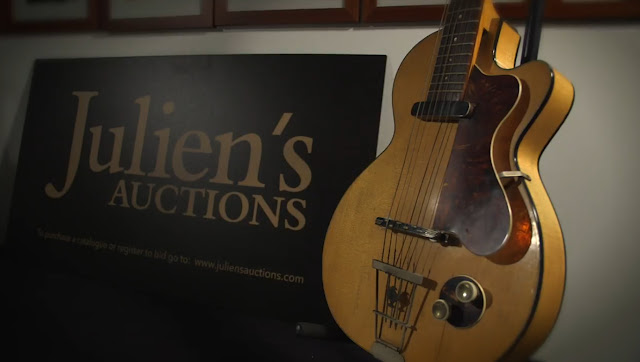 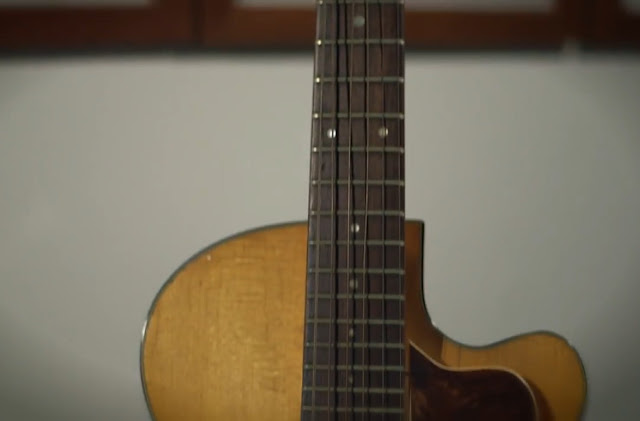 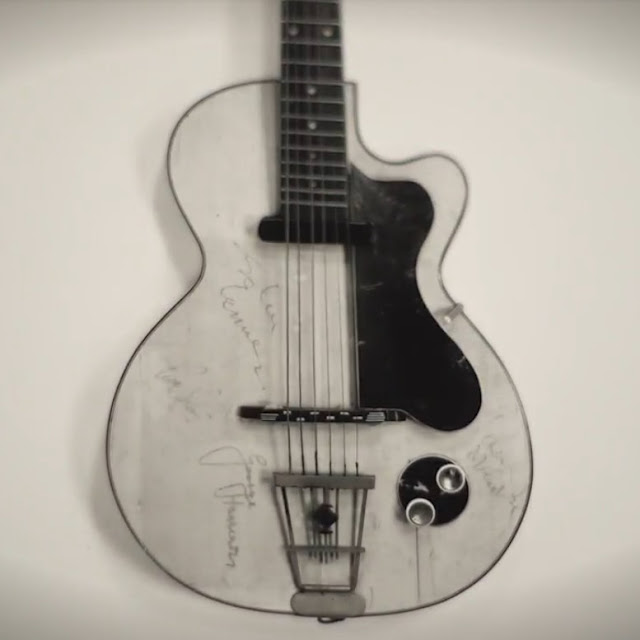 It's ironic that what started this off - the upcoming auction of the guitar and what now seems to be the completely co-incidental emergence of the photo of George - is almost an irrelevance now. I'm pleased it's a new photo but at this point George could be playing the spoons in it for all it matters.

Someone once said that there is immense power when people with similar interests get together to work towards the same goal. If only that had been the case here. The delight we should have shared from seeing this 'new' photo has been tarnished by the lengths some otherwise respected fans and scholars have gone to prove it a fake - initially basing their 'evidence' on a photo of the photo taken through glass - and their continued attempts to hold on to their false belief (and save face) even after being presented with proof that the photo was genuinely sold in a Christie's catalogue in 1996 (One even suggested the catalogue was a fake!)

I have no objection to a difference of opinion but what saddens me about this whole episode is how some have demeaned themselves by trolling those who don't share their view.

As George himself once sang

Thanks to Thorsten for the catalogue scans.

You can watch the Julien's video about the Club 40 auction here: