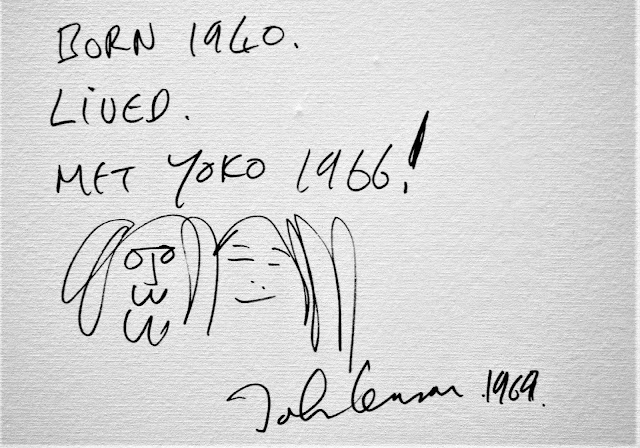 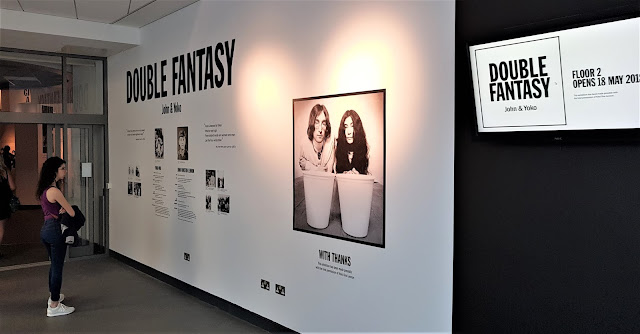 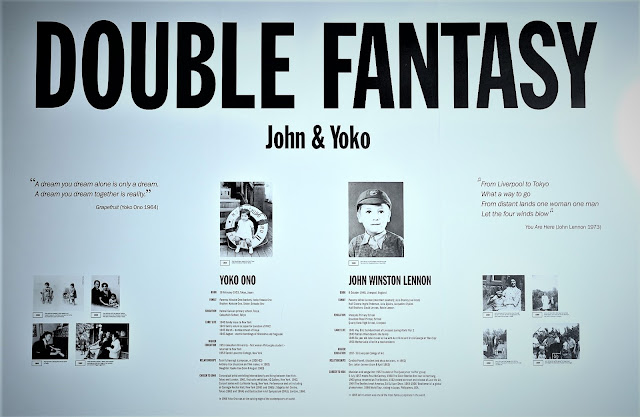 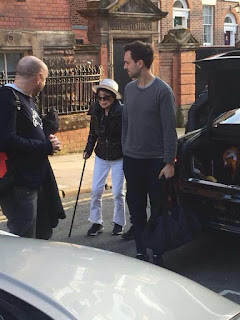 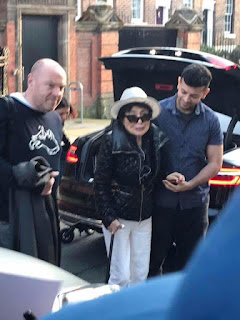 Yoko and Sean stayed at the Hope Street Hotel during their visit to Liverpool in May 2018. (Yoko pictured arriving at the Hotel). 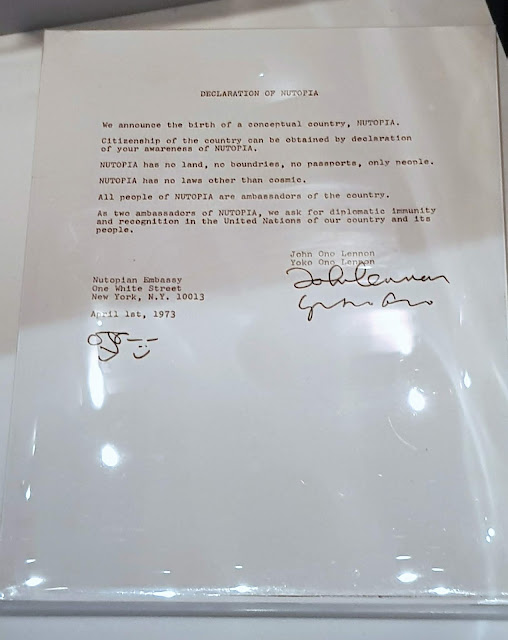 On 1 April 1973 John and Yoko signed their declaration of Nutopia, announcing the formation of their conceptual new country at a press conference in New York the following day. By Spring 1973 John's immigration problems had deepened and on March 23rd John was ordered to leave the country within 60 days. It seems that as ambassadors for Nutopia the Lennons thought they would be given diplomatic immunity, thereby avoid John's deportation order.  Surprisingly, it didn't work.

The declaration was issued from the Nutopian Embassy which was based at One White Street, New York, NY, 10013.

John and Yoko separated in October 1973. John moved to LA with his new girlfriend and personal assistant, May Pang.

Another highlight of the exhibition is John's New York City t-shirt, perhaps the most famous item of clothing associated with him during the 'solo' years. It was a gift from photographer Bob Gruen who took the iconic shots of John wearing it against a backdrop of the New York skyline in August 1974. 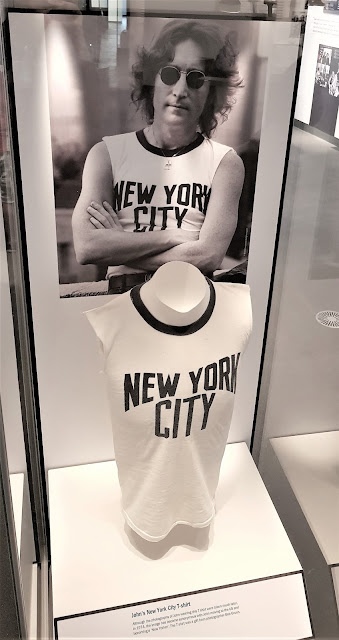 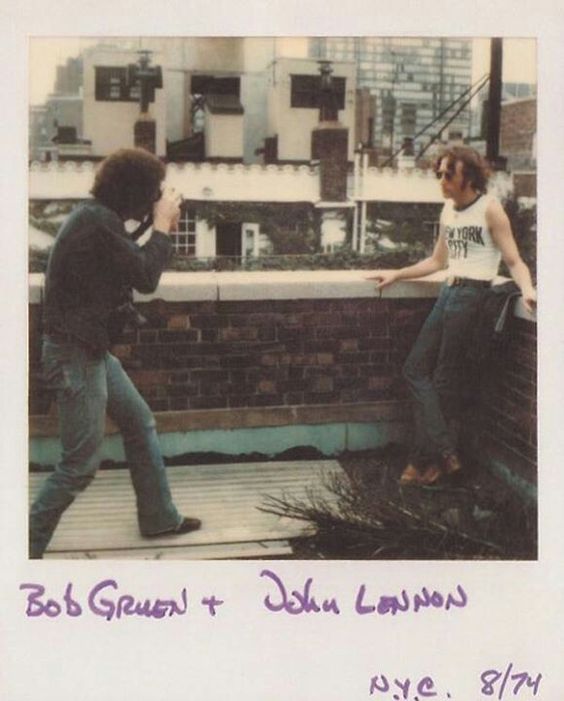 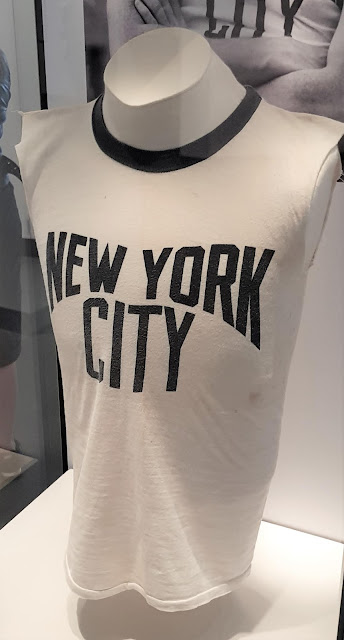 The photos were taken at the end of the sessions for John's latest album 'Walls and Bridges' which was released in September 1974. John and Ringo appeared on television and radio spots promoting the album (and Ringo's Goodnight Vienna). Humorously John even re-used a typed interview promoting the 1973 "Ringo" album with suitable amendments to promote his new album! 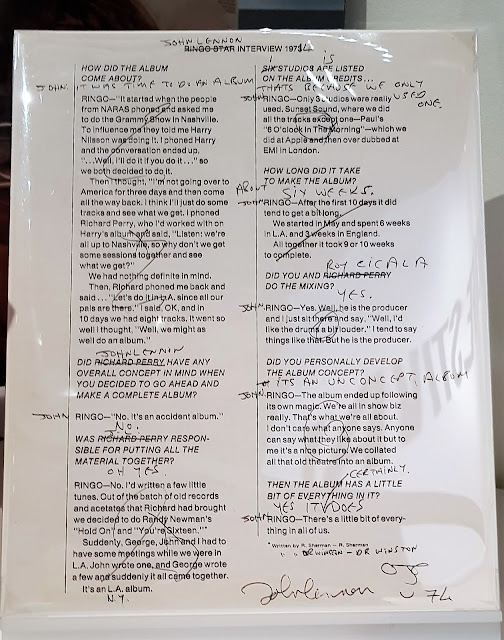 The lyrics to 'Whatever Gets You Through The Night',
the number one single and a highlight of the
'Walls and Bridges' album. 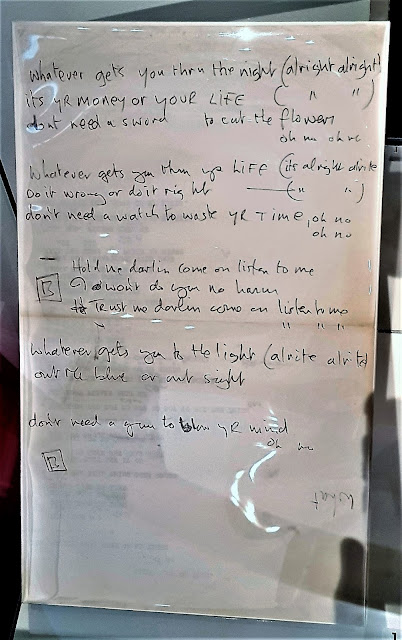 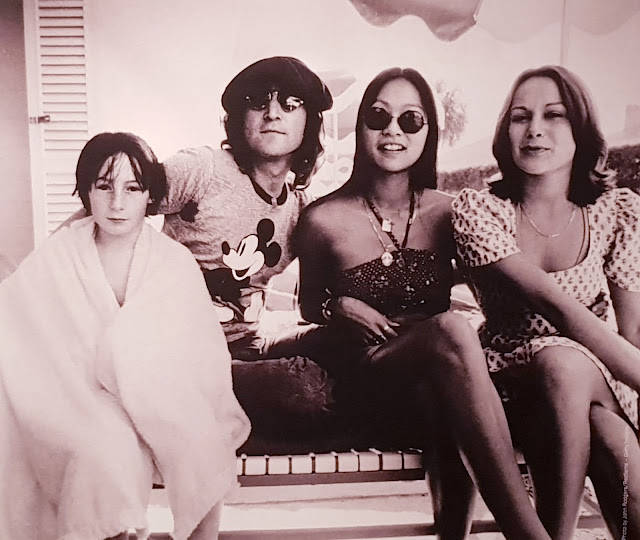 John ended 1974 holidaying with his son Julian and May Pang at Disney World in Florida. This photo was taken on 28 December 1974, at the Polynesian Village Hotel, Disney World, Florida. The following day John signed the paperwork to disband The Beatles.

John reunited with Yoko in January 1975 and by April she was pregnant. On October 7th John's deportation order was reversed and two days later,  on John's 35th birthday, Yoko gave birth to their son, Sean Ono Taro Lennon.

“The courts will not condone selective deportation based upon secret political grounds,” wrote Judge Irving Kaufman at the time. “Lennon’s four-year battle to remain in our country is testimony to his faith in this American dream.”

On July 27, 1976 John finally got his green card. It would allow him to come and go from the U.S. as he pleased. For the first few years he concentrated on bringing up Sean.  John and Yoko remained out of the public eye until 1980. 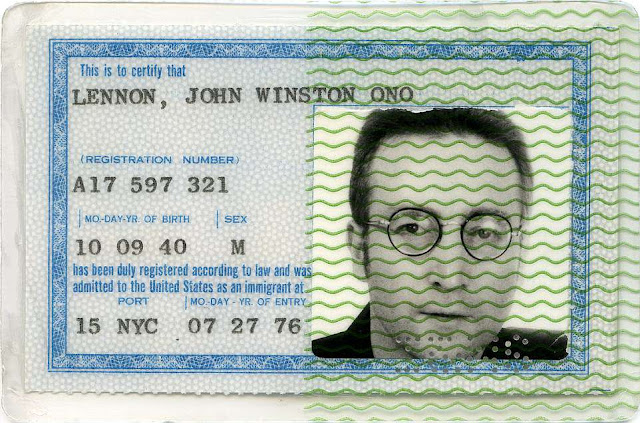 Double Fantasy - John and Yoko includes a few of John's guitars such as the enormous acoustic guitar used in an earlier art exhibition, and the ridiculous, but rare Sardonyx 800 DII guitar he used in the studio during the August 1980 sessions for the Double Fantasy and Milk and Honey albums. 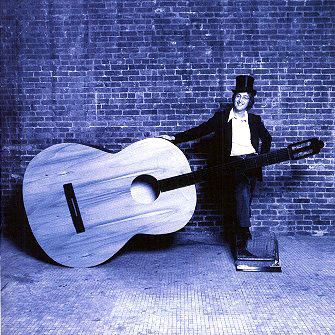 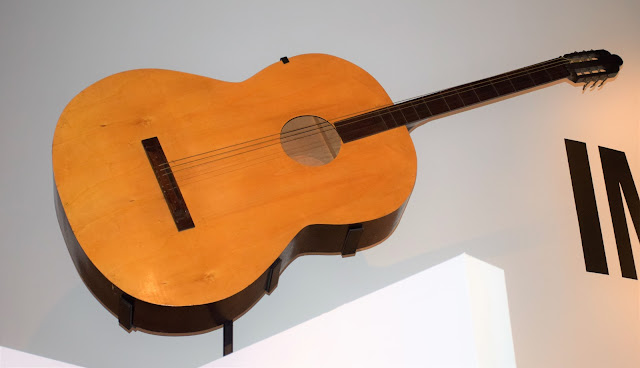 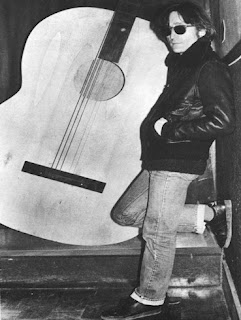 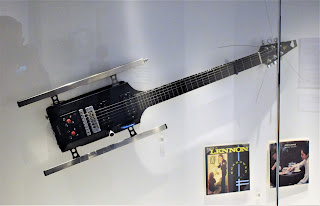 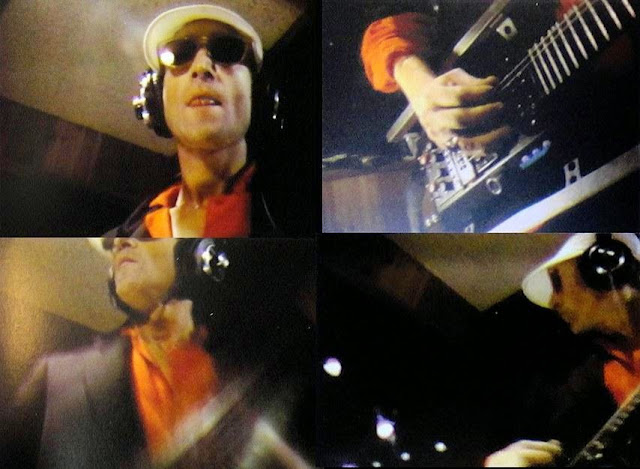 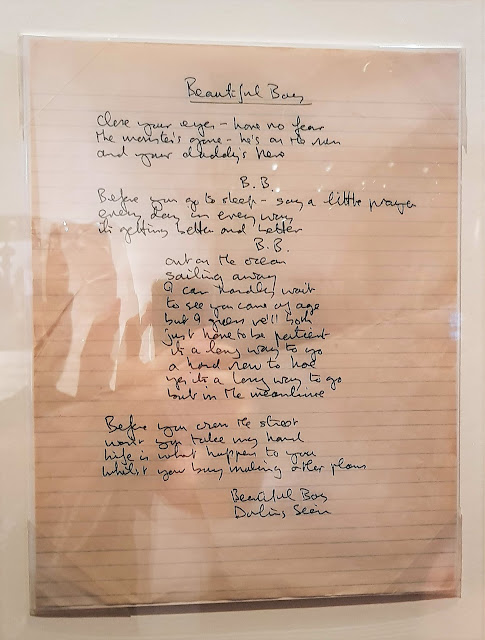 The lyric sheets for Beautiful Boy and Watching The Wheels. 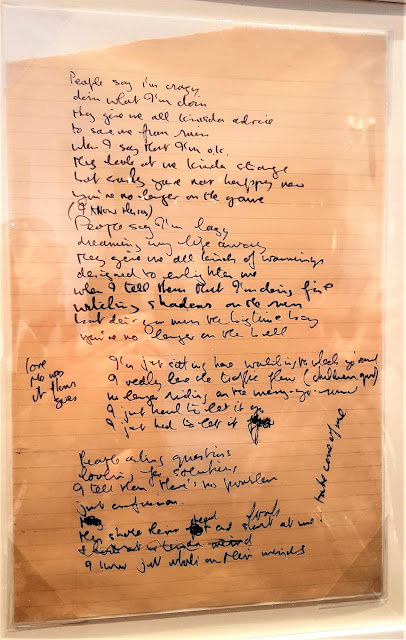 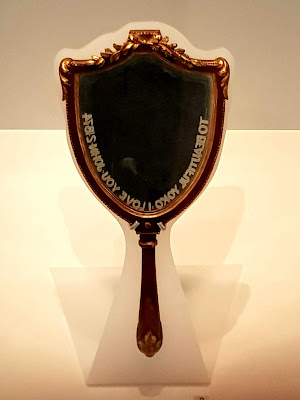 From John's final year we have this haunting portrait of John and Sean, painted during their 1980 holiday in Bermuda, John's lyrics to 'Woman' or as he wrote it 'Wo/man' and an engraved mirror, a present from John to Yoko.

A Central Park stroll, 1980.  The final photograph in the exhibition.

An interactive area of the exhibition is the Remember Love wall. Visitors are encouraged to leave a message on a post it note. As the museum website comments:

In busy 21st century life a reminder to ‘remember love’ appears to really strikes a chord with visitors. Some remember John Lennon and share what he and his music meant to them. Other visitors have shared the names of loved-ones in their life and there are many more poignant notes to those remembered with love who have passed away.

20,000 people have visited the exhibition since it opened two weeks ago. I hope my photographs help illustrate why I think that It's well worth a visit (and hopefully without being too much of a spoiler).

I think visitors will come away with a better understanding of John and Yoko's relationship and hopefully a realisation that there was a lot of humour behind their more outlandish projects which many people may previously have dismissed.

Double Fantasy - John and Yoko runs at the Liverpool Museum, Pier Head until 22 April 2019. You're unlikely to have the opportunity to see some of these items ever again so I'd definitely recommend you try and visit while you can.

Thank you Yoko for bringing this to Liverpool.

Some thoughts on some other things I would like to have seen in the exhibition: 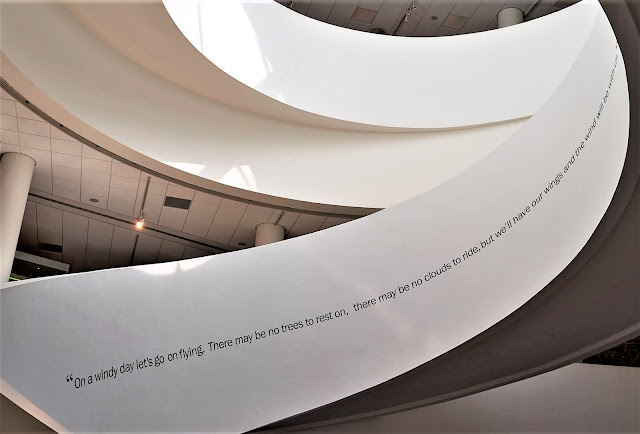