Here are some more of my photographs taken during my visit to the new John and Yoko exhibition at the Museum of Liverpool, these covering items from the period 1970 to 1972.
1970 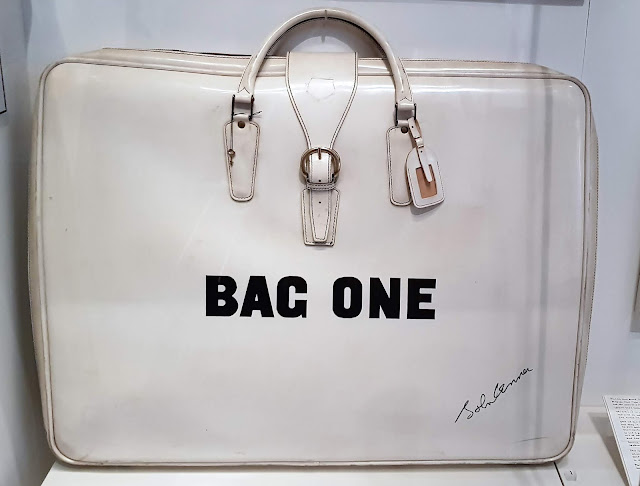 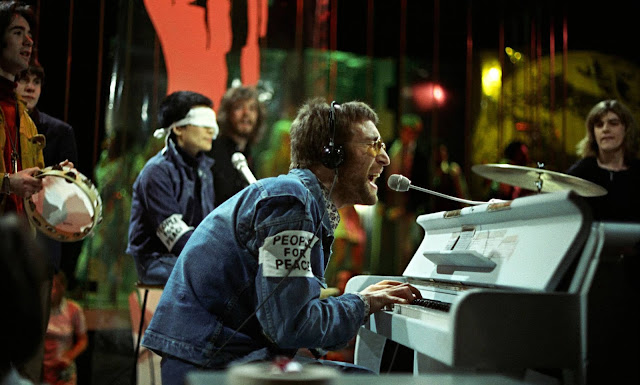 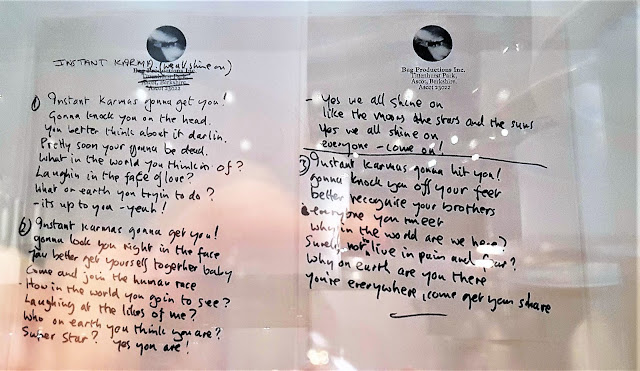 Also dating from early 1970 we have John's handwritten lyrics to 'Instant Karma!' released as a single on 6 February 1970 (though not the same set as the ones he used on 'Top of the Pops', see above). From the Summer we have the lyrics to 'Mother', completed during John's Primal Therapy treatment in California and recorded in October 1970 for his 'Plastic Ono Band' LP. 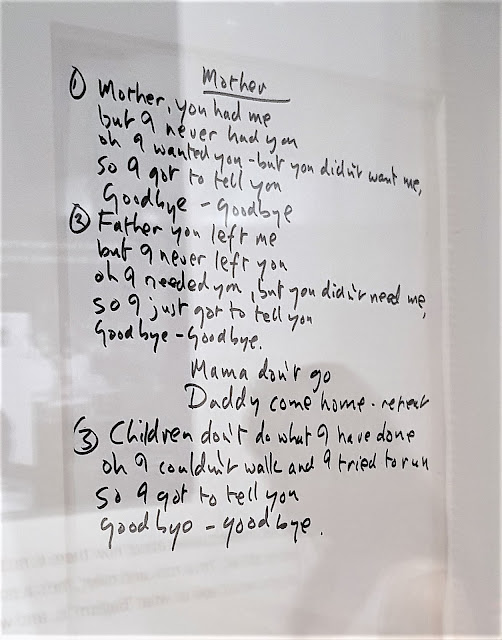 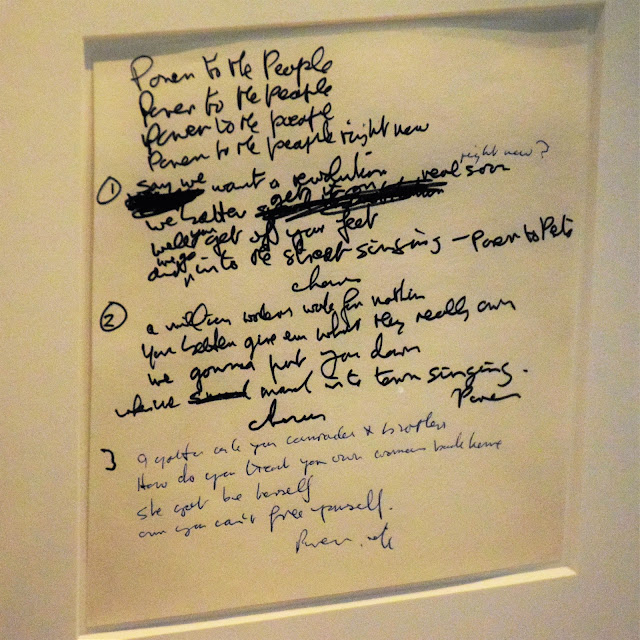 The lyrics to 'Power To The People', released in March 1971. Pictured below is the sleeve for the Japanese single. Take in the details on the US Army shirt he's wearing. I've discovered some delightful triva during the course of writing this particular blog which I'll reveal in a moment. 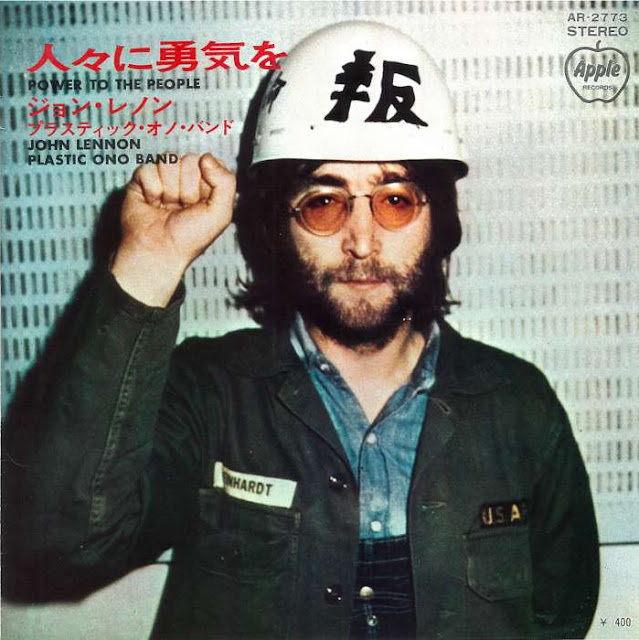 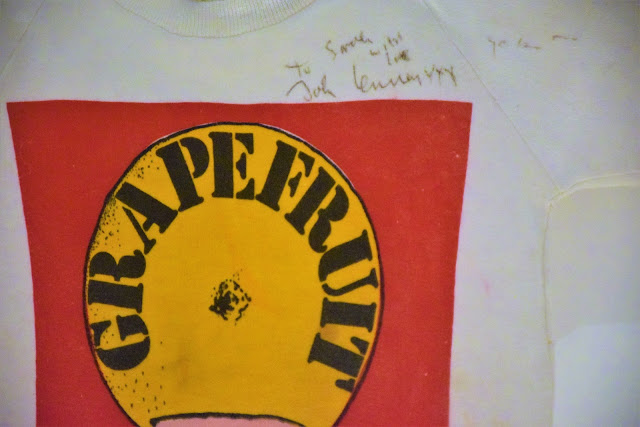 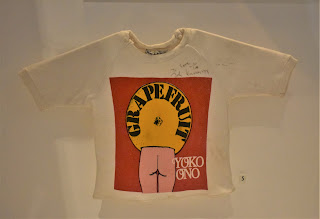 (Above and left) A child's tee-shirt promoting the paperback edition of Yoko Ono's book of instructional poems 'Grapefruit' signed by John and Yoko at the book launch on 15 July 1971 held at Selfridges store in London.


Below are John's handwritten lyrics to perhaps his most famous solo song, 'Imagine'. 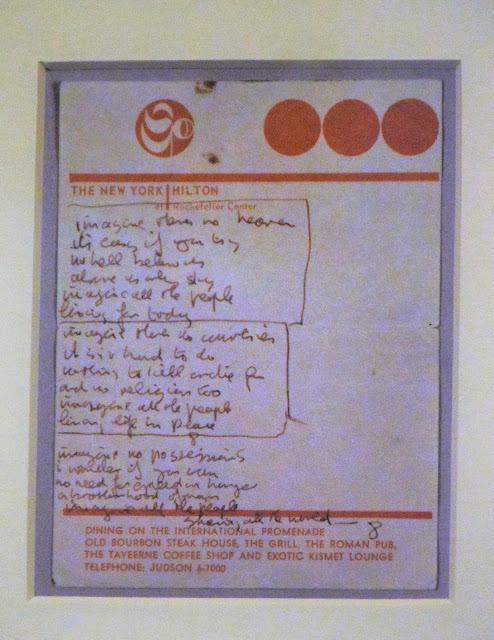 Finally from 1971 we have John's handwritten lyrics to Happy Christmas (War Is Over), released in the U.S. in December 1971 but not until November 1972 in the U.K. 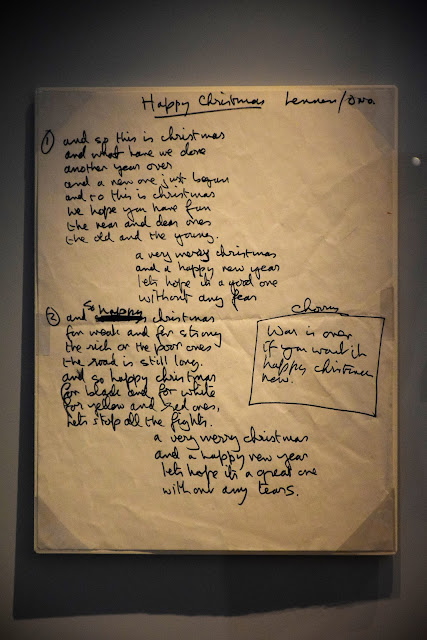 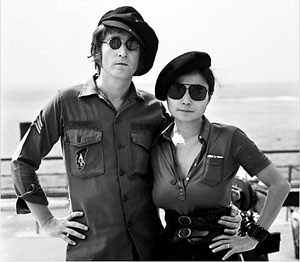 One of the most instantly recognisable items in the exhibition is John’s US Army shirt because he was photographed and filmed wearing it on many occasions during his first year in America, perhaps most famously on stage at Madison Square Garden in 1972. 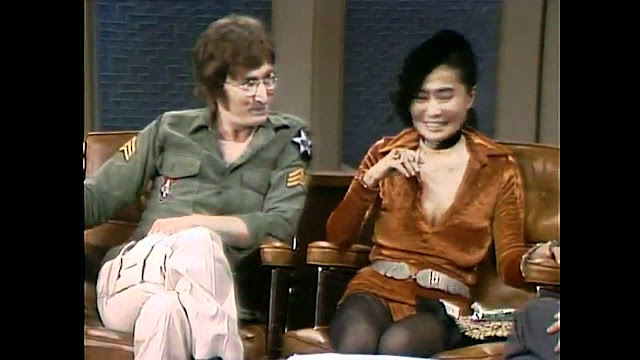 He also wore it on the Dick Cavett show on 11 September 1971 where he explained how he got it: It’s very funny, I was in the German Airport, I had an American Army mac on and a guy came up and said, I just got out of the Army in Vietnam and if you’d like these clothes I’d love to give them to you, ‘I said alright’, and he sent me all these Army clothes in the post...a few years ago it was.


The German airport was likely Frankfurt, the southern side of which was home to the Rhein-Main Air Base, a major air base for the United States from 1947 until 2005. John and Yoko stopped off in Frankfurt on 4 June 1969 on their way home to London from the Montreal Bed-In.* 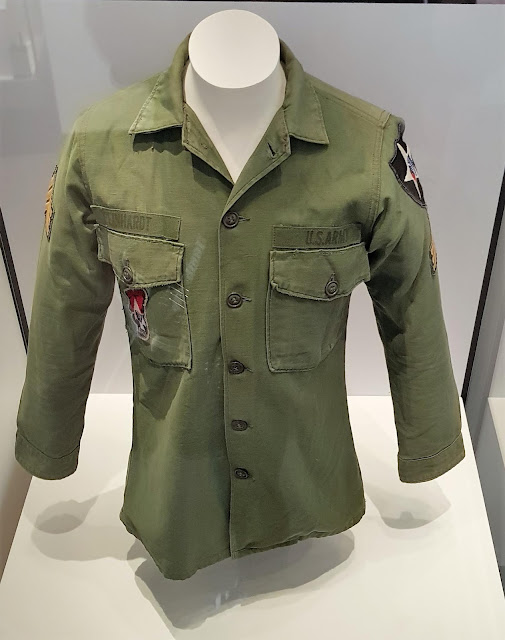 The name on the breast pocket is Reinhardt and the stripes on the sleeve indicate the rank of sergeant. The distinctive shoulder patch, I discovered, belonged to the U.S. Second Infantry Division. Out of curiosity I decided to Google Sgt. Reinhardt, Second Infantry Division to see if I could find anything out about the man who sent John Lennon his U.S. army uniform.

Amazingly, after just a little bit of digging I struck gold.

Sergeant Peter James Reinhardt served in Vietnam and latterly South Korea which is where this particular jacket originates as the 'Imjin Scout Regiment DMZ' patch on the right breast pocket and Second Infantry Indian patch on the left shoulder relate directly to the U.S. mission to defend South Korea from North Korean invasion. A role the division still has today. 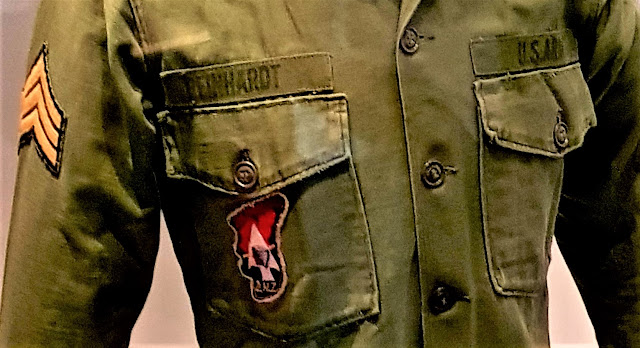 The site feelnumb.com did a piece on the shirt a couple of years ago and in March 2017 managed to make contact with the Reinhardt family. Sadly Sergeant Reinhardt passed away in 2007 but his sister Linda and brother Peter were able to provide the site with some more background to the story.

Linda Reinhardt: Peter worked for Delta Airlines when he left the Army and had free travel. On his way to see his mum he met John Lennon and got talking. Peter in his own way told Lennon that the military jacket he was wearing was “Crap” and offered to send him one of his (which of course he did).

Lennon gave Peter his address and promised to send one in return (which he never did). They spent a long flight chatting and when they landed Lennon gave Peter some signed stick figure drawings he was doodling on the plane. (2017)** 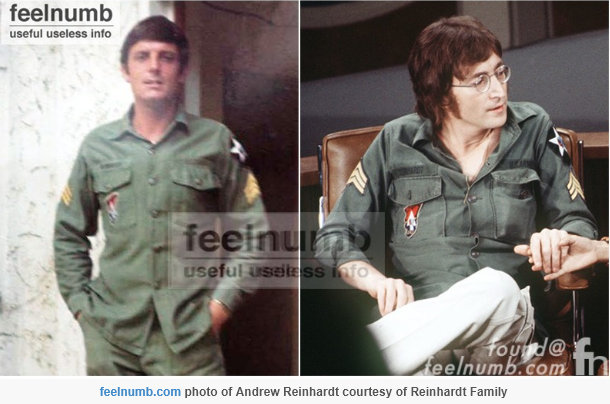 The photo above shows Andrew Reinhardt wearing the shirt his brother later sent to John Lennon.  Andrew was in the British Army and in 1968 during a visit to see Peter they decided to pose in each other's uniform. Amazing! 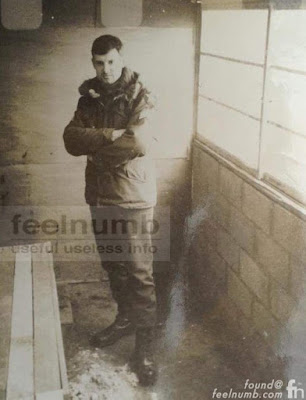 We know that John wore at least one other item from the bundle of army clothes Peter sent him. Have a look again at that 'Power To The People' picture sleeve. John's wearing a different shirt with the 'Reinhardt' name on a white background and no visible insignia on the sleeves


He may even have worn a third. 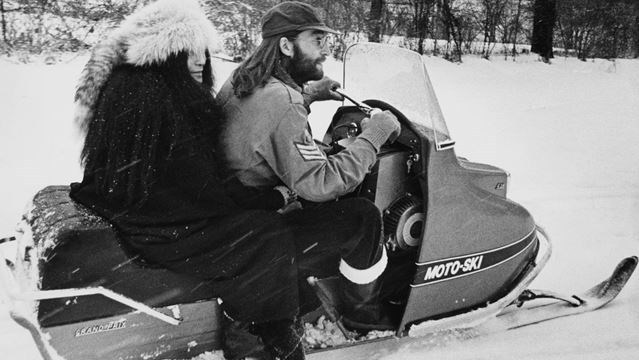 This photo was taken by Bruce Reed during John and Yoko's stay with Ronnie Hawkins on his farm in Mississauga, Ontario in December 1969 and shows John wearing a shirt with reversed Sergeant stripes with a small crest above them. To date I've yet to find a photo of this shirt with the name badge visible.


The tagline of the feelnumb site is 'useful useless info'. I call this kind of thing 'deep triva'. Whatever gets you through the night . In any event I hope you agree that it was a pleasant diversion.


To round off part 3 of my review of the Double Fantasy - John and Yoko exhibition here are the lyrics to three of John's compositions from late 1971 - early 1972 which would appear on the album 'Some Time in New York City' . He may well have been wearing one of Peter's army shirts when he wrote them. 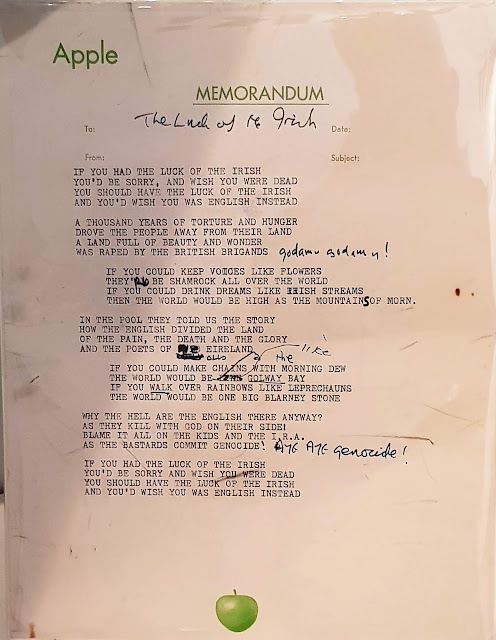 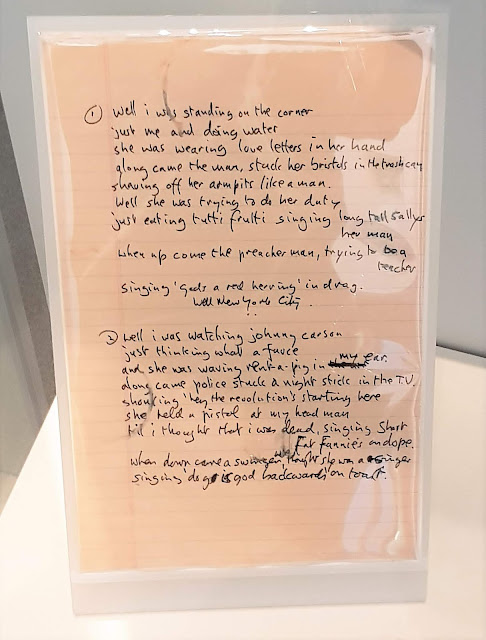 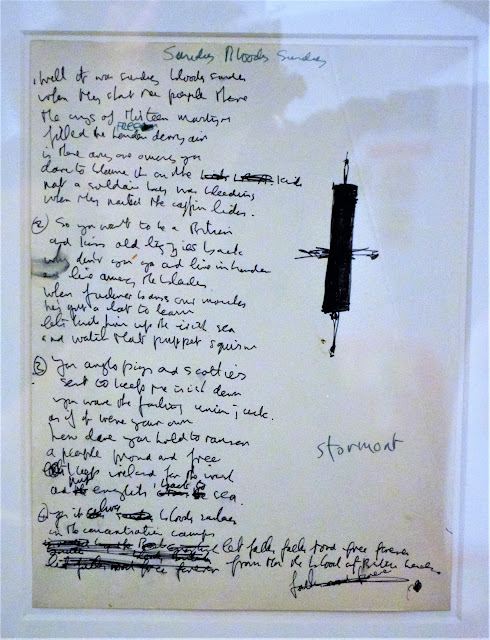 Notes:
* I asked Lennon expert Chip Madinger if he was aware of any other occasions when they could have visited a German airport. According to John's passport the only other occasion was in 1977 when he was travelling with Elliot Mintz.