The morning after Yoko attended the preview of the Museum of Liverpool's new 'Double Fantasy' exhibition she visited 'Mendips', John's former home on Menlove Avenue. Yoko bought the house in March 2002 and donated it to the National Trust who then restored the house to its 1950s appearance, as it would have looked while John lived there.

Yoko was heavily involved with the restoration, allegedly insisting that a series of creaky steps at the top of the stairs remained, as she recalled John saying he had to sneak over them while returning home from gigs in case he woke his Aunt Mimi. 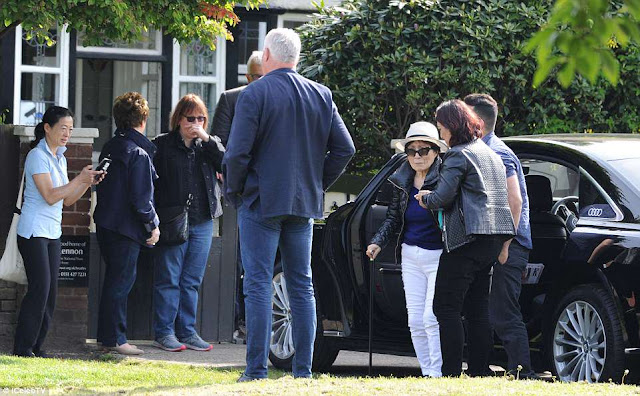 According to newspaper reports, the National Trust guide at 'Mendips' said that Yoko needed assistance to get into the house, something sadly confirmed by the long lens photographs accompanying the story 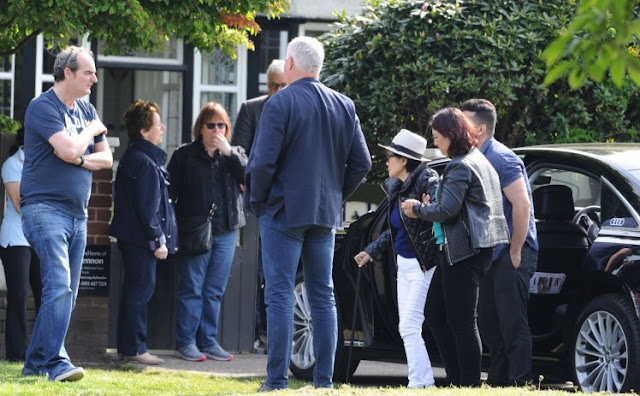 The 85-year-old certainly looked frail as she was helped from the car and up the path to Lennon’s former home. 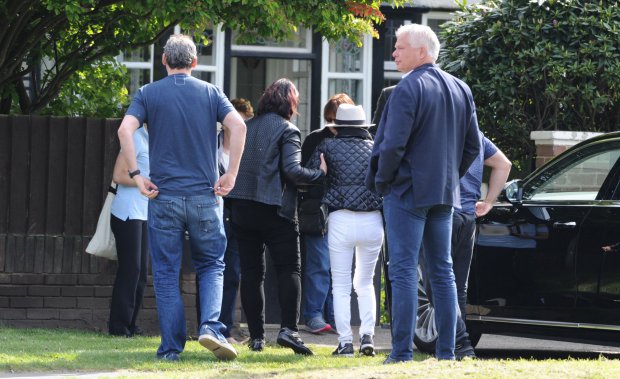 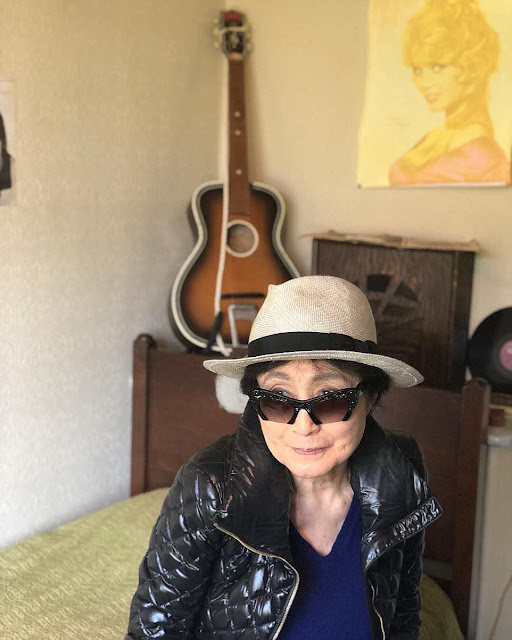 While Yoko was inside she posted a photo of herself in John's old bedroom online, writing: This is John’s room in Menlove Avenue. I feel John here with me... I love you, John. Yoko.

I'm not sure who took the photograph because as anybody who has visited 'Mendips' will tell you, the National Trust prohibits photography inside the house. It's reassuring to know that even at 85, Yoko is prepared to defy convention.

Sean Lennon seems to have spent Friday morning doing his own thing (see my earlier post) though it is thought that he too came to 'Mendips' at some point during the visit. 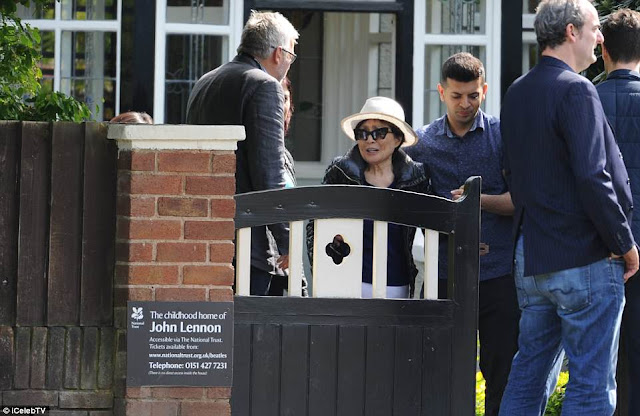 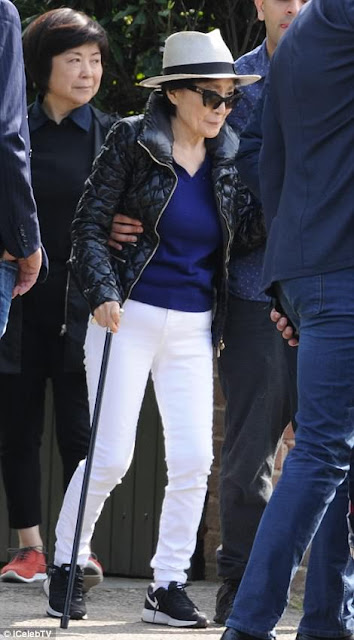 During the opening week of the new exhibition one newspaper quoted a man in a Liverpool pub saying:

She took him away from us, but she has always come back to Liverpool. She has not forgotten us.

His friends agreed. Today there does seem to be a grudging respect for the woman who was once seen as wrecker of the Beatles, the evil post- Second World War 'Jap' who bewitched Lennon, stole him away from his family and made him do stupid things in public.


Many of today's artists and musicians now freely admit to her influence when such admissions would have faced scorn and ridicule back in the late sixties.

Even Beatles' fans who fail to fully appreciate her have to admit that since John's death she has done a fine job of keeping his legacy alive, treating them to many worthwhile archival releases of books, music and film as well as unique exhibitions such as Double Fantasy - John and Yoko.

One could even make a case for Yoko buying 'Mendips' for the enjoyment of John's fans - it seems the National Trust had no interest in it when it originally went up for sale.
9 Newcastle Road
Wavertree
Liverpool, L15 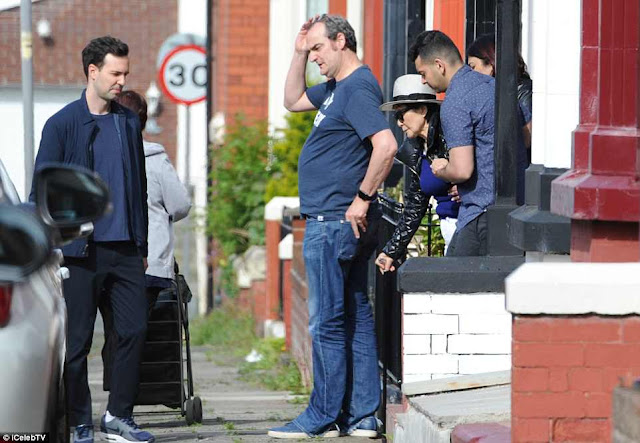 Quite unexpectedly Yoko was also photographed that same day coming out of John's first home at 9 Newcastle Road (see above).

It had long been rumoured that when the house was sold at auction in 2013 Yoko was the 'anonymous American buyer' who had paid three times the asking price but this was the first confirmation and it is believed this was the first time she had visited.

My sources on the street have confirmed that after the sale the house underwent a lengthy period of renovation. Yoko's ultimate intentions for the house are unknown but having toured the house myself during the viewing period prior to the sale it was apparent that many of the original features were still present (doors, lino, stair bannisters etc) which would make the task of returning it to its late 1940s appearance fairly straightforward, if indeed that is the plan.

Of course Yoko's latest visit to Liverpool co-incided with the 50th anniversary of her and John becoming a couple in May 1968 so let's have a look at some of the exhibition items on display from that year. 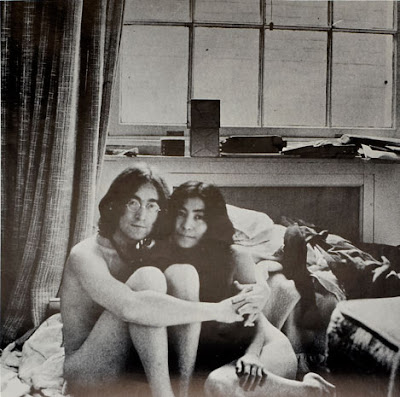 John and Yoko's earliest collaboration, and one of their most 'infamous' is their experimental 'Two Virgins' album recorded the night they first got together in May 1968.

The album was notorious for it's cover, the front of which showed the couple frontally nude, including 'Lennon's uncircumcised penis and Ono's breast and pudendal cleft, along with both Lennon's and Ono's unkempt pubic hair'. **

The rear cover, naturally enough showed them nude from behind including their buttocks.

John would later comment: We used the straightest, most unflattering picture just to show that we were human.

On 1 July 1968 John and Yoko opened their first joint art exhibition entitled 'You Are Here (To Yoko from John Lennon, With Love)', at Robert Fraser's Gallery at 69 Duke Street, London.

Lennon and Ono wore white, to match the white gallery walls and many of the exhibits, a theme replicated in the new 'Double Fantasy' exhibition. 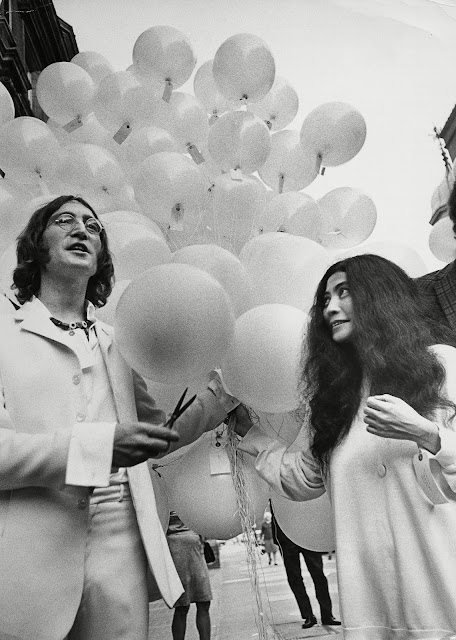 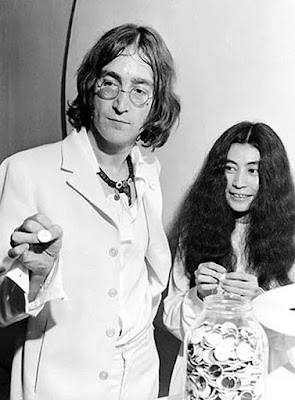 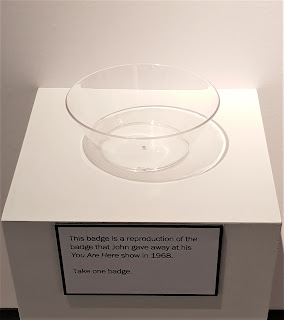 At the launch ceremony Lennon and Ono handed out badges (pins) to the assembled reporters and guests. The badges were contained in a large jar, something replicated in Double Fantasy - John and Yoko but unfortunately when I visited (admittedly late in the day) all of the badges were taken. I don't know whether the plan is to refill the jar every day or simply until the stock is exhausted. Perhaps the idea is that you just take an 'imaginary' badge?

Another memento from the opening of the 'You Are Here' exhibition originates from the 365 white helium-filled balloons John released over London, famously proclaiming 'I declare these balloons high'.
Attached to each balloon was a printed card with the words 'You are here' on one side, and 'Write to John Lennon, c/o The Robert Fraser Gallery, 69 Duke Street, London W1' on the reverse. One of the returned cards is included in the exhibition with an accompanying letter. 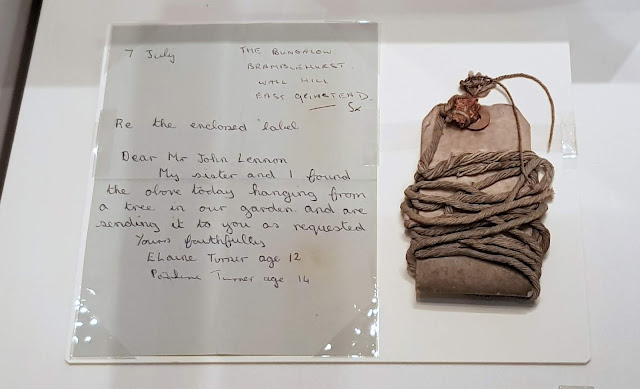 It was found a week later nearly 60 miles away in East Grinstead, hanging from a tree in the garden of Elaine and Pauline Turner, ages 12 and 14 respectively.
Perhaps these two sisters were among those returning cards who received a letter signed by John, which read: 'Dear Friend, Thank you very much for writing and sending me my balloon back. I'm sending you a badge just to remind you that you are here. Love, John Lennon.' 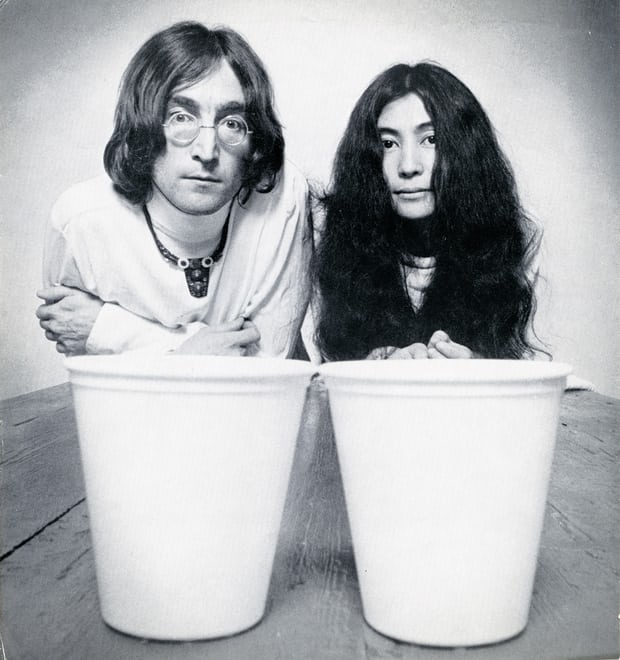 This 1968 photo is used on the promotional material for the new exhibition. 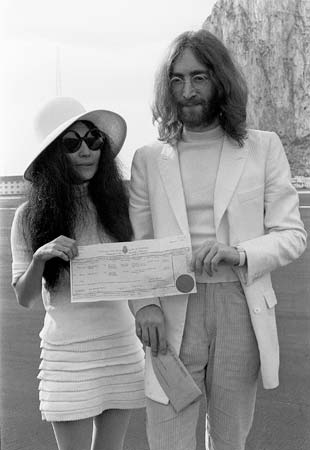 John and Yoko married in Gibraltar near Spain on 20 March 1969. They flew in from Paris.

We chose Gibraltar because it is quiet, British and friendly. We tried everywhere else first. I set out to get married on the car ferry and we would have arrived in France married, but they wouldn't do it. We were no more successful with cruise ships. We tried embassies, but three weeks' residence in Germany or two weeks' in France were required.

It was very romantic. It's all in the song, 'The Ballad Of John And Yoko'. If you want to know how it happened, it's in there. Gibraltar was like a little sunny dream. I couldn't find a white suit – I had off-white corduroy trousers and a white jacket. Yoko had all white on. 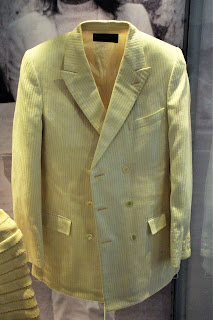 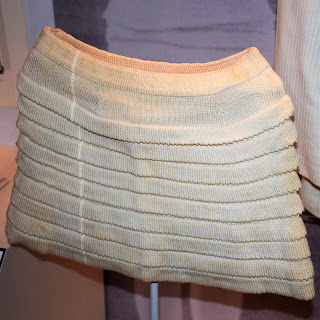 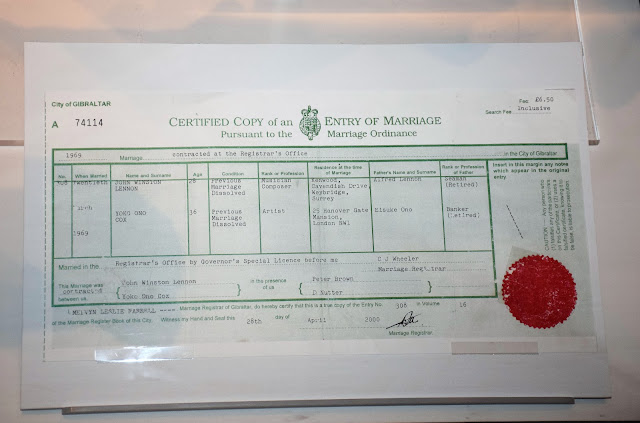 After the short ceremony they returned to Paris. While their marriage service was a private, low-key affair, their 'honeymoon' was anything but. On Tuesday 25 March the newly weds arrived in Amsterdam, staging the first of their two 'Bed-In's. Aware that their marriage would attract extensive press coverage they decided to use the free publicity to promote world peace, a subject which would consume most of John and Yoko's time and energy for the remainder of 1969 and beyond.


Drove from Paris to the Amsterdam Hilton, Talking in our beds for a week,
The newspapers said, say what you doing in bed?
I said, were only trying to get us some peace
(The Ballad of John and Yoko)


We thought instead of just being 'John and Yoko Get Married', like 'Richard and Liz Get Married', [it should be] 'John and Yoko get married and have a bed-in for peace'. So we would sell our product, which we call 'peace'. And to sell a product you need a gimmick, and the gimmick we thought was 'bed'. And we thought 'bed' because bed was the easiest way of doing it, because we're lazy. It took us a long train of thought of how to get the maximum publicity for what we sincerely believed in, which was peace – and we were part of the peace movement. (John Lennon, Anthology) 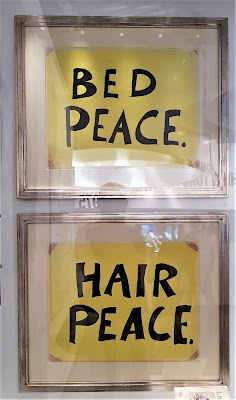 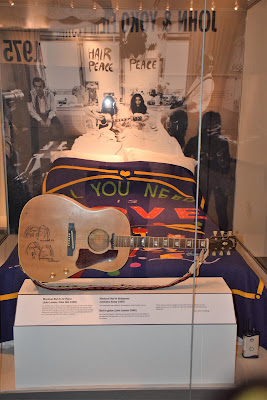 Original Peace Signs from the Amsterdam Bed In and a recreation of the Montreal Bed-In feature in the new Double Fantasy - John and Yoko exhibition.

Following their seven-day bed-in for peace at the Amsterdam Hilton in March 1969, John and Yoko held a second event at the Queen Elizabeth Hotel in Montreal, Canada. Montreal wasn't their first choice; initially they had planned to hold it in New York, but Lennon wasn't allowed into the country due to his conviction for cannabis possession the previous year. An attempt to hold it in the Bahamas was aborted on arrival when they found the room was unsuitable and the Island itself was further from the United States than they'd thought (and therefore less likely to attract the World’s press in the numbers they wanted). Montreal was close enough however and they spoke to around 150 journalists a day

The second bed-in began on the morning of Monday 26 May 1969 and continued until the late hours of 1 June when John, Yoko and assorted visitors recorded ‘Give Peace A Chance’. They flew home the following day, via Frankfurt. (49 years ago today!) 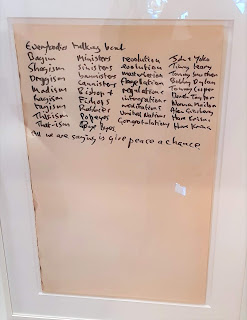 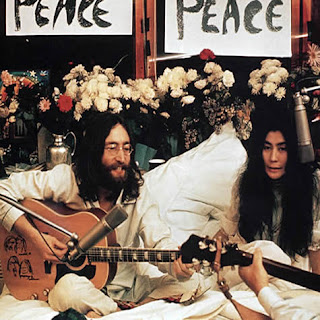 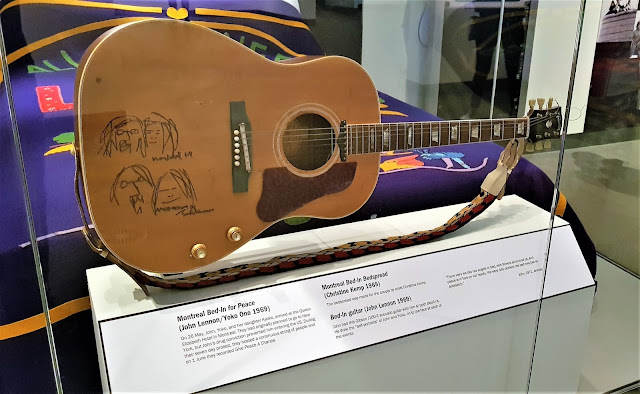 Artefacts from the Montreal bed-in on display in Liverpool include John's Gibson J-160E guitar used on the recording of 'Give Peace A Chance' together with John's handwritten lyrics for the same song. Note the guitar is the same one used on early Beatles recordings and seen in several early TV appearances - notably on Granada TV. At some point during 1968 John had the original sunburst finish removed from the guitar, stripping it back to its natural wood appearance. By the time of the bed-in he'd added the John and Yoko cartoons.


More photos from the Double Fantasy - John and Yoko exhibition to follow in part 3.

** as colourfully described in Wikipedia (!)

Photos of Yoko's visit from iCelebTV.

All photographs from the exhibition were taken by me.

The 1968-69 photos of John and Yoko are from my 'archive', originally found on-line