Yoko and Sean visit Liverpool May 2018 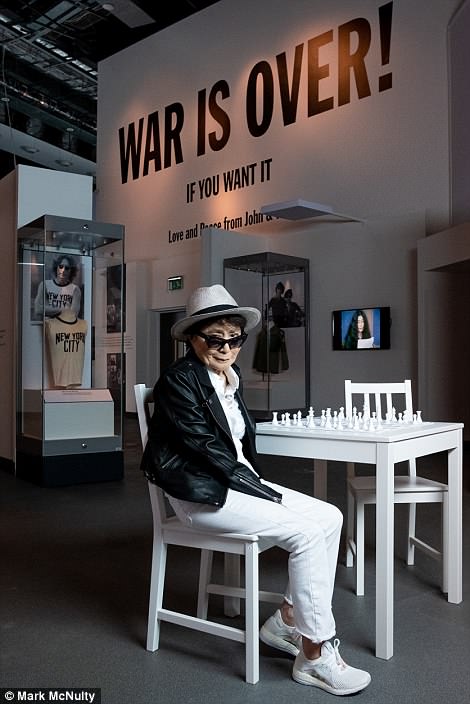 Last week Yoko Ono and Sean Lennon visited Liverpool.
The news broke on the afternoon of Thursday 17th May when the respected Liverpool based photographer Mark McNulty posted this photo with the caption - The day’s always a good day when you get to photograph Yoko Ono. Her Double Fantasy exhibition opens tomorrow at Museum of Liverpool #itsliverpool #johnandyoko

Yoko was in town to open the Museum of Liverpool’s Double Fantasy – John and Yoko, a free exhibition which celebrates their personal and creative partnership, the acorns of which were planted shortly after they first met in 1966 and ballooned once they became a couple in 1968. It continued until John’s passing in 1980. 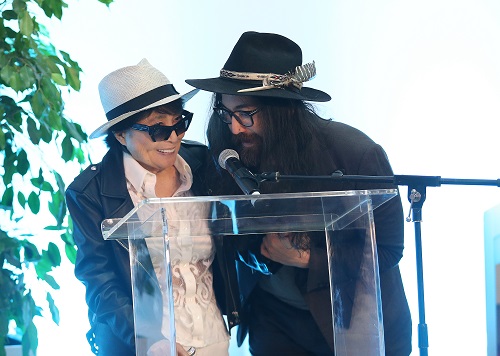 Accompanied by her son Sean at the opening Yoko gave a heartfelt speech, sharing her love for Liverpool and how much it meant for her to have the exhibition in John’s hometown.

I am so happy and grateful that we are having our Double Fantasy – John and Yoko show in Liverpool. This is where John was born and I know John would be very happy too.

We were a very simple couple just loving each other every day and I just wanted to show the simple truth of us. In our personal life we were pretty simple people, and we made all sorts of things with love for each other. Everything was made out of love. We found that we were both very strongly interested in world peace. I feel John and I are still working together. I always feel his warmth next to me. 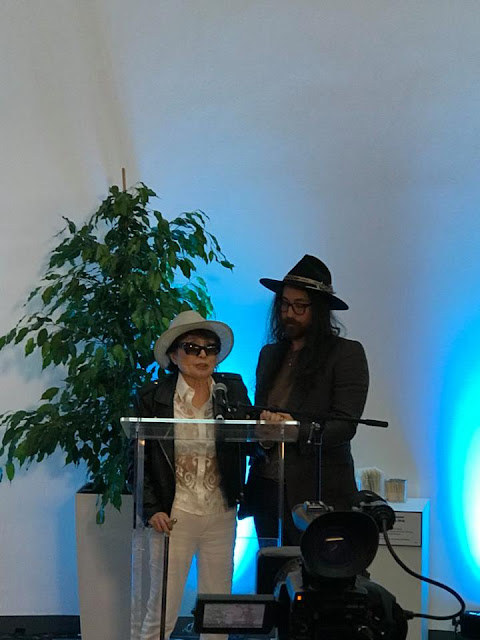 Yoko and Sean during the opening speech, though looking at the above photo cold you'd be forgiven for thinking they are about to turn on some Christmas lights or perhaps blow up an old chimney stack.

The exhibition opened to the public the following day on 18 May, the 50th anniversary - the museum’s advance publicity proudly announced – of the couple’s first night together in 1968, where they produced their album Unfinished Music No. 1: Two Virgins. It’s a nice story, but it’s now generally believed they first got together two weeks earlier.

Obviously the exhibition could not have taken place without Yoko’s consent. As well as giving her blessing to the museum she helped out, providing personal objects including art, music and film she’d produced with John.

The museum’s own site describes the event thus:

Taking a chronological journey, the exhibition starts with two unique individuals - a leading figure in the avant-garde art world and a global rock 'n' roll star. From a tender first meeting at Indica Gallery in London, it was 18 months later that the album 'Unfinished Music No. 1: Two Virgins' was issued. What followed was breathtaking in its rapidity and productivity until John's tragic and untimely death on 8 December 1980.

Through interviews, quotes and lyrics, the story of their personal and creative relationship along with their political activism and peace campaigning, is told in their own words for the very first time. 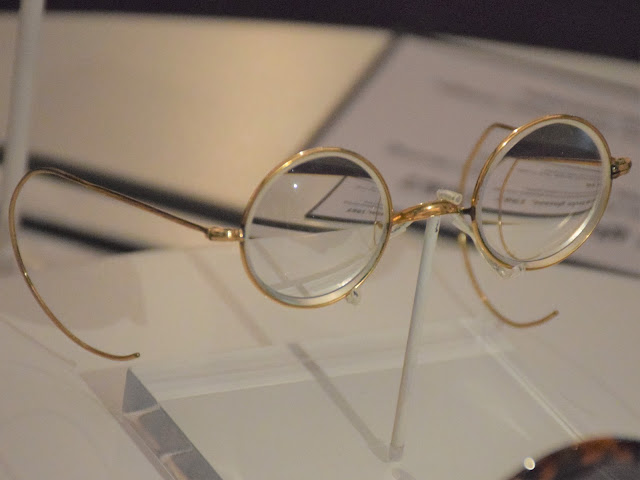 I was keen to attend and see the treasures on display in person.  Here are my photos of some of the highlights, accompanied by explanatory quotes from John and Yoko when I could find them.

The first part of the exhibition covers John and Yoko's artistic and creative endeavours from childhood up to their meeting in 1966. In John's case this naturally includes a few Beatle-era items but it should be stressed that this is not an exhibition about the Beatles. 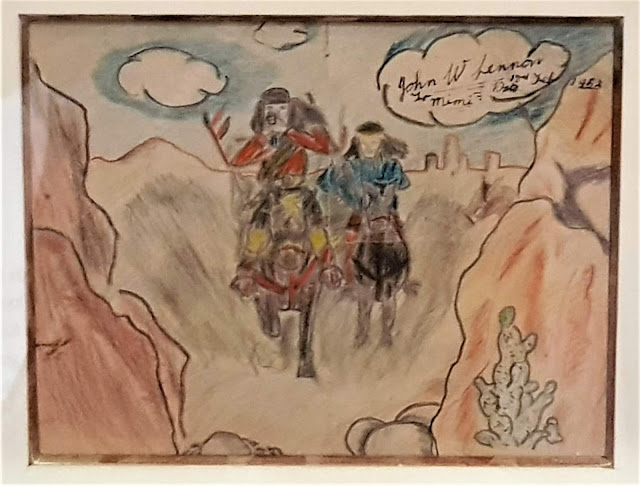 This painting, entitled Indians was completed by an 11 year old John on 18 February 1952 (co-incidentally Yoko's birthday). It later appeared as part of the cover for the Walls and Bridges album released in  1974 (see below). 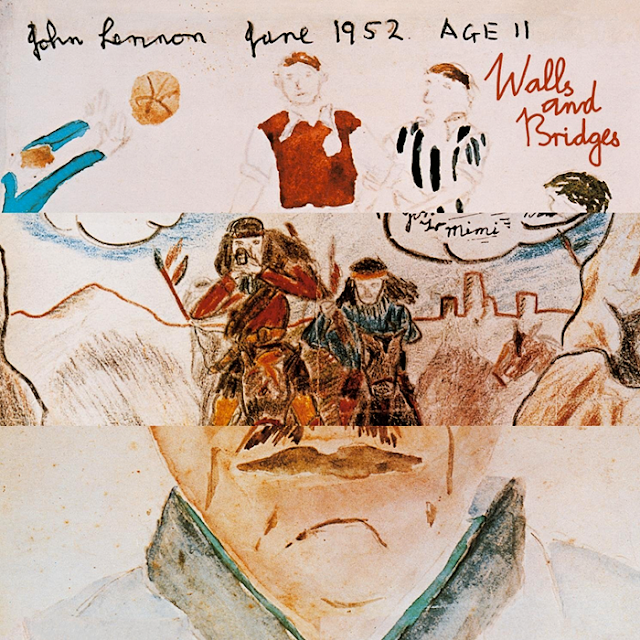 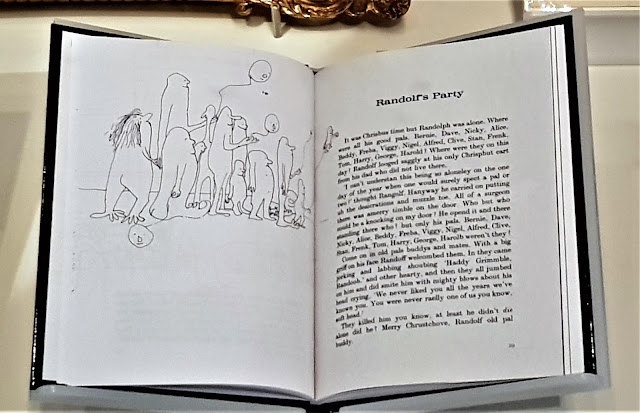 John's first book of poetry, verse and short stories (with pictures!) entitled In His Own Write. The book is displayed open on the short story 'Randolf's Party', now thought to be a thinly veiled attack on Pete Best - We never liked you all the years we’ve known you. You were never really one of us you know, soft head.

Was this page chosen deliberately? 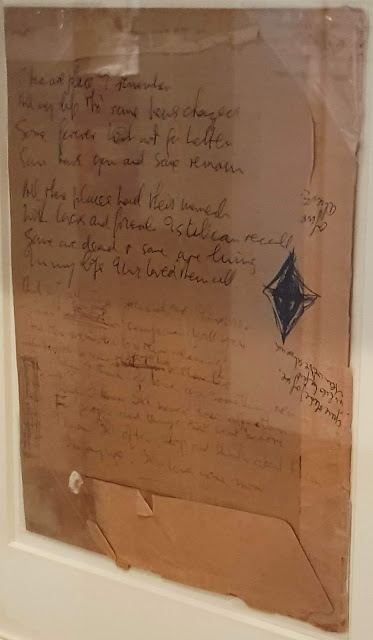 The year John and Yoko met 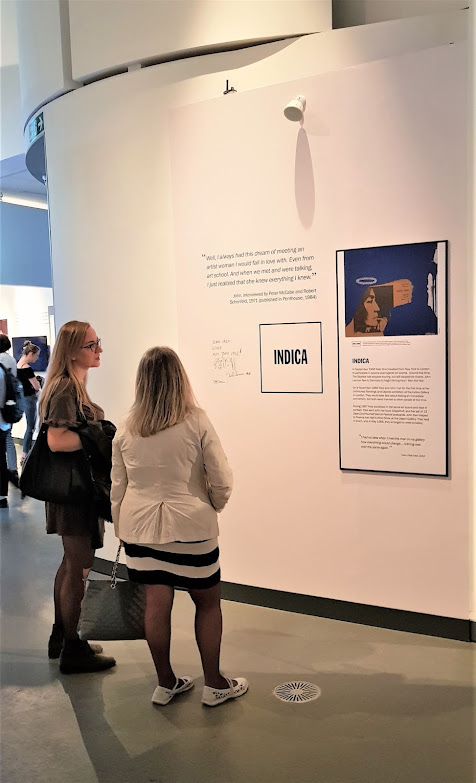 John Lennon: Yoko was having an art show in London at a gallery called Indica Gallery and I heard this was going to be a happening. So I went down the night before the opening.

John was introduced to Yoko by Indica’s owner, John Dunbar, who was among the underground avant garde art crowd that The Beatles (Paul and John), the Rolling Stones et al were mixing with at the time.


There was a sort of underground clique in London; John Dunbar, who was married to Marianne Faithfull, had an art gallery in London called Indica, and I'd been going around to galleries a bit on me off days in between records, also to a few exhibitions in different galleries that showed sort of unknown artists or underground artists.

I got the word that this amazing woman was putting on a show the next week, something about people in bags, in black bags, and it was going to be a bit of a happening and all that. 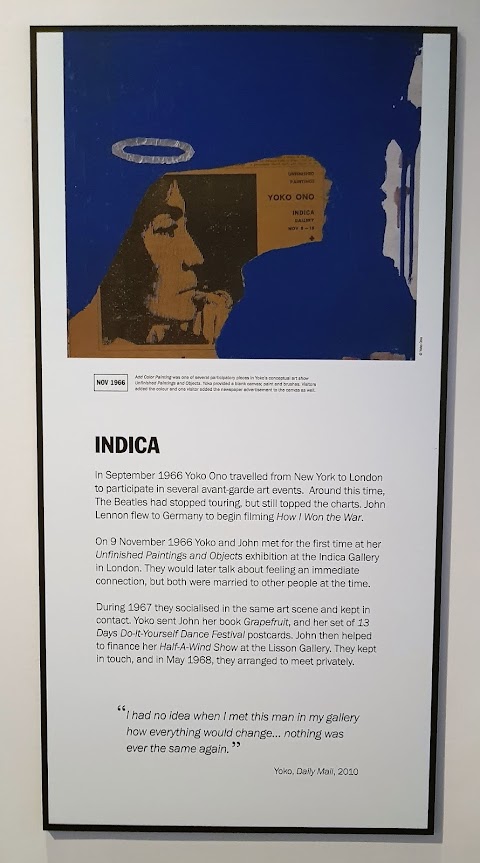 The name of Yoko's show has changed over the years through re-telling. It is most often referred to as Unfinished Paintings and Objects by Yoko Ono but on the cover of the exhibition catalogue it is simply entitled Yoko at Indica.

So I went to a preview the night before it opened. I went in – she didn't know who I was or anything – and I was wandering around. There were a couple of artsy-type students who had been helping, lying around there in the gallery, and I was looking at it and was astounded. 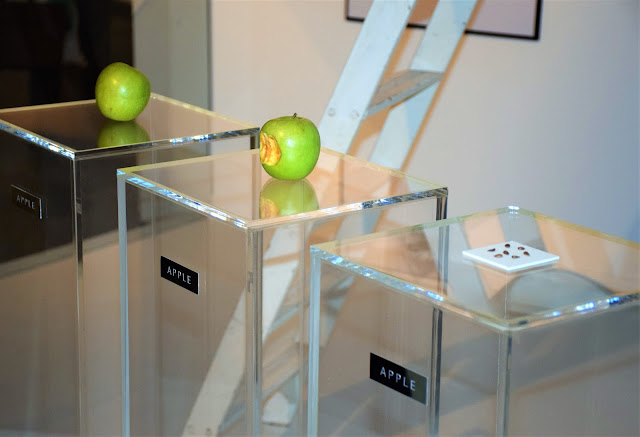 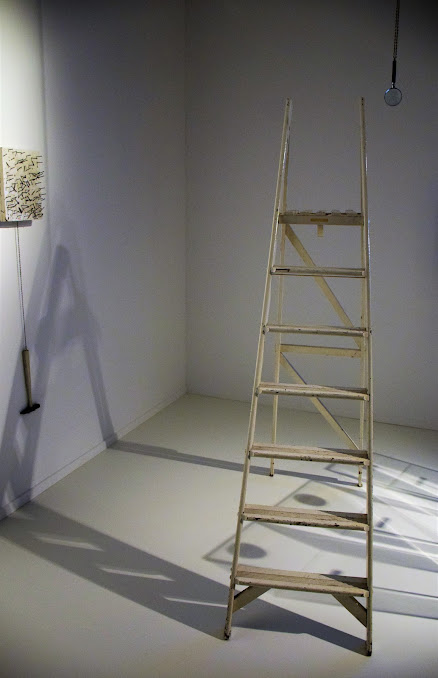 There was an apple on sale there for two hundred quid; I thought it was fantastic – I got the humor in her work immediately. I didn't have to have much knowledge about avant-garde or underground art, the humor got me straightaway. There was a fresh apple on a stand – this was before Apple – and it was two hundred quid to watch the apple decompose.


But there was another piece that really decided me for-or-against the artist: The first thing that was in the gallery as you went in there was a white stepladder which led to a painting which was hung on the ceiling. It looked like a black canvas with a chain with a spyglass hanging on the end of it. . I climbed the ladder, you look through the spyglass and in tiny little letters it just said 'yes'.

I felt relieved. It's a great relief when you get up the ladder and you look through the spyglass and it doesn't say 'no' or 'f-k you' or something, it said 'yes'.

If it had said "no" I would have left the gallery but because it was positive, it said "yes" I thought "this is the first show I've been to that said something warm to me. Then I decided to see the rest of the show, and that's when we met."


Yoko Ono: I had no idea when I met this man in my gallery, how everything would change....nothing was ever the same again 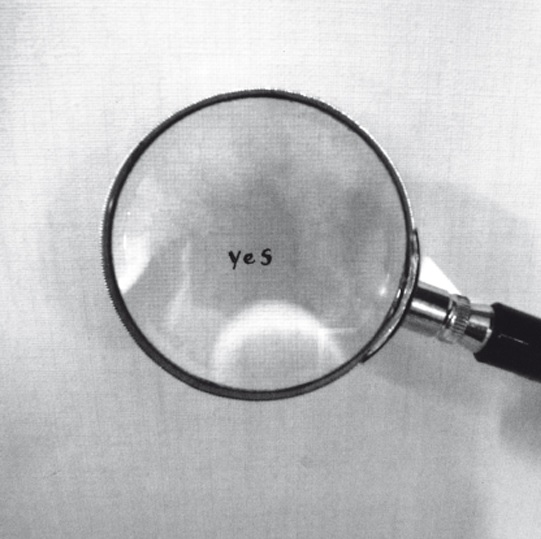 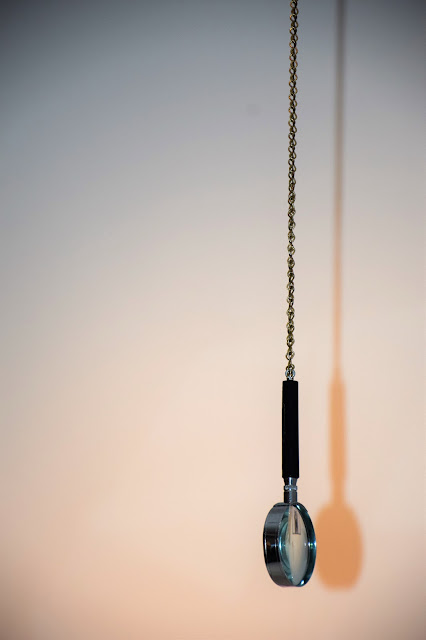 It would show up many years later as Play It By Trust, and continue to be one of Yoko's most recognised pieces, due to its inclusion in several of John and Yoko's films and music videos including the full length Imagine movie. 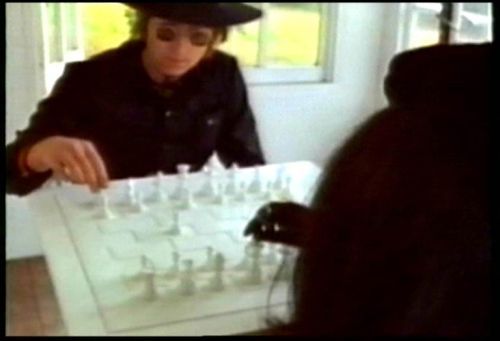 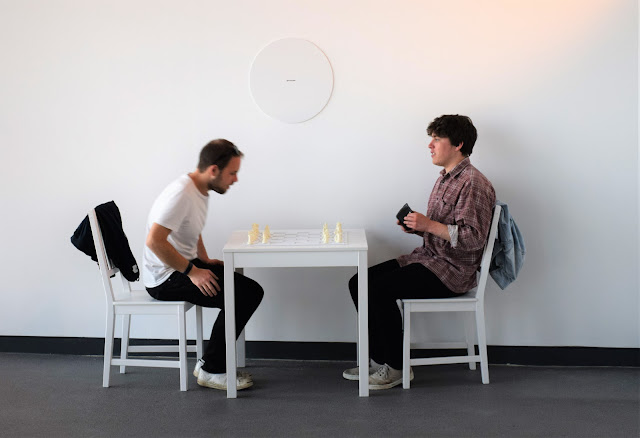 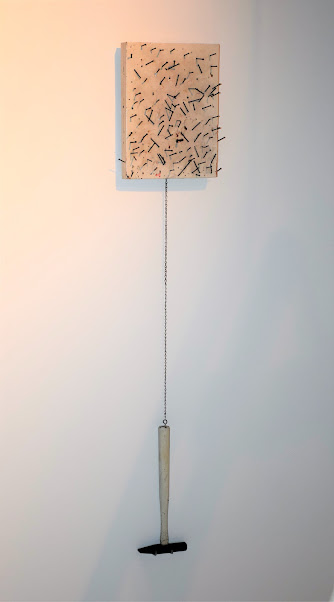 Another Indica piece on show in Liverpool is Yoko's  Painting To Hammer A Nail In, a hammer attached to a block, into which people were invited to hammer nails.

John: Then I went up to this thing that said, 'Hammer a nail in.' I said, 'Can I hammer a nail in?' and she said no, because the gallery was actually opening the next day. So the owner, Dunbar, says, 'Let him hammer a nail in.' It was, 'He's a millionaire. He might buy it,' you know. She's more interested in it looking nice and pretty and white for the opening. That's why she never made any money on the stuff; she's always too busy protecting it!

Yoko sent John this first edition copy of her book Grapefruit  (below) shortly after they first met. Published in 1964, the book represents a seminal piece of conceptual art and was a direct influence on the lyrics and ideas behind 'Imagine'. 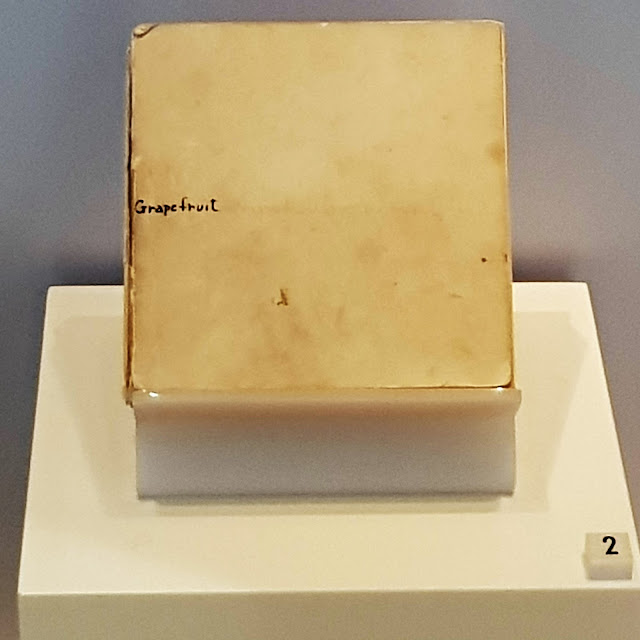 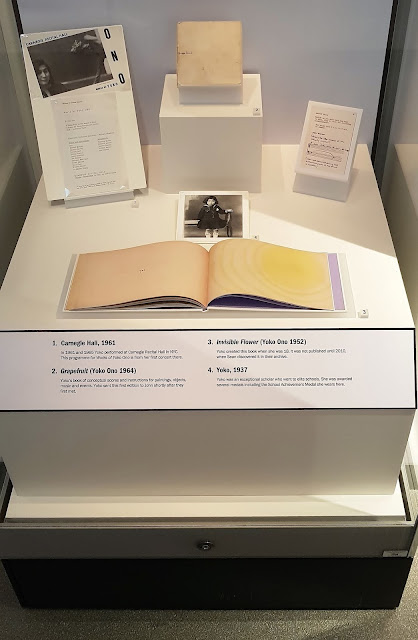 
Although they encountered each other 'on the scene' and sporadically kept in touch, John and Yoko did not get together until May 1968, a full 18 months after their first meeting.

In the meantime John had spent six months of 1967 inside the EMI studios on Abbey Road, recording the Beatles latest album 'Sgt. Peppers' Lonely Hearts Club Band' which was released at the end of May 1967.

In the summer the Beatles released the single 'All You Need Is Love' and dealt with the loss of their manager Brian Esptein who died at the age of 32 on 27 August.

They filmed their made for TV film 'Magical Mystery Tour' through the autumn and recorded the accompanying soundtrack, released in time for Christmas.

The first fruit of the Sgt. Pepper sessions - the double A-sided single Penny Lane / Strawberry Fields Forever  had been released back in February.  A fortnight earlier on 31 January 1967 the Beatles were in Sevenoaks, Kent making promotional films for the new single. During a break in the filming John visited an antiques shop where he purchased a 19th century circus poster advertising Pablo Fanque's Circus Royal appearance in Rochdale.

The poster provided the inspiration for one of Pepper’s most memorable songs, ‘Being for the Benefit of Mr. Kite!’.  Paul McCartney disputes the claim that John wrote the song alone: I read, occasionally, people say, 'Oh, John wrote that one.' I say, 'Wait a minute, what was that afternoon I spent with him, then, looking at this poster?' He happened to have a poster in his living room at home. I was out at his house, and we just got this idea, because the poster said 'Being for the Benefit of Mr. Kite' – and then we put in, you know, 'there will be a show tonight,' and then it was like, 'of course,'… The song just wrote itself.

John: Everything from the song is from that poster, except the horse wasn't called Henry (on the poster he's called Zanthus) 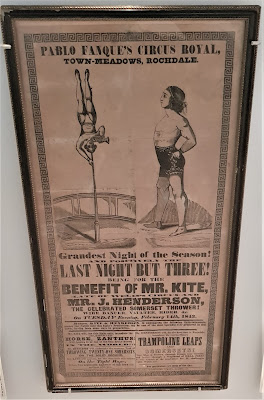 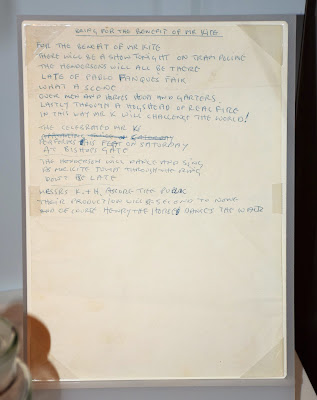 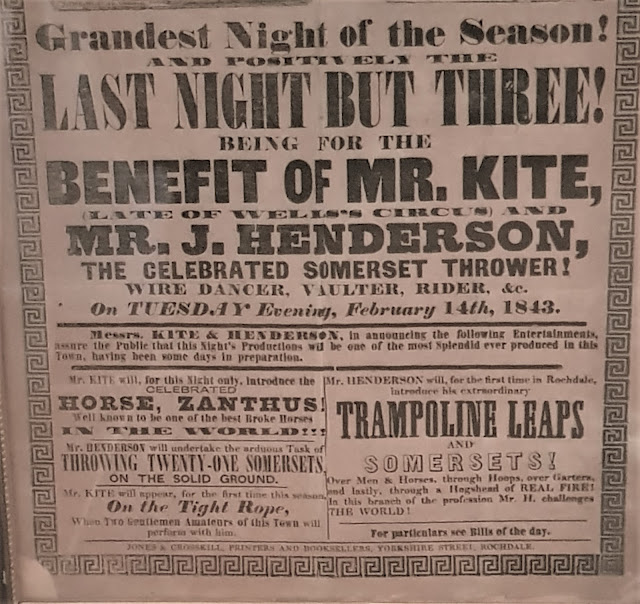