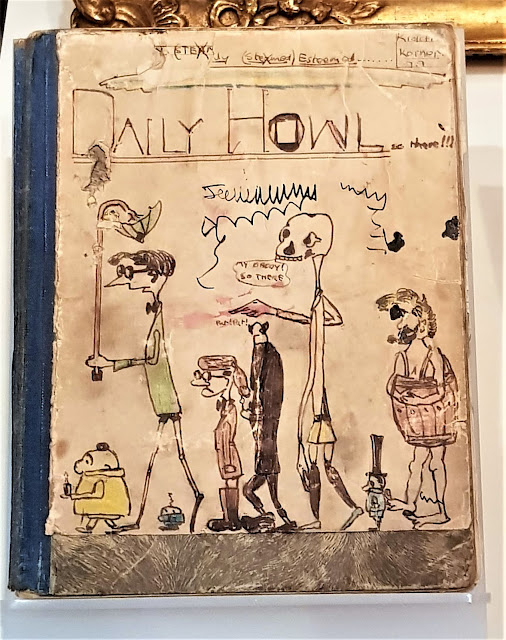 There were lots of amazing items on display at ‘Double Fantasy’ the new John Lennon and Yoko Ono exhibition which opened at the Museum of Liverpool Life on 18 May. I’ll be posting photos from the exhibition soon but as a taster here’s my favourite item on display, an original copy of John’s 1955 ‘Daily Howl’, written when he was 15.  I spent a good fifteen minutes reading it and laughed out loud on several occasions.

John Lennon: One of my earlier efforts at writing as a 'newspaper' called the Daily Howl. I would write it at night (at Mendips), then take it to school and read it aloud to my friends; looking at it now it seems strangely similar to the Goon Show! Even the title had 'highly esteemed' before it!

What started as bits of paper, taken in for the amusement of his classmates evolved into a full length self published school exercise book filled with his stories, poems, drawings and cartoons. He used to show it to Pete Shotton before he let anyone else see it. Pete was his best mate at Quarry Bank School and if it made Pete laugh John knew it was good enough to pass around the rest of the class.

Another classmate was Bill Turner: I remember it was at the time Davy Crockett was the rage and one of the poems was ‘The Story of Davy Crutch-Head.’ He also took a current hit song called ‘Suddenly There Was a Valley’ and he incorporated this into a story which went – ‘Suddenly there was a valet who rode up riding…’

There were quick flashes in the book such as a weather report: Tomorrow will be Muggy, followed by Tuggy, Wuggy and Thuggy.

He had an obsession for Wigan Pier; forever Wigan Pier kept cropping up – mainly in a story called ‘A Carrot in a Potato Mine’ – and the mine was at the end of Wigan Pier.

One of his favourite cartoons was a bus stop scene. I remember he wrote under the sign, which said ‘Bus Stop’ – ‘Why?’ And he had a flying pancake at the top of the cartoon and below it there was a blind man wearing glasses leading along a blind dog – also wearing glasses.

At one time ‘The Daily Howl’ was confiscated by one of the teachers and it went all round the staff before he got it back at the end of term.

It’s uncertain how many editions of the Daily Howl John produced. Loose pages of an original manuscript were sold in the 1988 auction at Sotheby’s in London for £12,000. 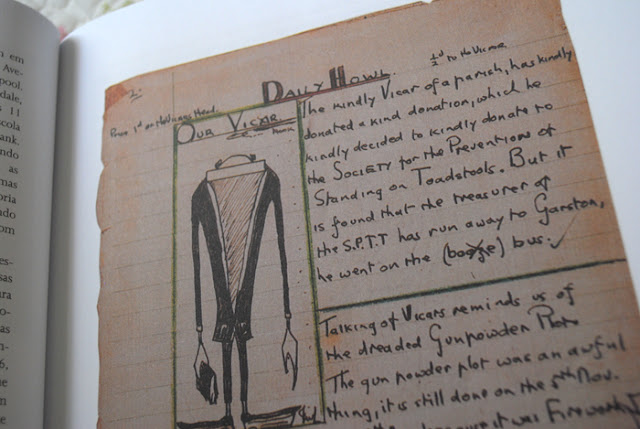 Bill Harry describes it as follows: The first page had Daily Howl as the banner headline with Price Id or McVicars Head to the left and 1/2d to the Vicar to the right. There was a drawing by John entitled ‘Our Vicar’, next to an item which read: "The kindly Vicar of a parish, has kindly donated a kind donation, which he kindly decided to kindly donate to the Society for the Prevention of Standing on Toadstools. But it is found that the treasurer at the S.P.T.T has run away to Garston, he went on the bus."

Below it is another piece: “Talking of Vicars reminds us of the dreadful Gunpowder Plot. The gun powder plot was an awful thing, it is still done on the 5th Nov. Guy Fawkes chose the 5th Nov because it was Firework Day. Guy Mitchell, the singer claims direct descent from Guy Fawkes. His family tree is show below.”

There is a drawing of a tree below it and to the left a drawing of a man with a bowl around his neck beneath the title: "Have You got Dandruff? Well, get a basin (basin) fitted on your head, it will stop the noise of the dandruff making you go deaf as it talk(s)." 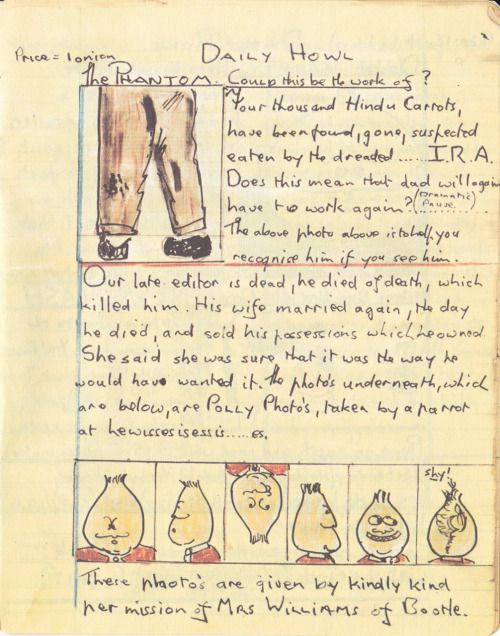 Our late editor is dead, he died of death, which killed him. John had actually sat for Polyfoto's at Lewis's Department Store in December 1946: 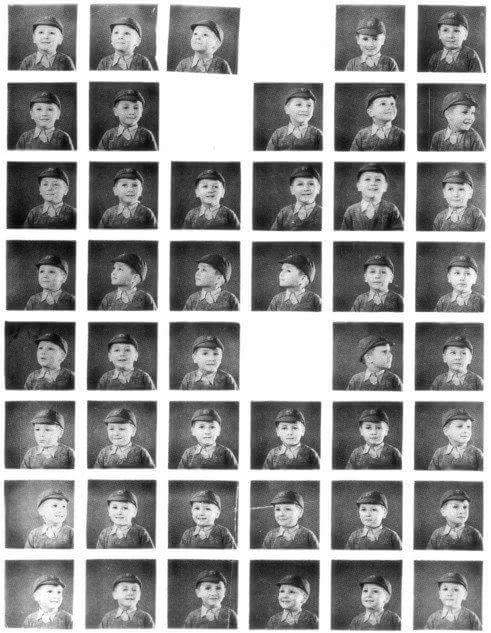 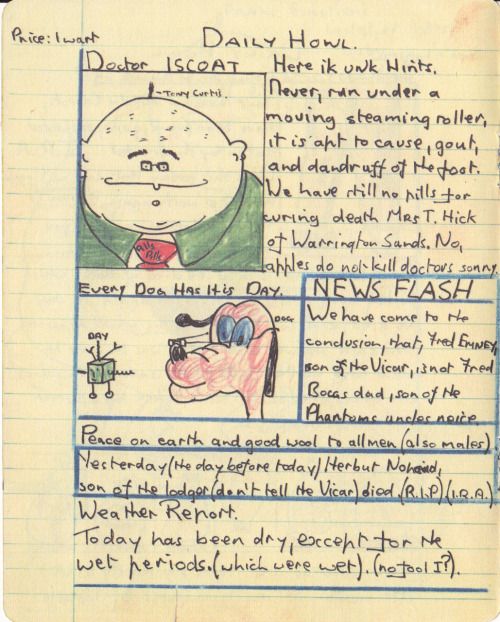 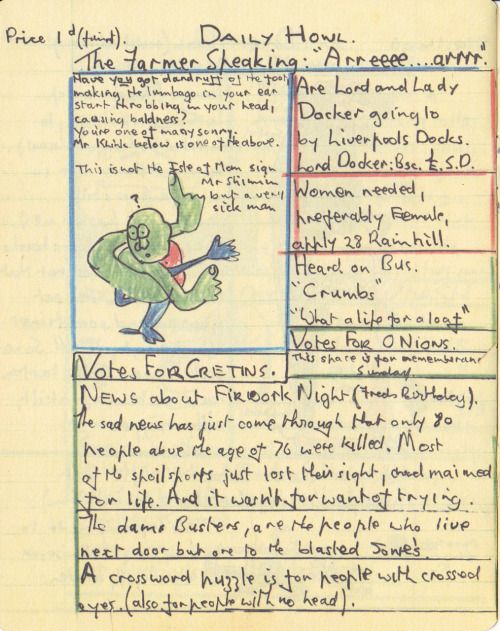 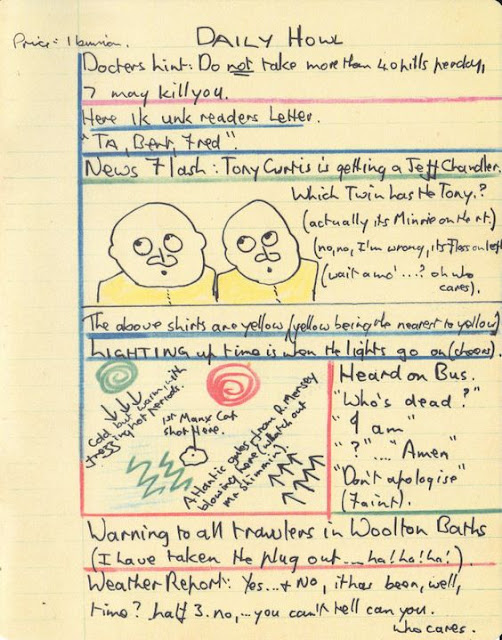 The Daily Howl is peppered with local references such as this:
Warning to all trawlers in Woolton Baths (I have taken the plug out...ha!ha!ha!) 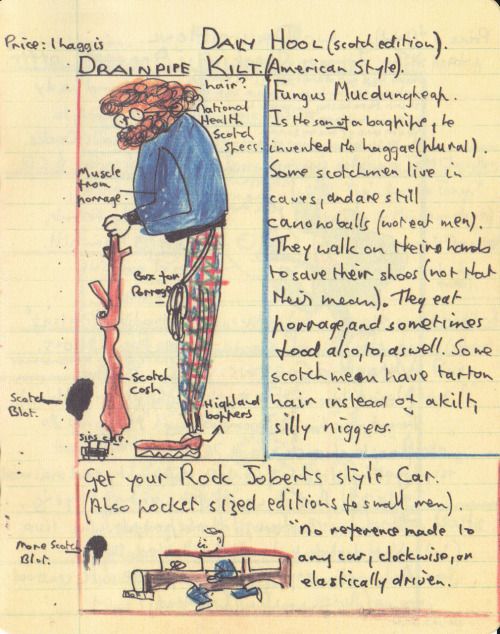 When Bill began publishing his own newspaper,  Mersey Beat he was the recipient of some extracts from the Daily Howl: A pupil from (Quarry Bank) tore out two of the poems and gave them to me and I published them, having obtained permission from John to publish any of his works he could trace. The poems were ‘The Tales Of Hermit Fred’ and ‘The Land Of The Lunapots’. 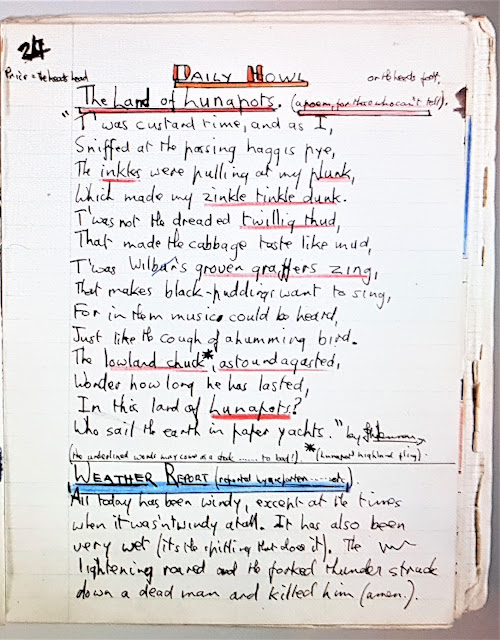 A further, seemingly complete copy of the Daily Howl, was in the possession of an art school friend of John and Stuart, Rod Murray, with whom he’d shared a flat in Gambier Terrace. John left the book behind and Rod said he'd return it if he were reimbursed for the back rent which John had owed him. Rod eventually auctioned his copy off at Sotheby’s and I suspect this is the copy now on display in ‘Double Fantasy’.

Thank you Yoko for buying it and sharing it once again with another generation of Liverpudlians. 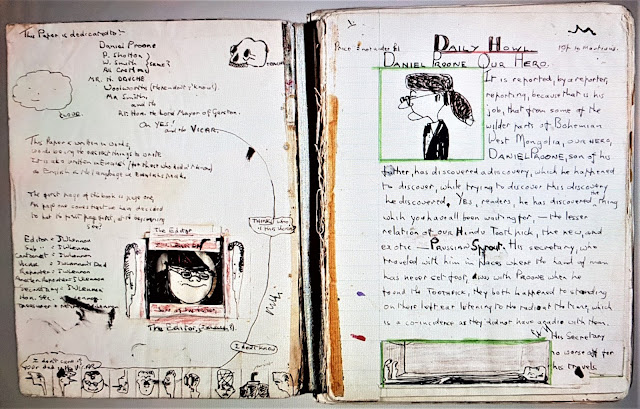 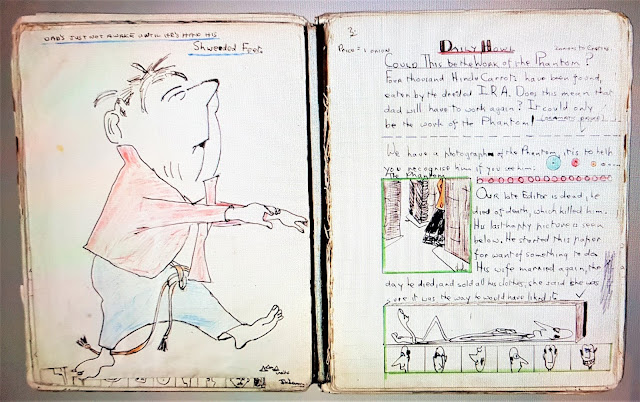 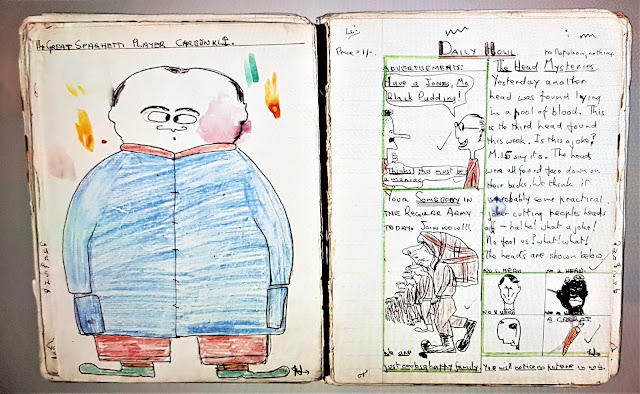 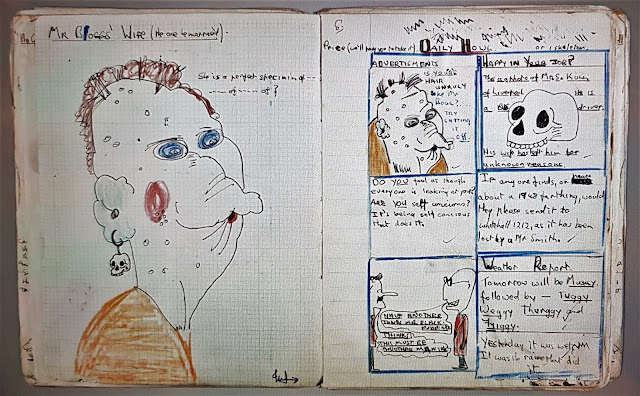 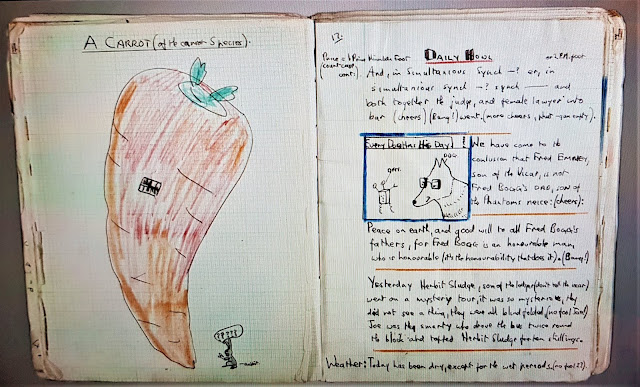 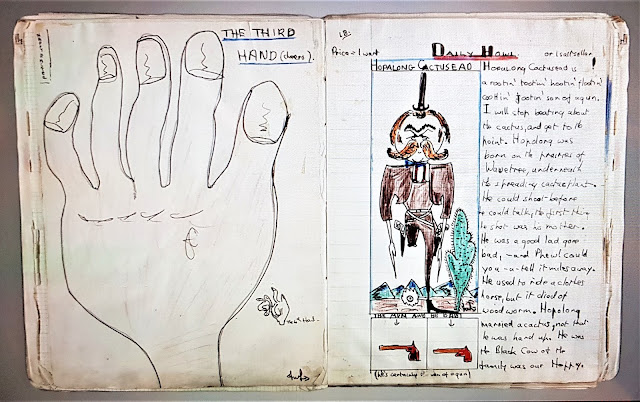 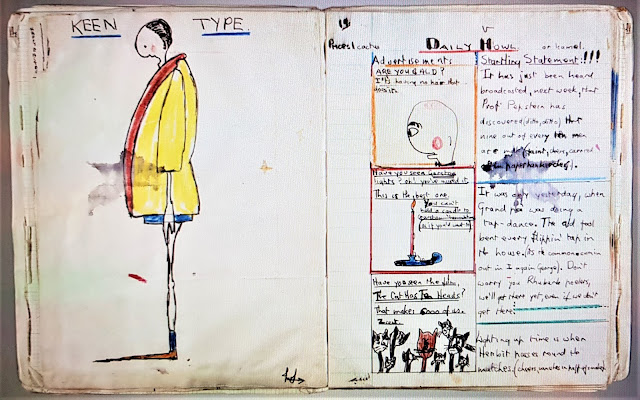 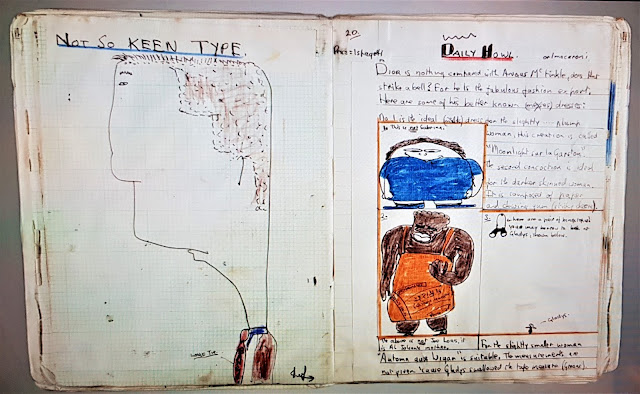 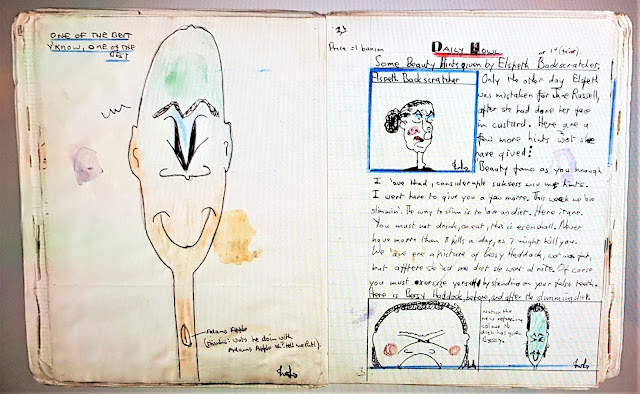 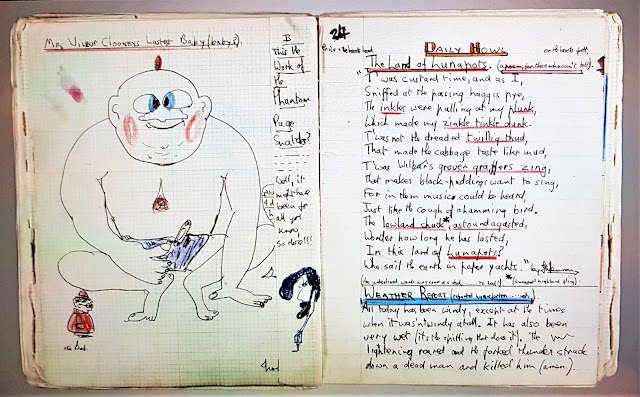 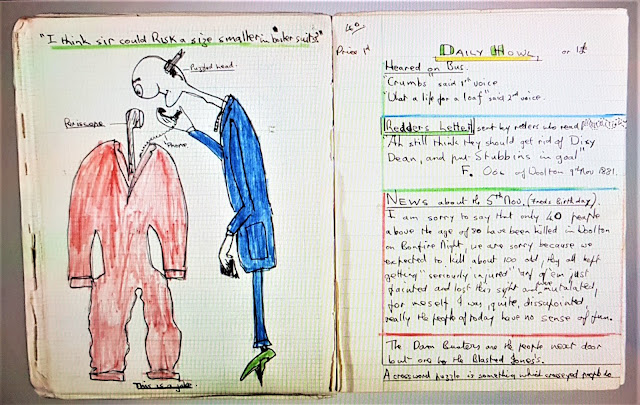 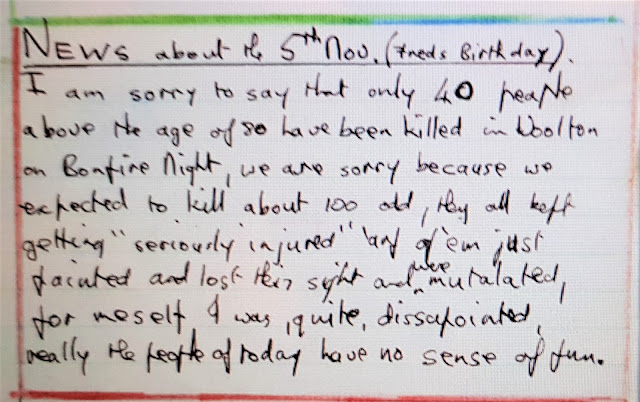 Another Woolton reference: In Pete Shotton's book John Lennon In My Life he recalls them setting fire to the bonfire that had been erected on the 'tip' - the waste ground on Menlove Avenue - a day early, November 4th, much to the annoyance of the neighbours who had taken the time to collect the wood and build it.  John and his cronies watched it burn from the safe distance of the golf course on the opposite side of the road. I wonder if this Daily Howl entry is a reference to that?

And for a finale, this is what made me laugh the loudest:

There's also this piece circulating on line, John's illustrated take on The Walrus and the Carpenter by Lewis Carroll, who, as with the Goons was a major influence on John's writing. I'm not sure if this is from a copy of the Daily Howl or a stand alone piece - another work 'Cowboys and Indians' is on display in the exhibition. 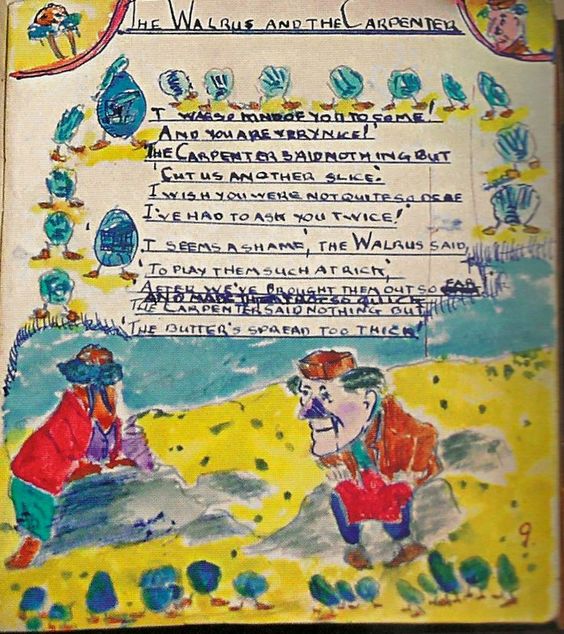