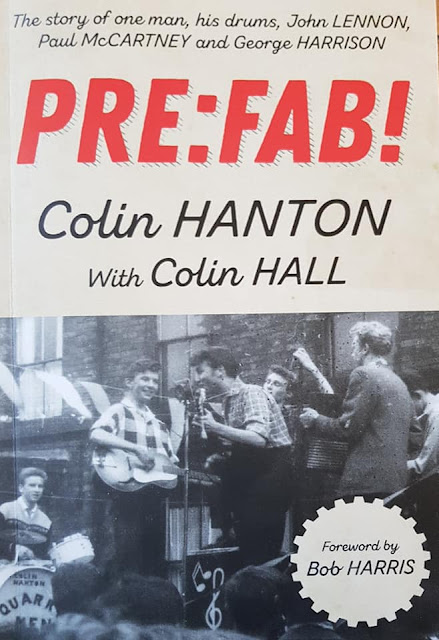 Unfortunately I was too late for the actual book signing though I did manage to buy the remaining signed copy.  Nor did I catch the authors in person (they'd called it a day shortly before I arrived, I expect so they could get home and watch the England game) but I'm sure our paths will cross soon, by which time I should hopefully have finished the book and be in a position to ask them about it.

As I say, I've nowhere near finished the book yet but I can confirm that my first impressions are that it's well written and, just as importantly it's accurate. For a gentleman nearing his 80th birthday Colin Hanton's memory is great  while Colin Hall, the National Trust's custodian of  John Lennon's former home 'Mendips',  does a fine job of placing these recollections in the appropriate chronological order.

It also passes the test I apply to any new Beatle publication that appears. Put simply, I open the book at random and look for errors. If I find some in such an arbitrary way I can usually guarantee that there will be more. I'm also prone to check any photograph captions to see if the given date and location is correct.

I'm pleased to say I've found no such issues wiith Pre:Fab! which is a great relief as I've been looking forward to it since meeting with Colin in February this year at the Penny Lane Development Trust. 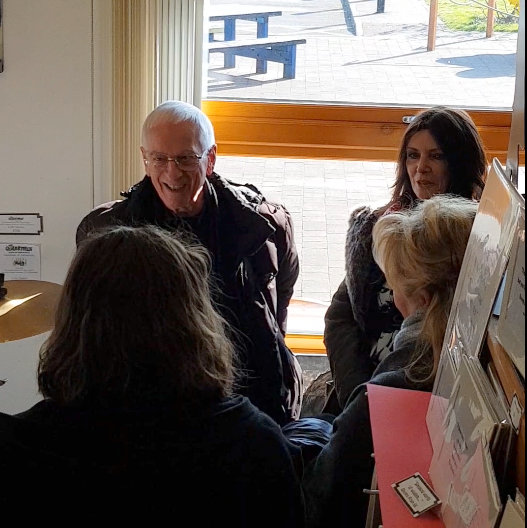 I was on Jackie Spencer's  'George Harrison 75th Birthday Tour' and she had arranged for Colin to meet us there and share his memories of how George came to join the Quarry Men. During the meeting Colin confirmed the date he expected his book to be published and was kind enough to give us preview of some of the stories it contains (on the condition that we bought the book when it came out!) 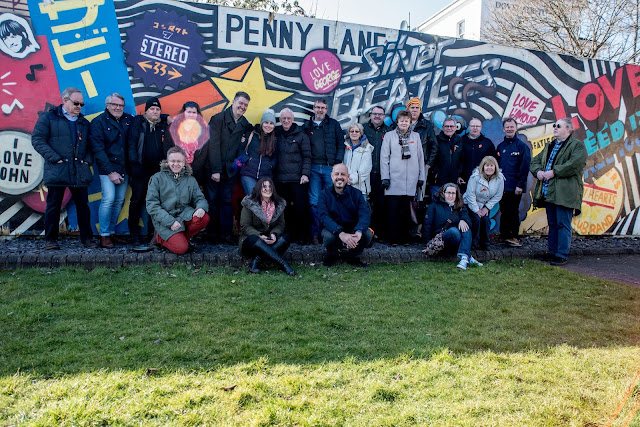 I'll do a full review when I finish it. In the meantime here's a promotional interview with Colin by Grace Macaskill which appeared in the Daily Mirror on 23 June 2018: 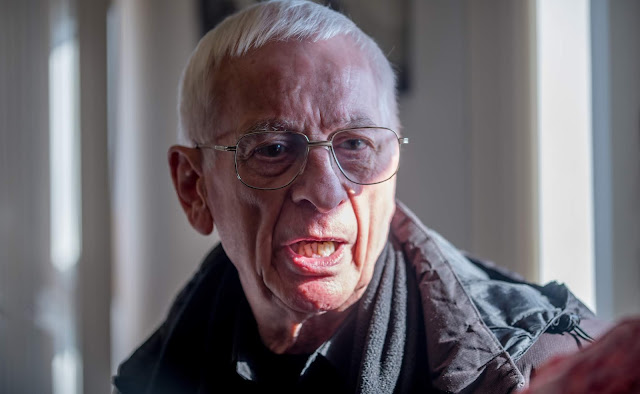 Loads of Beatles fans trundle along Penny Lane and get a wave from the man who played drums with John, Paul and George.

They wave back – blissfully unaware the Liverpool pensioner they have just encountered could have been a really big Starr.

This isn’t Ringo, the fourth member of the legendary band. It’s Colin... Colin Hanton – the man who turned his back on the group after a bust-up at a gig.

He is 79, lives just a few long and winding roads from Penny Lane and says of greeting the daytrippers: “To them I’m just a grey-haired old bloke on his way to get the morning paper – but they’ll give me a wave back.”

Colin left the Beatles – then called the Quarry Men – after a fallout with George Harrison, John Lennon and Paul McCartney.

Three years later they struck gold with Love Me Do, and Ringo was on the drums.

But there’s no bitterness from Colin, who says: “I was at a different stage of my life from the others. At 18, I was the oldest.

“I had an apprenticeship as an upholsterer and that meant something in post-war ­Liverpool. I also had a steady girlfriend who went on to become my wife.

“To be honest, I don’t understand why everyone makes such a big fuss of me being part of it all. We were just young lads having fun and I went along with the ride.”

And when the band stopped being fun Colin ripped up his ticket to ride – literally.

It was January 1959 and he stomped off a bus after he and his band-mates fluffed a gig in front of a talent spotter.

He goes on: “I don’t think I could have coped with all the fame. Paul McCartney was in Liverpool the other week and he couldn’t go anywhere without being spotted.  It was ‘Paul is doing this, Paul is doing that. Paul has stopped off for the toilet’. I couldn’t have coped with that level of attention.” (Note: Colin is referring to Paul's visit with James Corden, see my earlier blog).

But Colin has enjoyed fame on a quieter level as a member of the original Quarry Men, the band Lennon formed in 1956 and which morphed into the Beatles.

Until recently Colin and fellow former Quarry Men Rod Davis, 77, and Len Garry, 76, were still playing gigs around the world.

Colin was first asked to join in 1956 “because I was one of the few people around with a drum kit”.

He borrowed £34 to buy it and was still paying it off when McCartney joined in October 1957 and Harrison came on board in early 1958.

Britain was enjoying skiffle, a kind of folk music with blues or jazz influences. But the landscape was changing with the arrival of Bill Haley’s Rock Around the Clock and Elvis Presley’s Hound Dog. And Colin was keen to get in on the act. In vain, his parents warned him to “stay away from that Lennon lad” – considered to be a difficult pupil who “fancied himself as a bit of a teddy boy”.

Life as an early Quarry man was far removed from the grandeur and adulation that the Beatles would enjoy.

Colin recalls: “We’d get the bus everywhere. I’d stick my drum kit downstairs and we’d all go upstairs for a smoke. I was the oldest and the only one who could drink.

There was no chance of the other lads getting hold of alcohol either because the only pint you could get was in a pub or at an off-licence attached to it.” And he laughs: “The only drugs that were around the scene were aspirin!”

He tells how the band “entered every talent contest around”. They were spotted by promoter Charlie McBain, who fixed up gigs around Liverpool throughout most of 1957.

Colin says: “We got 10 shillings – 50 pence – for each gig so it wasn’t big money and I was the only one in the band earning anything at that time as an apprentice upholsterer.

“But we were having fun and lots of it. We didn’t take ourselves that seriously. 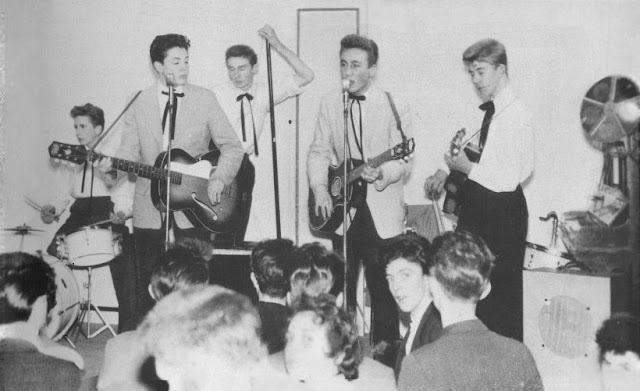 “Paul changed us, smartened us up. Before Paul, we just wore what we wanted. But before long he and John were wearing white jackets, white shirts and black ties. John went with the flow but I knew Paul was going somewhere. He was diplomatic, more cautious. Paul was a big influence and everything he did was carefully thought out. Without him, the Beatles might not have made it.”

As older members of the Quarry Men drifted away to “get on with their daily lives”, Colin played drums on the first single that John, Paul and George ever recorded – their version of Buddy Holly’s That’ll Be The Day.

But in 1959, Colin quit over a boozy gig. He explains: “The owner of the Pavilion Theatre in Liverpool had come to check us out but nobody had told me he was coming.

“The first half went brilliantly. But during the break we had a pint and one pint led to two...

“I was dancing on the tables. Me, Paul and John staggered back on stage as three drunks. Only George was sober – he was too young to drink. Things didn’t go well. I’d no idea we were being scouted and I saw it as a lost opportunity. It erupted into a row in the club which carried on when we got the bus home. And that was that. The end of me and the Quarry Men.”

Colin went on to marry his teenage sweetheart Joan and they had two daughters. He also ran his own business as an upholsterer. He adds: “Dad was keen on me finishing my apprenticeship. That was everything. I had no regrets when I left the Quarry Men.”

The Quarry Men reunited in 1997 – initially to raise cash to restore St Peter’s Church in Woolton, where Lennon first met McCartney while playing at a garden fete. And while McCartney is now worth an estimated £904million, his former bandmate is philosophical about the hand he’s been dealt.

“I have lived a lovely life with Joan and we had two fantastic daughters. Life couldn’t have been better. I don’t mind if those tourists coming to Penny Lane don’t know who I am.”

But he adds wistfully: “Of course I wouldn’t have left the band if I knew what was to come...” 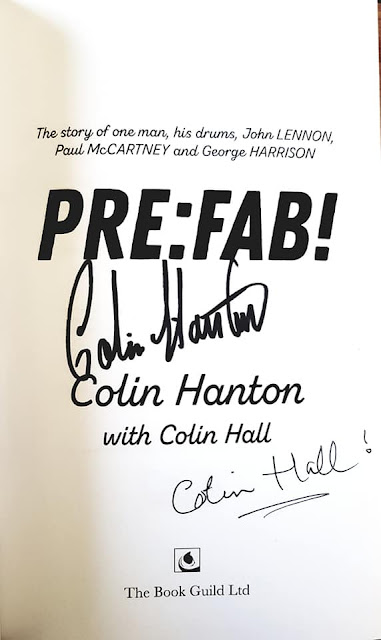