A look inside the birthplace of Ringo Starr.... 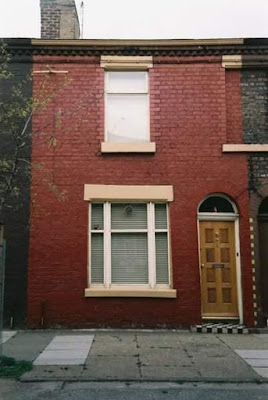 Situated off High Park Street in Liverpool 8 are the 'Welsh Streets', an area of around 450 dilapidated Victorian terraced houses constructed by Welsh builders in the late 19th century for immigrants seeking work and housing from Wales. They were named after the towns, villages and valleys from where the workers originated.

Among them is Madryn Street, where Ringo Starr was born in July 1940.

For years there have been plans to demolish the 'Welsh Streets' and regenerate the area.

The fight to save the houses from demolition began in 2004. It's been a long, slow process.

When Beatles fans realised that plans to regenerate the area included the destruction of Ringo's birthplace they accused the council of cultural vandalism bordering on the criminal. It's not the only time the council have had to face this accusation as bit by bit, time and again, parts of Liverpool's heritage is sold off and destroyed in the name of progress.

While a 2010 article in the Telegraph likening the demolition proposals as the equivalent of knocking down William Shakespeare's home was probably going a tiny bit overboard, it's fair to say that Madryn Street has become a vital part of any fan's pilgrimage to the Beatles' home city and attracts thousands of visitors each year. Every time I've been in the area I've witnessed taxis full of tourists arriving to take photographs. Those involved in Liverpool's taxi tourist industry make multiple visits to this neglected area of the city on a daily basis. 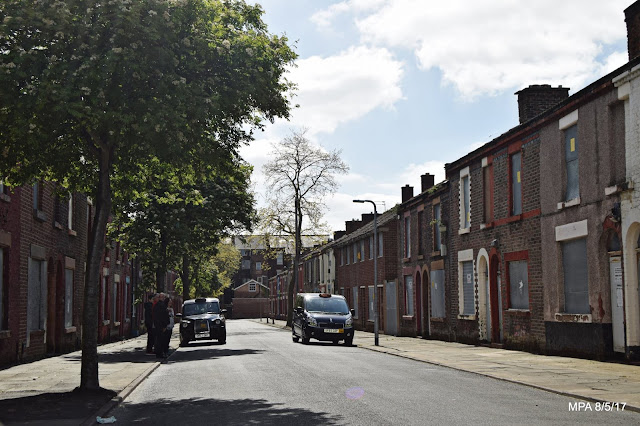 At one point, in acknowledgement of the historical interest in number 9 and in an attempt to appease sentimental Beatles fans the council reportedly drew up plans to dismantle the house brick by brick and rebuild it at Liverpool’s Museum of Life on the Pier Head.

That option was quite resolutely dismissed by Beatles’ fans who regard such a suggestion as a gross insult to one of Liverpool’s most famous sons.

The Telegraph was quoting Phillip Coppell, Beatles' tour guide who said: If the council in Stratford wanted to knock down Shakespeare's birthplace and move it to the NEC there would be outrage. The only difference between the two is that Shakespeare has a four hundred year head-start on the Beatles.”

And of course Shakespeare didn't have any hit records.

Asked to comment, Ringo expressed dismay at plans to knock down his childhood home and said he was opposed to the plan to relocate it to the museum.

If you want to see where I come from, it's no good putting me in the Wirral. It only works, as far as I can see, if it's there (in Madryn Street)(2007)

If you want to see Ringo's birthplace, you really need to see it in the place where he was born.

While the childhood homes of John Lennon and Paul McCartney are now owned by the National Trust their spokesman claimed in 2012 that Ringo’s birthplace did not merit saving for the nation because the former Beatles drummer only lived there for three months.

He actually lived there for over 4 years but hey what’s a few months?

In 2010 English Heritage refused to grant Starr’s birthplace listed building status on the grounds that the drummer only lived there for a very short time, it had no associations with the Beatles’ success and was not architecturally or historically significant enough.

However, Jonathan Brown, from SAVE Britain’s Heritage, said: To paraphrase John Lennon talking about Ringo, this isn’t the best house in the world. It’s not even the best house in Liverpool, but it does draw thousands of tourists from all around the world, and you’ve got to wonder how little they must think Liverpool values The Beatles to let these houses be run down in this way.

Brown was actually mis-quoting the comedian Jasper Carrot. You’ve got to wonder how little Brown thinks of John Lennon by attributing comments to him in this way, but I take his point.

In June 2012 Liverpool City Council agreed to release 32 of the pre- 1919 houses from demolition, including Ringo’s but intended to clear 287 with a further 100 to follow in the long term. They argued that the majority of the houses were beyond repair.

Opinion among local residents was divided. Whilst some were tired of living in sight of the boarded up, abandoned Welsh Streets and longed for the regeneration plans to get underway others feared their community would be torn apart and said the homes were perfect for young people and families stepping on to the property ladder.

Nina Edge, of the Welsh Streets residents group, said they were looking forward to seeing the detail of the plans but expressed concern that the surviving terrace will look at odds surrounded by new homes: Half the people wanted the houses to stay and half wanted demolition so we argued that a significant number of houses should remain as a "Victorian quarter" while the rest of the land is redeveloped.

What we have today is the council doing the bare minimum to save face because Ringo's house has caught the public's imagination.

I wonder if these 16 houses will sit comfortably in their new surroundings and I fear it will look ridiculous.

The plans ultimately fell through in January 2015. Following a public enquiry came the shock announcement that the Secretary of State for Communities had decided to block the planning application to replace the existing properties with new homes. With few alternate options, refurbishment was subsequently deemed viable with Liverpool Council agreeing a partnership with Placefirst who had experience in renewing derelict properties. 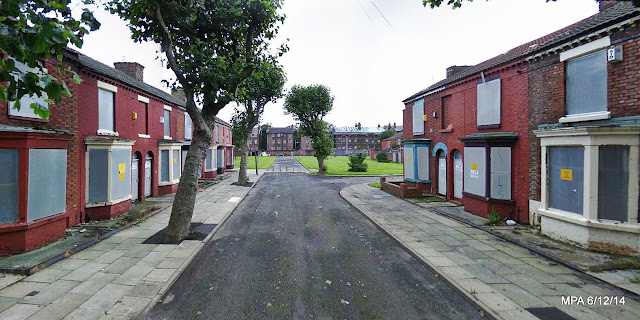 A pilot scheme in 2017 involved the refurbishment of houses in Voelas Street to demonstrate how the houses could be remodelled and to determine public opinion and uptake. Upon launching the scheme to prospective tenants, all properties were taken within the first weekend, and the residents moved in around September 2017. A year on the developers can't get them finished quickly enough, such is the demand. 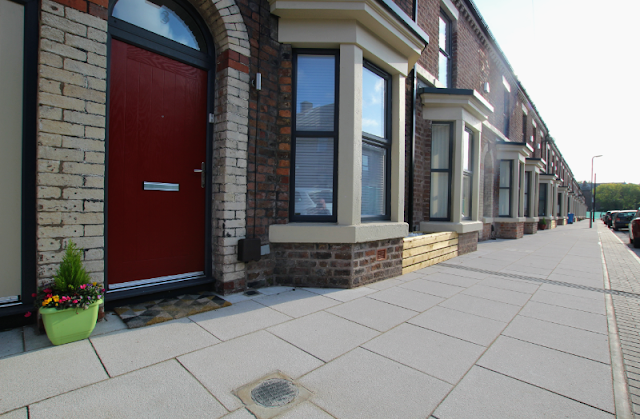 The renovations involve remodelling some floorplans and in some cases knocking through to adjacent homes to create larger houses, whilst retaining some of the original houses in order to cater for various residential requirements.

We’ve retained all the lovely period features, like high ceilings and big windows. But we’ve made the downstairs open and free-flowing, with doors opening out onto rear terraces – perfect for relaxing and dining outdoors. Every home has spacious reception rooms with many having en suite bathrooms, and some a downstairs loo too.

We’ve also cleverly converted the old rear alleyways into shared gardens running the entire length of the street. A great place for children to play safely, and for neighbours to make friends. (Placefirst brochure) 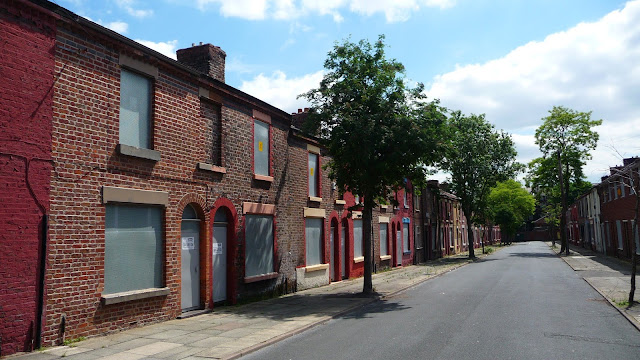 A photo taken during one of my visits, circa 2013. Ringo's birthplace is closest to camera.

The renovation has now reached Madryn Street. The following photographs were all taken today, 11 October 2018. 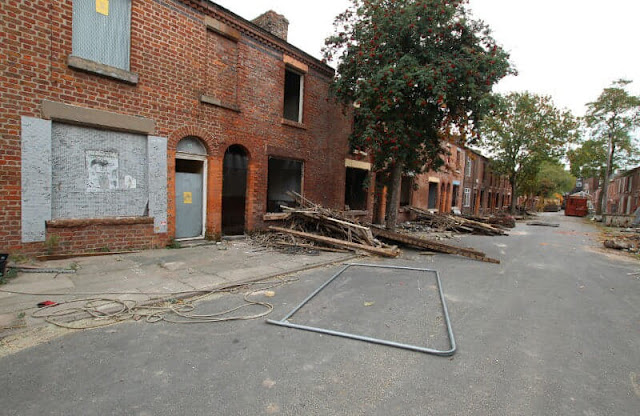 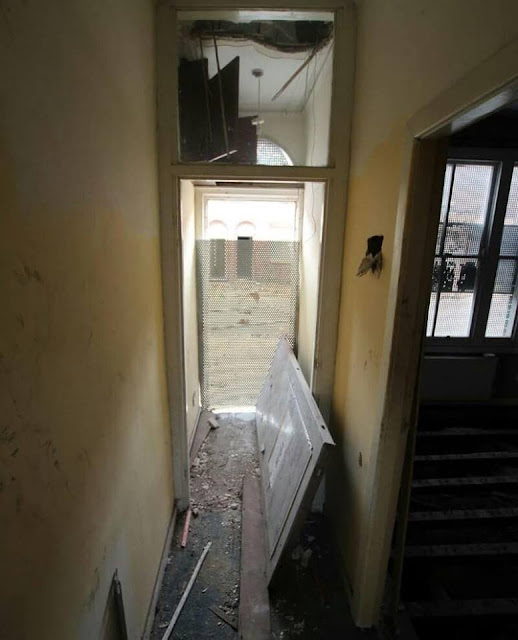 The view towards the still 'tinned up' front door from the foot of the stairs. 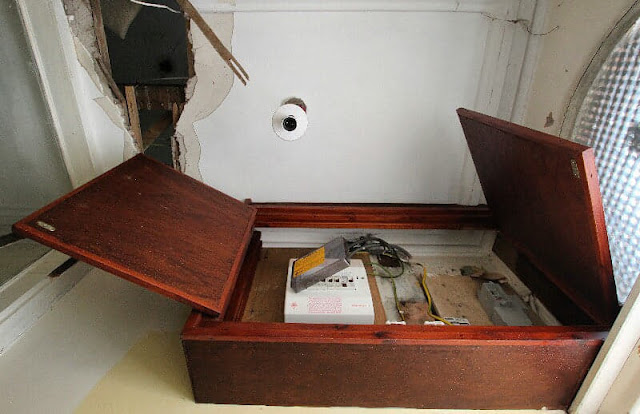 A view taken in the small porch area by the front door looking straight up past the fuse box. Note the hole in the ceiling. 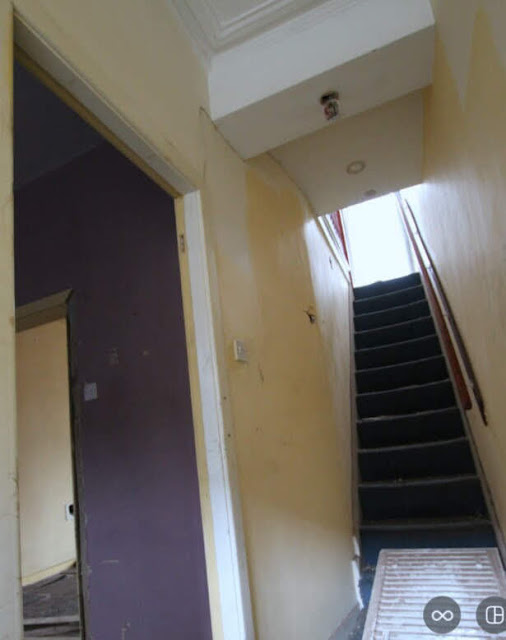 Looking up the stairs.

When young Richy Starkey lived here the house had three bedrooms but no bathroom. 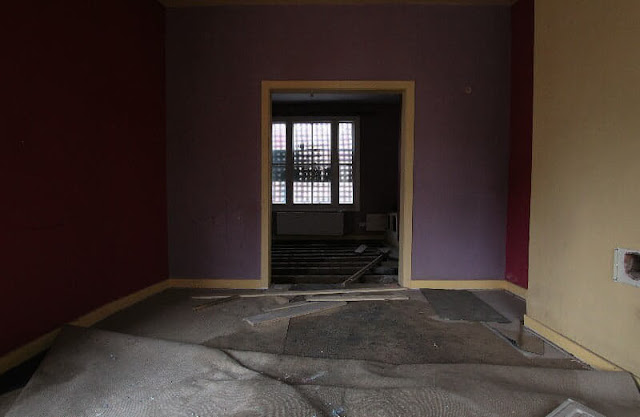 Looking towards the front room from the back. 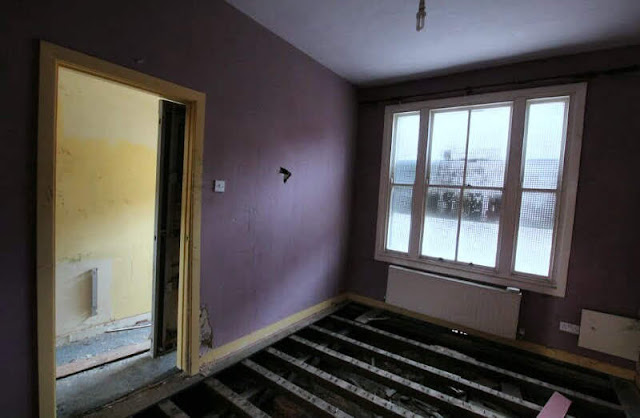 The front room looking out onto Madryn Street, with the hall on the left. The photo below gives you more of an idea of the size of the front room. 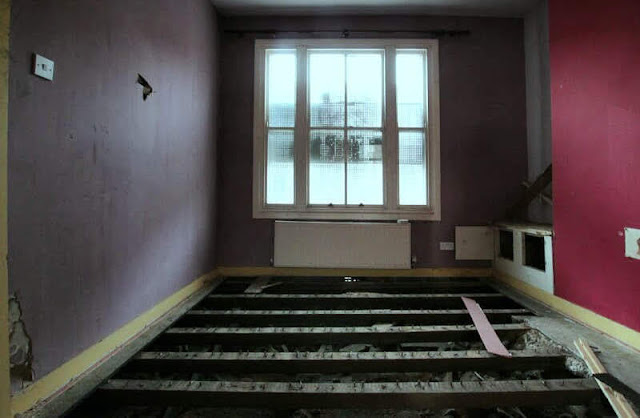 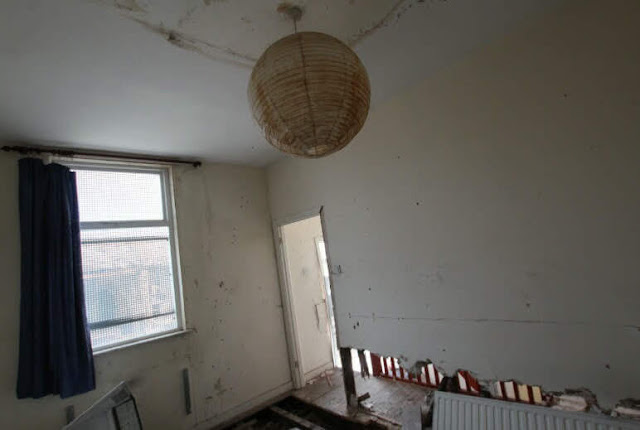 One of the front bedrooms. Note the plasterboard wall is destroyed revealing the stairs' banisters. 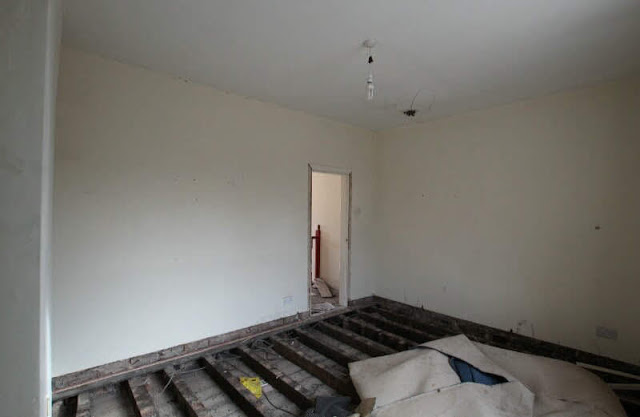 Two views of the second bedroom. 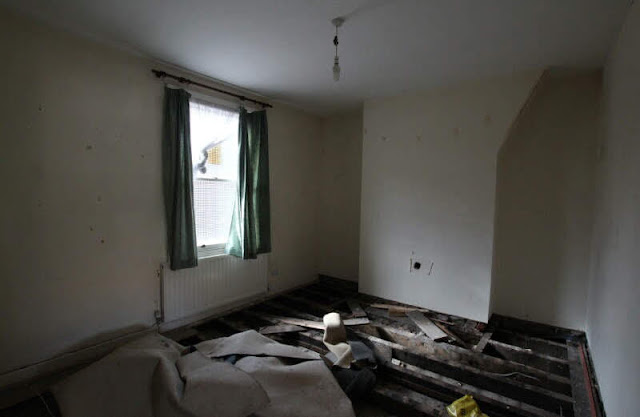 Now you might be thinking, where are the photos of the third bedroom? Where's the bathroom that was added after Ringo and his Mother moved out? Where's the kitchen?

Well, to create the self contained play areas and spacious terraces it was necessary to demolish the existing alleyways behind the houses - known in Liverpool as a 'back jigger' or 'back entry'. The photo below shows the alleyway behind the houses facing Ringo's on Madryn Street. This is their original width..... 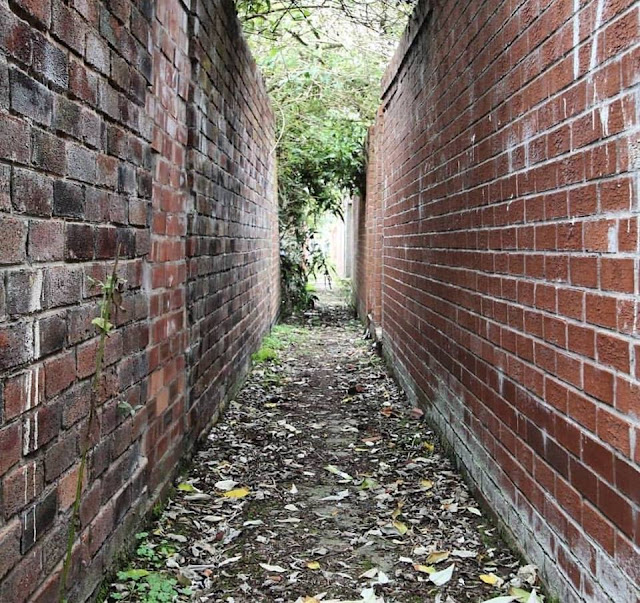 ...while the photo below shows just how much additional room has been created by removing the back extensions on the houses and demolishing the alley walls. None of the house's on Richy's side presently have a back to them. 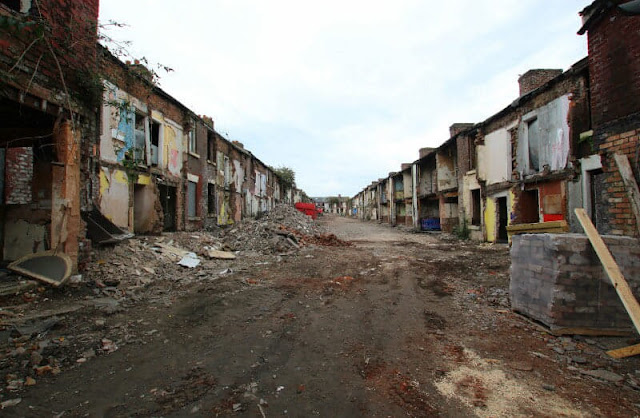 Eventually the rear of the Madryn Street houses will look like the above. After rendering the groundwork will be landscaped. 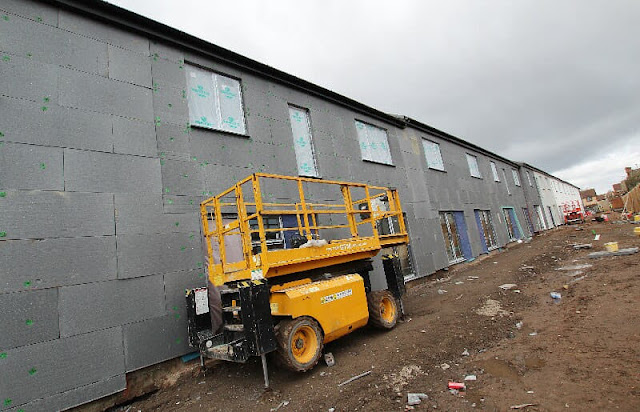 As No. 9 Madryn Street is still tinned up, access had to be gained via the open back.
There were no such problems entering No. 10. This was the home of Annie Maguire and her  family where young Richy often went when he needed babysitting. Annie's daughter Marie even taught him how to read here. 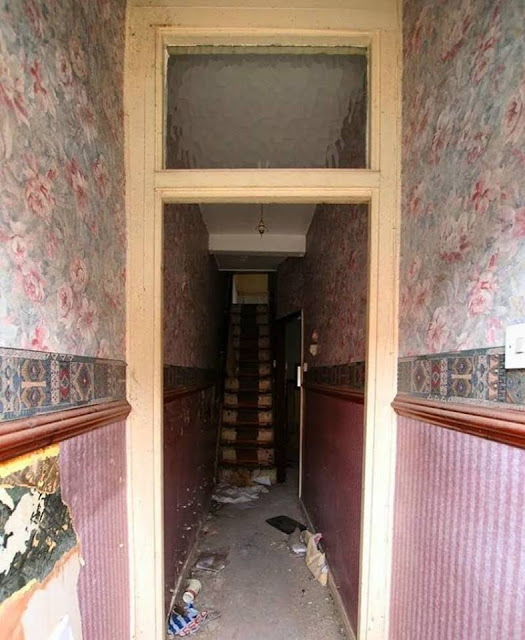 Number 9 Madryn Street looks set to be a tourist Bed and Breakfast.

You may have heard about it here first!