Over the years it has often been said that politicians and town planners have been responsible for destroying more of Liverpool’s buildings and open spaces than the Luftwaffe achieved during the Blitz.

Certainly the total destruction of the network of Georgian streets around the area containing Queens Square, Williamson Square, and St. John’s Market area was one of Liverpool’s most significant architectural post-war losses.  There were dozens of small businesses, shops and pubs in the streets surrounding the thriving St John’s market which remarkably survived the Blitz relatively unscathed. Instead they were lost in the mid 1960s to accommodate the building of the soulless St John’s Precinct. Today only the Playhouse and Royal Court Theatres survive. 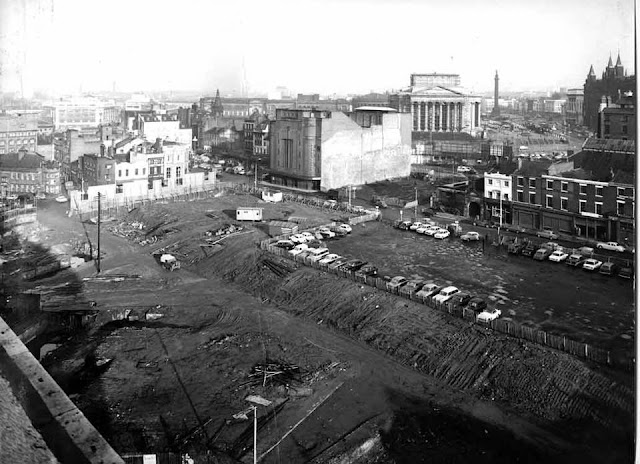 The Royal Court is pictured top centre in the above photo with Lime Street at top right. 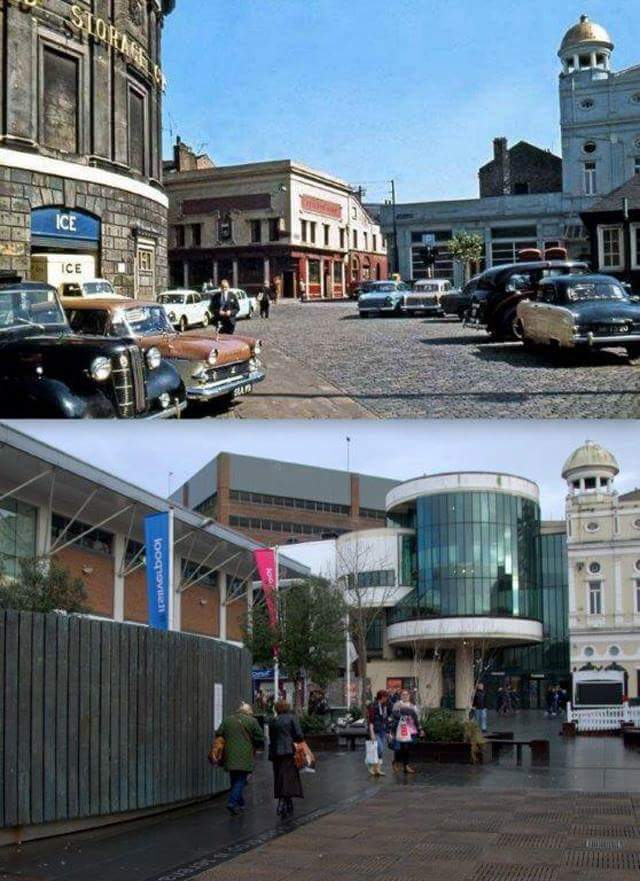 A photo from the always excellent Facebook page Liverpool:Then and Now by Keith Jones. Photographed from Williamson Square, the Old Royal pub at the start of Brythen Street is visible to the left of the Playhouse Theatre in the early 1960s photo. 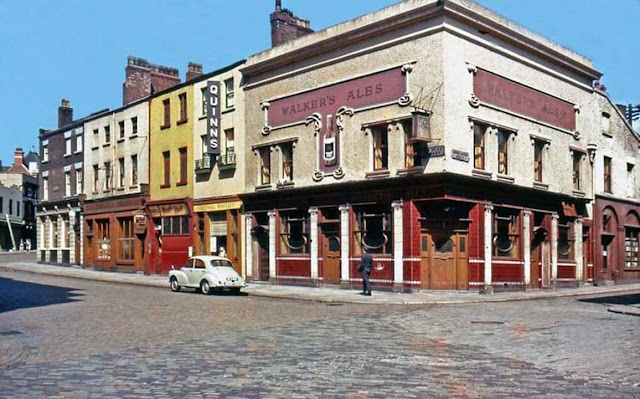 One casualty of the 1960s remodelling was Brythen Street which ran off Williamson Square towards the Royal Court. 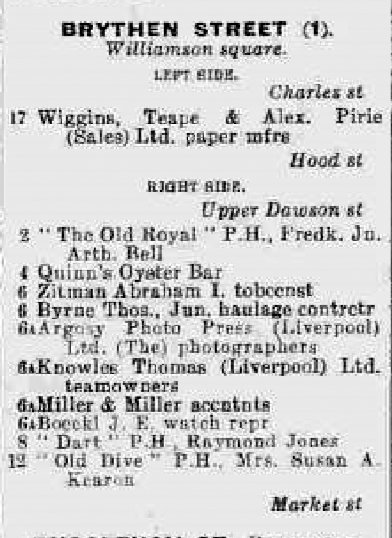 Alongside The Old Royal, Quinns Oyster bar, Roberts (bird dealers - not listed in the 1955 directory, right), Zitman’s (tobacconists) and The Dart was the Old Dive.

A ‘nice old pub, a perfect spot to break off from Saturday shopping for a sit down, a smoke and a pint of Higsons’ bitter.’ (Ross – Streets of Liverpool 18/11/01).

With three out of the five buildings on this small block being public houses it must have been something of a pub crawlers' dream!

Midway between the Royal Court and Playhouse Theatre, the Old Dive was often frequented by stars of the shows. Ken Dodd, Morecambe and Wise, Beryl Reid, Billy Matchett and dozens more never missed calling in when they were in town.

The Old Dive pub (centre). To the left of the Old Dive is a rare view of Market Street showing the opposite end of John Foster’s St. John’s Market to the one normally photographed on Elliot Street. This is a reverse view of the block shown in the previous photograph. Note the Playhouse Theatre on the extreme right. The photo below was taken 10 years later. 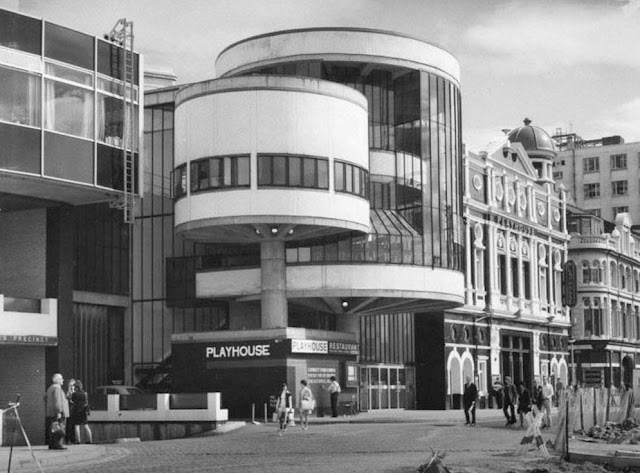 The Beatles generally stayed in town between lunchtime and evening sessions at the Cavern and as the ‘Dive was only a short walk from Mathew Street across Williamson Square they often drank there, a handy retreat where they could waste a few hours. Being skint, each would buy his own drink because none of them could afford to pay for a round. On occasion they would pull the old trick of ordering a single beer between them and then use it as an excuse to sit in the warm for hours on end. 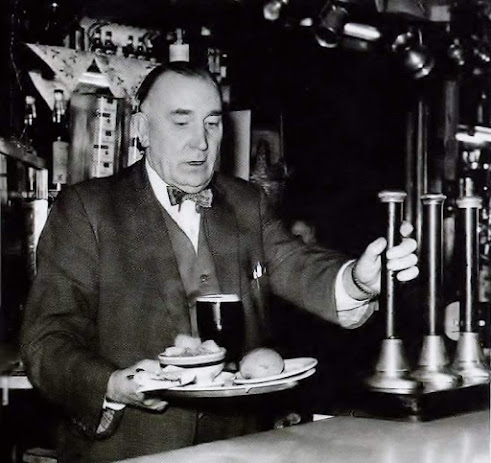 This would not escape the attention of the landlord Danny English (left). In an interview he later gave to Hunter Davies for the Beatles’ authorised biography he recounted a time when, having watched the Beatles sit there for most of the afternoon without approaching the bar he advised them that it was time they stood the barmaid a drink.

Another of Danny’s customers was the Liverpool Echo’s journalist George Harrison who met with the Beatles at the Old Dive in January 1962.  Brian Epstein had only just taken over as manager and was trying to get the Beatles some local press coverage. English offered to put him in contact with Harrison.

The meeting was a failure, the journalist later opining that ‘the Beatles lacked conventional manners and didn’t buy drinks.’ As Brian Esptein admitted in his 1964 ghost written biography A Cellar Full of Noise ‘I don’t think he liked them very much.’ No piece appeared and the Beatles failed to get themselves mentioned in their own city’s evening newspaper.

As the Beatles got to know their new manager so they also became acquainted with his circle of friends, one of whom was Terry Doran, a flamboyant car salesman who drank with them here.  Paul McCartney would later remember the Beatles drinking with Epstein and Doran in the ‘Dive one night when an argument broke out over whose packet of cigarettes was on the table.

There really was a time when the Beatles were that poor. 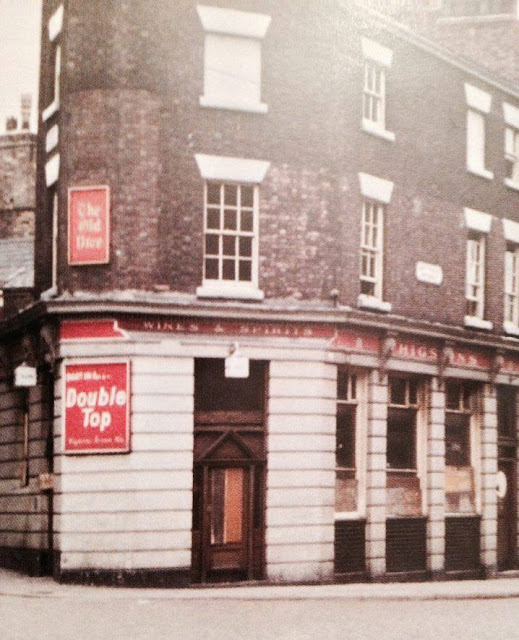 During the summer of 1962 the Old Dive was the setting for several clandestine meetings between Brian Epstein, his associates and the Beatles in the weeks leading up to the sacking of drummer Pete Best.

One notable occasion was on 15 August 1962. The Cavern DJ Bob Wooler remembers:

'It was terrible. I was there at the Cavern, and I didn't know that was going to be his (Pete’s) last drumming appearance with them. Brian said would I please stay behind at a pub, a late pub they went to because they wanted to talk to me about something. And I said okay. I finished the session about 11:30, I went along to this pub and knocked three times and was admitted in one of the back rooms.

"There was Brian and a couple of Beatles (Note: one was definitely George), and they announced that Pete Best was going.  And I blew my top. I was most indignant - I said 'Why? Why? Why are you doing this?'  Because he had been with the Beatles for two years. And you don't carry a passenger for two years.  He didn’t step out of line, he was not awkward.

'Because,' they said, 'he wasn't such a brilliant drummer.' And I said, 'If he wasn't a brilliant drummer, it must've been apparent from the word go.' He went to Hamburg a couple of times with the Beatles and they did all these shows in Liverpool and now you want to give him the boot. I left them in no doubt as to how I felt. I know Brian felt lousy about it.'  (Goldmine, 8 November 1996 with Gillian G. Gaar; The Best of Fellas by Spencer Leigh; BBC Radio documentary The Beatles’ Story, broadcast 1972)

Whether he liked them or not, by 1964, the Echo’s George Harrison had no choice but to write about the Fab Four. No doubt the local newspaper were delighted when they discovered that they could exploit the fact that one of their journalists had the same name as a member of the group they had previously deemed not worthy of mentioning. Now they jumped fully on the bandwagon. Throughout 1964 they sent Harrison to cover the Beatles at every opportunity – the first trip to America in February, the summer world tour and the huge tour of America through August and September. 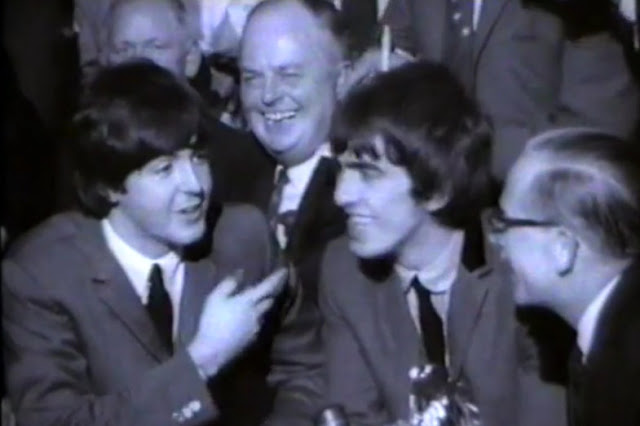 Before accompanying the Beatles on their tour of Australia in June the journalist was interviewed at the bar of the Old Dive by a television unit from Australian TV, talking about the early days of the group.

He recalled that the ‘Dive was one of the first places they rushed to when they received the first demonstration copy of their first record and got Danny English to play it on his record player so many times that it drove everyone nuts'.

During the Australian tour Harrison mentioned to the Beatles that the pub was due for demolition. Paul wrote out a big “‘R.I.P.” card and he, John, George and Ringo all wrote their own semi-suitable remarks on it and sent the card to Danny.

John Lennon scribbled 'Is my autograph still where I wrote it on your toilet wall?'.

When he saw the card Danny promptly went out to look. It wasn't. He later said 'If it had been, I'd have chipped the brick out and kept it.' 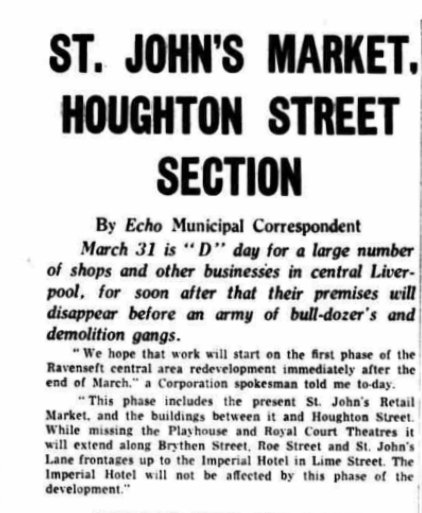 Demolition of Brythen Street actually began in May 1964.

Danny English retired from Licensing in 1970. 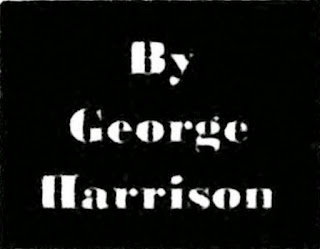 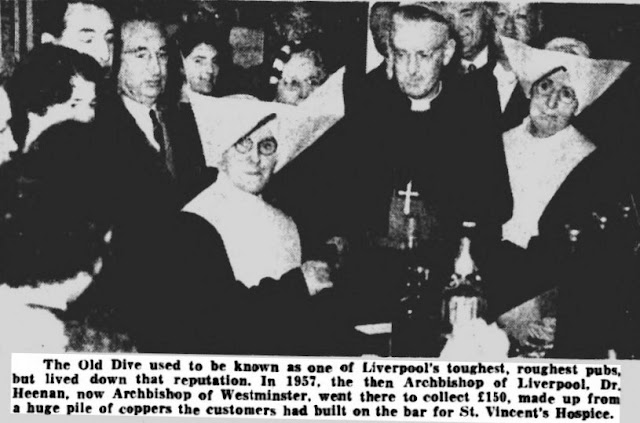