Squeaks instead of Notes

The English choral conductor, Ronald Woan, was born in Walton Liverpool on 27 August 1919. He began his early musical training when he joined his father in the local church. In 1931 he won a place in the Cathedral choir and a scholarship at the Liverpool Institute. 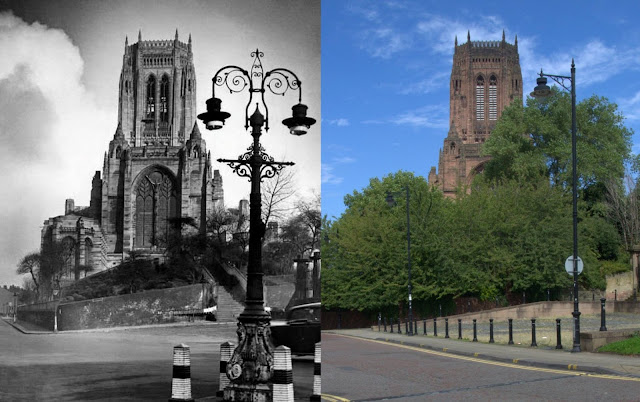 Liverpool's Anglican Cathedral, the fifth largest in the world, was built between 1904 and 1978 based on a design by Giles Gilbert Scott. The above photo shows it on 25 February 1952, and in 2016

After his studies, Woan became a Cathedral Chorister, singing under the direction of Edgar Robinson. When Ronald's voice broke, Robinson kept him on as music librarian, also giving him organ lessons. Soon making his mark as a church organist, Woan worked at Rushworth and Dreaper, the Liverpool firm of organ builders.

During the Second World War he served as a driver in the Royal Army Service Corps, and after being rescued off Dunkirk he saw action in North Africa and then survived shrapnel wounds and Malaria in Italy.

When Edgar Robinson retired in 1947, Frederick Dwelly, the first Dean of Liverpool, invited Woan to succeed him as Choirmaster. He duly took over as the Director of Music at Liverpool's Anglican Cathedral in September 1948 (including direction of the Liverpool Cathedral Choir).

He initially took the job on a temporary basis, but in the event he took charge of the choir for 34 years, while also teaching at Manor High School in Crosby (something he continued to do until his retirement in 1982). With his fellow former chorister and organist, Noel Rawsthorne, he built up a fine musical tradition. As well as the traditional choral repertoire, he added enthusiasms of his own – new anthems by Edwin Roxburgh, Peter Dickinson, Kenneth Leighton, and Rawsthorne, whose two settings of the Evening Canticles are dedicated to Woan.

As Liverpool had no choir school, the recruitment of choristers had always been a significant part of the Choirmaster’s role, and Ronald was able to attract choristers to sing here and encourage their talents. Despite being a strict disciplinarian, Woan nevertheless enjoyed the complete loyalty of those who sang for him, and continued to be a strong influence in them, years after their chorister days were over. Many of them remained life-long friends.

In 1953 he auditioned an 11-year-old Paul McCartney, but, unimpressed by the future Beatle’s rendition of Once In Royal David’s City, he turned him down.

Paul was one of 90 boys auditioned that year. 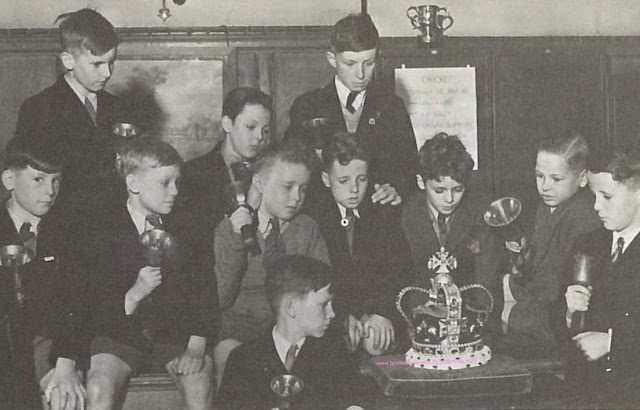 It was Jim McCartney’s idea that his son should audition. Despite mother Mary's strong Catholicism she raised no objections and so, in April 1953,  Paul dutifully lined up with several other boys waiting to audition for choirmaster Ronald Woan, who reviewed them one by one.

In 1991 Paul would claim in an interview for his self produced TV special ‘Ghosts of The Past’ that he failed the audition for the Cathedral choir because he 'didn’t have the piano – the musical knowledge. I tried to get in on singing alone.'

Woan disputes this. “Boys were generally accepted for the choir on the basis of what they could sing . He would have been required to sing a verse of Once In Royal David’s City. Beyond that it was a simple ear test – I played a note and asked the boy to sing it, and then another and on their ability to do these very simple things they were either accepted or rejected. He wouldn’t, at that stage, have been required to read music. If I had only accepted boys who could read music there wouldn’t have been any choir.

‘Squeaks instead of notes came from the young boy’s throat. His rosy apple cheeks flushed in the Chapter House of Liverpool Cathedral and four tiny companions – each being gravely addressed as ‘Mr’ – twitched more nervously at the audition for choirboys.' (Liverpool Echo, 17 April 1953)

It’s tempting to think the rosy cheeked squeaking school boy was Paul. Jim McCartney quickly realised that Paul flunked the audition on purpose by deliberately cracking his voice. He had made up his mind that he didn’t want to be a choir boy.

John Duff Lowe, occasional pianist with the Quarrymen failed his audition at the same time as Paul. He later retook it and passed but Paul didn’t bother.

Both Ronald Woan and Duff Lowe have both pointed out that but for Paul’s defiant action things might have worked out very differently. Being in the choir entailed certain obligations and commitments. For at least the next three years Paul would have been expected to spend the whole of every Saturday and Sunday and three evenings a week at the Cathedral. Boys would only leave the choir when their voice broke, at which point they automatically transferred into the adult Choristers’ Guild if they so desired.

Asked in 1988 about the rejection Woan said “If I had taken him on, he would probably have ended up teaching music in a comprehensive school. Under the circumstances he went on to do other things.

“I think he owes me an awful lot of money.” 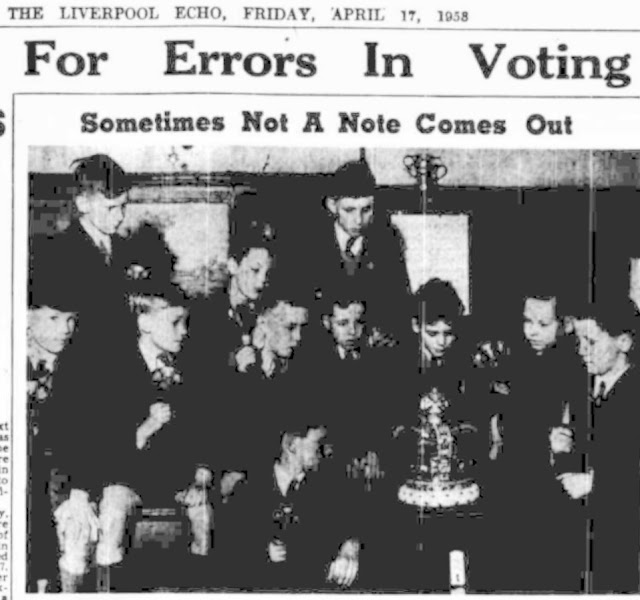 Remarkably, a photographer from the Liverpool Echo happened to be present in the choirboys library the day Paul and Duff auditioned. Both boys appeared in the resulting photo accompanying a piece headlined “Sometimes Not A Note Comes Out” published on Friday 17 April 1953.

The picture shows 11 of the twenty boys who went for that day's audition sampling the bells that they might one day ring, and admiring an actual size replica of the St. Edward’s Crown which would shortly to be used in the Queen’s Coronation.

It was Paul’s first appearance in a newspaper. 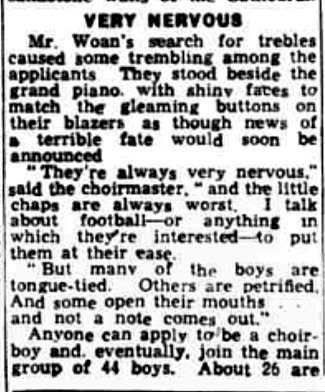 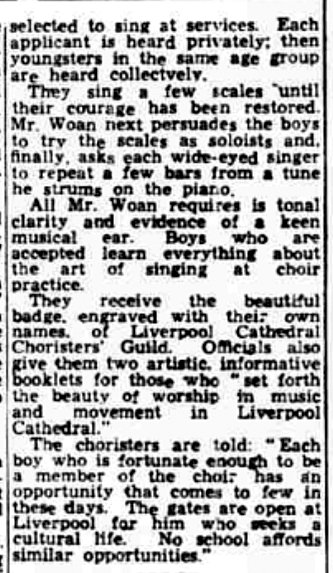 Woan’s quiet demeanour belied a dogged determination to achieve the highest standards. As Giles Gilbert Scott’s building expanded, so did the range of musical events and special services.

The first of the new bays was opened in April 1961, Woan taking charge as the Cathedral Singers, the Cathedral Choir plus the brass players of the Liverpool City Police Band all came together for a stirring rendition of William Walton’s Coronation Te Deum. The following year there was a full scale performance of Berlioz’s Grande Messe des Morts.

An advocate of the music of Benjamin Britten, Woan also conducted one of the early performance of Michael Tippett’s A Child of Our Time. 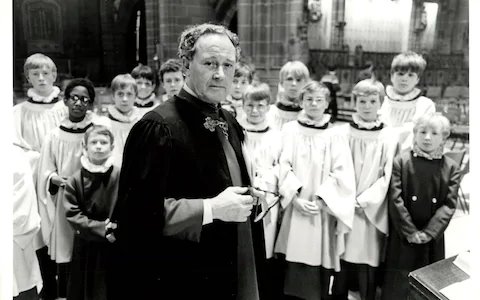 On October 25 1978, in the presence of the Queen, the Liverpool diocese came together to celebrate the completion of the cathedral with A Song of Creation, commissioned from the former chorister, John Madden. A challenging piece, it was scored for two groups – at the east end an organ and brass ensemble, and at the west end a double choir with organ and more brass players. All were expertly controlled by Woan.

The performance was televised and later released on record, as was the subsequent Diocesan Choral Eucharist involving some 2,000 singers. Further recordings followed, before Woan’s retirement from the cathedral in 1982.

In retirement, as well as indulging his love of fell walking and gardening, Woan served as a sacred music producer for Abbey Records. In 2004 he was one of the 78 male recipients of the Royal Maundy Money, presented by the Queen. Taking part in the service was his 14-year old granddaughter, Rebecca, a member of the newly formed Girls’ Choir.

In 1953 Ronald Woan married Doreen McLoughlin. She survives him with two daughters and a son. 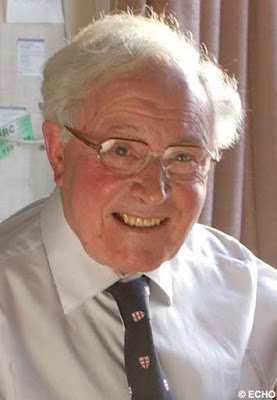 For some reason Paul McCartney changed his mind about being a choir boy. Around the age of 14 he was a member of the choir of St. Barnabas, the church facing the famous 'shelter in the middle of the roundabout' near Penny Lane.
at May 12, 2019