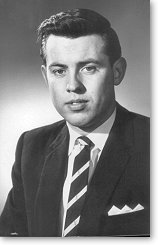 Realising that Nigel was not particularly musical but still wishing to include him in some way, John decided Nigel could be the Quarry Men's manager. Walley duly set about trying to get the group some bookings, John promising him an even share of whatever fee he could get them.  He took the role seriously paying a local printer in Woolton 7s 6d to produce business cards which he placed in shop windows, and handed them out to anyone who would book them so they'd remember who they were for next time. Reportedly he also had flyers made which he sent to local ballrooms and social clubs advertising that the Quarry Men were available for hire. 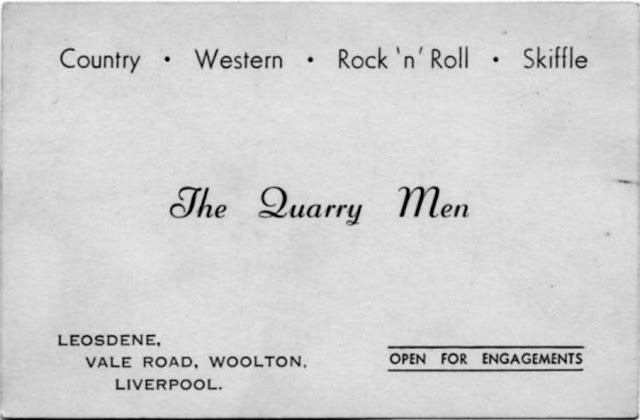 He had some success, securing the Quarry Men two intermission appearances at the Gaumont Cinema on Mather Avenue in Allerton as well as engagements at Wilson Hall in Garston and the New Clubmoor Hall in Broadway, Norris Green.

Walley left school at the age of 15 taking up a professional golf apprenticeship at Lee Park Golf Course, not far from Gateacre, and it was here that he met Dr. Joseph Sytner whose son Alan had recently opened a new club in Mathew Street called the Cavern. Enquiring whether he might possibly have a fatherly word and get the group a booking there Dr Sytner suggested that the Quarry Men first perform at the golf club one evening so they could be assessed. Having passed the audition the group made their debut at the Cavern club in the early months of 1957.

Although he attended the Woolton Church fete on 6 July 1957 Nige was not present when Ivan introduced his schoolfriend Paul McCartney to John Lennon. Walley suffered from asthma and following an attack that afternoon had gone home to recuperate.

Walley continued to manage the Quarry Men after Paul McCartney joined but the two clashed, Walley later saying 'the funny thing was that whenever Paul was around he'd used to say 'don't pay anyone who's not playing'...He didn't really rate managers'.

Nigel contracted tuberculosis and as a result he gave up managing the group. In addition his family moved from Vale Road to New Brighton on the Wirral which made things impractical. Paul's objection to Nigel receiving payment for managing them probably played a part too.

He left Liverpool in 1961 when he qualified as a professional golfer and found a job in a hotel complex in Semmering, Austria.

John Lennon kept in touch, even after becoming a 'famous Beatle'. 'I would go round to his flat or house and we'd talk....He never forgot any of the old gang'. 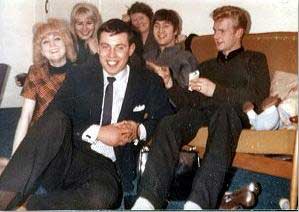 Nigel is pictured above with John, Pete Shotton and various wives in December 1963.
By 1963 Nigel was settled in Borough Green near Sevenoaks in Kent and amused by his friend's success. His younger brother regularly sent him a copy of Mersey Beat so he could keep up to date with what was happening back home.

In May that year Mersey Beat published an article about the Quarry Men. Nigel was inspired to write to the paper's editor Bill Harry, submitting his own memories of that time for publication.

The three page letter reproduced here has just come up for auction by Tracks UK, one of the country's leading memorabilia specialists. 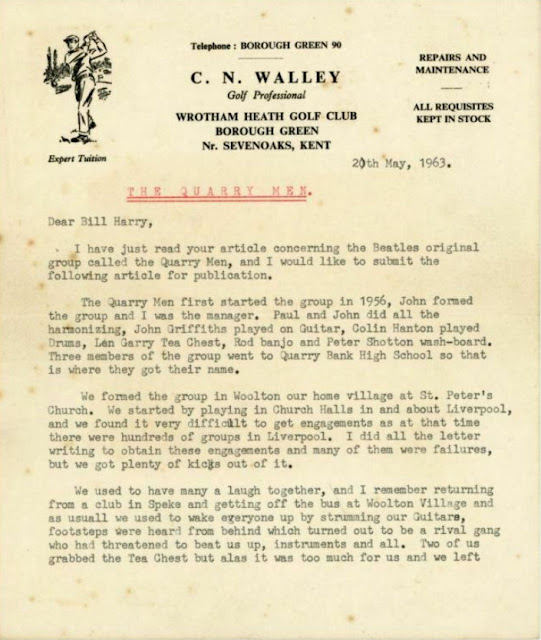 Some points of interest:  Nigel confirms that John formed the group in 1956, not 1957 as some publications would have you believe; John Griffiths was actually Eric Griffiths; he seems to have forgotten Rod (banjo) Davis's surname, and accepts that the group were named after the school where three of the members attended.  Two pages on he emphasises that the group are called the Quarry Men - two words, not one.

As their 'manager' it was Nige's duty to get the group bookings. Aside from Church Halls in South Liverpool (including St. Peter's in Woolton) they played Wilson Hall in Garston (probably the club Nige refers to as being in Speke) as the often repeated story of the group abandoning the tea-chest bass is usually told in conjunction with the tale of them having to run for the bus from Garston back to Woolton village. That said he does actually name Wilson Hall as being in Garston on page 2. so perhaps the club in Speke is one I've yet to identify. It was possibly the British Legion Club in Conleach Road where another skiffle group, George Harrison and the Rebels would make their debut. 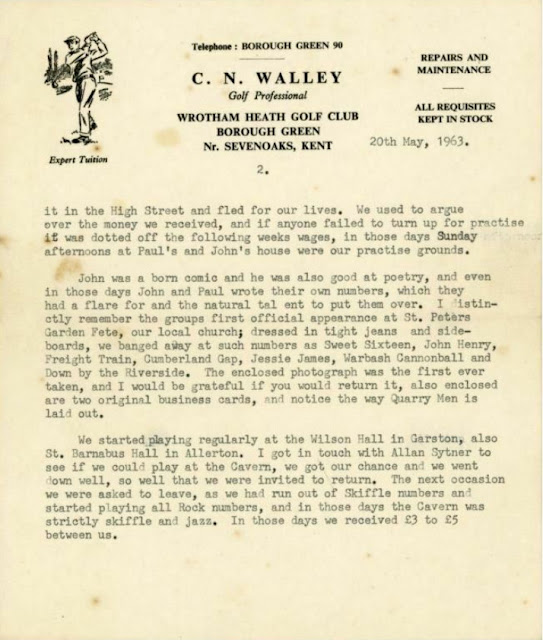 When Paul joined in the Summer of 1957 his house in Forthlin Road quickly became a favourite place to rehearse. Mimi is not thought to have been keen on John and his 'little friends' making a noise in her house so it's possible that when Nigel refers to John's house he's actually thinking of Julia Lennon's home in Springwood.

Of the songs he recalls the Quarry Men performing on that fateful night in July 1957 there's a couple not usually mentioned amongst the skiffle numbers they'd heard from Lonnie Donegan and the Vipers Skiffle Group.

I can't find any song entitled Sweet Sixteen. It could be When You Were Sweet Sixteen (as performed by the Mills Bros. or the Chordettes) but it could just as well be Chuck Berry's Sweet Little Sixteen. If so, Nige's memory is faulty because the latter record was not released until January 1958.  Nige may well have seen the Quarry Men perform that song later on.

Edit: It's been pointed out to me that the song is Lonnie Donegan's 'Putting On The Style', the first line of which is 'Sweet sixteen, goes to church, just to see the boys'. How could I have missed that? I even had a tape of the Quarry Men performing that song at the fete!! (Thanks Ed)

Note also Nigel's aforementioned comments about regular engagements in Wilson Hall and the St. Barnabas Hall in Allerton (now known as Dovedale Towers on the corner of Dovedale Road and Penny Lane). 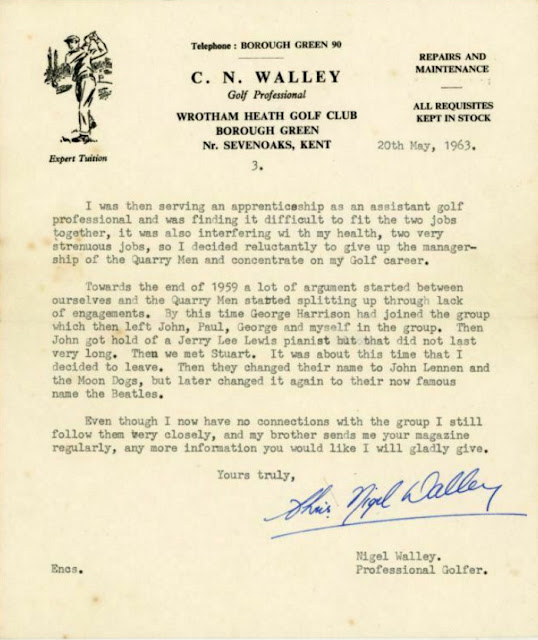 Nigel admits that managing the group as well as serving an apprenticeship was interfering with his health so he decided to concentrate on the golf career.

It's unclear exactly when he actually quit. Mark Lewisohn dates Nigel's TB diagnosis as Spring 1958. Nigel's letter indicates that it was 1959.

George Harrison joined in early 1958 and Colin Hanton was still with the Quarry Men until early 1959. To this day there are still disagreements about when Len Garry left. The 'Jerry Lee Lewis pianist' John got hold of was actually Paul's friend from Liverpool Institute, John 'Duff' Lowe and he played with them on and off until the end of summer 1958.

Accompanying the letter was a copy of the photograph showing Nigel with John Lennon on Lime Street, Liverpool in May 1958. 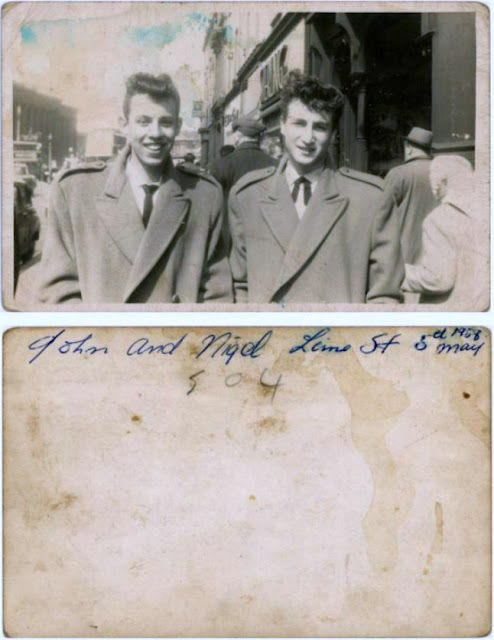 For some reason, Harry chose not to use the letter or photograph.

Still going strong, Nige has recently returned to the Quarry Men fold, occasionally appearing on stage with them in his old musical role of tea-chest bass player.

The auction description is as follows:

The letter is dated 20th May 1963 and it was sent to Bill Harry the editor of the Mersey Beat newspaper proposing an article about the formation and the early days of John Lennon’s group the Quarry Men. The letter has been signed by Nigel Walley in blue ink. The article was never published in Mersey Beat. Comes with an original vintage snapshot photograph of John Lennon and Nigel Whalley which was taken on Lime Street, Liverpool on 5th May 1958. 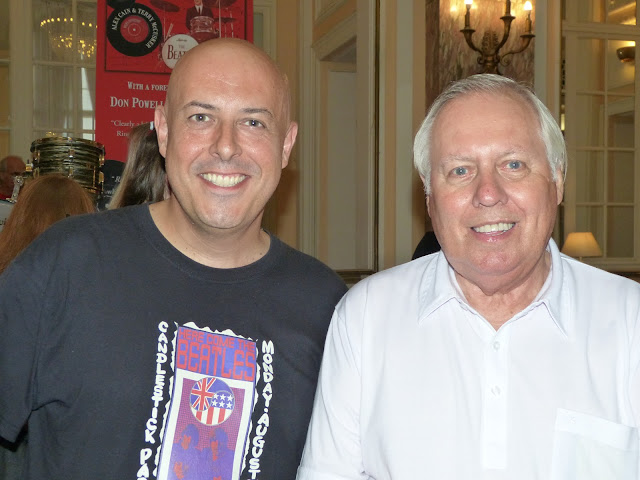 The author with Nigel Walley in 2017