The supposed link between the street Penny Lane and the 18th century slave ship owner and anti-abolitionist James Penny has continued to dominate local headlines concerning the ongoing debate in the city about road names linked to slave traders such as Bold Street and Seel Street with the council planning new measures to acknowledge Liverpool's shameful role in the trade.

Why the papers have continuously cited Penny Lane as an example is obvious. It's possibly the most famous road in Liverpool, known the world over because of the Beatles' 1967 single. A headline about the mayor refusing to consider renaming Bold Street because of slavery connections wouldn't grab the readers' attention in the same way, especially if they lived elsewhere in the country.

However, the morning started positively with the news that the International Slavery Museum in Liverpool was undertaking a review of their decision to include Penny Lane in an interactive display which identifies the connections between the slave trade and several streets in the city.

The Museum confirmed that the exhibit was based upon research carried out in 2007 and while they have always accepted that there was some debate amongst historians they felt this encouraged open discussion with visitors.

However due to the more recent (and perhaps more extensive) research carried out by Glen Huntley (see previous blog) and the museum themselves they now accept that the inclusion of Penny Lane in the display requires re-evaluation.

It is important to stress that none of the historians who have conducted their research have done so to disprove the connection but the simple fact is that, at present, nobody has found any evidence linking the street with James Penny. The Museum encourages anyone to share their evidence and research on this topic if they have any.

A sensible approach to a rightfully sensitive subject unlike some of the inflammatory headlines we've seen in the media this week.

With headlines such as Liverpool Mayor Joe Anderson has knocked down calls to change the iconic street name Penny Lane..... Liverpool mayor refuses to change name of Penny Lane that was made famous by the Beatles after claims it was named after 18th century slaver....  there was a feeling amongst the Beatles community on Merseyside that it was only a matter of time before somebody acted impulsively, without stopping to consider whether there was actually any evidence.

Blue Badge Tour Guide Jackie Spencer arrived in Penny Lane this morning to do a live video link. Planning to do a virtual walking tour for those currently unable to visit in person due to the lockdown restrictions she was stopped in her tracks when she saw the first Penny Lane street sign on the corner of Greenbank.

Overnight somebody had covered up the word Penny with black aerosol paint. Turning the corner she discovered two more, similarly defaced signs, including the one signed by Paul McCartney during 'Carpool Karaoke' 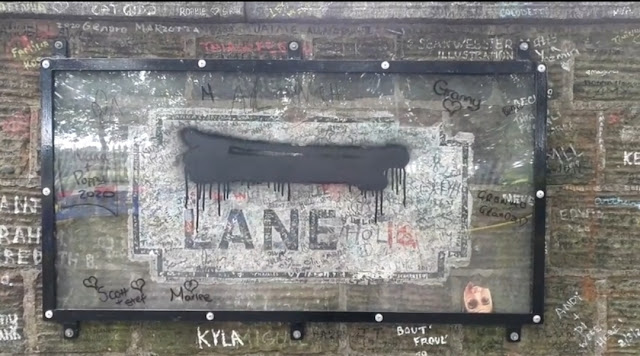 Broadcasting live on Facebook it was difficult at times for Jackie to hide her anger and emotion as her fears were confirmed.

Penny Lane is a long lane with street signs at both ends and in the middle. As she walked the length of the lane every sign she encountered had been defaced with black aerosol making the word Penny illegible.  On the wall by the Penny Lane wine bar the vandal had sprayed the word 'Racist' and at Dovedale Towers the message 'Penny was a Slave Trader' had been added to the wall next to another sign

By the time Jackie had got back to the Greenbank end of the lane there were already two locals, Emmett O'Neill and Lucy Comerford who had taken it upon themselves to remove the paint from the signs.

As Emmett told the Liverpool Echo 'It's an idiotic act. If you want something done or something removed there are ways and means. Defacing Penny Lane signs isn't going to change a lot. I just think it's the wrong way to go about things'.

The Mayor agreed '(an action like this) does nothing to further advance the argument and the debate around Black Lives Matter here in Liverpool. It isn't just about the artefacts and street names, it's also about how we change the fundamental things that are causing disadvantage and inequality within our city.'

Undoubtedly the vandal's attention has been drawn to Penny Lane because of the media constant use of the name this week.

As our friend Clark observed today 'let's be honest, if this incident finally spreads the facts far and wide about the mistruths of Penny Lane's etymology maybe it's a good thing. People might stop perpetuating the myth and everyone will know the truth.'

Instead ask 'does this incident illustrate the depth of feeling about the #Black Lives Matter movement, or the lengths other people are prepared to go to try and undermine it?'

The #Black Lives Matter movement may one day be looked upon as a massive leap forward. We must not allow it to be hi-jacked by ignorant ill-informed vandals.

Thanks to Jackie for the use of her photos. I leave the final words to her:


This is NOT about the destruction of statues and street names that have dubious connections. It is about knowing your facts before you act.
Come to Liverpool, take a slavery tour, find out all about the blood on our hands, and use these lessons from the past to make the World a better place.
I hope someday you'll join us, and the World will live as one

The historian Laurence Westgaph was interviewed on BBC Radio Merseyside's Roger Phillips show at lunch time today and discussed the whole issue more eloquently than anybody else I've heard this week. I strongly recommend you give him a listen (BBC I-player).

This is well worth a read: The Problem With Defacing Street Names & Statues Without Context