Clatterbridge Cancer Center had its origins in the accommodation provided for the treatment of infectious diseases for the Wirral Poor Law Union Workhouse in 1888. A purpose built infirmary block was erected in 1899. In the aerial photograph above the original workhouse buildings can be seen in the foreground.

In 1930, with the end of the workhouse system, the site became the responsibility of Cheshire County Council who renamed the facility Clatterbridge General Hospital. After it joined the National Health Service in 1948, it became simply Clatterbridge Hospital.

In the early 1950s, Liverpool was struggling to re-build after the war in a climate of fear about radiation and atomic war and the decision was made to take radiotherapy away from built up areas.

The green spaces of Clatterbridge adjacent to the general hospital, were the preferred site and the Regional Radiotherapy Centre, now known as the Clatterbridge Cancer Centre, was established on the site and opened by Lord Cohen in 1958.

There were various extensions and name changes over the subsequent decades before the hospital became known as The Clatterbridge Cancer Centre NHS Foundation Trust in 2012.

In 1969 George Harrison' Mum Louise was diagnosed with cancer and as her condition worsened George made frequent trips up to his parents home in Warrington, and later to the specialist cancer centre at Clatterbridge on the Wirral.

He was on one such visit on 20 September 1969, missing a business meeting at Apple where John Lennon suddenly announced that he was leaving the Beatles. 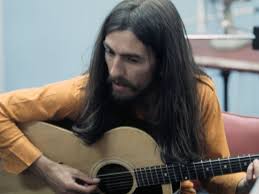 On 4 January 2021 somebody called Beatles Leaks posted a 12 minute audio sampler tape on YouTube of a previously unheard cassette of George Harrison performing around a dozen songs on acoustic guitar.
Internal evidence on the tape - which I'll cover in this post - indicates that the recording was made in Clatterbridge during a visit to see his parents Harold and Louise, circa May 1970.

As this is a sampler tape only excerpts of the songs are heard. Accompanying the post on YouTube is information about the length of each track on the original cassette:

The sampler tape starts with George midway through 'Dehra Dhun', a song written in India in 1968 and recorded but not released during the 'All Things Must Pass' sessions. George performs a snippet for Paul and Ringo in the 'Threetles on the lawn' section of the Beatles Anthology.

After announcing 'welcome to Top of the Spots' George, thinking about what to play next says 'I wrote this one ages ago but never finished it' before giving what to date is the earliest performance of 'See Yourself', written in 1967 in response to how the press treated Paul McCartney's LSD admission but not released until the album 'Thirty Three and 1/3' in 1976.

Following some dead air (papers rustling) we get a performance of 'Going Down To Golders Green', another candidate for 'All Things Must Pass'. A rough version has appeared on bootleg sounding very like something from Elvis Presley's Sun era if he'd been backed by the Plastic Ono Band. Golders Green was where the Apple group Badfinger resided.

Parts of 'Everybody, Nobody' were used in 'Ballad of Sir Frankie Crisp (Let It Roll)' on 'All Things Must Pass'. After some more dead air while George must be thinking what to play next he says 'I'd better play you this one then' and launches into 'Here Comes The Sun'.

He plays the wrong chord on the bridge and apologises 'sorry about that Mother' to Louise's audible amusement. Still thinking of what other songs he might play her he says 'oh, there's one, I don't know if I've got the words, but there's one I wrote the other night....this one is country and western'. 'Behind That Locked Door' follows.

Why are you still crying?*

Your pain is now through
Please forget those teardrops
Let me take them for you
The song is said to have been inspired by the disappearance of Bob Dylan in 1966 after his motorcycle accident accident and subsequent re-emergence at the August 1969 Isle of Wight festival, but in the context of Louise's illness the lyrics take on a new poignancy.

Louise asks him if the song will be on the new LP and George says 'I don't know, I may make an LP on my own, just to do all me songs, because once you've done 'em you want it out so you can stop thinking about them, and go on to the new one. There's another one that is quite nice (clears throat) it's a bit high though'.

He then performs 'All Things Must Pass' with a false start before the tape cuts into a brief performance of 'Let It Down' which quickly edits into a conversation George is having with his Dad, Harold about the group Badfinger.

Harold: I was wondering after that single ('Come and Get It') nobody even heard of them did they? It was good I thought. It was great that single, and then they disappeared.

G: They did an album which wasn't all that good. (inaudible) .... just did this thing which is probably gonna be out.

Badfinger's next single, 'No Matter What' was recorded in May but not released until November 1970.

George then attempts a version of the Paul McCartney composed 'Come And Get It' but struggles with the words...and the chords...

As the tape cuts back in George seems to be talking about the premise of the 'Magic Christian': '.....money all the time to do things and they don't believe it, it's like if you stand on the street and try and give ten bob notes away they all go what's this, they don't believe it, so he's always doing that'.

Following an inaudible question from Harry, George replies 'oh that's one I've got, this is funny, erm. yeah I've seen that, yeah what was that one I was trying to remember'.  He then sings:

I'm telling you for 29 years now,
I've been slogging like a dog...
I'll start again. This was about Harold Wilson again, 'Taxman'...  'Son of Taxman'.

Harold and Louise make a comment about Wilson being glad about something inaudible as George agrees and starts tuning his guitar.

He plays 'Window, Window' familiar to scholars of the Beatles January 1969 sessions. It sounds very close to the demo recorded with Phil Spector at the end of May 1970.

IF the tape was recorded in Clatterbridge Hospital then the surroundings may be subconsciously influencing George's choice of songs. You can almost picture him and his Dad sat at the side of a big brass (hospital) bed** on which his divine Mother lies, especially when his next, clearly improvised song seems to be offering Louise some words of encouragement to get out of there:

Get off your bed pan, you lazy bugger,

Get off your bed pan, and get home,
Get off your bed pan, you lazy bugg-er
'cause there's cookin' and cleanin' at home
Get out of Clatterbrige, you lazy bugger...
... and then the tape cuts into some dead air before we return to George, now performing Elvis Presley's 'We're Gonna Move' which again has lyrics indicating he wants his Mum out of there ('there's a crack in this old ceiling, we're gonna move to a better home'). Perhaps they're in a part of the hospital that was formerly one of the old workhouse buildings.

We then hear what might be one of the highlights of the tape if it's ever released in full, a well sung and played version of Bob Dylan's 'Mr Tambourine Man'. I would have liked to hear more to see whether he's performing Dylan or the Byrds' arrangement.

Finally we have another edit and George is performing 'Long Long Long' before the tape cuts for the last time.

Sadly Louise was unable to beat this terrible disease and passed away on 7 July 1970 aged 59 years old.***

The 50th anniversary edition of George's triple album was due to get the deluxe reissue at the end of 2020 but like so many projects planned for last year it was delayed, presumably due to the current pandemic. The cassette of George singing to his parents was described on YouTube as a leak from the All Things Must Pass 2021 Box set. But was this particular tape ever under consideration? I'd be surprised.

I'm one of those fans who likes to hear new tapes of George singing anything, and especially songs I've never heard which is why I enjoyed the Early Takes: Volume 1 album in 2012. IF the performances on this cassette tape are as complete as the person behind Beatles Leaks says they are then I'm sure some of the songs could be cleaned up and released in some form, and I'd certainly enjoy listening to them.

However, the circumstances behind the existence of this tape trouble me. This is clearly NOT a tape that was intended for public consumption when was recorded.

In it's current, unedited form this is a highly personal tape recording during of one of George's private visits to see his ailing mother and listening to it with the dialogue intact between the songs I can't help but feel like I'm eavesdropping on what was undoubtedly an emotional time for the Harrison family.

I am surprised that such a personal tape would be handed over to those responsible for compiling new material for release. I had reasoned that it was more likely the cassette was stolen from the Harrison's at some point and found its way to bootleggers who are using the delayed 'All Things Must Pass' box set to drum up interest but other scholars and collectors have been in touch to advise that this tape first appeared on the legitimate allmusic site where there was a recent copyright dump of around 100 'All Things Must Pass' tracks which we must assume were put there to secure their legal ownership ahead of their appearance on the now delayed box set. I have been informed in the comments below that the cassette audio has been registered with the YouTube copyright ID, suggesting that the Harrison family have the tape under consideration for release, or are aware that the tape has fallen into the wrong hands and simply want to infer their own legal rights to the material.

When I Iast checked YouTube today the link to the audio had already been removed.

** a lyric from Lay Lady Lay (Dylan)
*** Ringo's 30th birthday, Jim McCartney's 68th birthday
Thanks to Dan Matovina for suggesting the conversation George was having about giving away money tied in with the themes of the film 'The Magic Christian'. In the context of the preceding discussion that suggestion makes perfect sense.
at January 12, 2021