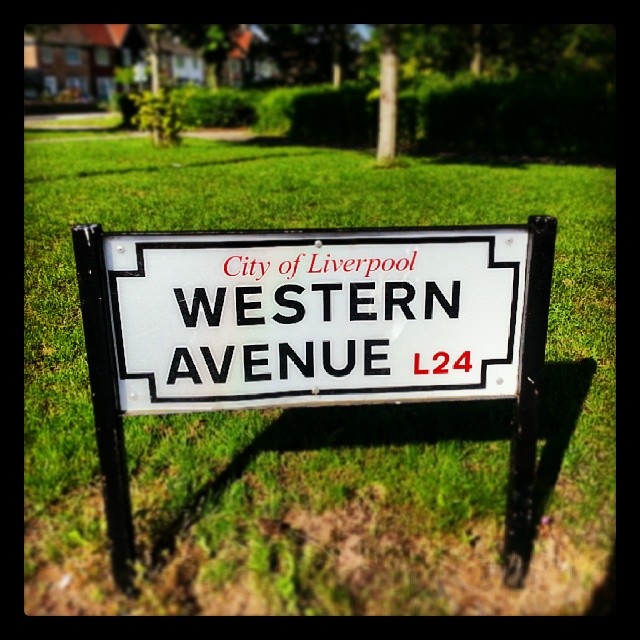 The McCartneys moved to Speke in August 1947 the first time anyone in the family had lived outside of the Everton / Kensington area in the north of the city.

Paul had just turned five and the move south arose when his mother Mary was appointed as resident Municipal Midwife on the new, still expanding housing estate. 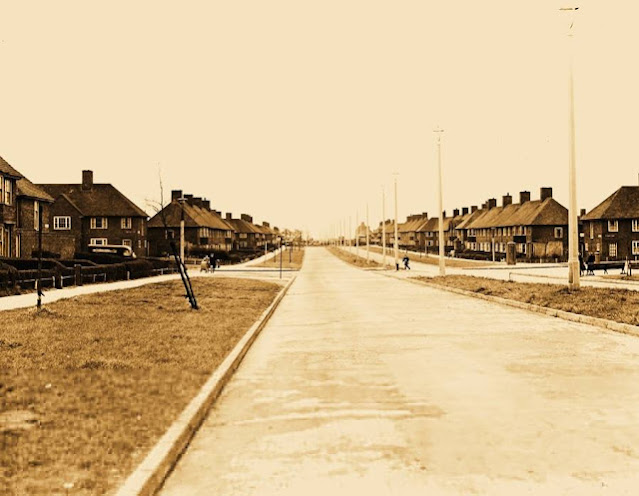 Western Avenue at the time the McCartneys moved in. Today those same saplings are substantially taller! 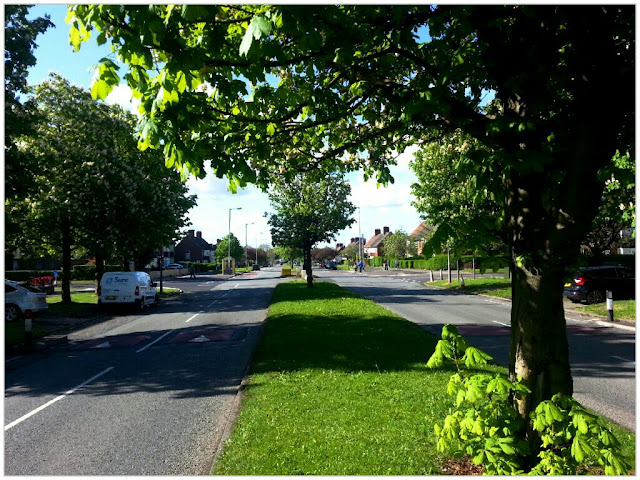 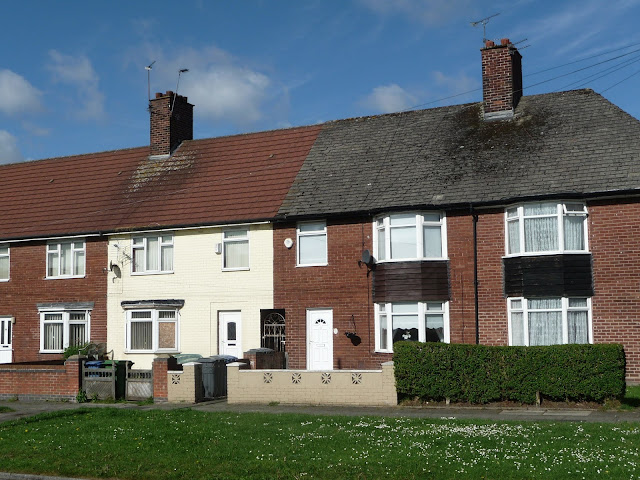 The house at 72 Western Avenue came with the job, rent free which was undoubtedly a relief for the family after the years of hardship experienced during the war. After a short term job at the Cotton Exchange Jim had been able to return to his pre-war job at Hannay's but the market was no longer stable. Sometimes he was lucky to bring home £10 a week (£6 after deductions) and seeing himself as the breadwinner in the family Jim was said to have been embarrassed that Mary was earning more than he was. In reality her salary wasn't much better than his, a basic £6 8s a week with the maximum being in the region of £8 8s.
Paul McCartney: Whilst we weren't a poor family, we weren't rich by any means, so we never had a car, or a television till the coronation in 1953. I was the first one in the family to buy a car with my Beatle earnings. My mum, as a nurse, rode a bike.
In the post-war baby boom Mary was certainly kept busy day and night and for this reason the house had a telephone but it was strictly off limits to the boys. The midwife's house was identifiable by the brass plaque on the gate reading Mrs M.P. McCartney SRN, SCM and Paul would later remember many occasions when a member of the community knocked at the house to give her gifts in thanks for the babies she'd helped to deliver.
Paul: I have a crystal-clear memory of one snow-laden night when I was young at 72 Western Avenue. The streets were thick with snow, it was about three in the morning, and she got up and went out on her bike with the little brown wicker basket on the front, into the dark, just with her little light, in her navy-blue uniform and hat, cycling off down the estate to deliver a baby somewhere. 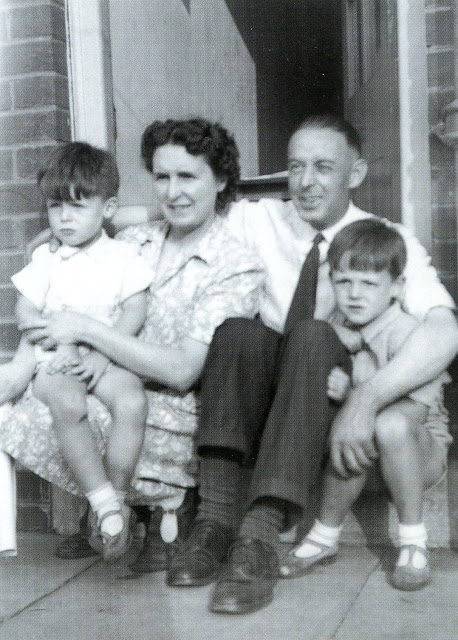 The move to Speke deliberately coincided with the start of Paul's schooling. Stockton Wood was only one street away, just behind the McCartney's house, but as more and more houses on the estate were built and Speke's population continued to expand the school which had been built to accommodate 1000 eventually had a roll-call of 1500, which reportedly made the infants school the largest in Britain (1). 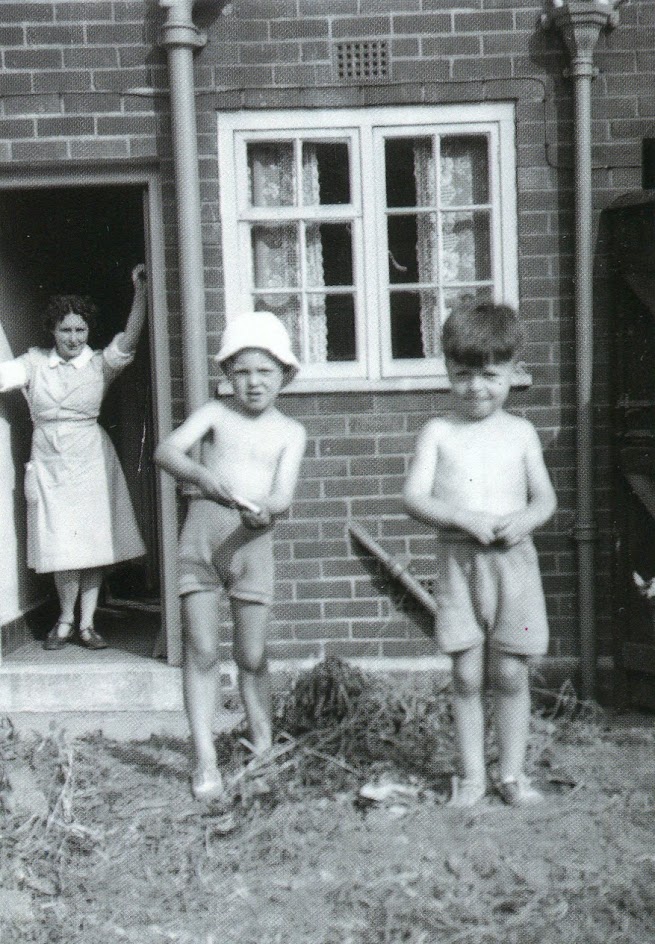 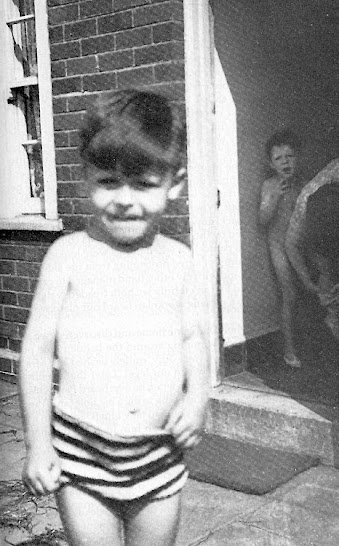 Many of the new families on the estate had been moved from underprivileged slum areas of the city where high unemployment was only one of the hardships they faced.  Inevitably many (but not all) of the children from these families had grown up tough and mixing with them on a daily basis both Paul and his brother Michael found out quickly that the only way to survive in school was to fight.
Paul: I started off going to school in a dead rough area of Liverpool. I used to have just as many fights as anyone else. I remember one day getting hold of this fellow and clubbing him with a big bar. I was only about five.
For this misdemeanor Paul received a telling off from the Headteacher during an assembly in front of the whole school, and a more severe rebuke when he got home.
Paul: We used to have fights regularly around Speke. I used to have fights all the time, and I wasn't doing too bad - I was winning a few and losing a few. I did it because I was in that environment. Everyone was fighting and everyone believed in fighting.
You can read more about his time at Stockton Wood School here.
Of course it wasn't all bad times. One of the best things about living in Speke was the proximity of the countryside.
In a couple of minutes they could be in Dungeon Lane, which led through the fields to the banks of the Mersey. The river is very wide at this point, with the lights of Ellesmere Port visible on the far side across enormous shifting banks of mud and sand pecked over by gulls. On a clear day you could see beyond the Wirral all the way to Wales.(2)
Paul: This is where my love of the country came from, I was always able to take my bike and in five minutes I’d be in quite deep countryside. I remember the Dam woods, which had millions of rhododendron bushes. We used to have dens in the middle of them because they get quite bare in the middle so you could squeeze in. I’ve never seen that many rhododendrons since.
Jim McCartney took great pleasure in gardening, an interest which led to him become the secretary of the Speke Horticultural Society. He also kept his eye out for horse manure, and it was his sons' job to collect it.
Paul: Talk about peer pressure, you would hope your friends didn't catch you shovelling the sh*t in the bucket. Then you'd have to carry it around to the garden. 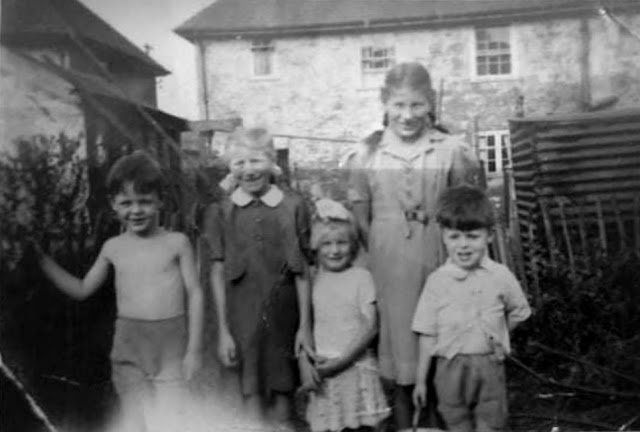 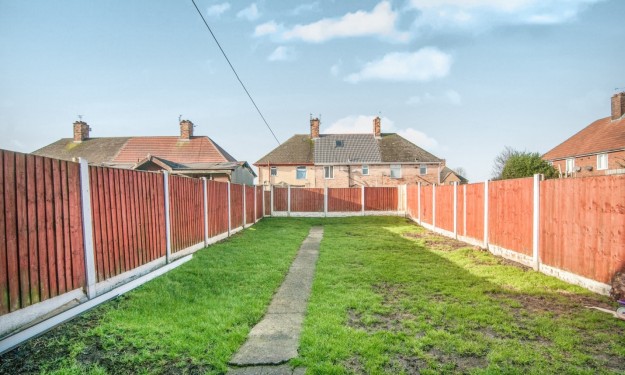 Mike McCartney: There was a girl, whose name I can’t remember – she was our next door neighbour in Western Avenue, Speke (we were number 72, so she would have been 70 or 74). She was more our kid’s age. (I've) got a picture of her.  (see below)(3).
She looks to be the same girl who appears in the middle of the group photo above. 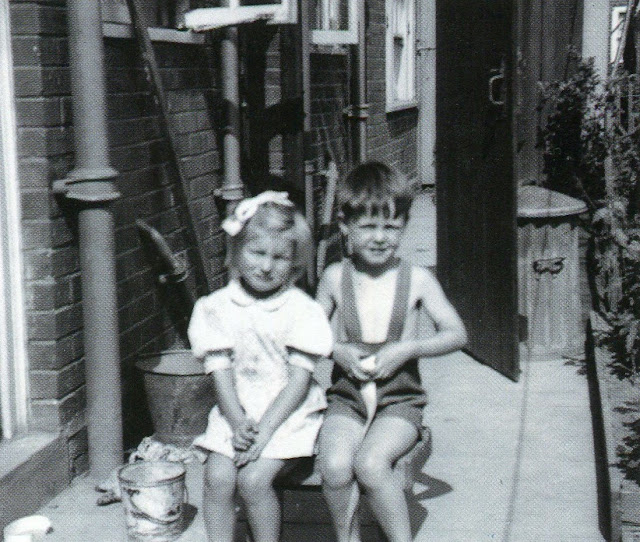 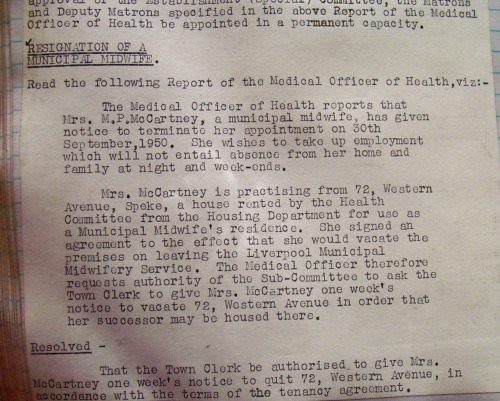 'Wishing to take up employment that [would] not entail absence from her home and family at night and weekends' Mary gave notice to terminate her employment on 30th September 1950. She wanted to spend more time with the boys.
Her replacement midwife was the confusingly similarly named Mrs H. E. Carney and it is my belief that this is why there are so many former residents of Speke who claim to have been delivered by Paul McCartney's Mum even though they were born after she gave up her midwifery role.
Mary knew that by leaving her job she would lose the house that came with it. In accordance with the terms of their tenancy agreement the McCartneys were given one week's notice to vacate 72 Western Avenue. 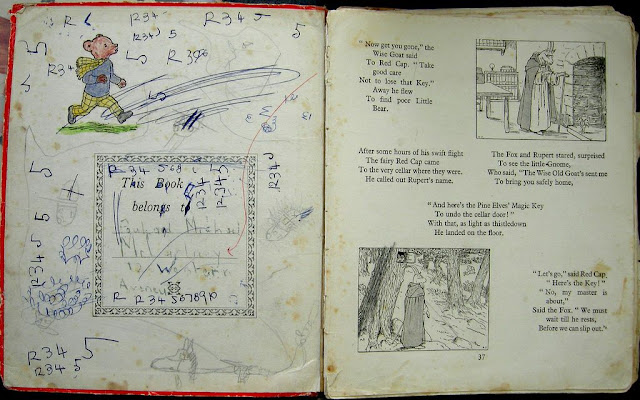 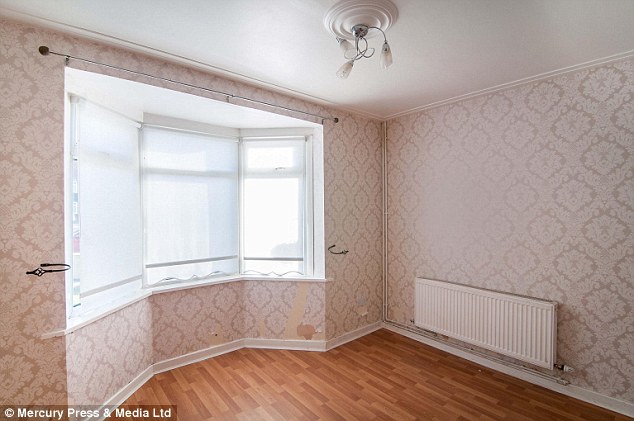 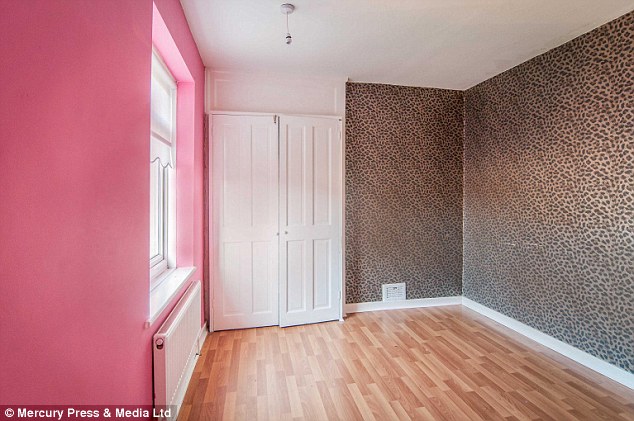 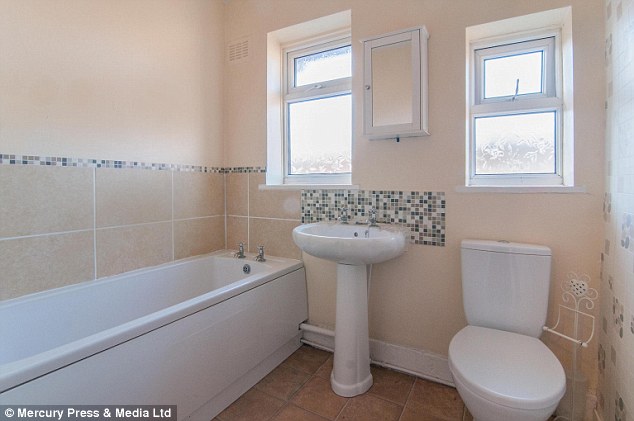 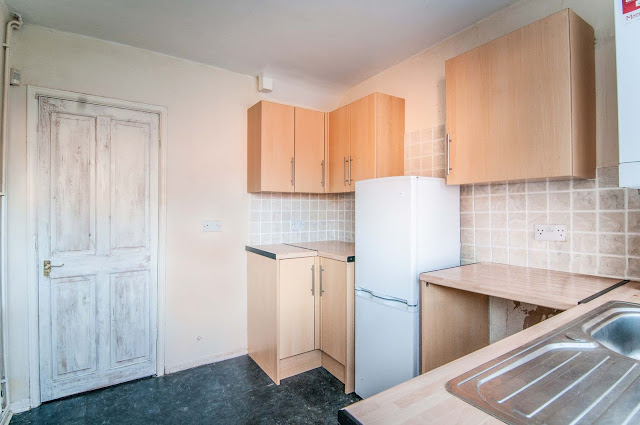 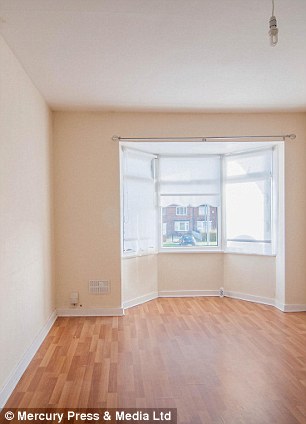 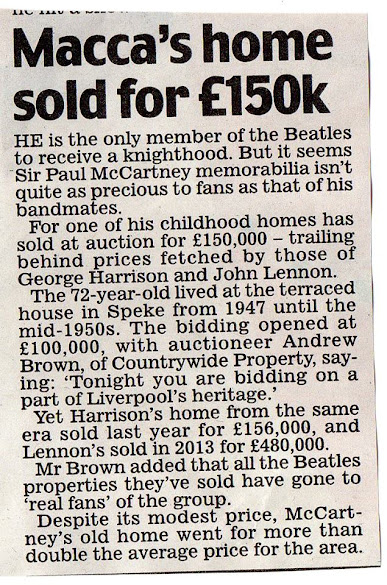 (1) The problem was solved by taking many of the children, including Paul and Michael, on a school coach each morning to Belle Vale, a half-hour drive north through Hunts Cross and Woolton, to the Joseph Williams Primary School, also newly built, which was then still on the edge of the countryside.

(3) The photo of Paul sitting with the girl from next door is usually printed in reverse. I've flipped it for this blog so that the drainpipes in this image are in the same position  on the back of the McCartney's house as they appear in all the other pictures. This and all other photos of the McCartney family in Western Avenue are the copyright of Paul and Michael McCartney.