The Tram Sheds with no Trams

John Lennon: ‘In My Life’ started out as a bus journey from my house on 251 Menlove Avenue to town,  mentioning every place that I could remember. And it was ridiculous. This is before even ‘Penny Lane’ was written and I had Penny Lane, Strawberry Fields, Tram Sheds – Tram Sheds are the depot just outside Penny Lane – and it was the most boring sort of ‘What I Did on my Holidays Bus Trip’ song and it wasn’’t working at all. I cannot do this! But then I laid back and these lyrics started coming to me about the places I remember. [1]

So where exactly where these Tram Sheds that John was still thinking about in 1965? That's what fellow historian and Beatles blogger Steve Bradley wanted to know when he messaged me last week. 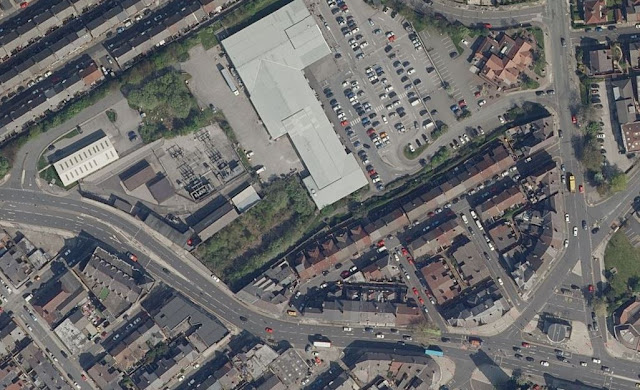 The answer is that they were just around the corner from the 'Penny Lane' bus shelter familiar to Beatle fans the world over. The circular shelter can be seen bottom right in the above photo, while the tram sheds were once sited where the rectangular, overgrown area is to the left of centre.  The tram (later bus) depot is now occupied by a small retail park. 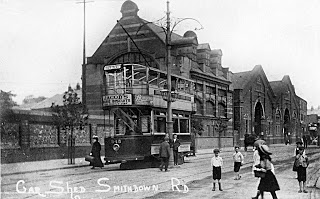 The Smithdown Road depot was Liverpool's second electric tram depot and opened in 1899. In 1912 the depot employed 64 persons and had a capacity of 96 cars [2]  The double-arched sheds can be seen on the right of the above photo.

According to Ron Smith's Liverpool Trams site it was in use up to around 1936 which means the depot was out of service, and presumably without its trams, even before John Lennon's birth in 1940.

Paul McCartney: ‘Penny Lane’ was kind of nostalgic, but it was really a place that John and I knew; it was actually a bus terminus. I’d get a bus to his house and I’d have to change at Penny Lane, or the same with him to me, so we often hung out at that terminus, like a roundabout. [3]

Trams to Woolton via Smithdown Road and 'Penny Lane' ran until 15 October 1949 when the service was replaced by buses, which is clearly how Paul McCartney remembers it. Between 1940 and 1945 John Lennon lived for a time on Newcastle Road, just around the corner and it's no stretch to imagine that he actually saw the trams still in operation passing through the depot and heading along the bottom of his road, up Church Road towards Picton Clock.

I used quotation marks because the bus (and former tram) terminus (the "shelter in the middle of the roundabout") is not actually on Penny Lane. It sits on a triangular junction between Church Road, Allerton Road and Smithdown Road and faces one end of Penny Lane.  Depending on where you were travelling to in the city it was often necessary to change at Penny Lane and buses with 'Penny Lane' displayed were common throughout Liverpool. 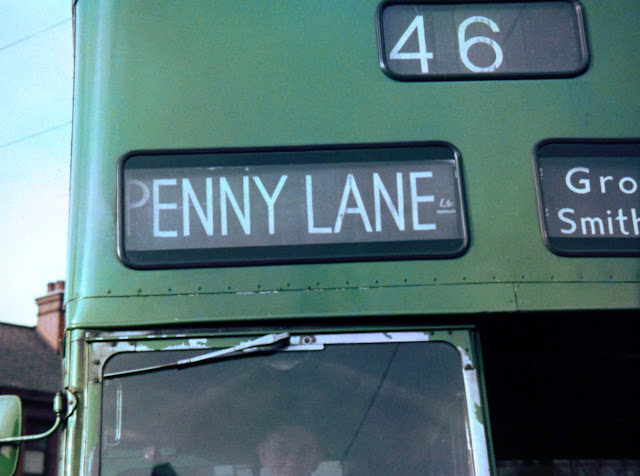 So why didn't the buses say 'Smithdown Place'?

John Lennon: Penny Lane is a suburban district where I lived with my mother and father (although my father was a sailor, always at sea), and my grandfather. I lived on a street called Newcastle Road [ ].

So the name Penny Lane was also applied to the area surrounding the bus terminus though some locals appear to dispute this. If you visit the area today you might notice how many of the shops in that area have the words Penny Lane in their name (e.g. Penny Lane Flowers or the Penny Lane Emporium). Of course these days it's hard to tell whether the owners are aware of the area name or are simply capitalizing on the Beatles' connection.

Trams passed through Penny Lane for the last time on 6 September 1952 but some routes continued in Liverpool for the next few years. On 14 September 1957 Liverpool's trams ran for the very last time, a parade of trams running from Bowring Park where I grew up (much later) towards the city centre. 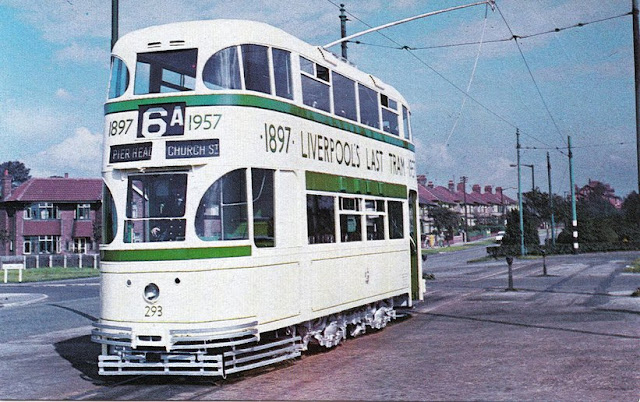 In 1946, around the time that John Lennon settled in Woolton, his Uncle George was working the night shift at the depot on Woolton High Street, cleaning the trams. While John still lived at Newcastle Road it's said he enjoyed walks with his grandfather, 'Pop' Stanley and eldest cousin Stan, to places like Wavertree Park (the 'Mystery'), Sefton Park, and even as far as the Pier Head. They would have passed the entrance to the tram depot on Church Road (later known as the Prince Alfred Road bus depot) and probably paused to watch the goings on, as they walked towards Smithdown Place. 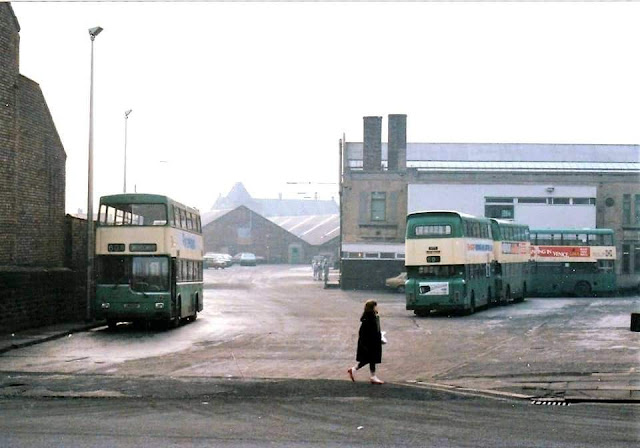 Replace the buses with trams and add in some tracks and overhead cables and you can visualise how the depot would have looked viewed from Church Road in the late 1940s. The rear of the two tram sheds are visible in the background of this photo taken in 1985 [4]. Contrast this with the modern image below. A public house and retail park now occupy the site. 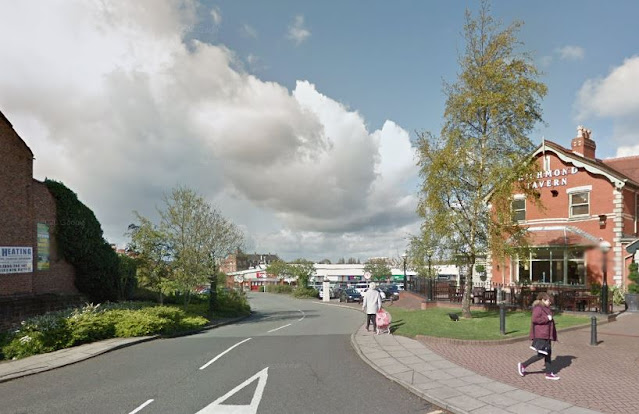 Given these early childhood memories it's likely that the young John had more than a passing interest in the trams and carried this through to his teenage years. On his way through Penny Lane on the 5 bus into town, heading for the Art College or perhaps a Beatles' engagement, he obviously noticed that many features of the Liverpool tram system remained well beyond the final closure. 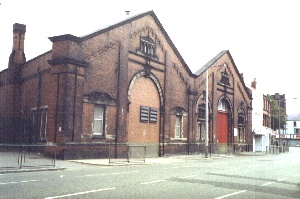 This picture of the Smithdown Road sheds was taken by Ron Smith on 28th September 1986 and was still standing in 1989, thirty-two years after the last Liverpool tram operated! The two depot entrances that were used by trams coming off the street can clearly be seen sealed-up at the front.

Twenty six years on from Ron's photo and the sheds have long gone as these shots taken in 2012 and 2019 attest. The entrance to the site was fenced off and displaying advertising hoardings until recently.

But what's the shed-like structure on the left? This is what prompted Steve Bradley to message me. Obviously it's not one of the two big sheds seen on the earlier photos but, set back from the road, I think it could have been part of the depot. Certainly when it's viewed from the side there are to be a number of openings, long bricked up which look to have abutted the missing sheds.
Today this is the Penny Lane Emporium, a mix of small retail units selling antiques, antique fireplaces, vintage furniture, art and vinyl records, but this set of photos I found on line shows what used to go inside. I'm no mechanic or tram expert but they look like generators of some sort, perhaps to power the trams? 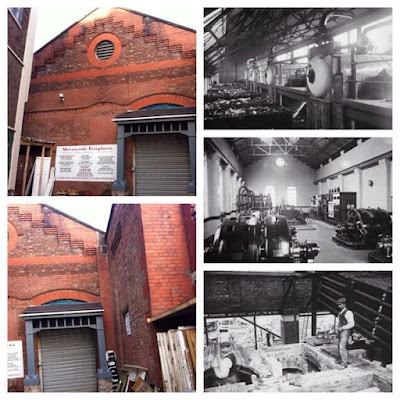 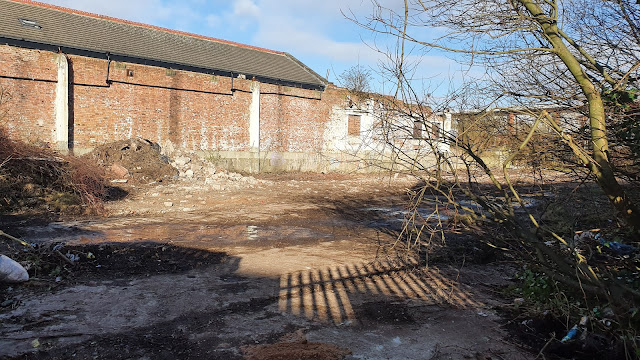 Today there's a useful cut through from the retail park to Smithdown Road that runs along the side of the old sheds. If you felt inclined to stick your nose between the railings and look down you could see that the old tram tracks were still in place, though overgrown in places. It's hard to tell from the above photo, but they were visible, honestly (I'd taken this photo through the railings on 1 February 2020).

A week later, with lockdown finally over in England I happened to be at the retail park behind the site waiting to pick up my son and thought I'd try and get a better photo.

To my surprise I found all the trees and vegetation had been cleared. Work could only have started in the last few weeks because workmen and an excavator were still on site.

The rusted tram lines are now clearly visible, running diagonally from left to right. Furthermore, the excavations had uncovered a trench containing the remains of what looked to be a brick walled inspection pit. 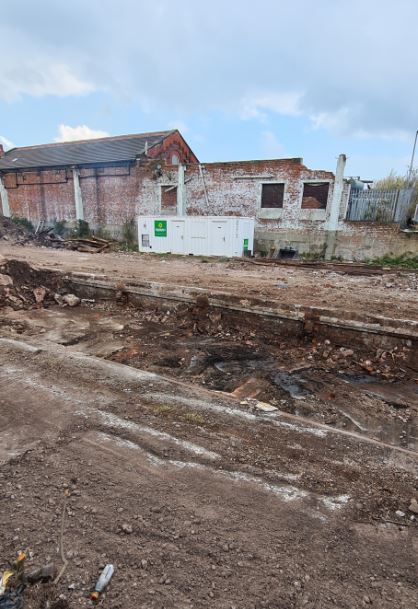 I know I haven't been out much in the last twelve months but I was quite excited by the unearthed archaeology.  It must have been hidden for at least a quarter of a century. If anyone knows what this trench was used for please get in touch.

It's amazing how by digging a simple trench we can open a window on the past. Back in September 2016 resurfacing works around the junction at Smithdown Place uncovered tram tracks not seen for over 60 years. I expect I was not alone in assuming that when the trams stopped running to Penny Lane the tracks would have been lifted and removed, to be reused or sold for scrap. In fact they were simply covered over here with a layer of tarmac and this seems to be the case across most of the city. Presumably this was the cheaper option in the 1950s and it still appears to be the case today. 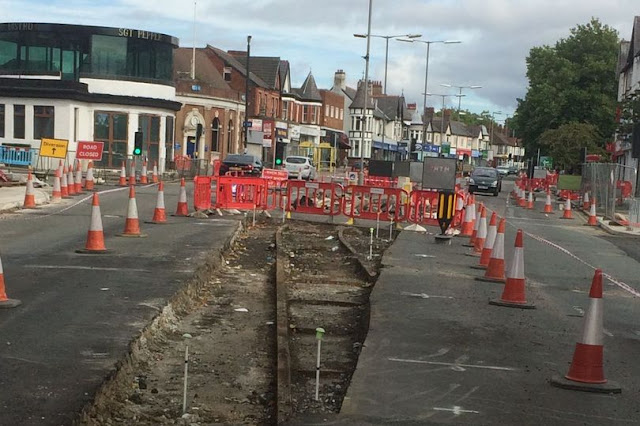 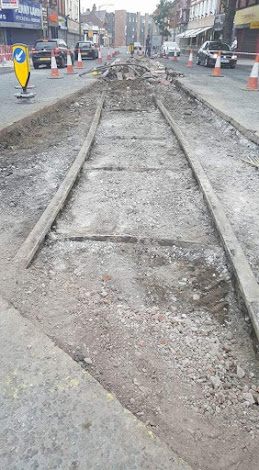 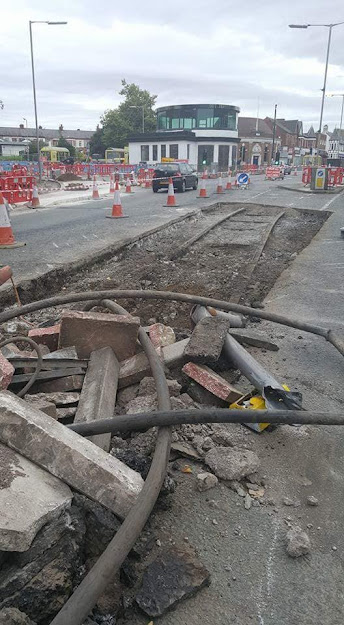 Photos taken around the Smithdown Place roadworks in 2016, showing the shelter in the middle of the roundabout and St Barnabas Church (where Paul McCartney was a choir boy). Photos by Mr John Lunt and the Liverpool Echo. 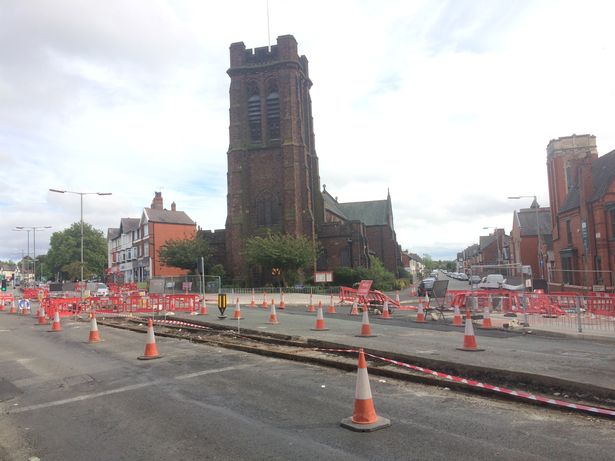 The building in the background to the right is Holyoake Hall, a Co-Operative Hall played by the Beatles, Gerry, Rory and many others, which I wrote about on this blog here 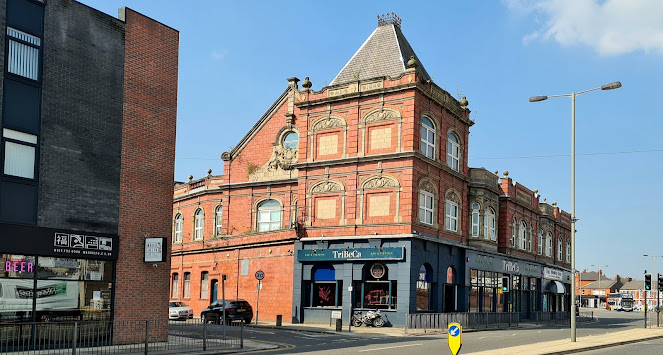 You can see the last remaining 'tram shed' behind the advertising hoardings on the right. Holyoake Hall is on the left facing the electrical substation (the rectangular building).
A couple of days after photographing the excavation works a the tram sheds site on my phone I went back with my 'proper' camera to try and get some better photographs.

I was too late. In the two days since my previous visit the site work which had briefly exposed the past had continued in my absence, and the mysterious trench had been completely obliterated.
As John Lennon put it: 'Some have gone, and some remain'. 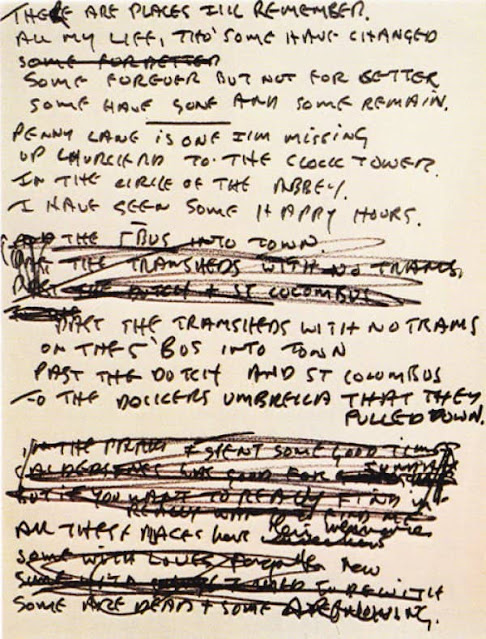 John Lennon's original lyrics to 'In My Life', naming many places familiar to Liverpudlians.

[1] The Playboy Interviews with John Lennon and Yoko Ono, p129.