486 Old Chester Road
Rock Ferry,
Birkenhead
Wirral
CH42 4PE
Some of you older people will remember a blog I did waaay back in 2016 about 'Ardmore' the large house on the Wirral owned by John Lennon's Aunt Anne (aka 'Nanny') and her husband Sidney Cadwallader.
As this was the largest house in the family it was common for the Stanley sisters, their husbands and children to gather here and a lovely set of photographs of one such get together dating from 1949 has been made public. They include what is believed to be the only photograph of John Lennon with his mother Julia. Here's a colorized version of that photograph for the younger people among you who can't watch black and white films. 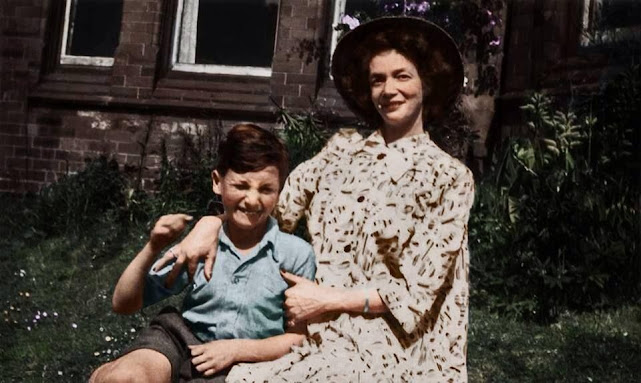 One of the most rewarding aspects of writing this blog is when one of my posts prompts a reader to get in touch and provide me with additional, previously unknown information, especially the sort of first-hand knowledge that no amount of research in books or on-line would ever unearth.
Here's a nice email from Pam Owen who has given me permission to reprint it here, together with her postcard:
Hi, I was reading your blog on John Lennon’s time in Rock Ferry and thought you might like to see the attached postcard showing the then front of the house ‘Ardmore’, the image dates from around 1910 I think.
'Ardmore' is the house on the left, on the right side of that first semi. It’s been taken from Egerton Park and shows the original orientation of the house. 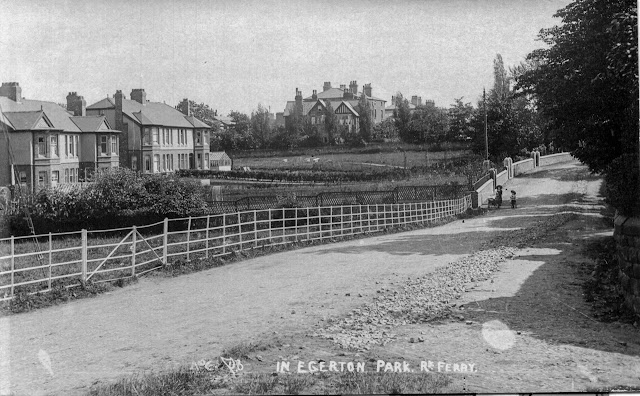 Egerton Park circa 1910 and 2020. Part of the lengthy front garden where John and his cousins once played was later sold off by the Cadwalleders, in common with their neighbours, and bungalows were built on the site. When this occurred Ardmore lost much of its grandeur, the impressive frontage becoming the rear of the house, now virtually invisible from Egerton Park. 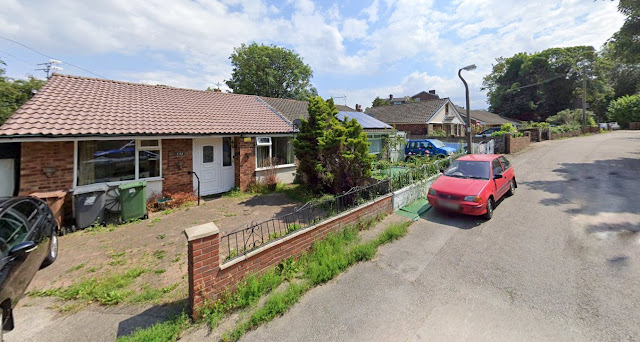 I live In Egerton Park opposite to the now built bungalows which were erected in the gardens of all the houses.  I’ve been here 59 years and can remember my Mum telling me John’s relatives lived there and over the years we’ve seen a few ‘fans’ wandering round looking for the house - I’ve also seen some fab photos of John at 'Ardmore', at various times in his life, which were displayed in a photo album at the National Trust’s Menlove Avenue house.
Thanks for the article, it was a great interesting read.
Cheers. Pam Owen 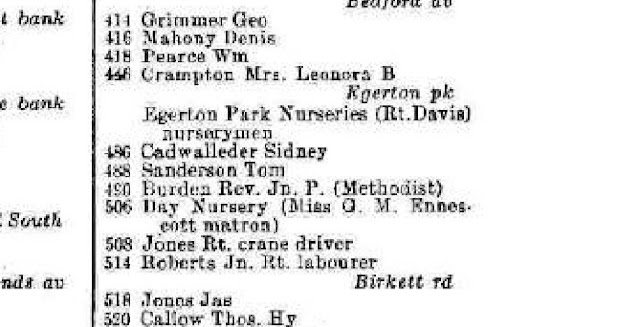 Kelly's Directory for 1955 showing the Cadwalladers at no. 486 and their neighbours
Pam has also sent me a follow up email prompted by some questions I sent her:
I’m not too sure when the houses were ‘flipped’, it seems feasible it was when the bungalows were built but, thinking about it, the orientation could of been either/or as the front (of the house) facing into Egerton Park only had a pedestrian gateway which you can see on the postcard and the photo I’ve attached of my sister Viv, (circa 1960) is taken from my house looking over to 'Ardmore'’s neighbour. You can see the gate and posts within the hedge. 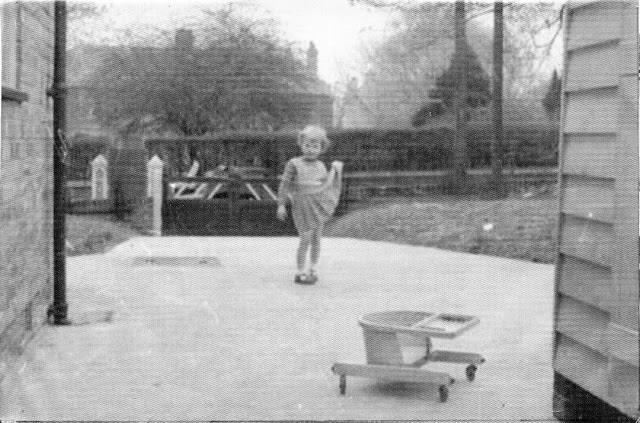 I’ve also attached a historic map which I think shows each gateway with the dotted lines. 'Arundel' still has an access way into Egerton Park, for some reason they retained the strip of land.  I’ve always wondered how the builder managed to convince all the home owners to give up half their gardens! 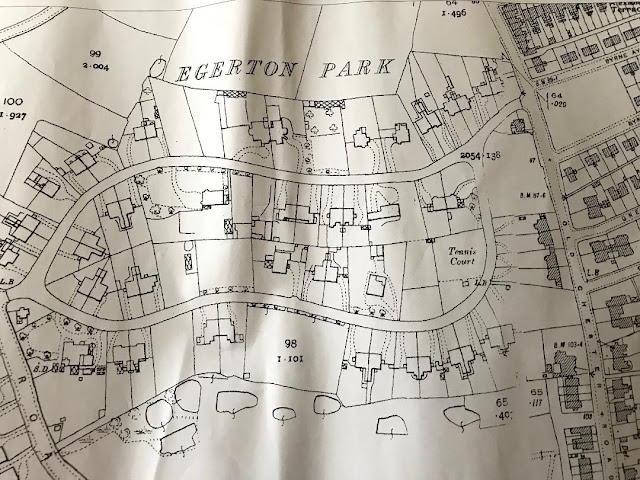 'Ardmore' is facing the tennis courts on the above map next to the letter 'L' of Old Chester Road. 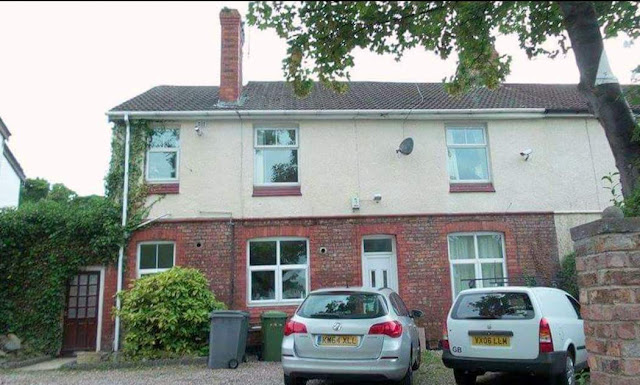 'Ardmore' today, photographed from Old Chester Road. This is now the less impressive front of the house.
Since the 2016 blog further Lennon-related photos have been identified as coming from 'Ardmore'.
There's a further photo from the 1949 gathering showing three of the Stanley sisters: (L-R) John's cousin Liela, Aunt Harrie, his mother Julia and Aunt Anne. 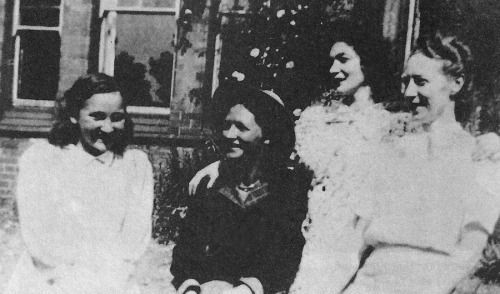 Previously I'd written that the oldest Stanley sister, John's Aunt Mimi, was 'conspicuous by her absence' in the 1949 photos but this picture has since turned up on-line. 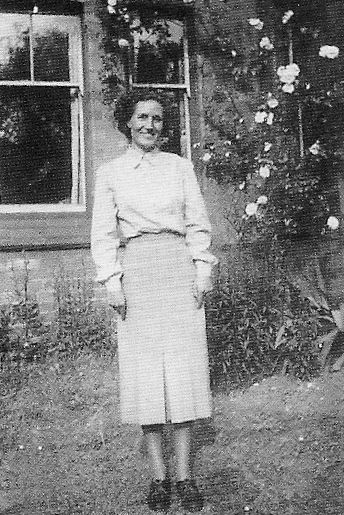 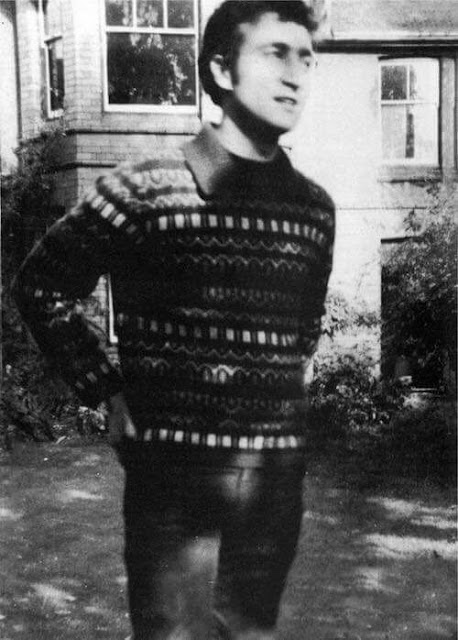 This photo was  reportedly taken in 1961 around the time of John's 21st birthday. I wonder if the jumper was a birthday gift? 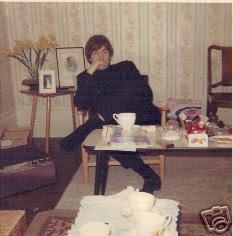 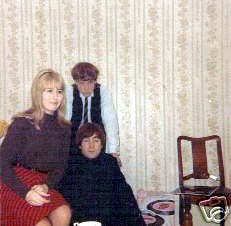 These two photos date from a Christmas 1964 visit to see the family. That's cousin Michael Cadwallader with John and Cyn. 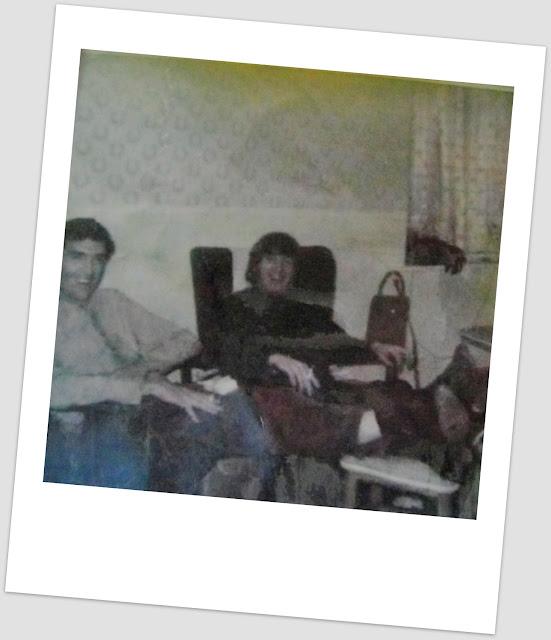 There's also this one, possibly from the same visit but to me John's hair looks more 1965 (possibly even early 1966) than the previous two. It could just be the poor quality of the image. Suggestions about who the man on the left is are welcome.
On November 17 1980 John Lennon released his Double Fantasy album. That same day he received a phone call from his sister Julia Baird. They talked at length about family and his plans for 1981 which included a return to Merseyside.
Last year Julia told the Liverpool Echo* 'Obviously we were all waiting for him to come home. And John said in November 'There are so many of you (relatives) we will all have to get together at 'Ardmore'. So we were going to meet in that house.
Sadly the reunion never took place for a reason no one could ever have imagined.
Addendum
I sent David Birch a copy of the 1910 postcard in case he hadn't seen it and he sent it on to his cousin Michael Cadwallader, who lived in 'Ardmore'. Both have kindly offered further information which I include here.
Ardmore was originally owned by Charles and Elizabeth (Mater) Parkes, who sold it on to Sydney and Anne (Nanny) Cadwallader.
I sent a copy of your blog to Michael for comment. (He does not do Facebook). Michael has got the old photo of Egerton Park. Thinks it might have been given to him by his neighbour. Thought it was unique but now thinks it is a postcard !!
By the 1950s/60s there was a huge weeping willow in the back garden. I do not think the road was made up even in those days.
The three neighbours sold their back gardens to a builder and put pressure on Sid and Nanny (Michael's parents) who eventually succumbed. They insisted on having a driveway to Egerton Park, but I do not know if that is still there.
We both think the last photo in your blog is not at Ardmore. More likely to be Mendips with a student?
Good blog, thanks
Thank you David and Michael.
* 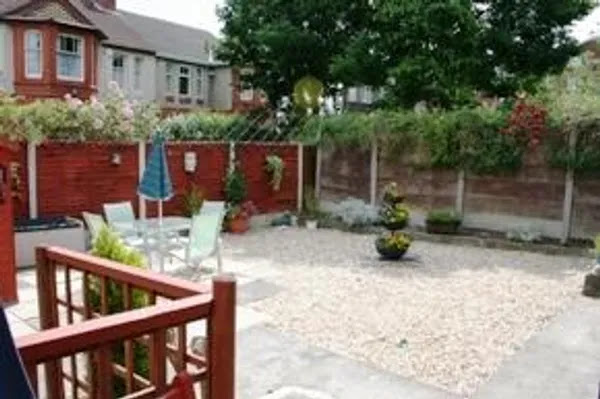 I've also been sent this photo by Richard Brown who emailed me to say that after reading the blog he went looking for photos of 'Ardmore' as it looks today.
This was taken from the back garden of one of the bungalows built on what was land at the front of 'Ardmore' and the adjacent houses.
What a shame such a fine house looks so boxed in these days.
Notes
* 25 November 2019
A big thank you to Pamela Owen for contacting me and  inspiring this post.
A big thanks also to David Birch and Michael Cadwallader for their kind words and assistance.
If the third photo of John was taken at Mendips as David and Michael suggest then it must date from one of, if not the, very last visits before the house was sold in 1965.
View the earlier 'Ardmore' blog here
at September 01, 2020 3 comments: