One of the most rewarding parts of researching and blogging about the early Beatles is dating a photograph and identifying where it was taken, especially when it has previously only appeared in a book or on-line captioned "Paul as a child". See my blog on Stanley Park for a previous example. 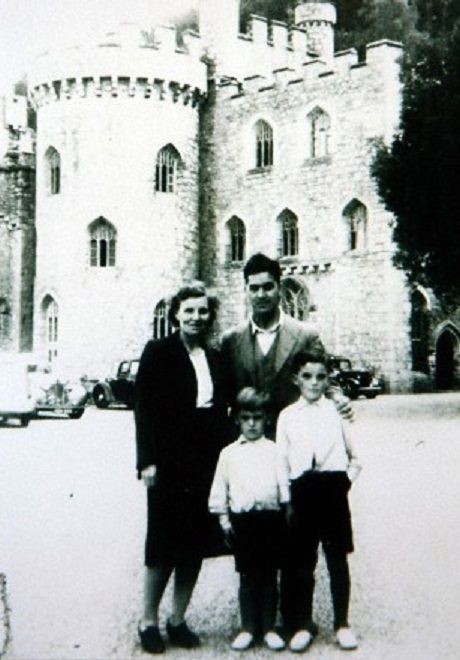 For this blog I want to examine the photo above. George Harrison, his older brother Peter and his parents Louise and Harold.

George was born in 1943 and he looks about 5 or 6 years old here so I'd estimate it was taken circa 1948-1949 while the Harrisons were still living in Wavertree. Presumably George's sister Louise or eldest brother Harry took the picture.

I've never seen the photo with a date or location whenever it turns up on line.

So what else can we see in the picture? A castle obviously, but one that from the small part of it we can see doesn't appear to be in ruins.

That rules out Conwy Castle, the go-to destination for many Liverpudlian on a day out in North Wales. I discounted the fortress-like Caernarfon Castle(see my recent post on Welsh Wales) which  includes a Harrison family photo that was taken there, possibly around the same time. Neither is it Harlech, Cardiff, Powis, Chirk or Rhuddlan.

In the end I bought a little guidebook on Welsh Castles. Disappointingly I couldn't find a picture that matched the Harrison photo. It should be noted that most of the big and famous castles in North Wales were built by King Edward I to subdue the Welsh. From a defensive point of view would it have made sense to put windows in the walls so close to the ground?

Aware that the Harrison's also liked to holiday in Devon I started looking at castles there. I didn't find what I was looking for but I did see a few I'm going to make a point of visiting in the future (Dartmouth Castle for one).

In the end I found the Harrison's castle by pure chance while watching an episode of BBC's Great British Railway Journeys with Michael Portillo in 2018 and saw this near identical shot. In the production photo below y ou can see the camera crew bottom left which should help visualise how the interview was framed on the TV.  Admittedly I do have a bit of a photographic memory when it comes to the Beatles but in most other aspects of life I'll often struggle to tell you what day it is, especially this year! 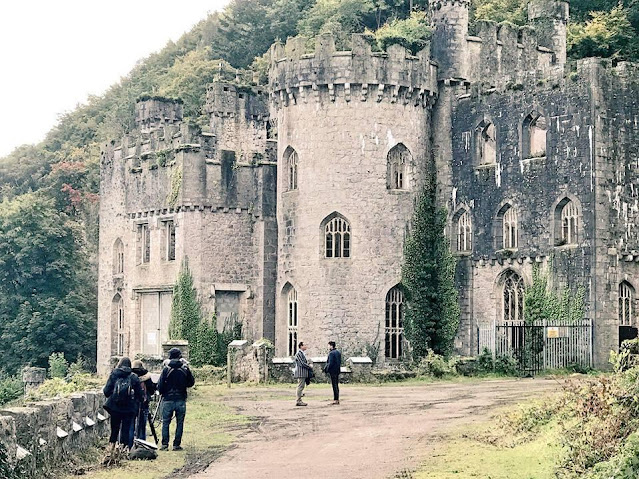 During his railway journey Portillo got off the train at Abergele and visited Gwrych Castle, a Grade 1 listed 19th century country-house**overlooking Abergele in North Wales.

As mentioned, it's not a real castle. It's what we term a folly which is a word often applied to a property privately built, seemingly with the intention of showing poor people how extravagantly the people richer than them can waste money.

From 1894 until 1924 Gwrych  (pronounced Goo-rreech) was owned by the Countess of Dundonald and her family. Upon her death it was left in her will to King George V and the then Prince of Wales (the future King Edward VIII). However, they refused to accept the gift and the castle passed to the Venerable Order of St. John.

Since then the castle has had a variety of uses.

During the Second World War Gwyrch was used by the government to house around 200 young Jewish refugees under the Kindertransport programme.

After the war the castle left the Dundonald family for the last time and was opened to the public as a visitor attraction.

Gwrych Castle became known as "The Showpiece of Wales" and attracted many visitors including the Harrisons and another Liverpool lad who befriended the future Beatle:

Tony Bramwell: I used to play there 70 years ago. As a child I spent a lot of time in Rhyl. I met Randolph Turpin and Buck Jones there (you'll have to look them up).

So I did. The brilliantly named Randolph Adolphus Turpin was an English boxer in the 1940s and 1950s who famously beat the great Sugar Ray Robinson in 1951 and became middleweight champion. Turpin was famously short of money and was using Gwrych as his sparring camp to bring in the punters at the time Tony met him. Reportedly the venture was set up by Leslie Salts, Turpin's business partner with Salts making all the money. This must have been considerable with as many as 10,000 people showing up at Gwrych on a single day during the summer of 1951 to watch Turpin fight. Turpin died in 1966, apparently by his own hand. 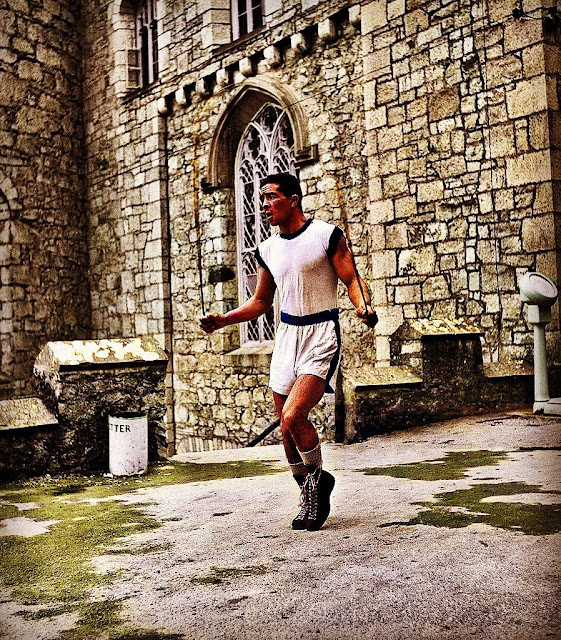 In the sixties it was a camp site and occasional venue for the Dragon motorcycle rally. In the seventies Gwrych brought in the tourists by hosting medieval re-enactments of jousting tournaments and period themed banquets. 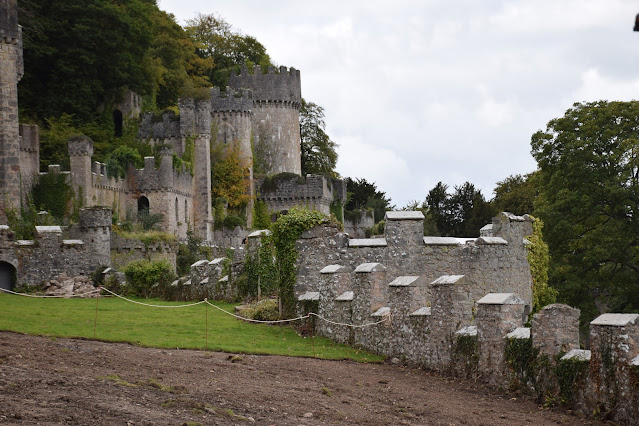 During the eighties the castle attracted scooter clubs from all over Britain and unfortunately fell victim to the anti-social acts of a minority who stole alcohol from the bar, swung from the chandeliers and damaged the furniture. One on occasion someone drove their scooter through a stained glass window.

Sadly Gwrych closed to the public in 1987 and appears to have fallen into decline quite rapidly. In 1989 an American businessman bought the property for £750,000 with grand renovation plans that never materialised. The castle was looted and vandalised until little more than the derelict shell remained. 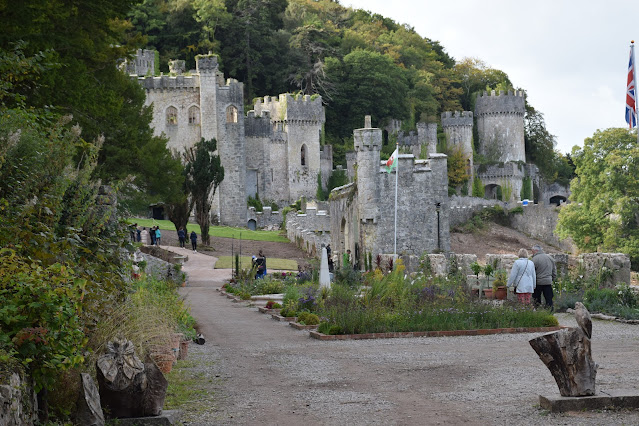 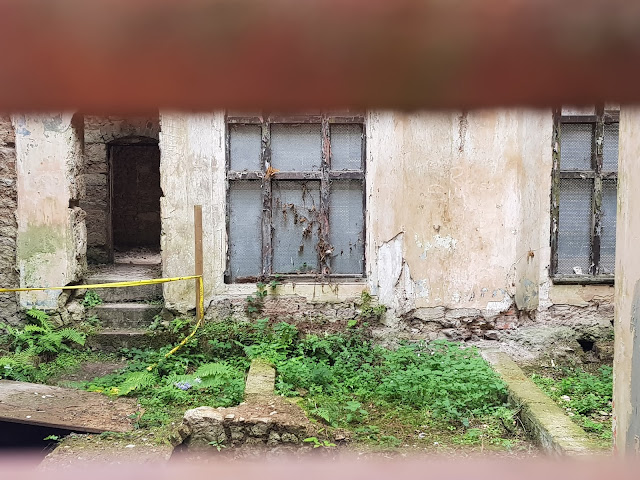 Unfortunately little had changed when we visited in September 2018. The interior today is quite unlike how it would have been in the 1950s when the Harrisons visited. 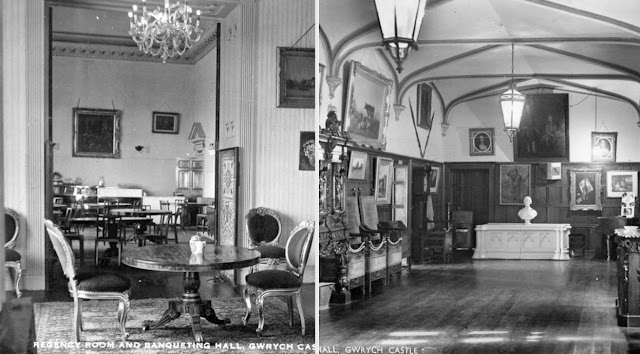 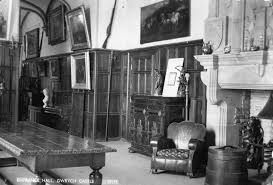 Hopefully there is some hope on the horizon.

The castle is now under the control of the Gwrych Castle Preservation Trust formed by historian Mark Baker, a local who has campaigned for the castle to be brought back to its days of glory since he was only twelve years old. The Trust is now a registered charity, enabled by a grant from the National Heritage Memorial Fund.

Due to the large cost of repairs and restoring lost content, the trust relies on volunteers or/and philanthropists who are able to contribute their time, experiences, knowledge and skills. 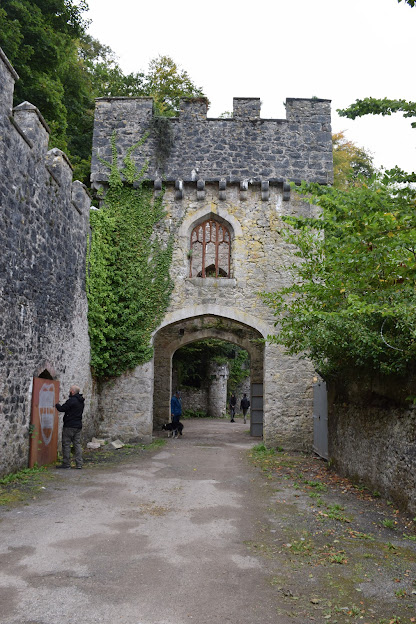 The impetus for this particular blog was this evening's season premiere of ITV's I'm A Celebrity...Get Me Out Of Here!, a British survival reality show now on its 20th series.

The show is usually filmed in New South Wales, Australia, but due to the current COVID-19 pandemic this year the series has moved to North Wales in... erm... Wales, with Gwrych being used as the stunning backdrop for the celebrities' base camp.

This will bring a huge amount of revenue in for the Gwrych Castle Preservation Trust. In addition to donating £300,000 to the Trust for the use of the site for four months reports state that as part of the agreement ITV will also support the ongoing restoration project of the site. Some renovation has already taken place to fix walls, floors and stairways to make the building safe for the filming. If this series is successful, and as one of the most popular programmes of the year there's no indication that it won't be, I suspect ITV may use it again next year, especially given their investment. 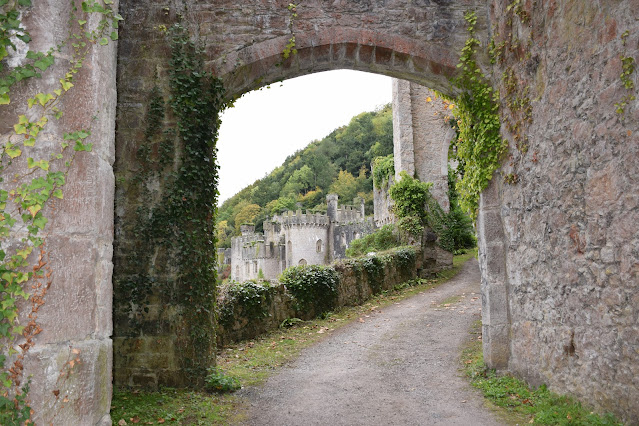 With Gwrych getting nightly exposure on UK TV for the next three weeks I expect that many viewers will want to see the castle for themselves as soon as national and regional restrictions on travel ease over the next few months, fingers crossed.

Perhaps one day in the near future Gwrych will again be able to welcome visitors in numbers not seen since the 1950s. 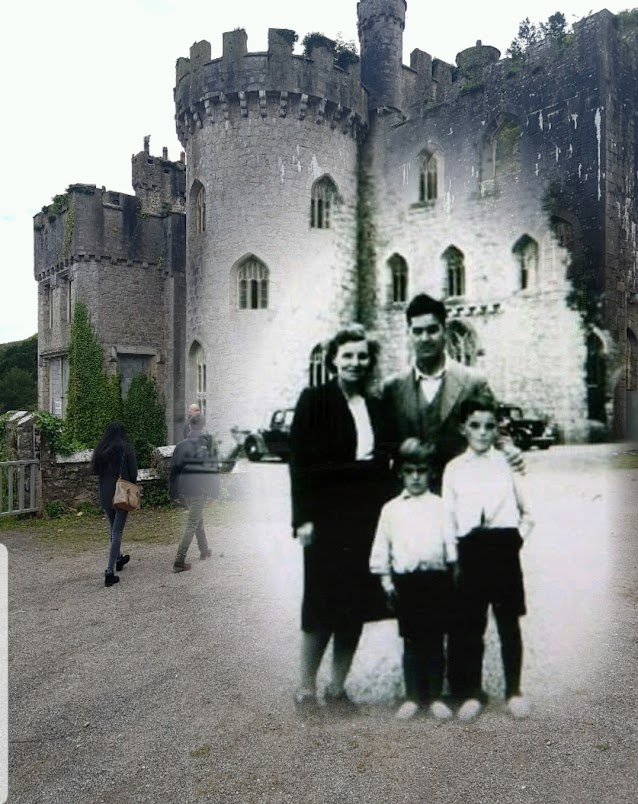 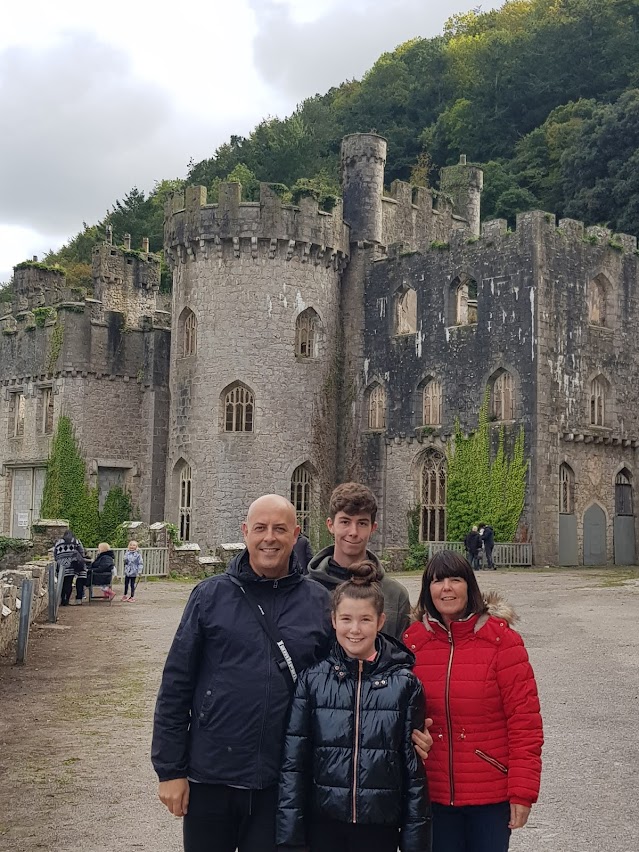 ** Seemingly the reason why Googling "castle" didn't bring it up. Pedants. 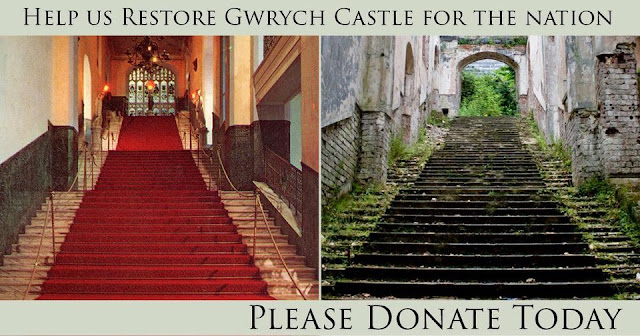 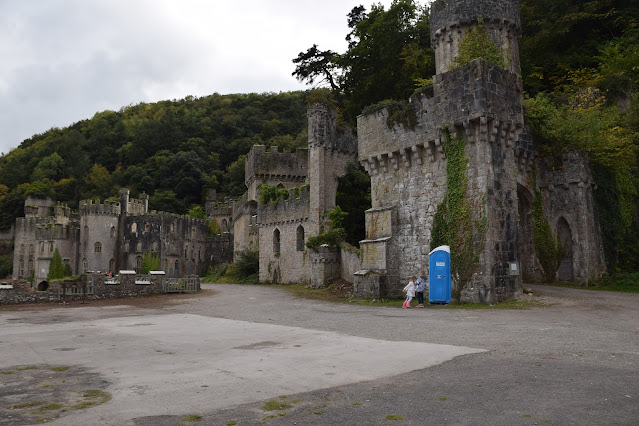 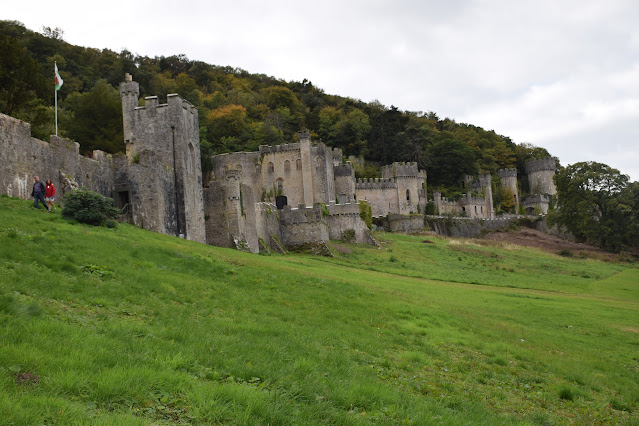 A detailed look at the locations used during the production of the 'Free As A Bird' video in October 1995.