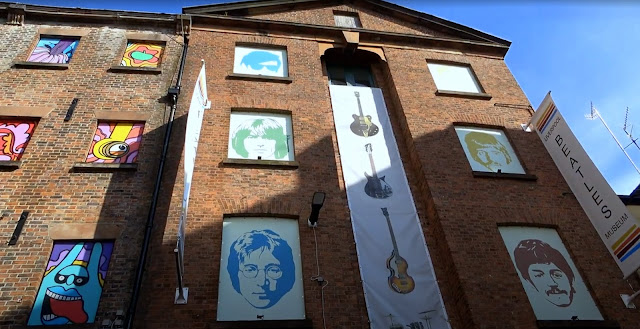 The latest addition to Roag and Pete Best's ever-expanding museum was revealed this morning by former NEMS and Apple employee, the Beatles' friend Tony Bramwell. 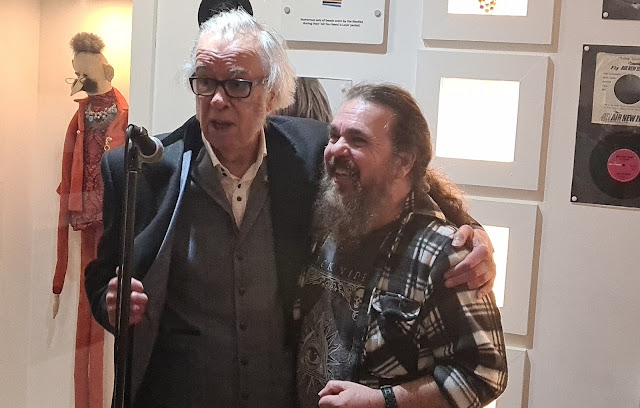 Although threatened, a 2022 reshoot of the cover for John and Yoko’s 1968 LP Two Virgins (for which Tony set up the camera, and then had the dubious honour of trying to find somebody to develop the roll of film) was thankfully NOT what was he was there to unveil.

The new addition is a 1969 "War Is Over" Christmas card from John and Yoko, one of hundreds which they sent out to various world leaders and other dignitaries as part of their peace campaign.

The card is signed “with love to the Wilsons from the Lennons.”

John with Harold 'Wilsod' as he called him.

Never one to miss a photo opportunity or to court the approval of the masses, Wilson was photographed with the Beatles in 1964 and, while Prime Minister in 1965, recommended to the Queen that the Beatles be awarded the MBE. 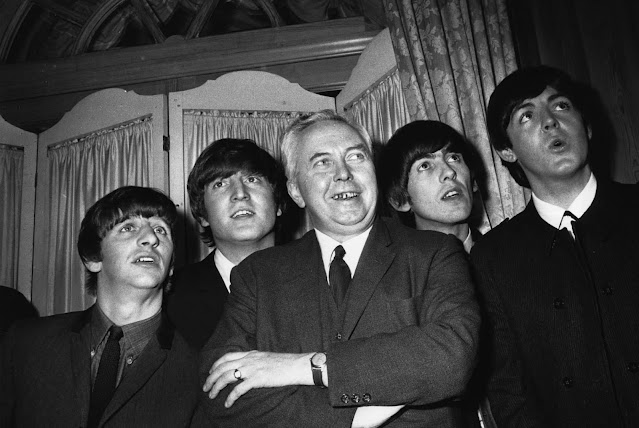 As George Harrison recalled in Anthology:  Probably it was Harold Wilson that put us up for it. He was Prime Minister and was from Liverpool, Huyton - 'two dogs fightin', one is black and the other's a white un'.

After all we did for Great Britain, selling all that corduroy and making it swing, they gave us that bloody old leather medal with wooden string through it. But my initial reaction was, 'Oh, how nice, how nice.' And John's was, 'How nice, how nice.'

Four years later and John had a change of heart. In November 1969 he sent his MBE back to attract attention to his causes: I had been mulling it over for a few years. Even as I received it, I was mulling it over. I gave it to my auntie who proudly had it over the mantelpiece, which is understandable - she was very proud of it. She won't understand this move I've made probably, but I can't not do it because of my auntie's feelings. So I took it a few months back and didn't tell her what I was going to do with it - no doubt she knows now - and I'm sorry Mimi, but that's the way it goes.

Anyway, I sold out, so it was always worrying me, and then the last few years I'd been thinking, 'I must get rid of that, must get rid of that.' I was thinking how to do it, and I thought if I did it privately the press would know anyway, and it would come out; so instead of hiding it, just make an event of the whole situation. So I did it with the MBE. I was waiting for some event to tie it up with, but I realise that this is the event, this is the next peace event going on now.

The MBE was returned directly to Buckingham Palace but it can’t have been long before Wilson's ministers in Downing Street got wind of Lennon’s gesture, and the possible embarrassment it had caused Her Majesty. If the Lennon’s antics over the previous 12 months (from Two Virgins and their drug bust onwards) hadn’t made them persons of interest in the eyes of the establishment already, from this point on their card was definitely marked, and in this case literally.

The Lennon’s Christmas card was placed with the rest of the ‘strange’ post that came into No.10 into what was referred to as the “nutty filing” cabinet. It was rescued by secretary and Beatles fan Ruth Ferenczy, who kept the card at home until her daughter Alex Rowe decided to loan it to The Liverpool Beatles Museum.

Speaking to the press today, Mrs Rowe said “My mum was filing one day and came across this card so she said to her boss: ‘Look at this, the Prime Minister doesn’t want it, can I keep it?’ and the boss said yes she could. Apparently Harold Wilson would write in green pen and if he was going to respond to mail he would write ‘yes’ or ‘no’.” 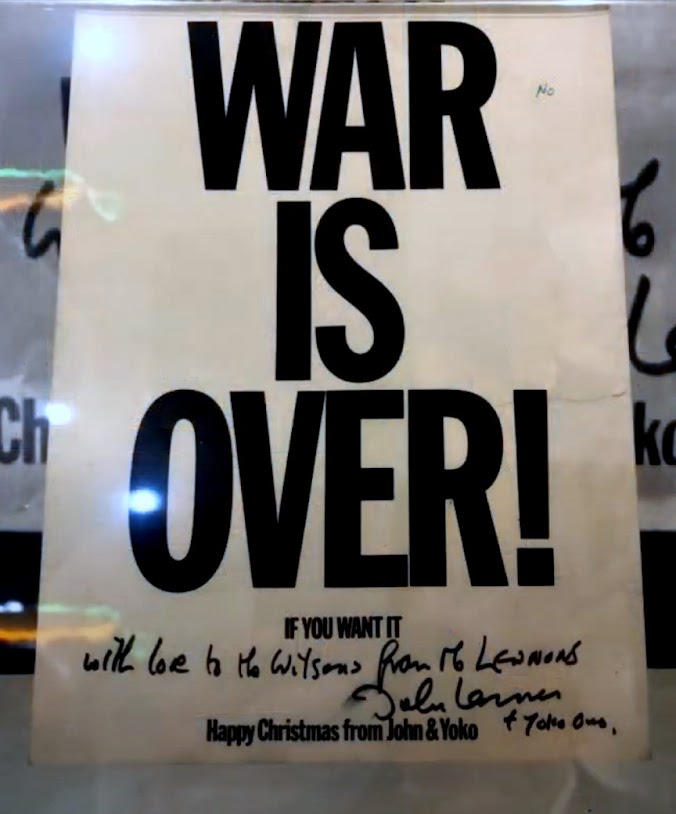 “There’s a little green ‘no’ on this card (see top right) which means he didn’t want to respond.”

Clearly Wilson no longer wanted to be associated with the moptops.

Mrs Ferenczy, now 81 and living in Spain, took the card home where it was displayed on a shelf, her daughter said.  Mrs Rowe added: It’s just been sitting on a shelf all my life, nobody else has seen it as far as I know. It’s literally gone from No 10 into our possession and it’s gone through lots and lots of countries, it’s been round the world because we lived abroad. One day we were looking at it, at home in Manchester, and just said why have we not shared this, somebody else needs to see it.

Tony Bramwell, originally from Hillfoot Avenue, Hunts Cross, was one of the few of the Beatles’ Liverpool gang who was with them from the start, initially working as an office boy for Brian Epstein at Nems and remaining with them through the madness of the Apple years, much of which Tony believes was of John and Yoko’s own making. 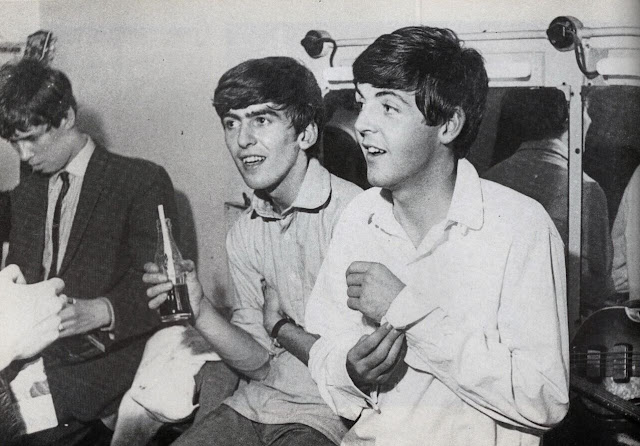 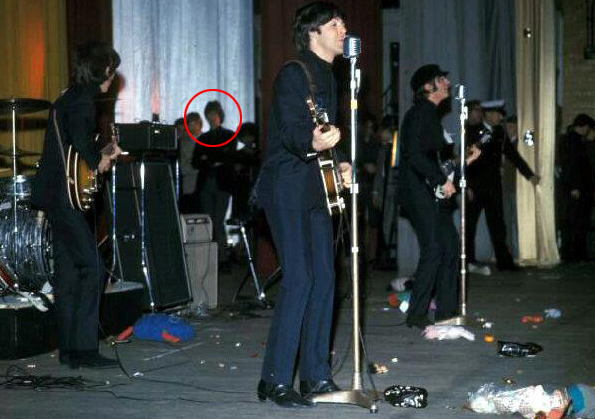 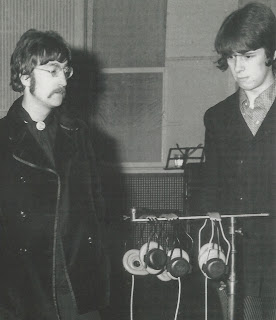 With John Lennon during the 'Sgt. Pepper' sessions, 1967. 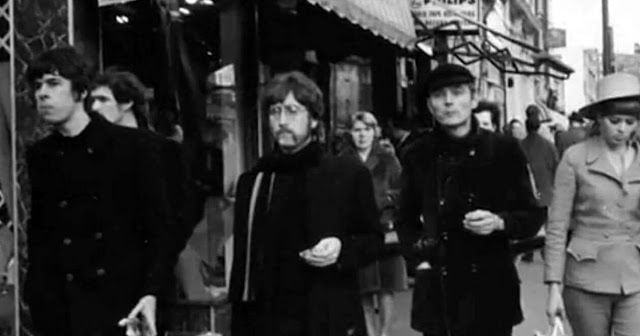 Tony (left) slightly covering Neil Aspinall, John and Peter Goldmann during the making of the 'Strawberry Fields Forever' promotional film (above) and sat with Paul and Ringo during a 1967 session (probably during the preparations for the 'All You Need Is Love' satellite broadcast). 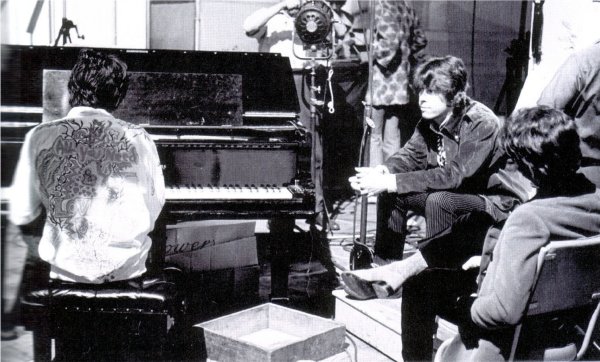 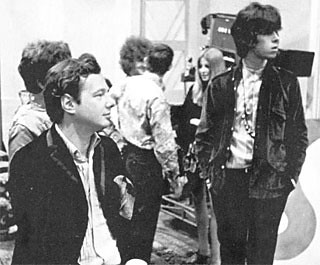 Tony during the preparations for 'Our World', June 1967, with Brian Epstein (above), and Tony King and Patti Harrison (below). The rag doll Patti is holding now lives in the Liverpool Beatles Museum and is visible in the cabinet over Tony's shoulder in today's photos. 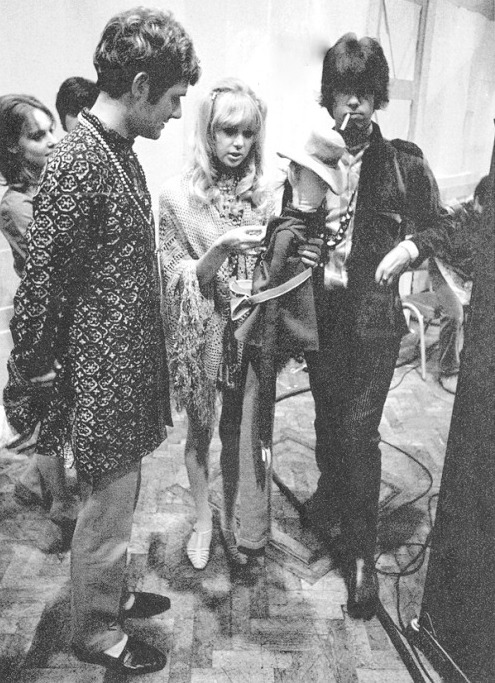 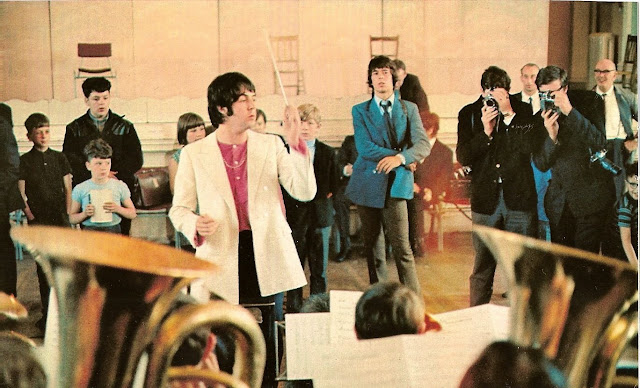 Tony (in blue) with Paul and the Black Dyke Mills Band in Saltaire, near Bradford, 30 June 1968. 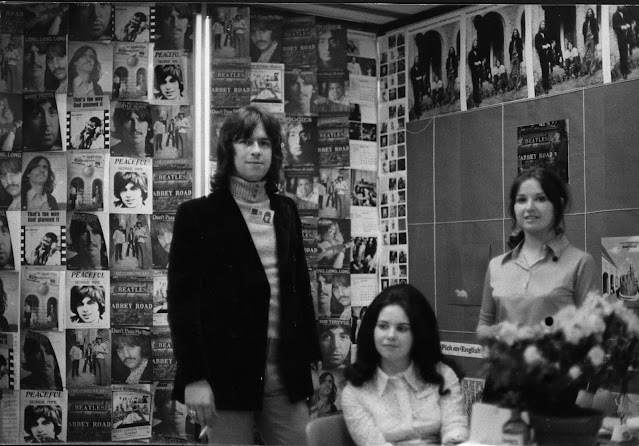 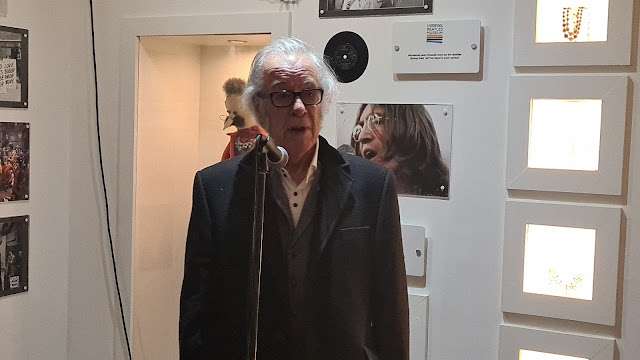 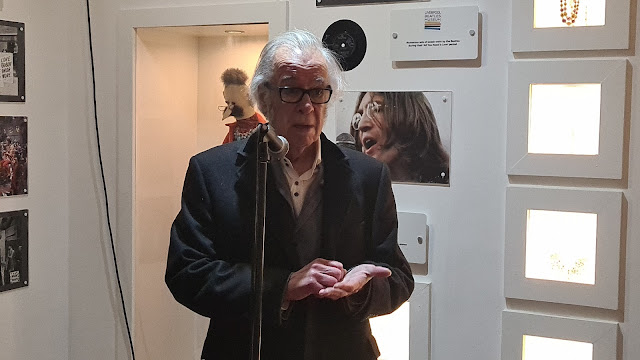 Before the unveiling special guest Tony Bramwell spoke to the specially invited audience. 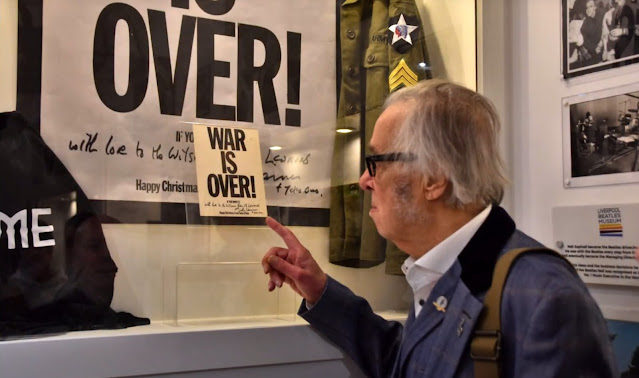 Tony told the Museum’s invited audience that as part of the War is Over! campaign he was tasked with organising for huge billboards bearing the slogan to be displayed at locations across the world, as well as sending out cards with the message on.

He said: There were thousands of those Christmas cards, we sent them to everybody in the address book. John and Yoko would send them specifically to people they wanted to wind up, well who John wanted to wind up and Yoko thought would bring world peace. Anything aimed at Harold Wilson was a dig. John had just sent back his MBE in protest.

Tony said that Mr Wilson (of 'Taxman' fame) had previously met The Beatles and posed with them for pictures but said he wasn’t surprised the politician had chosen not to respond to the card. In fact he would probably have said no even if he was offered a box of Beatles records. 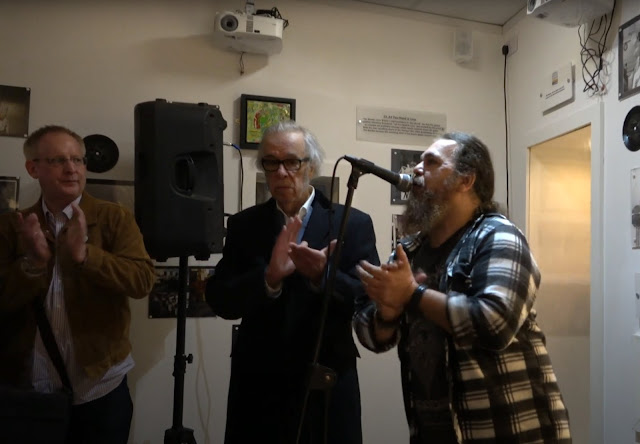 The card is the latest little gem to on display in the museum on Mathew Street, which houses one of the largest collections of Beatles memorabilia in the world. I can’t imagine what treasure might be unveiled next! 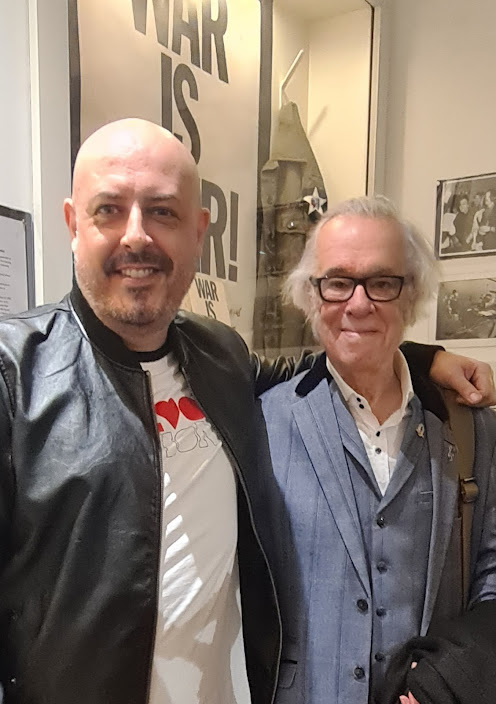 A great morning catching up with fellow fans, historians, and tour guides on the Liverpool Beatles Scene, many of them members of this blog’s Facebook group.

Oh yeah, Top Tip: When you take a book with you to get signed by the special guest at an event, it’s a good idea to take it out of your bag while you're still at the event! 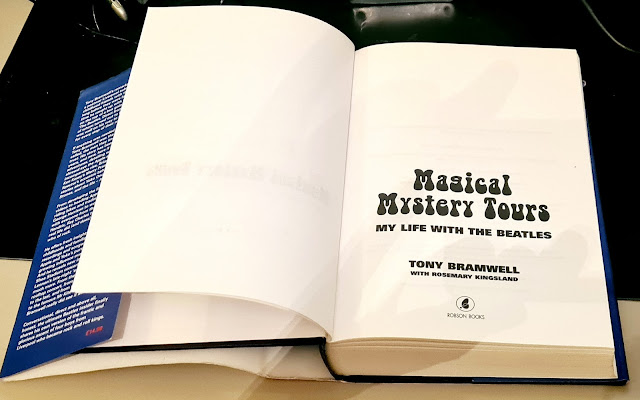 My treasured unsigned copy of Tony Bramwell's book.  Tony has a new book out soon which he promises contains even 'more shit'. One to put on your Christmas wish-list then.